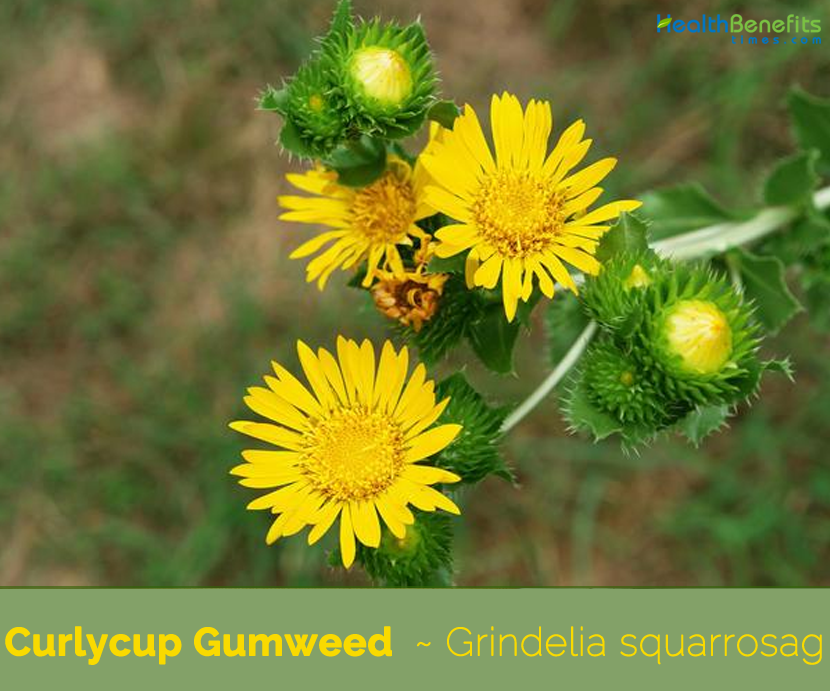 Curlycup Gumweed (Grindelia) scientifically known as Grindelia squarrosa is a small North American biennial or short-lived perennial plant which grows to a maximum height of 90 cm (appx. 3 ft.). The plant is native to western and central North America, from British Columbia east to Québec and New England, and south as far as California, Arizona, Chihuahua, and Texas. The plant belongs to the Asteraceae/Sunflower family. Few of the popular common names of the plant are curlycup gumweed, tarweed, resinweed, curly-top gumweed, sticky-heads, gumweed, Field Gumweed, Great Valley Gumweed, Rosinweed, Yerba del Buey, curly-top gumweed, rayless gumweed and broadleaf gumplant. The genus is named for Latvian botanist David Hieronymus Grindel, 1776–1836. It was used by Great Plains Tribes as a medicinal herb to treat illnesses such as asthma, bronchitis or skin rashes. The Lakota language name for the plant is pteíčhiyuȟa. The Gosiute Shoshone name for the plant is mu’-ha-kûm. The flower buds secrete sticky resin; hence the plant is also commonly called gumweed, gum plant, or tar weed.

Curlycup Gumweed (Grindelia) is a warm-season biennial or short-lived herbaceous, perennial plant that grows about maximum height of 90 cm (appx. 3 ft.). The plant is found growing in dry prairies, waste places, roadsides, railroads, depleted rangelands, and abandoned croplands. The plant does best in poor to fair on gravel, clay, and dense clay, and good in sandy loam, loam, and clayey loam.  It makes fair growth on saline soils, good growth on gentle and moderate slopes, and fair growth on steep slopes. It is tap rooted, and develops a short, vertical rhizome. The root system extends 6.5 feet (2 m) into the soil with extensive shallow root development. Stem is smooth, spreading to erect, usually single and branched above. The plant is both edible and medicinal and has been used in European and western herbology and in Native American medicine.

Flower heads are several to numerous with yellow ray florets up to 0.5 inches in length.  The floral disk is 0.6 to 2.75 inches wide.  Bracts of heads are resinous and strongly curled. Resin covering the flowers and flower buds are thick and milky and smell balsamic. Flowering occurs from July through September. Growth habit is erect with many branches coming off a single stem. Flowers are followed by achenes (like a sunflower seed).

Health benefits of the Grindelia

The herb has been used for thousands of years by Native Americans Indians. The herb is a natural muscle relaxant and as such has traditional been used for the treatment of asthmatic and bronchial conditions. In fact Grindelia was used by the medical profession in the United States from 1880 until 1960 to treat asthma and bronchitis. Listed below are few of the health benefits of Grindelia

The herb is an excellent expectorant that breaks up mucus. It is a natural remedy for the common cold and flu. That attacks children and adults alike from time to time.

This perennial herb greatly assists with addressing lung problems like bronchitis, emphysema and asthma. It achieves this by relaxing the air ways and consequently opening them up.

This allows for air to freely pass through the lungs of the patients. Additionally, it aids in the elimination of obstructions of catarrh and phlegm which are in the passageway so to improve breathing.

It is good for curing and managing coughs. This is mostly useful during the cold and dry seasons of the year when the development of coughs becomes widespread.

It’s recommended for calming the heart through decreasing the heart rate. It does this by reducing the sensitivity of nerve endings in the bronchial tubes. Hence, Grindelia soothes the nerves of users.

Grindelia is a potent antispasmodic compound that effectively quiets all cramping muscles. This property can prove to be useful to athletes that are prone to cramping muscles now and then.

Grindelia prevents the growth of poison oak. This is due to the calming effects that it has on the skin.

Like many resin-rich plants, Grindelia is an expectorant. It is useful for bronchial congestion, particularly with dry and stuck phlegm. Its anti-bacterial properties make it useful for respiratory infections and it soothes spasms and inflammation in the respiratory tract. It can be useful for spasmodic coughs, bronchitis, allergies and asthma. Being a warming expectorant, it is ideal for phlegm that lingers after the acute state of a respiratory infection. It also seems to be of value in sleep apnea.

Traditional uses and benefits of Grindelia

Grindelia is administered as an herbal infusion prepared by simply steeping a teaspoonful in one cup of boiling water. The herb should only be used in a dry form. Proper infusion of the herb should be allowed to take place for a period of approximately 10 – 15 minutes.

The cup of herbal infusion can be drunk three times on a daily basis to remedy several disorders. Alternatively, a 1-2 ml tincture should be taken thrice daily.