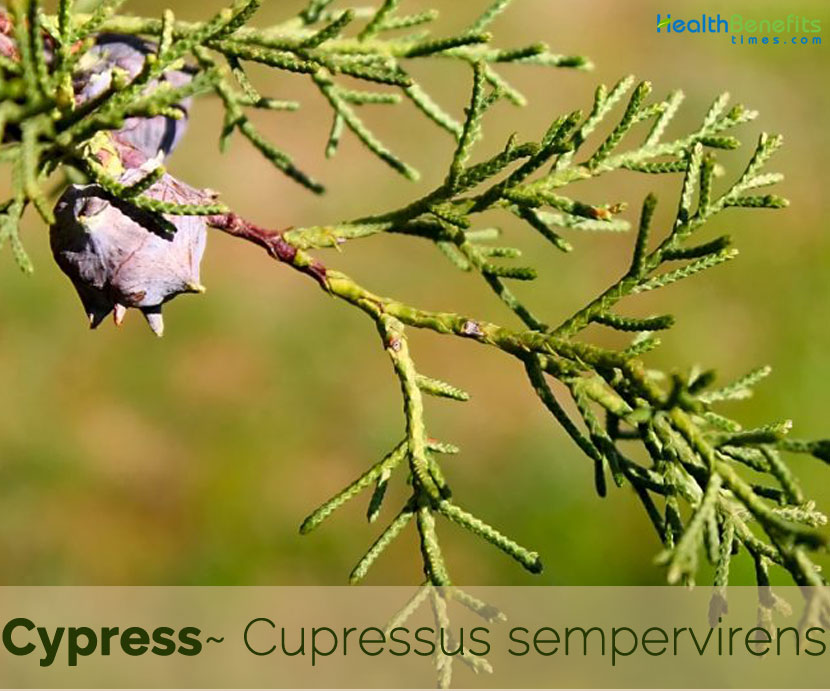 Common-cypress, Italian cypress, Mediterranean cypress, Pyramidal-cypress, evergreen cypress, graveyard cypress, Tuscan cypress, pencil pine, funeral cypress are few of the popular common names of the plant. Genus name is the Latin name for Italian cypress (Cupressus sempervirens.) Specific epithet means ever green. The term cypress has been derived from the old French word ‘cipres’ that was introduced from Latin ‘cyparissus’. While most species of cypress are trees, some are also shrubs. The tree has been planted as a timber crop in areas from the warm temperate zone to the tropics, often being grown in east Africa. It is widely grown as an ornamental.

Cypress is a medium-sized evergreen coniferous tree that grows up to 35-40 m tall with trunks of 1 m in diameter, rarely over 2 m with a conic crown with level branches and variably loosely hanging branchlets. It is very long-lived, with some trees reported to be over 1,000 years old. The plant is found growing in woodlands, interior valleys, and coastal mountains, disturbed areas along roadsides, gardens, parks and cemeteries. It thrives better than other species on rocky, dry and compact soils, even if it prefers rich, deep, moist and well aerated soil.  It is a pioneer species, growing quickly when young on most types of soils, including rocky and compact ones, adapted to the Mediterranean climate with dry and hot summers and rainy winters. It can form pure forests or be the dominant tree in pine forests or maquis vegetation. This cypress is widely planted as an ornamental tree, especially the columnar and conical forms, making a characteristic feature of the Mediterranean landscape.

The crown is very variable, from about as broad as it is tall with spreading branches, to the conical or columnar fastigiated form (known also as Italian cypress). The plant has large shallow root system. Bark of the tree is thin, smooth and gray for quite a long time, later becoming gray-brown and longitudinally furrowed. The foliage grows in dense sprays and closely pressed against the twigs. It is dark green in color. The leaves are scale-like, 2–5 mm long, and produced on rounded (not flattened) shoots.

Flowers appear in early spring and may occur on 3-6 year old plants. The cypresses are monoecious wind-pollinated plants. The male flower is cylindrical, 3-5 mm long, yellow when ripe. Pollination occurs from mid-winter to early spring. The female flowers are brownish-green and globose, ripening after one year into brown-grey woody cones, ovoid-shaped, 2-4 cm long, composed of 8-14 opposite scales. Seeds are 8-20 per each scale, brown and narrowly winged, 3-5 mm long, releasing in autumn-winter. 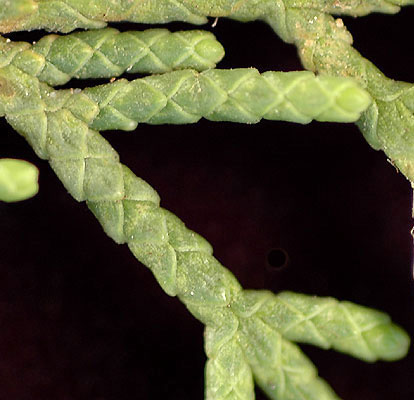 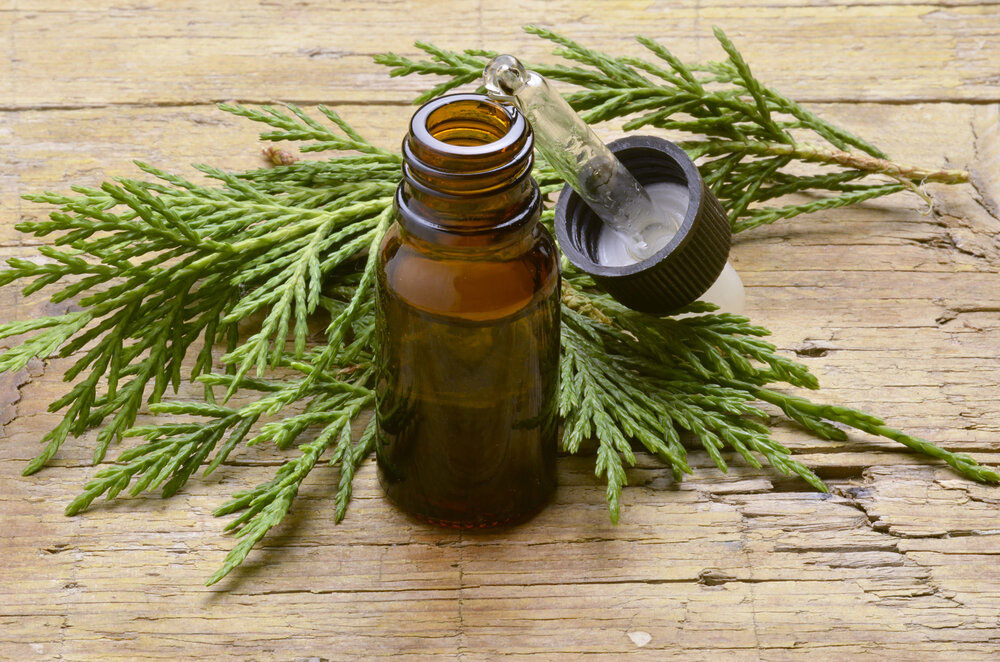 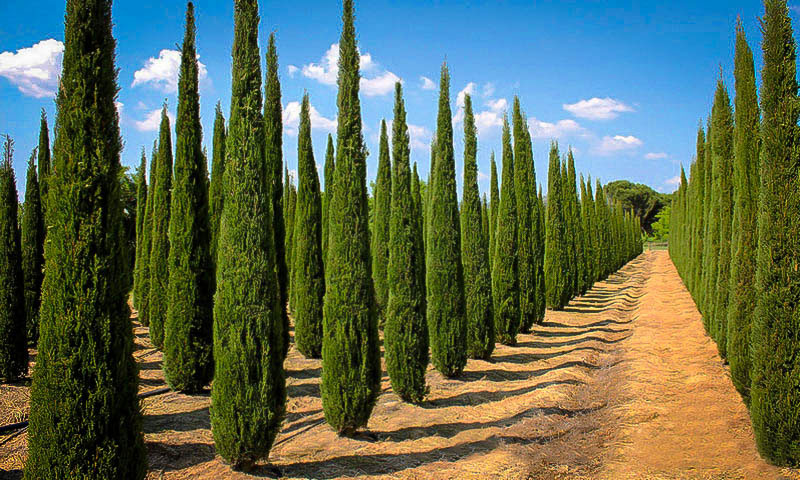 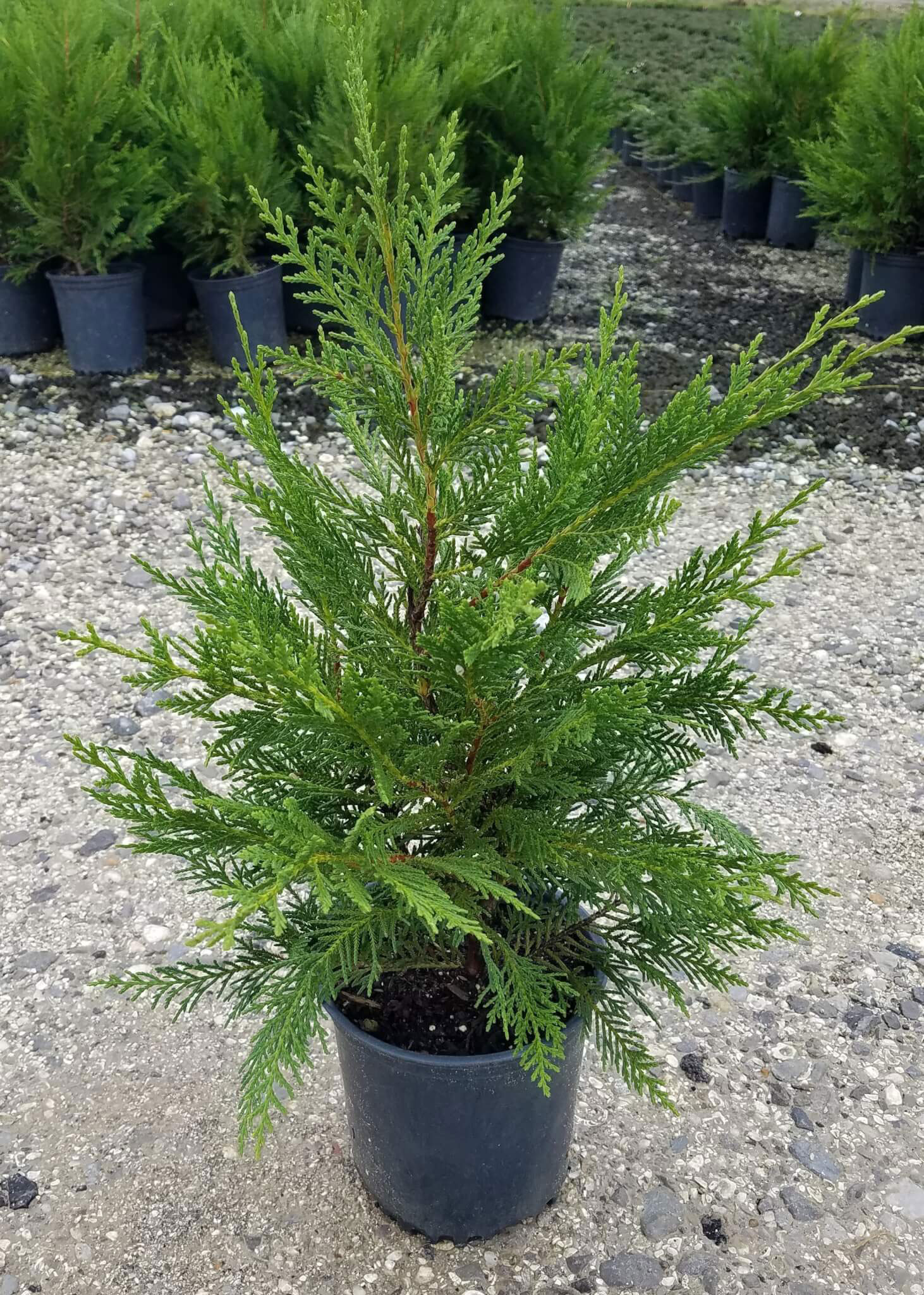 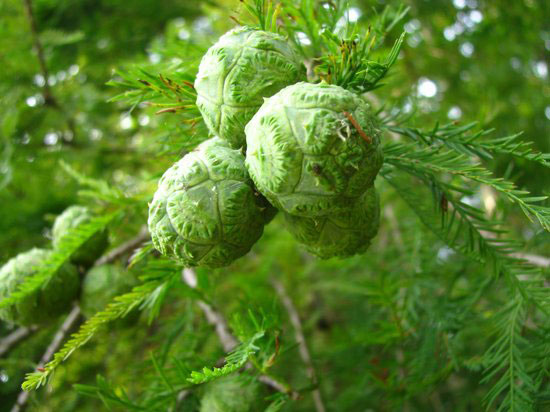 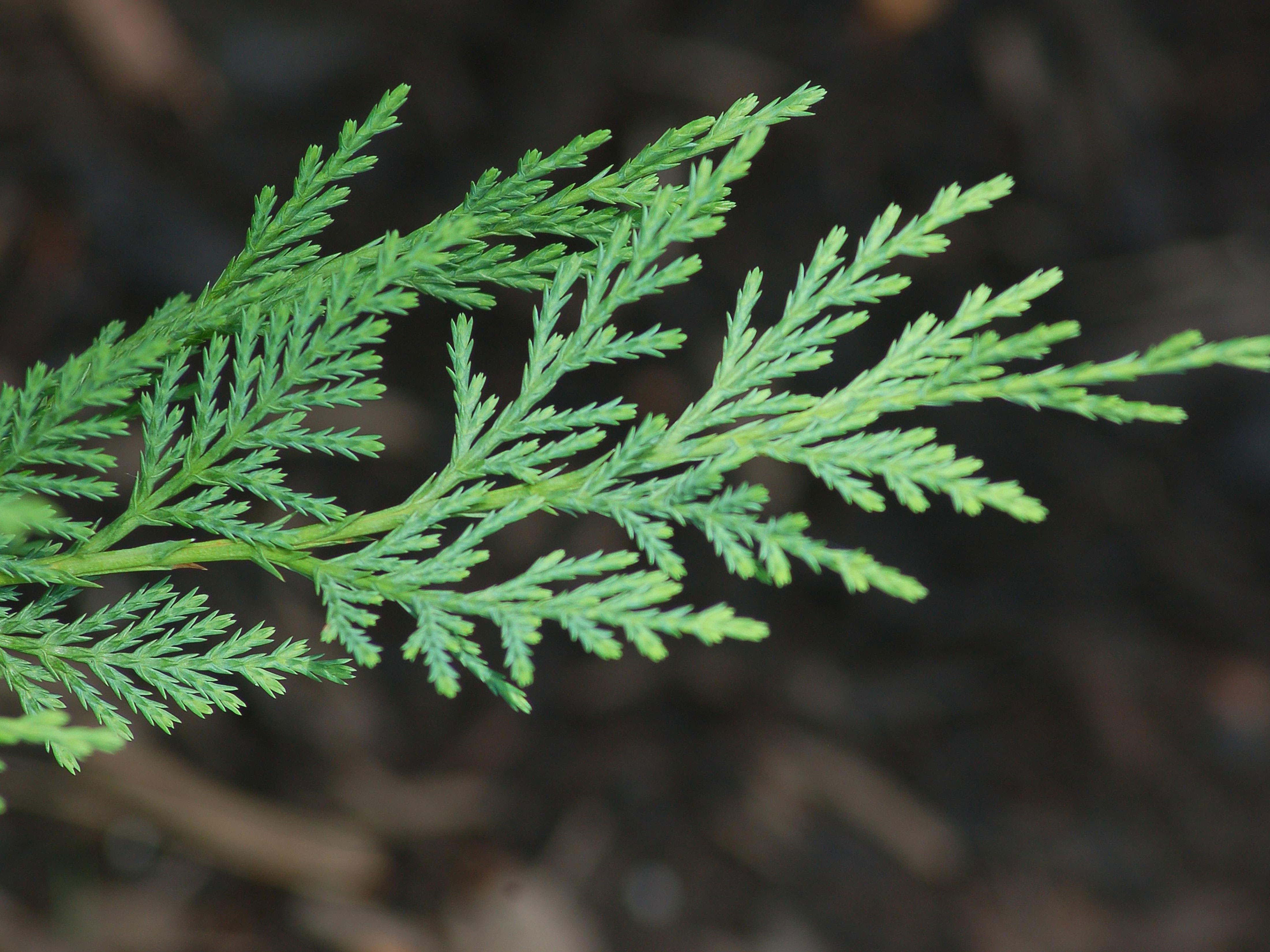 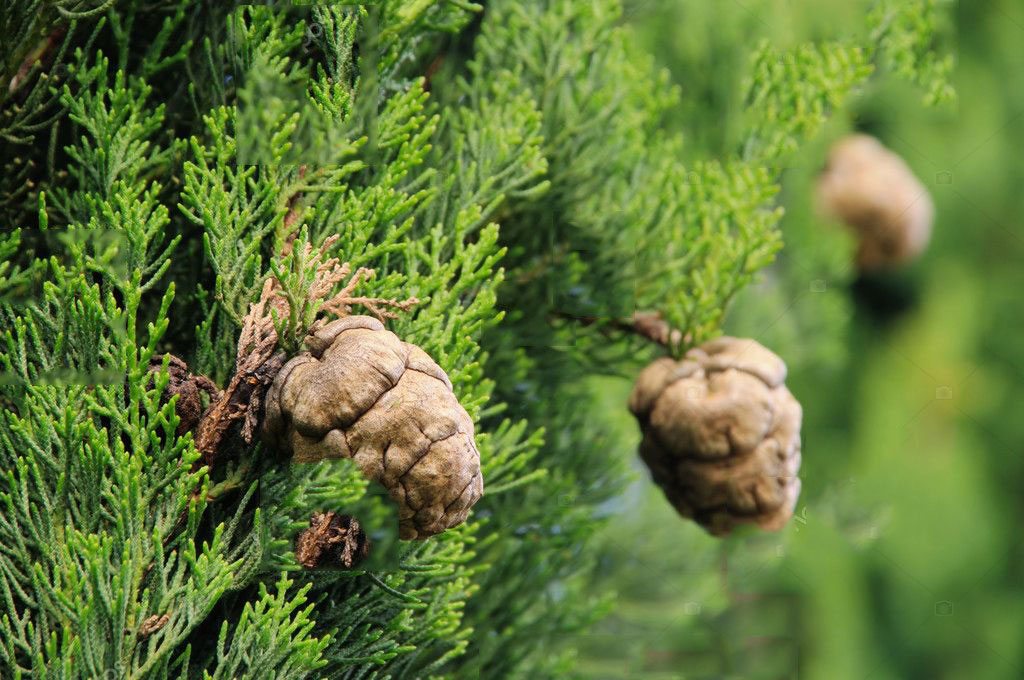 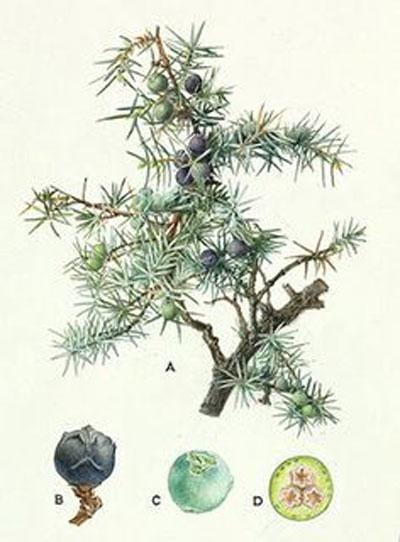 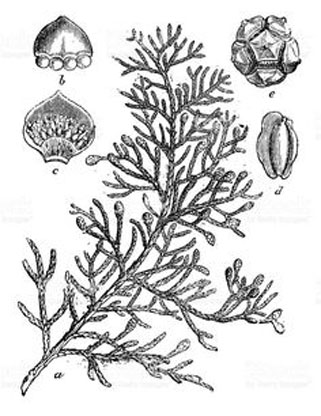 Cypress is part of the Cupressaceae plant family, which is comprised of a wide array of trees native to various parts of the world. Some of the more well-known of these trees is the coastal redwood and giant sequoia. The essential oil that comes from the needles is very well-known and important, but concoctions can also be made from the needles and cones to treat various health issues. Listed below are some of the well-known health benefits of cypress

Cypress when consumed as a tea decoction or applied directly as a topical solution it can reduce inflammation internally and externally. If you suffer from arthritis, gout, or other inflammatory muscle conditions, it can help to relieve the discomfort and pain. Additionally, it can help to soothe the organ systems that may be inflamed by infection or nutrient deficiency, allowing the body to recover more quickly. Salve can also be applied to hemorrhoids to reduce inflammation and eliminate pain.(1)

Cypress essential oil is commonly used for aromatherapy in relation to respiratory issues, but a simple tea decoction of the needles can also deliver an effective respiratory remedy if you suffer from asthma, bronchitis, nasal drip, chronic congestion, or any other inflammation of the respiratory tracts. This should only be consumed on a limited basis, as the powerful chemical components of the tea should not be overused. (2)

Though the exact pathway of this remedy is not completely understood, cypress needles and decoction have been used to eliminate varicose veins for many years. Traditional medicine strongly supports its use, although the modern medical community has not confirmed this particular application.(3)

Acne is a severe skin condition which affects millions of people around the world, but over the centuries, traditional remedies have become some of the most relied solutions for this widespread problem. Create a salve out of a decoction of needles and carrier oil, can be applied to the skin to prevent bacterial infections (which acne is caused by) and reduce the inflammation and swelling of the sebum glands that can worsen acne. Additionally, these cypress salves are commonly used to speed wound healing and reduce the appearance of scars and blemishes on the skin.(4)

One of the most popular applications of cypress is as a foot bath. By placing the cones in a hot water bath, many of the beneficial organic compounds of the plant are released into the water, and can considerably boost the health of your feet. Extremities are prime locations for fungal and bacterial infections, and cypress can stop your feet from sweating, which is a major cause of fungal infections like Athlete’s foot. Prevent that condition with cypress foot baths, particularly if you are prone to being on your feet or wearing shoes for extended periods of time. (5)

When the decoction is applied to the hair and scalp, it can encourage healthier follicle beds and glands, resulting in stronger, richer hair that is less prone to damage and maintains its rich luster. It can also help to reduce dandruff by preventing the skin from drying out.(6)

Traditional uses and benefits of Cypress