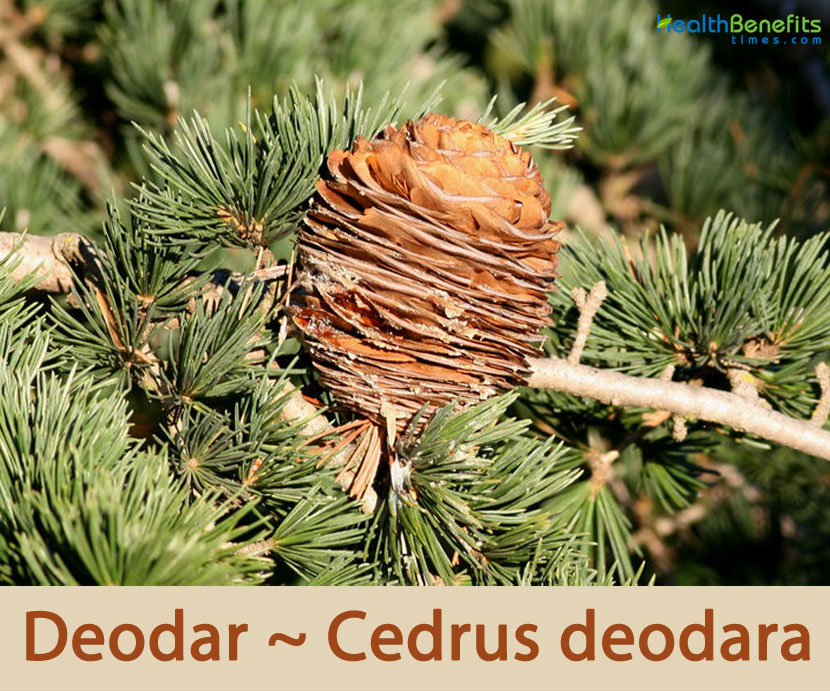 Cedrus deodara, popularly known as deodar, Himalayan cedar or deodar cedar is a species of cedar belonging to Pinaceae (Pine family). The plant is native to Afghanistan, Tibet, Nepal, Pakistan and India (Himachal Pradesh, Uttarakhand, Jammu-Kashmir and Uttar Pradesh). It is massively found in the north-west Himalayas from Kashmir to Mussoorie. It grows at altitudes of 1,500–3,200 m (5,000–10,000 ft.). In Sanskrit scripts, it is stated as the tree that grows in the place of Gods. Some of the popular common names of the plant are Deodar, Deodar cedar, Himalayan cedar, cedar, Devadara, Beyar, Devadarm and Devdar. The botanical name of the tree is derived from the Sanskrit devadaru (Dev=Gods, Dar=wood), which means wood of the gods.

The generic name Cedrus is derived from the ancient Greek name for the coniferous tree; in another opinion the name is derived from the Greek word kedron, a river of Judea. The specific epithet deodara is derived from Sanskrit devadaru, refers to tree of the gods or timber-of-the-gods; another opinion suggests that the word Deodar is derived from a historical Indian state. Since Himalayan cedar is the national tree of Pakistan, it is a very important timber tree in Pakistan, Kashmir and NW India. Its strong and durable wood is mostly used for construction. The plant is also harvested from the wild for medicinal use. It is occasionally cultivated for timber in some parts of southern Europe and is also grown as an ornamental – there are several named forms, some of which are dwarf-growing and suitable for smaller gardens.

Deodar is an elegant, large, ornamental, evergreen, dioecious, coniferous tree that is pyramidal when young, maturing to flat-topped trees with broad-spreading horizontal branches. It is perhaps the most pendulous of the true cedars, with drooping branchlets and branching that is gracefully drooping at the tips. Lower branches typically remain on the tree as it ages; often touching the ground. The plant normally grows about 40-50 m tall, exceptionally 60 m, with a trunk up to 3 m diameter. The plant thrives on most soils, being very tolerant of dry sites and of drought when it is established. It succeeds in very chalky soils and prefers a rich loam or sandy clay in full sun. Bark is greyish brown, dark, almost black, with vertical and diagonal cracks dividing it into irregular oblong scales. Twigs are slender, with numerous short spur shoots, branches droop with age; buds are very small and round.

The plant is monoecious. Male flowers are solitary and erect catkins, pale green to yellowish green with purplish tinge, oblong, ovoid, and 2.5 to 4.6 cm long and 1 to 1.5 cm in diameter. On opening they elongate rapidly to 5-7.5 cm in length and become yellow with pollen. The female flowers are solitary and erect at the end of arrested branchlets; flowers, at the time of pollination, are oblong, ovoid, 1.2 to 2.0 cm long and 0.6 cm in diameter, pale glaucous green. The scales occur in a spiral of 8 x 5; at the time of pollination they stand perpendicular to the axis, exposing ovules and close after pollination. Flowers appear in between September and October.

Cones solitary or in pairs, erect, ovoid or ellipsoidal, 7.5-12 cm long and 5- 8.7 cm in diameter with numerous fan-shaped scales arranged in spiral of 8 x 5 on persistent woody central axis, rounded at the apex. It is bluish when young, reddish-brown when ripe. Fruit starts maturing from September to November and the seed shed from September to December. Seed scales are 5-6 cm wide, usually glabrous on the upper side. On each scale rests a pair of winged seeds. Seed are triangular, winged, 2.5 to 3.7 cm long; wings with rounded corners and 2- 2.5 cm broad. 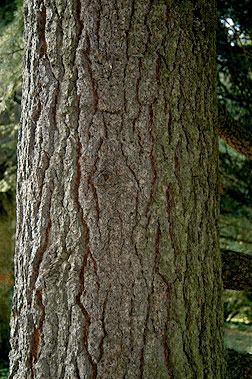 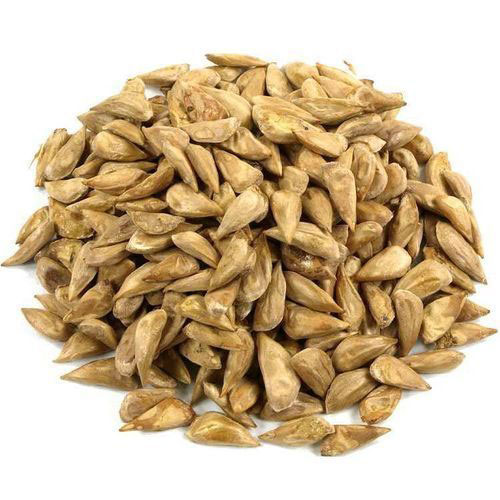 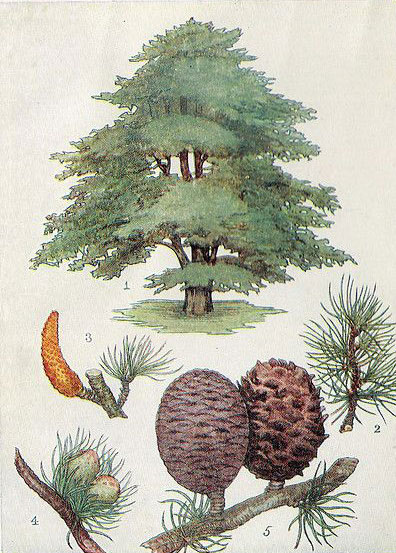 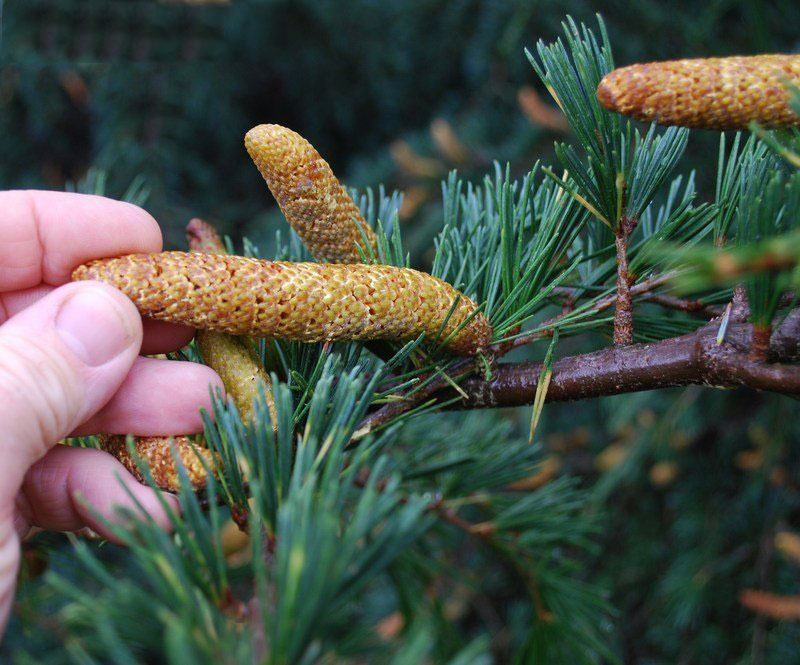 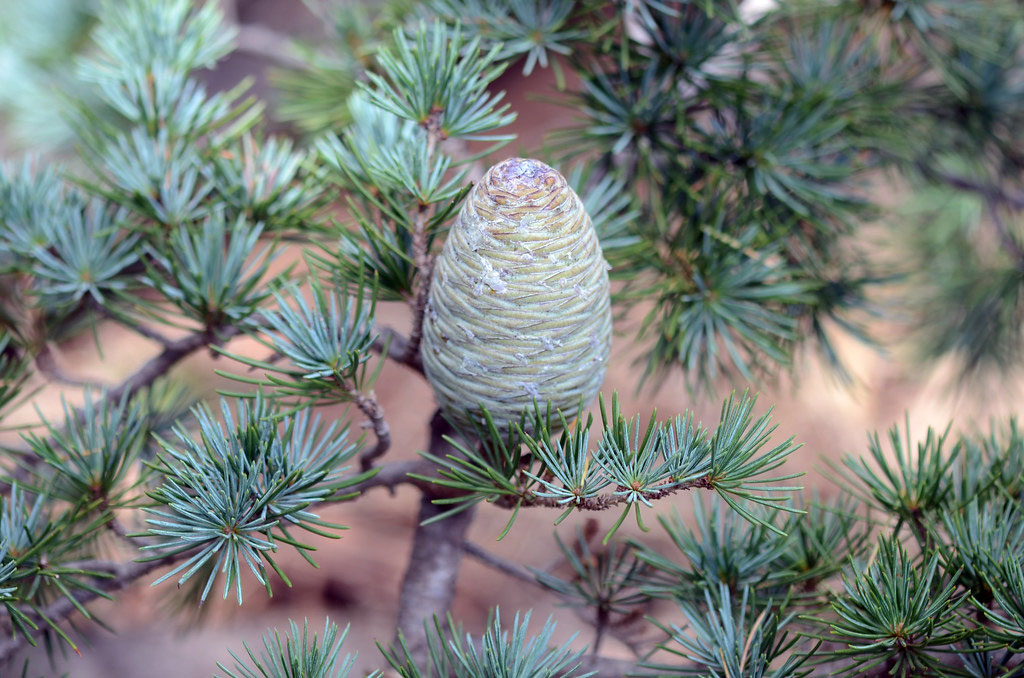 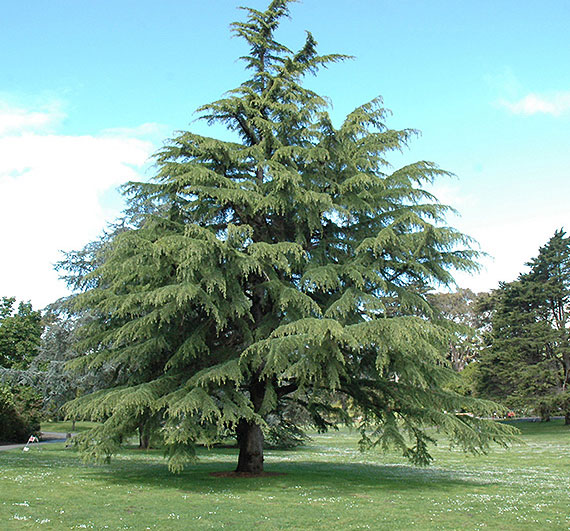 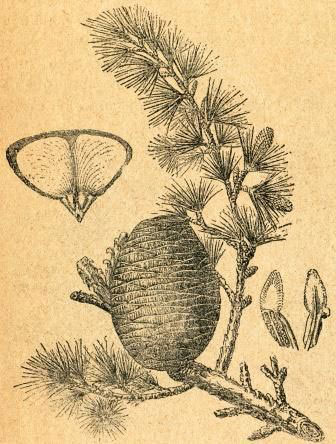 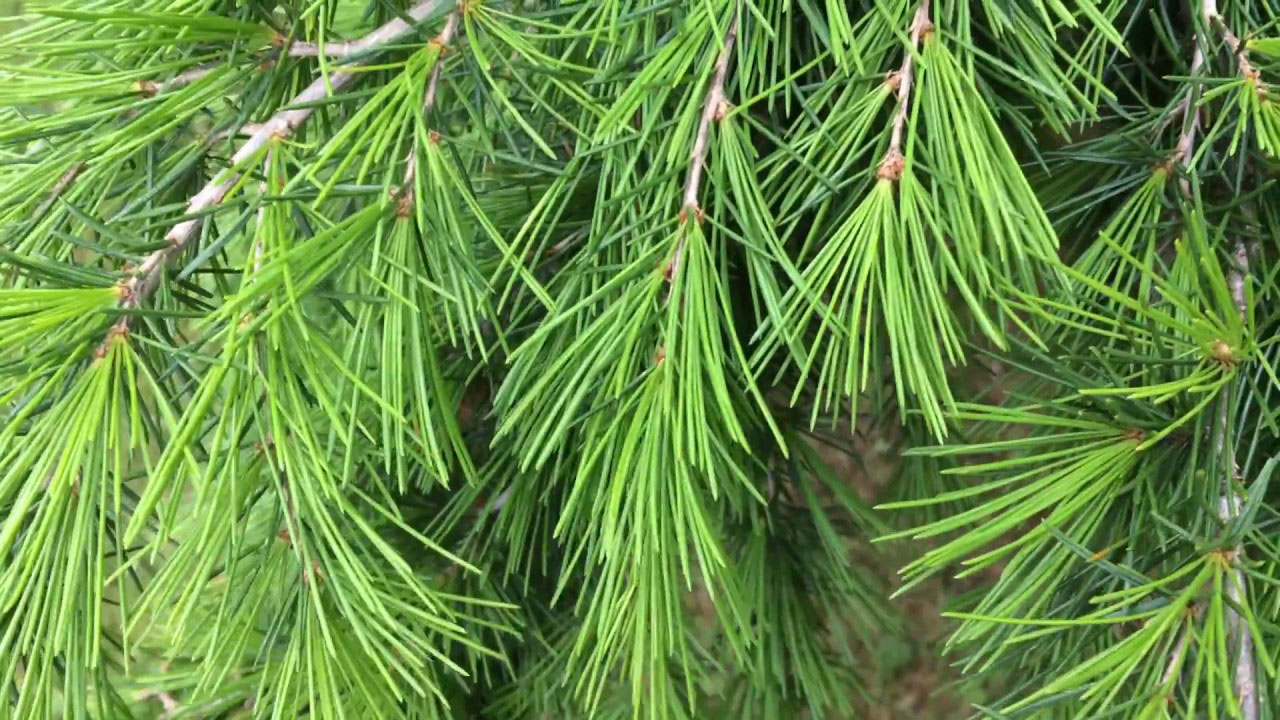 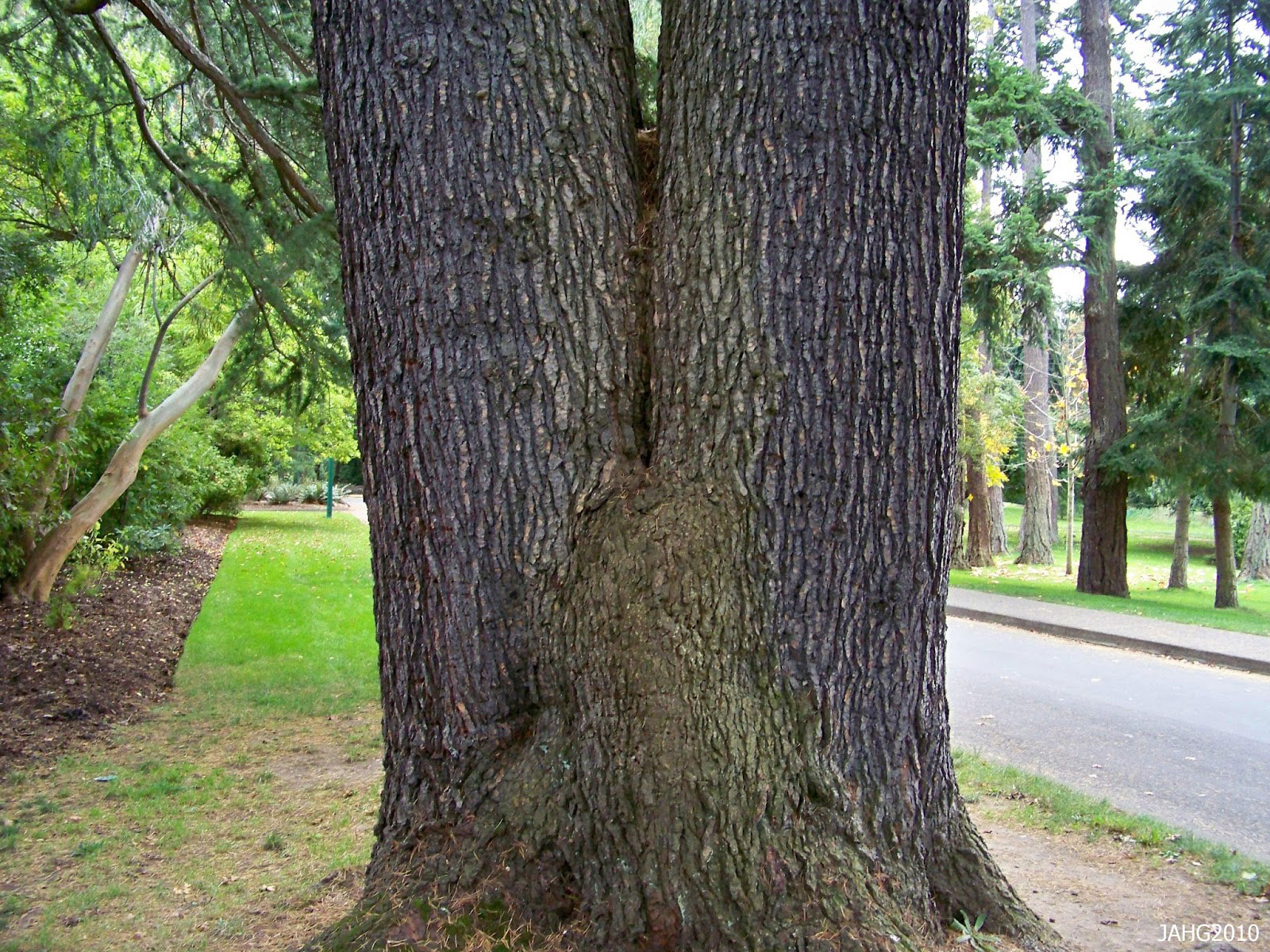 Since ancient times, deodar plants have been used extensively in Ayurvedic medicine. Moreover, all parts of this tree like heartwood, leaves, bark, oil, resin, etc. have numerous types of medicinal benefits and antiseptic properties. Listed below are some of the valued benefits of Deodar

Accumulation of mucus in the airways may cause cold-related cough. Deodar helps to reduce cough by effectively removing mucus from the airways, and it is also extensively recommended in the treatment of tuberculosis. Consuming the mixture of Deodar powder and hot water also help to cure cough. Apart from that mix 1 drop of Davana oil with 1 drop of cedarwood oil in warm water and inhale its vapor to expel mucus from the trachea. Thus inhalation of vapor cures sinusitis, colds, fever, and cough.

Traditional medicine use deodar to treat viral fever and acute fevers. Inner bark of the deodar tree are finely powdered, and prepare decoction by boiling this bark powder in water or by adding some other herbal products with deodar bark powder. By consuming this distilled water for fever you can also gain energy and stability.

Epilepsy is considered one of the most common disorders of the central nervous system, mostly affecting brain function and result in sensations, seizures, and loss of awareness. Deodar extract can significantly reduce the nature of epilepsy and its effects and helps in curing it over time.

Additionally, the alcoholic extract derived from the hardwood of Deodar greatly helps to regulate the levels of Kapha found in the nervous system, thus providing the body with antidepressant properties. Himalayan Cedar oil is very helpful in balancing the Vata dosha which is the main cause of various neurological disorders. Deodar oil is used to treat all nerve-related problems including stroke, nerve pain.

Mild carminative and digestive properties of the Deodar helps to cure all the problems relating to digestive system. Anti-flatulent property helps to reduce the formation of gas in the alimentary canal, thus reducing flatulence, bloating, constipation, and abdominal distension. Similarly antacid property of the herb prevents the formation of excessive acids in the stomach thus treating indigestion, ulcer, and gastritis and promotes better absorption of nutrients in the body. Additionally, it improves the peristaltic movements of the gut and helps in complete removal of stools and prevents the formation of Ama.

Arthritis is caused by the severity of the maximum Vata that gathers in the body, causing swelling, pain, and difficulty in movement. Deodar tree extract has strong anti-inflammatory properties and is used to treat arthritis. Extract also has the feature of balancing the Vata and provides relief for body aches and joint pains caused by arthritis. Heartwood oil prevents leukotriene synthesis and helps stabilize mast cells. In addition, Deodar can help relieve erections in cervical spondylosis.

Oil extracted from the Deodar plant is rich in anti-allergic and anti-inflammatory properties. This oil when applied topically helps to treat wounds and pruritus. Apart from that its oil consists of two types of chemical compounds called Benzyl Benzoate and OCD, which kill active acaricides and effectively kill parasites and germs. Similarly, its oil is effective against Sarcoptes skin infections, including psoriasis, scabies, and eczema.

Mix Deodar, Guggulu, and Turmeric well and apply the paste to intolerant swellings. This combination is also recommended for use in the treatment of leprosy, and fungal skin infections.

Deodar is the most important ingredient in vegetable oil and is used to treat asthma and shortness of breath due to its anti-allergic properties. Since it consists of allergens it is used to treat hiccups, sinusitis, and runny nose.

Toxins and impurities in the body and blood are excluded by ingesting Deodar bark powder or extract orally. When taken internally it can effectively improve liver function. Deodar is considered an excellent cure for vascular disorders, excessive bleeding, and infections in the blood such as sepsis.

Topical formulas made with Deodar are very effective in treating back pain after childbirth and during menstruation. Additionally, its juice is taken orally to relieve back pain and strengthen the spinal cord.

When Himalayan cedar bark’s extract is taken regularly, it strengthens the uterus and improves our health. When taken internally, some of the active compounds present in it stimulate the release of eggs from the ovary. This spontaneous process can effectively treat uterine dysfunction, amenorrhea, leucorrhoea, anovulation and dysmenorrhea.

Unhealthy eating habits and delicate lifestyles are primary causes for weight gain, which can lead to poor digestion and various diseases. Deodar wood helps to reduce obesity by helping to expel excess fat and triglycerides deposited in the body.

Similarly antioxidants in Himalayan Cedar help greatly in reducing the toxin called Ama and improving the metabolism. All these processes are carried out by their digestive properties called Pachan and appetizer properties called Deepan.

Essential oil obtained from Deodar, plays a significant role in discomforting off stress and eliminating various symptoms of anxiety like uneasiness, restlessness, cold hands, and feet, etc. Calming and grounding properties of the plant also actively help to uplift the mood and promote feelings of hope and joy.

Alopecia areata is a term used to describe the circular baldness or occurrence of sudden hair loss in both men and women. Deodar oil is a good natural medicine with no side effects to cure alopecia and control hair loss. This oil cures scalp irritation, excessive dandruff, hair loss, etc. and promotes healthy hair growth.

Deodar is beneficial in osteoarthritis. Osteoarthritis may cause pain, swelling and difficulty in moving. It has Vata balancing property and gives relief from the symptoms of osteoarthritis-like pain and swelling in the joints.

Due to its potent anti-inflammatory, anti-biotic, and anti-asthmatic properties, Deodar helps in treating a host of respiratory troubles.  It is extensively used for treating the common cold, sore throat, cough and flu symptoms. It also thins and loosens the rheum particles within the chest and nasal cavities and therefore eases breathing and helps the body to get rid of mucus. It is also beneficial in treating bronchitis and asthmatic conditions.

Abundance of flavonoids in Deodar helps the body shed excess weight faster. Due to the presence of fiber and anti-obesity action, Deodar satisfies sudden hunger pangs and prevents overeating and thus plays a pivotal role in one’s weight loss regimen. The herb also improves metabolism and helps the body to maintain a proper weight.

Deodar is an ancient and traditional remedy to increase the functioning of the brain. Antioxidants present in the bark improve the memory capacity, focus, concentration, calmness, alertness of an individual. Several research conclude that people taking deodar in powdered or decoction form regularly, have improved memory, reasoning, problem-solving, and other cognitive abilities. It also helps in treating epilepsy, memory loss, stress, anxiety, depression, Alzheimer’s and other neuro-degenerative disorders.

Traditional uses and benefits of Deodar