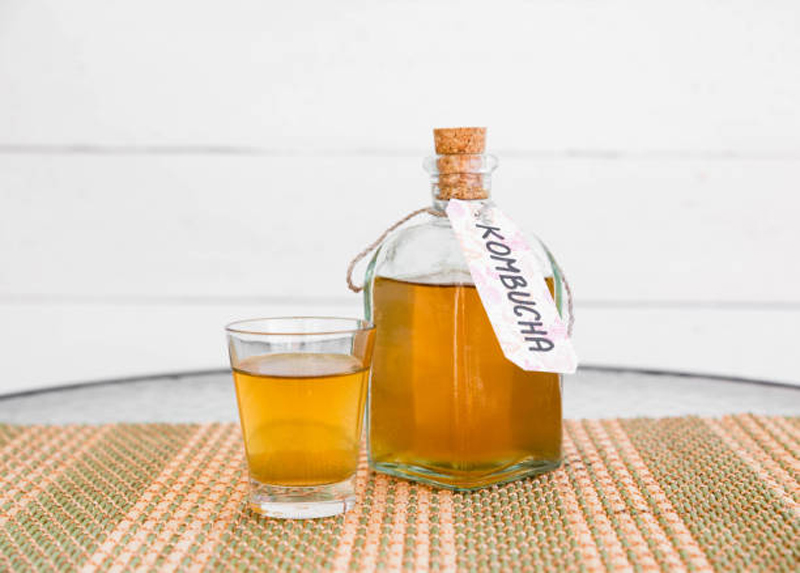 Chances are good you have heard of kombucha, but do you know about all of its incredible health benefits? For starters, kombucha has been brewed for thousands of years. It’s flavor is tangy and sharp, and not only does it offer the many health benefits of drinking tea, it also offers many of the best aspects of consuming probiotics.

On top of that, kombucha contains antioxidants that have shown evidence of being able to kill harmful diseases.

If you are interested in heading to the grocery store and picking out a handful of kombuchas, here are some of the best evidence-based health benefits of kombucha that you should know about!

Kombucha is packed with probiotics

It is believed that Kombucha originated in either China or Japan and while the creators of it probably did not know about probiotics, they were certainly getting the benefits. Kombucha is created by using green or black tea and introducing a symbiotic culture of bacteria and years – or SCOBY – to an airtight jar. To find more ways of using Kombucha tea, you can explore right here.

Then, you allow the tea to ferment. During the fermentation process, bacteria and yeast produced acetic acid and several other acidic compounds. Trace levels of alcohol are also found in kombucha as is gas, making it carbonated and fizzy.

Kombucha drinks contain several different species of lactic acid bacteria which can help provide your gut with the healthy bacteria it needs to function at its best.

Probiotic bacteria are known to help improve crucial aspects of health such as digestion, reducing inflammation, and increasing your digestive system’s ability to suck all the nutrients out of the food that you eat.

Did you know that green tea is considered to be one of the healthiest beverages on the planet? The reason why is because green tea contains compounds known as polyphenols which help by providing the body with strong antioxidants.

Many types of kombucha are made using green tea, which means that on top of probiotic health, you are also increasing the levels of antioxidants in your body.

Studies have shown that drinking green tea regularly can increase the number of calories you burn, reduce belly fat, and improve cholesterol levels.

It may also help reduce the risk of prostate, breast, and colon cancers.

Antioxidants are known as important substances that reduce oxidation in the body and fight free radicals, which are reactive molecules that can damage your body’s cells.

Scientific studies that have used rats as subjects have found that kombucha regularly reduces liver toxicity caused by toxic chemicals in at least 70 percent of cases.

While there have been no human studies to take place on this matter, it does seem like a very promising line of research when it comes to liver health.

One of the main aspects of kombucha that helps encourage the necessary fermentation process is the acetic acid. This acetic acid is believed to have a great ability to kill unhealthy bacteria that finds its way to your body.

As previously mentioned, kombucha is made from either green or black tea and is believed to be especially powerful when it comes to fighting off infection-causing bacteria and Candida yeasts, which are a major contributor to vaginal yeast infections.

These antimicrobial effects help by suppressing the growth of unhealthy bacteria and yeast in the body. Even better, they don’t hurt the trillions of beneficial bacteria that live within your body and make up your microbiome.

Kombucha may help reduce the risk of heart disease

Did you know that heart disease is the leading cause of death across the United States? Lifestyle, diet, stress levels, and more help contribute to heart disease risk, and kombucha may actually reduce the risk.

Rat studies have shown that kombucha can dramatically improve two major markers of heart disease risk. Those two markers are “bad” LDL and “good” HDL cholesterol. In fact, kombucha may be able to improve the status of these two indicators in as little at 30 days.

On top of that, green tea helps protect LDL cholesterol particles from oxidation, which is believed to be a contributing factor to heart disease.

In fact – green tea drinkers, and by association kombucha drinkers, have up to 31 percent lower risk of developing heart disease later in life.

Type 2 diabetes impacts over 300 million people across the globe. The major characteristics of diabetes are high blood sugar levels and an unhealthy – potentially deadly – resistance to insulin.

One study of diabetic rats found that kombucha may help slow the digestion of carbohydrates, that in turn reduced blood sugar levels in the body.

Just like much of this article, the health of kombucha when it comes to diabetes may come from the fact that it is made from green tea. In fact, a review study (which is a compilation of data from a number of different studies) of almost 300,000 individuals found that green tea drinkers had an overall 8 percent lower risk of becoming diabetic.

Kombucha may even help protect against cancer

Another major cause of death in the world is cancer. Cancer is of course characterized by cell mutation and uncontrolled cell growth.

In test-tube studies, kombucha was found to help prevent the growth and spread of cancer cells thanks to its high concentration of antioxidants and polyphenols.

While the polyphenols’ anti-cancer characteristics are not yet fully understood, it is believed that they have a positive impact.

Overall, kombucha is a delicious and healthful drink that can be a part of trying to improve your health. If you are interested in finding the right kombucha brand and flavor for you, just head to your nearest grocery store and see what they have to offer!