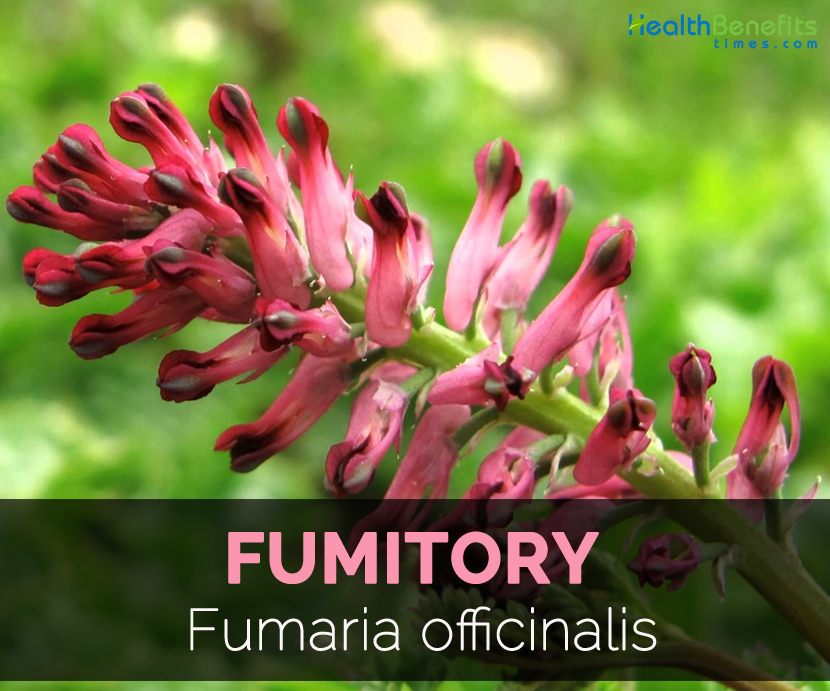 Fumitory is an annual growing plant that grows as a low and trailing shrub with gray and pointed leaves. The plant beans pink to purple flowers in spring. This plant has got various common names such as Earth Smoke, Beggary, Hedge Fumitory, Fumus, Wax Dolls, Vapor, Common fumitory, Drug fumitory, Earth smoke and Earth-smoke. Fumitory is inherent to Mediterranean region, Northern Africa, Siberia and Europe. It is also introduced to South and North America. It has got naturalized in China, Canada, South Africa, the United States, Australia and South Africa.

Fumitory is occurred as a weed in waste places and arable land of Western Siberia, Europe and Western Asia. It is also found in Finland, Sakhalin Island, Tasmania and New Zealand. It is regarded as serious weed in Tunisia; whereas common weed in England, Bulgaria, Turkey and Russia; and as a cereal weed in France, Chile, Italy, Greece, Germany, Portugal, Yugoslavia and South Africa. Fumitory is considered as weed in other 45 countries.

The plant of Fumitory has thin stems and assorted branches which supports gray to green hued leaves. Leaves are split into triangular shaped jagged leaflets. At the terminal of branches, flowers appear in tube shaped, purplish to pink with crimson tips. Flowers blooms from May to September. Flowers are 7-9 mm in diameter having two lips. Flowers then turn to a fruit as achene which possess single seeds. Fruits are comprised of high content of compounds such as alkaloids, tannins and salts of potassium which are beneficial for human health. It is also rich in fumaric acid. The plant could be easily recognized with the presence of angled stems, pink flowers and delicately split leaves.

This plant measures 10 to 50 cm in height having erect, tender, branched, angular, glabrous and hollow stem. The alternate leaves are bluish green which is divided into three pinnate sections.

Fumitory is found in the cultivated soils of America and Europe. In early 13th century, this plant was known as fūmus terrae which means smoke of earth. Dioscorides wrote in De Materia Medica and Pliny the Elder in Naturalis Historica, two thousand years ago that the sap or late of the plant if rubbed to the eyes causes tears like an acrid smoke. It is known as kapnos in Greek.