Trending
You are at:Home»Herbs and Spices»Traditional uses and benefits of Gallant Soldier 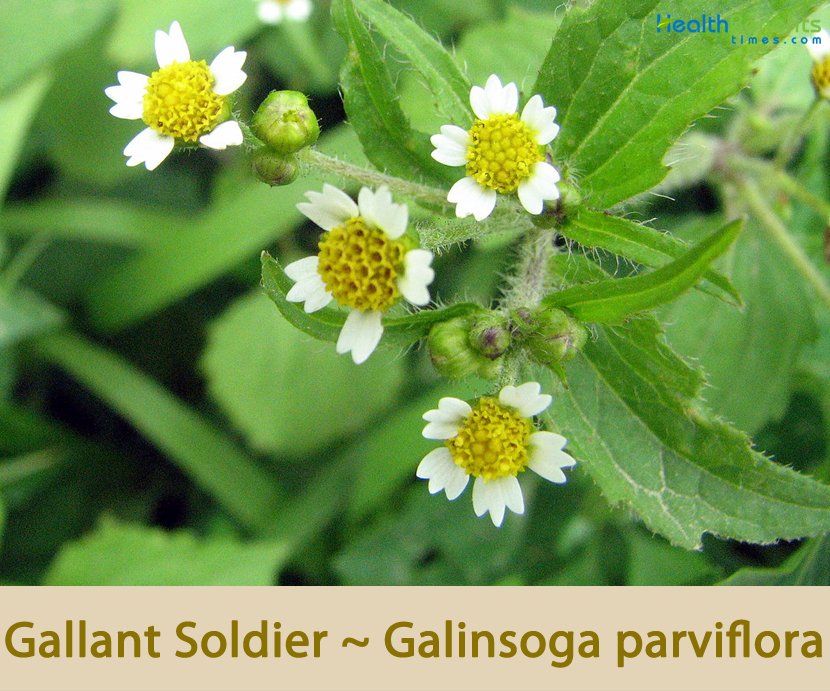 Gallant Soldier or Quick Weed scientifically known as Galinsoga parviflora is a slender annual herb belonging to Asteraceae Bercht. & J. Presl (Aster family). The plant is native to Central America, South America, Europe, West Indies, Mexico, Australia, Africa and Asia. However it is widely naturalized in other countries. It has been naturalized elsewhere, including North America and Australasia. In Pakistan, it can be found in Balochistan, Hunza, Dir, Swat, Gilgit, Murree and Kashmir. In tropical Africa it is widespread and has been collected in Cape Verde, central, eastern and southern Africa, and the Indian Ocean islands. It has several common names including dumb-nettle, galinsoga-weed, gallant soldier, lesser quick-weed, little flower quick weed, potato-weed, small-flower quick weed, smooth Peruvian-daisy, yellow-weed, chick weed, ciliate galinsoga, galinsoga, quick weed and small-flower galinsoga.

The genus name Galinsoga is derived from Ignacio Mariano Martinez Galinsoga, an 18th century Spanish botanist and physicist who identified the plant and transported it from the Andean regions of Peru to the Madrid Botanical Gardens. Parviflora is a Latin word which means small flower (parvo = small, and flor = flower), a reference to the small size of its flowers. The English name ‘Gallant Soldier’ could be a corruption of the ‘galinsoga.’ In Britain, its name Galinsoga is occasionally popularly rendered as “gallant soldiers”, and then sometimes altered to “soldiers of the Queen”. In Malawi, where the plant is naturalized, it is known as ‘Mwamuna aligone’ which translates to ‘My husband is sleeping’.

The stem is erect or ascending, leafy, and finely ridged and grooved. It has few to many branches and is hairless or sparsely to moderately covered with appressed and sometimes spreading hairs. The upper part of the stem does not have glandular hairs.

The leaves are simple, opposite, broad, long-stalked at the base, nearly sessile at the top. It is ¾ inches to 4¼ inches (2 to 11 cm) long, and ⅝ inches to 2¾ inches (15 to 70 mm) wide, sometimes wider. They are on slender, up to 1½ inches (4 cm) long leaf stalks (petioles). The leaf blades are lance-shaped to broadly egg-shaped and unlobed. They are mostly angled or short-tapered at the base and are angled or tapered to a sharp point at the tip. The upper and lower surfaces are sparsely to densely covered with short, slender, more or less spreading hairs. Three main veins are visible on the upper side. The margins are coarsely toothed with obscure, rounded teeth that amount to little more than bumps, and they have a fringe of short, slender, more or less spreading hairs. 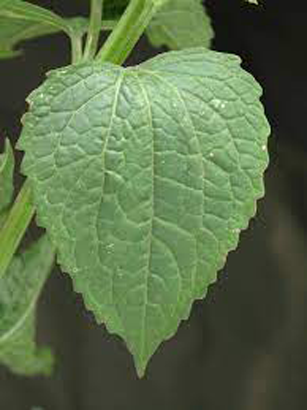 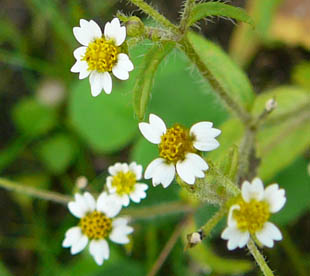 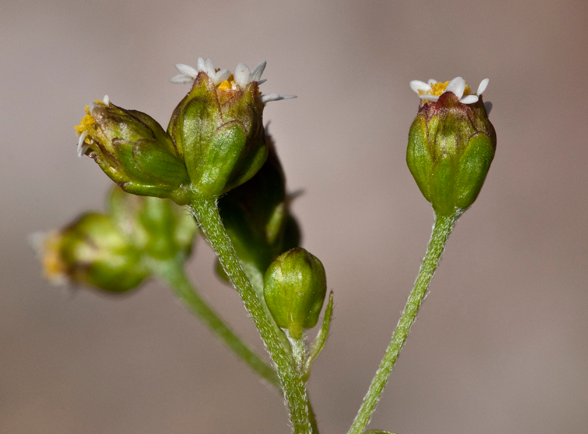 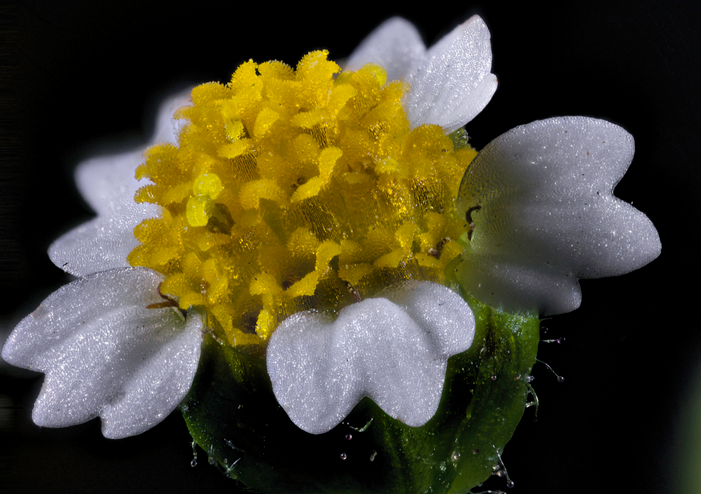 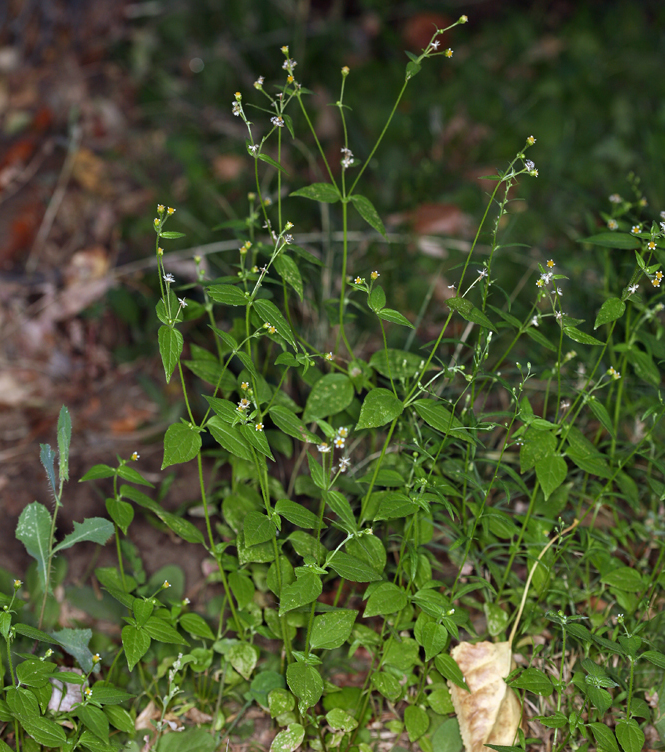 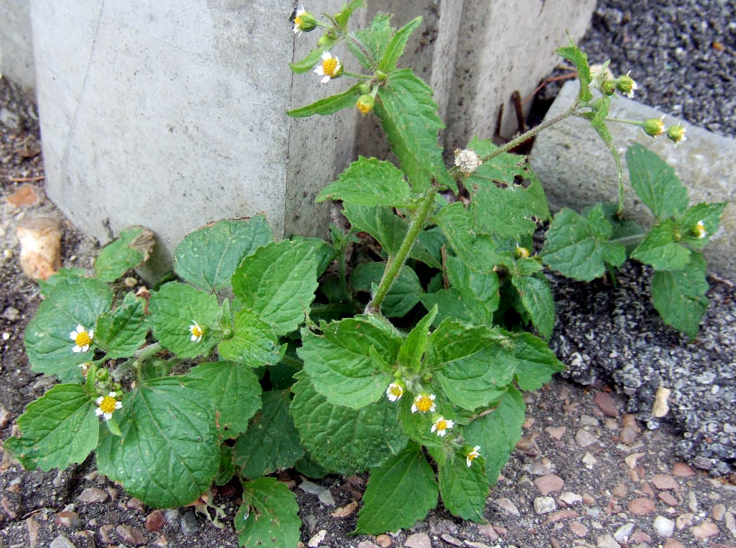 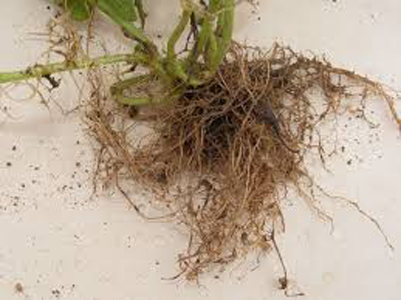 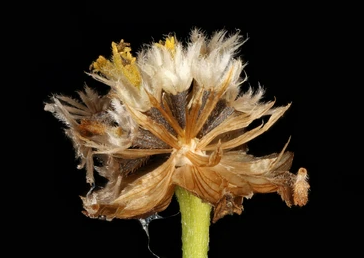 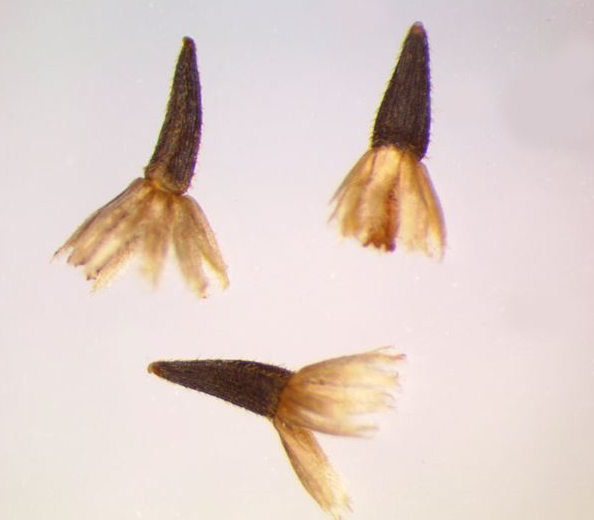 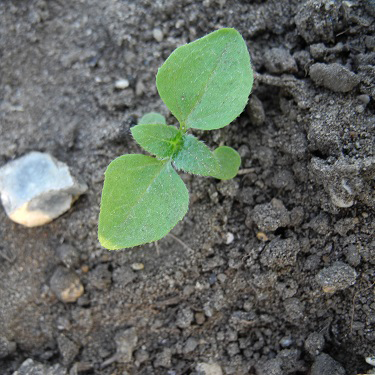 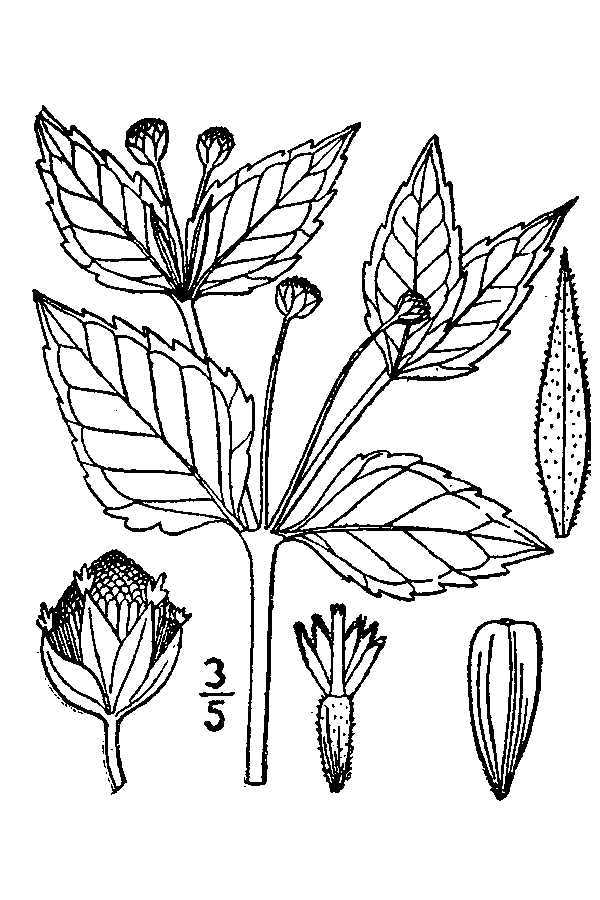 The inflorescence is an irregularly branched cluster (panicle) or loose cluster of flower heads, or sometimes just a single flower head, at the end of the stem and branches, and rising from the upper leaf axils of the main stem. Each flower head is on a 1⁄32 inches to 1½ inches (1 to 40 mm) long stalk (peduncle). The peduncle is covered with minute gland-tipped hairs.

Each flower head is small, just ¼ inches to ½ inches (6 to 12 mm) in diameter. At the base of each head there is a 3⁄32 inches to ⅛ inches (2.5 to 4.0 mm) long, 3⁄32 inches to 3⁄16 inches (2.5 to 5.0 mm) in diameter, hemispherical to bell-shaped, cup-like whorl (involucre) of 5 to 8 bracts (phyllaries) in two series. All of the phyllaries are green and are usually hairless. The inner series of 4 to 6 bracts are longer and broader than the outer 1 or 2 bracts. Each phyllary is fused to two thin dry (chaffy) bracts on the upper part of the peduncle (receptacle). The outer phyllaries have a thin white margin. They are dropped with their chaffy bracts as an intact unit with the fruits developing from the ray florets. The inner phyllaries are persistent.

The flower head has usually 5 widely spaced ray florets, sometimes just 4 or up to 8, and 15 to 35 disk florets. Both ray florets and disk florets are fertile. Each ray floret is usually dull white, with a tube-like portion at the base and a 1⁄16 inches to ⅛ inches (2 to 3 mm) long, widely spreading portion (lamina). The lamina has three teeth at the tip. There is no tuft of bristles (pappus) at the base, or just a minute one, much shorter than the corolla tube, that cannot be seen without a hand lens. Sometimes the rays are pink, and flower heads with both ray colors can appear on the same plant. The disk flowers are yellow. The corollas are 1⁄32 inches to 1 ⁄16 inches (0.8 to 1.5 mm) long and have 5 minute lobes. Flowering normally takes place in between May to October.

Fertile flowers are followed by black, 1⁄16 inches to ⅛ inches (1.5 to 2.0 mm) long, inversely cone-shaped or inversely pyramid-shaped (with the narrow end at the base) dry capsule (cypsela). At the base of each cypsela there is a yellowish pappus, usually shorter than the cypsela that spreads outward as the cypsela matures. The seeds germinate quickly, and there are usually two or three generations each year. This is the feature that gives the plant one of its other common names quick weed. One plant produces up to 300,000 seeds. Weight of 1000 seeds is 0.21 g. Vegetation period lasts 30-45 days. Spread by pappose seeds, which are carried by wind.

Galinsoga parviflora was brought from Peru to Kew Gardens in 1796, and later escaped to the wild in Great Britain and Ireland, being temporarily known as the ‘Kew Weed’. The plant is named after the Spanish botanist Ignacio Mariano Martinez de Galinsoga. The species name ‘parviflora’ translates to ‘having small flowers’.