Trending
You are at:Home»Herbs and Spices»Traditional uses and benefits of Moss Rose 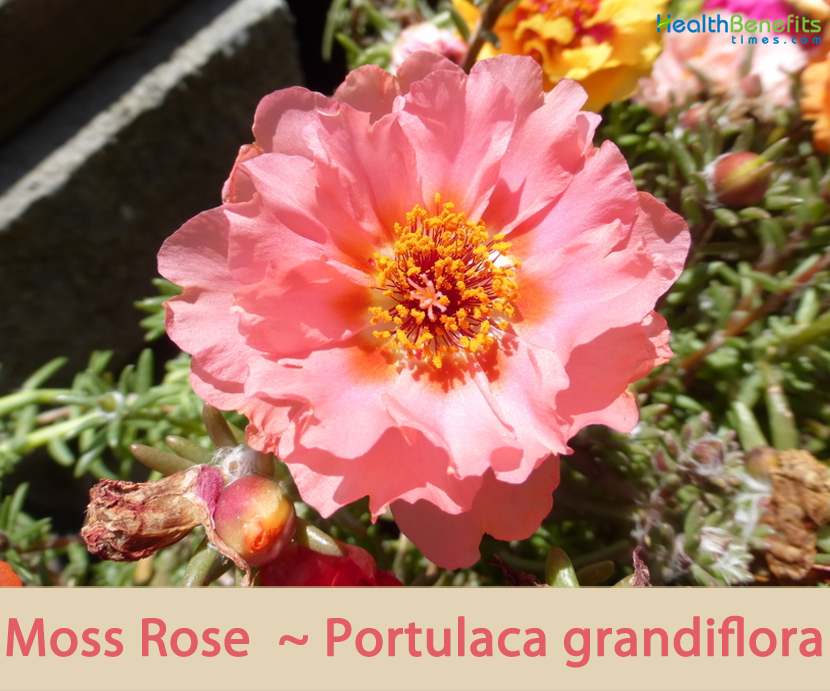 The genus name Portulaca was named by Linnaeus, who observed that the lid of the seed capsule opened like a gate. Portula is Latin word which means “little gate” for the top of the seed capsule that opens like a gate, while the specific epithet, grandiflora, means large-flowered. The flowers bloom every day with the morning sun and start closing after sunset. It is believed that planting a Nobchi flower plant in the house brings wealth and prosperity and increases money. The plant is occasionally harvested from the wild for its edible seeds and leaves, which are consumed locally. It is widely cultivated as an ornamental plant in tropical to warm temperate zones.

Moss Rose is a small, succulent, trailing, fast-growing, annual flowering plant that normally grows about 3 to 9 inches tall with a spread of 6 to 12 inches. However, if it is cultivated properly, it can easily reach this height. The plant is found growing in roadsides and waste places. It is adaptable to most soils, particularly in dry soils in sunny places, and is drought resistant. The plant grows on different types of soil, but prefers rich, moist, sandy-clay or sandy-loam soils such as riverine alluvial deposits. It does not grow well in heavy soil or smooth soil. Plants like full sun and dry place. It is a heliophilous species that grows in open areas. The plant has tap root with fibrous secondary roots 10 cm long. New roots can develop from the nodes of the base. Stems are slender, cylindrical, smooth, succulent, and glabrous. It is ascending to spreading, branched mostly from near the base to 20(-35) cm long, pubescent at least at the nodes and in inflorescence. Internodes are more or less long. Stems and branches are purplish green in color and is hairless.

Leaves are simple, opposite, lanceolate, alternate and sub sessile. The lamina is attenuated at the base in a pseudo-petiole. A tuft of short, stiff bristles is located at the axils of the leaves. The lamina is linear lanceolate, at the top in wide corner and elliptic to circular section. It is 2 to 3 cm long and 2 to 3 mm wide. It is thick and succulent and glabrous. Its long leaves can store water and nutrients well; the succulent plant can also survive stressful summer phases.

Large, rose-like flowers occur solitary or in small groups at the end of the branches but only bloom one after the other. They often grow in pastel shades, but also with strong tones. The flowers are sessile, yellow, white, orange, pink, salmon, or red and violet in color. The entire color spectrum can also appear in a single plant. The flowers have a diameter of around 15 to 25 mm and, as a rule, only open in the sunshine. The calyx is composed of 2 broad sepals whose base is welded to the ovary and whose upper part, 3 to 4 mm long, is free. The corolla comprises of 5 free petals, emarginate and mucronate at the top. The stamens are very numerous. The ovary is surmounted by a style dividing into 4 to 6 linear ciliated stigmas. The flowers are particularly abundant during warm, dry summers. There are also double-flowered versions. Some varieties have a sweet evening fragrance. Flowering normally takes place in between June to July.

Fertile flowers are followed by a globose-ovoid shaped dehiscent capsule. It is surmounted by two sepals. The dehiscence line is located at the equator of the capsule. It is 6 to 8 mm long and contains many seeds. The seeds are reniform-globose, laterally compressed, with a diameter of 0.75-1 mm. They are steely grey to black, sometimes iridescent or some-what glossy. The tegument is marked with spiny tubers.

Portulaca plant is known by the name ‘Nobachi’. Portulaca grandiflora is a succulent flowering plant in the family Portulacaceae, native to Argentina, southern Brazil, and Uruguay, and often cultivated in gardens. It is known by many names, including Nobachi plant, rose moss, eleven o’clock, moss rose, tenbage, Mexican rose, moss rose, sun rose, rock rose, and moss-rose marmalade. It is also seen in South Asia and is widespread in most cities with old 18th- and 19th-century architecture in the Balkans. 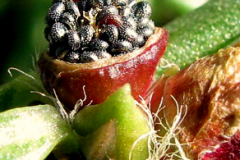 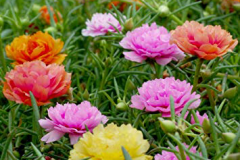 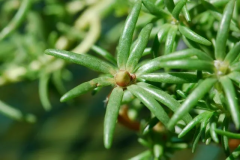 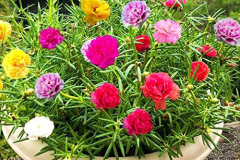 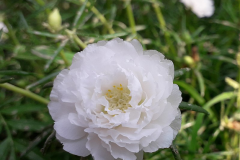 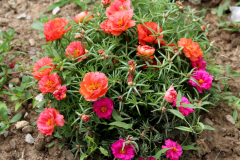 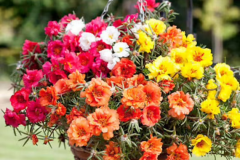 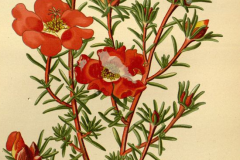 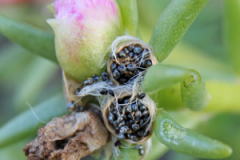 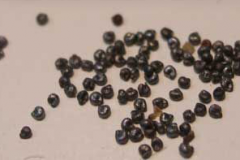 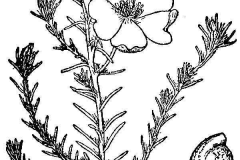 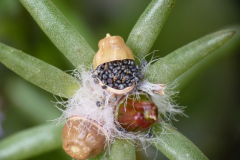 To appear and blossom their best, Moss Rose plants require at least six to eight hours of direct sunlight on the majority of days. If you attempt to cultivate them in a shaded location, they will not produce flowers, and the ones they do produce will likely not open.

The plant requires great drainage and a sandy or rocky soil composition to grow. If your garden bed contains clay soil, grow Moss Rose in containers instead of attempting to enhance the drainage of the clay soil. The plant might easily perish if the soil absorbs too much water.

Moss Rose plants have low water requirements but are not quite as drought-resistant as cacti. The plants can tolerate periods of drought, but (well-drained) soil moisture is typically required for optimal flowering. Plan to water the plant if there is an extended period without precipitation; as a general rule, one deep watering per week throughout the hot summer months should be sufficient.

Moss Rose plants prefer high temperatures and low humidity. As long as it is frost-free, it can survive cool, damp spring conditions. The best development (and flowering) will only occur once the summer heat arrives. Moss Rose is sensitive to frost and will certainly perish with the first severe freeze in the winter (if not earlier).

These plants can endure poor soil conditions; thus, they normally do not require fertilization. However, supplying the plant with a balanced, slow-release fertilizer at the time of planting can encourage healthy development and abundant flowering. Additionally, you can fertilize twice during the plant’s growing season, this time using a phosphorus-rich mixture for more abundant flowers.

There are no significant insect or disease issues with table plants, though aphids may occasionally cause problems in the spring. With aphids, you may observe a sticky material on the leaves as well as yellowing and wilting foliage. To cure the problem, apply insecticidal soap to the afflicted plants.