Trending
You are at:Home»Fruits»Ginkgo biloba facts and health benefits 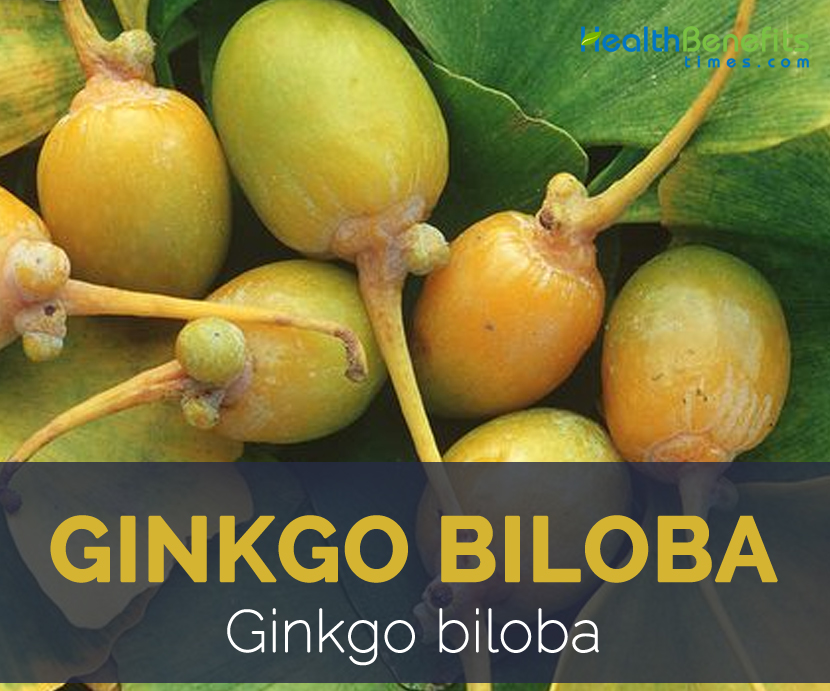 Ginkgo biloba, also known as the maidenhair tree, is one of the oldest species of trees on the planet. It is a unique tree without any living botanical relatives. It has been classified in a separate division Ginkgophyta, which contains the class of Ginkgoopsida, order of Ginkgoales, family of Ginkgoaceae, genus Ginkgo, and to this day it is the only living species belonging to this division. The tree is considered to be a “living fossil”, meaning that it has continued to survive even after major extinction events. It was named the maidenhair tree in England because the leaves look similar to the native maidenhair fern. The genus name Ginkgo is regarded as a misspelling of the Japanese gin kyo, “silver apricot”. The plant is native to Far East Asia – China, Japan and Korea and Common Ginkgo, Duck’s Foot Tree, Gingko, Gingko Biloba, Gingko Nuts, Golden Fossil Tree, Kew Tree, Maidenhair Tree are few of the most common names of this plant. The plant has unique features and is capable of growing more than 130 feet and can live for over one thousand years. In fact, there are some trees in China are said to be over 2,500 years old. Some of the popular varieties of ginkgo Biloba are Autumn Gold, Fastigiata, Pendula, Princeton Sentry, Saratoga and Variegata.

Female ginkgo tree bears oval to round, 2.5–3.5 × 1.6–2.2 cm fleshy fruits about the size of small jujube (Chinese date). Fruit is normally green when young turning to pale yellow when mature. Its outer, nasty smelling pulp (exocarp) is known botanically as sarcotesta. A single hard shelled seed enclosing edible embryo (kernel) is situated at the center of fruit. An edible ginkgo nut is in fact a gametophyte surrounded by a thin membranous layer inside this hard shell as in pistachio. Ginkgo kernels measure about 1.5-2 cm in length and 1 cm in diameter and feature light jade green hue.

Ginkgo is considered to have originated from Far East Asia – China, Japan and Korea. It is commonly planted in Buddhist and Taoist temples in East Asia. It has been introduced to other temperate areas in both hemispheres. It is a remarkable tree that is similar to fossils dating back 270 million years ago. No other tree species in existence today is associated to the unique Ginkgo tree, which can live as long as one thousand years. Native to China, the tree has been used to help asthma and bronchitis since 2600 BC. In fact, the Ginkgo tree is the official national tree of China today.

Ginkgo biloba has a long history of use in treating blood disorders and memory issues. It is best known today as way to potentially keep your memory sharp. Laboratory studies have shown that ginkgo improves blood circulation by opening up blood vessels and making blood less sticky. It is also an antioxidant. Listed below are some of the popular health benefits of using Ginkgo Biloba –

Many of the brain-boosting ginkgo biloba benefits that researchers have discovered rest on the fact that it’s an effective anti-inflammatory that increases antioxidant activity, lowers oxidative stress and improves circulation — all important factors for maintaining cognitive health.

One of the most commonly praised side effects of ginkgo biloba extract (GBE) is its impact on cognition. Research has demonstrated ginkgo biloba’s ability to increase memory and retention, boost focus, and stimulate creative thinking. Since the medicinal benefits of ginkgo are so commonly known, but millions of people around the world turn to GBE for a brain boost.(2)

Several researches have discovered that supplementing with CoQ10 and ginkgo together improved quality of life for people identified with fibromyalgia, a disorder of the nervous system. Fibromyalgia is actually an extensive muscle pain normally accompanied by fatigue; headaches; and trouble with sleep, anxiety and depression. Ginkgo biloba is actually one of the best natural fibromyalgia treatments.

Ginkgo biloba has mild analgesic qualities likely resulting from anti-inflammatory properties in the organic compounds. In other words, when inflammation decreases, so too does the pain it causes. This makes it a popular option for people recovering from injuries or wounds, as well as those who suffer from chronic headaches.(3)

Ginkgo appears to be beneficial for eye health since it improves blood flow to the eyes and fights free radial damage that may harm the cornea, macula and retina. It might be beneficial for older adults in conserving vision and lowering UV damage or oxidative stress to eye tissue.

Apart from that ginkgo are effective at lowering the risk for age-related macular degeneration. Vascular factors and oxidative damage are supposed to be two primary causes of vision loss and other age‐related eye disorders, but antioxidant plants and herbs like ginkgo help alleviate these effects.

Ginkgo biloba have a positive impact on people who are suffering from cognitive disorders, such as Alzheimer’s and dementia. There have been measurable improvements in cognitive ability and activity, primarily due to the antioxidant compounds in GBE, including terpenoids and flavonoids that stimulate neural activity and keep cognitive pathways fresh and clear of amyloid plaque. This is by far the most popular use of ginkgo biloba, as there is the most research to back up these very important claims.(4)

Research have found that ginkgo biloba is beneficial for people suffering from painful hemorrhoids, which cause swelling, pain and bleeding because of an increase in pressure on the veins of the anus and rectum. Ginkgo help to lower pain improve pain tolerance and decrease inflammation, which helps to stop bleeding related with hemorrhoids, making ginkgo biloba an effective hemorrhoids treatment.

Research has shown ginkgo biloba extract beneficial for increasing blood vessel dilation and stimulate blood flow to extremities in the body, including the skin and other essential organs, properly oxygenating the whole body and boosting energy and strength. This increase in blood flow also helps people suffering from claudication or poor circulation, allowing them to walk longer distances without pain. Apart from that it is often taken by people who suffer from gout as well, benefitting from this anti-clotting effect and the anti-inflammatory properties.(5)

Ginkgo biloba is extremely beneficial for its powerful effect on vision. Antioxidants in ginkgo biloba help to keep the ocular system clear of oxidative stress, thus preventing macular degeneration and cataracts, but for people who suffer from glaucoma and other vision issues, GBE has shown to improve vision and increase long-distance sight capacity.(6)

Raynaud’s disease is mainly caused by blood vessels that over react to the cold and spasm, decreasing blood flow and thereby divesting extremities of oxygen. Ginkgo biloba may help this condition by broadening the small blood vessels, which keep these spasms from totally blocking the blood flow.

Ginkgo biloba extract is extremely beneficial for lowering blood pressure and eliminating of blood clots throughout the cardiovascular system. These two effects, when combined, can be a major boost to heart health, as dilating blood vessels reduced the strain on the heart, while the anti-clotting capability considerably decreases the chances of suffering from a heart attack or stroke.(7)

Regular consumption of Ginkgo might be an effective way to naturally cure frequent headaches and decrease the rate and severity of migraines since it decreases pain, increases blood vessel dilation and combats stress that all trigger an attack. Headaches are caused by alcohol or drugs, allergies, stress, fatigue, hormones, eyestrain, constipation, poor posture, low blood sugar and nutritional deficiencies. The amazing benefits that ginkgo has on stress and fatigue goes hand in hand with its capability to decrease headache tension.

Ginkgo biloba extract (GBE) seems to exert an optimistic effect on the nervous system, speeding up reaction time and lowering chances of nervous disorders. This combination of chemicals and compounds is not found in any other plants, which is why many of the purported health benefits of ginkgo biloba are somewhat mysterious and hard to “prove”, as there are no other types of plants on which to test comparative hypotheses. Reductions in symptoms of Parkinson’s disease and Raynaud’s disease have both been shown to be linked to ginkgo biloba consumption.(8)

Ginkgo biloba consists of high level of antioxidant  including the rich variety of terpenoids, flavonoids, and polyphenolic compounds, all combine to remove free radicals throughout the body, the dangerous byproducts of cellular metabolism that attack healthy cells and either cause apoptosis or mutation into cancerous cells. With such a diverse range of antioxidants, ginkgo biloba help to keep the entire body protected from chronic disease, most remarkably cancer and heart disease, because free radicals weaken the blood vessels walls of the cardiovascular system.(9)

Ginkgo biloba is one of the wonderful anti-aging secret. While many of the claims are a bit hyperbolic, the antioxidants in GBE help the skin remain tight and healthy, reducing the appearance of wrinkles and other age spots, as well as helping to speed up wound healing and reduce the appearance of scars.(10)

Research that include ginkgo have found relief and improved concentration for people with ADHD symptoms. As it can improve concentration, memory and task performance, it can possibly also reduce symptoms in people with dyslexia.

It is said that ginkgo has positive effects on hormonal balance — particularly serotonin levels, blood pressure and circulation — therefore it might help people struggling with erectile dysfunction and low libido. Ginkgo has the potential to dilate blood vessels and increase blood flow to the genitals, which is essential for reproductive health.

Insufficient dopamine is supposed to produce the progressive stiffness, shaking and loss of muscle coordination typical in Parkinson’s disease. Doctor’s theories that along with other treatments, Ginkgo biloba may help symptoms by increasing the brain’s blood flow and thereby allowing more of the depleted dopamine to be circulated to the areas that need it most.

Other Traditional uses and benefits of Ginkgo biloba

The use of herbs is a time-honored approach to strengthening the body and treating disease. However, herbs can trigger side effects and interact with other herbs, supplements, or medications. For these causes, herbs should be taken carefully, under the supervision of a health care provider qualified in the field of botanical medicine.

Ginkgo usually has few side effects. In a few cases, people have described stomach upset, headaches, skin reactions, and dizziness.

Stop taking ginkgo 1 to 2 weeks before surgery or dental procedures due to the risk of bleeding. Always alert your doctor or dentist that you take ginkgo.

People who have epilepsy should not take ginkgo, because it may cause seizures.

Pregnant and breastfeeding women should not take ginkgo.

People who have diabetes should ask their doctor before taking ginkgo.