Trending
You are at:Home»Herbs and Spices»Traditional uses and benefits of Golden Trumpet 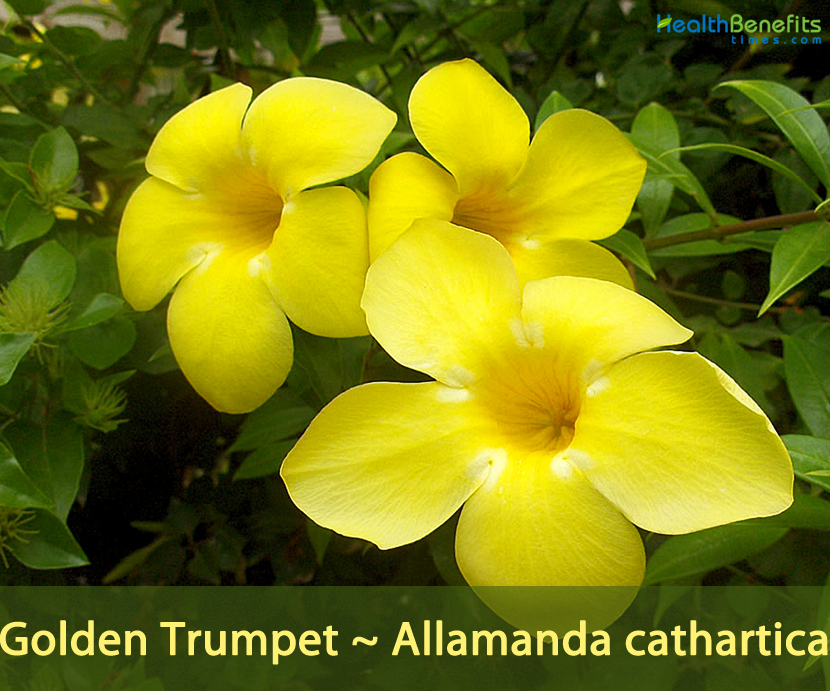 The genus name Allamanda is given after Swiss botanist Dr. Frederick Allamand. The specific epithet cathartica means cathartic, cleansing, purging which refers to its medicinal purpose in inducing vomiting. The plant is occasionally used medicinally, even though it is poisonous. It is commonly grown as an ornamental, sometimes also as a hedge or a ground cover. The city of Canóvanas, Puerto Rico has adopted this species, known locally as canario Amarillo, as its official flower. It is particularly popular in the Cairns area, in northern Queensland, and some local businesses in this region have even incorporated it into their corporate identity.

Golden Trumpet is an evergreen, vigorous, perennial, clambering or sometimes twining, woody compact shrub or creeping shrub that normally grows about 2 to 4 meters tall and spread up to 5 m or more, but can grow much higher when climbing up over other vegetation (i.e. up to 6 m in height).It does not twine, nor does it have tendrils or aerial roots. It can be pruned into a shrub form. The plant is found growing in wet forests, secondary forests, swampy areas near rivers and lagoons, disturbed areas, roadsides, forest edges, abandoned gardens, farms, riverbanks, along creeks and waste areas. As a tropical shrub, golden trumpet is best grown in soils rich in organic matter. Soils should also be moist but well-drained. These plants are tolerant of most soil types, but prefer either clay soils or sandy-clay. In alkaline soils, golden trumpet can become chlorotic – if possible, aim for a pH of between 5.0 and 6.0 for the healthiest plants.

The older stems are mostly woody and brownish in color, while the younger branches are generally green and hairless (i.e. glabrous). Bark of lower stems is brown and furrowed. Twigs are green or yellow green. The stems and leaves both contain a milky sap (i.e. latex).

The simple leaves are arranged in groups of three or four along the branches (i.e. the leaves are whorled or verticillate). They are borne on very short stalks (i.e. petioles) only 2-5 mm long and have blades that are egg-shaped in outline (i.e. obovate) to somewhat elongated in shape (i.e. oblong-lanceolate). These leaves are 5-17 cm long and 2.5-6 cm wide and have a narrowed (i.e. attenuate) base, entire margins, and a pointed tip (i.e. acuminate apex). They are somewhat shiny in appearance, relatively thick and leathery in nature, and hairless (i.e. glabrous).

The large flowers are 7-11 cm long and 5-7.5 cm wide and have five bright yellow petals that are fused together at the base to form a tube (i.e. corolla tube) about 4-8 cm long. This tube has reddish markings on the inside and is topped with five spreading petal lobes. The flowers also have five sepals (8-22 mm long) that are fused into a much smaller, greenish-colored, tube at their bases (i.e. a calyx tube). Each flower also has five stamens that are joined directly onto the inside of the petals (i.e. adnate to the corolla tube) and a long style with two small branches at its tip. The flowers are borne in loose clusters (i.e. cymes) near the tips of the stems, each containing about ten flowers. Individual flowers are borne on short stalks (i.e. pedicels) about 5-7 mm long and the petals (i.e. corolla lobes) are folded and twisted when in bud. Flowering probably occurs mostly during spring and summer.

Fertile flowers are followed by rounded (i.e. globose) capsules about 30-75 mm across that are densely covered with soft spines (about 1 cm long). These fruit are rarely seen in cultivated plants. The seeds are somewhat flattened (i.e. compressed), tan in color and are slightly winged or have a thin (i.e. membranous) margin. 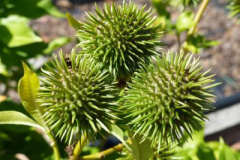 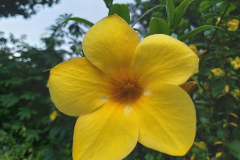 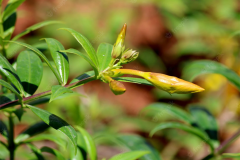 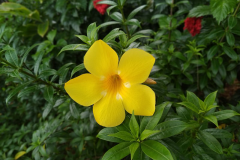 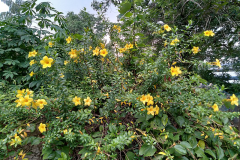 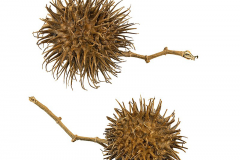 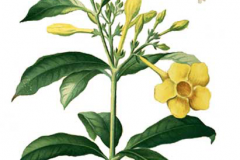 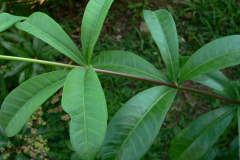 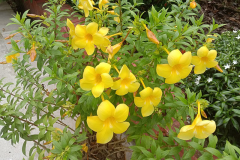 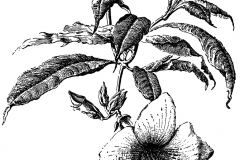 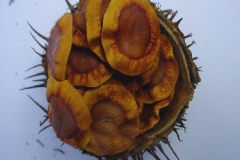 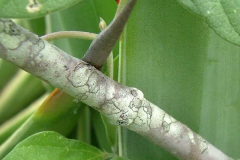 Golden Trumpet has a very strong and extensive root system and therefore a combination of manual and chemical methods are recommended for its management. In the case of smaller infestations, plants should be removed manually and uprooted. All plant segments should be removed from infested areas to avoid re-sprouting. Larger infestations can be controlled by first digging out all plants. Later, all plant segments and re-sprouts should be sprayed with the herbicide triclopyr. Follow-up treatment and repeated applications of herbicide might be necessary to kill remaining plants and all re-sprouts.

Yellow allamanda has a very strong and extensive root system and requires persistent effort to remove by hand. Dig out large areas using a garden fork and mattock. If stems are cut, the stump must be treated with a suitable herbicide to prevent reshooting. Hand weeded yellow allamanda must be hung up off the ground or preferably taken out of bush land areas as stem fragments can take root.