Trending
You are at:Home»Herbs and Spices»Health benefits of Grains of Selim 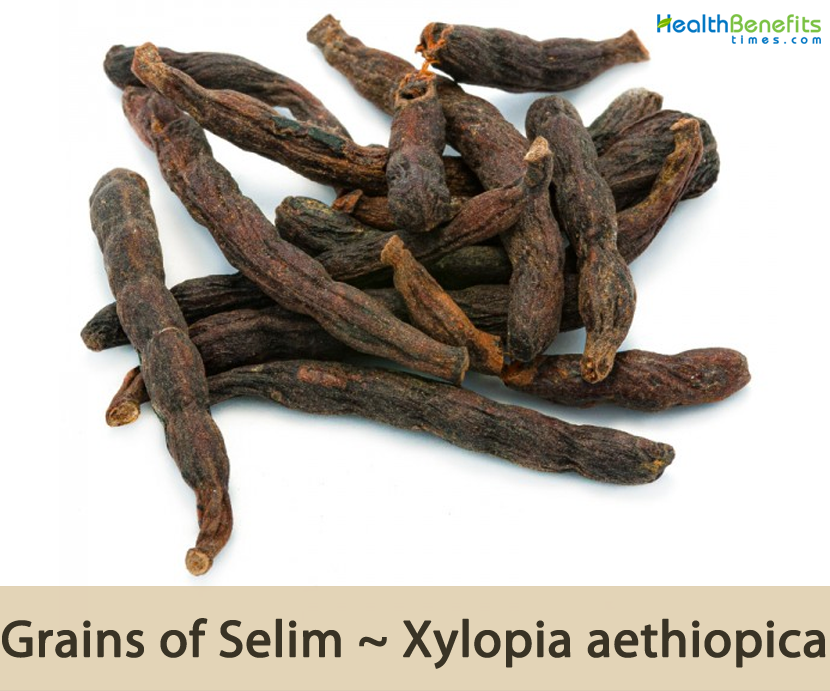 Xylopia aethiopica popularly known as Grains of Selim is an evergreen, aromatic tree belonging to Annonaceae (Custard-apple family). The plant is native to lowland rainforest and moist fringe forest in the savanna zones of Africa, but largely found in West, Central and Southern Africa, particularly in Ghana, Nigeria, Cameroon, Ethiopia, and Senegal to name a few. Apart from Grains of Selim it is also known as African grains of Selim, Ethiopian pepper, Grains of Selim, Kani pepper, Moor pepper, Negro pepper, Senegal pepper, spice tree, many red-fingers, African pepper, Senegal Pepper, Xylopia and Uda Seeds. The genus name Xylopia is a compression from Greek word ξυλον πικρον (xylon pikron) which means bitter wood. The second part of the plant’s binomial name, aethiopica, refers to the origin of the tree, in Ethiopia, though presently it grows most prominently as a crop in Ghana, Togo and other parts of West Africa.

Ethiopian pepper is a multipurpose tree that is very important in the local economy, supplying foods, a wide range of medicines, wood and many other commodities. The fruit was at one time exported to Europe. It remains an important item of trade throughout parts of Africa, sold in local markets as a spice and medicine. The tree is often cultivated near villages and is often protected when growing in the forest. It is also sometimes planted as an ornamental and to provide shade. Negro pepper has been used as a pepper substitute in Europe, but with regular imports of black pepper from India starting in the 16th century, it mostly disappeared. In later times, Negro pepper was only traded as a pepper substitute (or surrogate) in times of war and short supply; the last time, it was seen from after World War II till the 60ies of the previous century. It is now rarely available outside of the production countries.

A grain of Selim is a tall, slim, evergreen aromatic shrub or tree that normally grows about 50 to 100 feet (15 to 30 meters) tall, with a trunk 24 to 28 inches (60 to 70 cm) wide. The plant is found growing in lowland rainforest, coastal brackish swamps, littoral formations, deciduous and fringing forests, and swamp forest, riverine and fringing forest. The plant has straight stem, many-branched crown and sometimes buttressed. Young branchlets are puberulous at first, but soon glabrous, reddish-brown to blackish, smooth or rugose and mostly with many conspicuous lenticels. Bark is grey-brown, smooth or finely vertically fissured and peeling easily.

Leaf-blades are oblong, elliptic, ovate or oblanceolate, 8–16.4 cm long, 2.8–6.5 cm. wide, obtuse, acute or prominently acuminate at the apex (the acumen attaining 2 cm.), cuneate to rounded and decurrent at the base, coriaceous, drying bluish-green above and greenish-brown to orange beneath, glabrous above, adpressed pubescent or glabrescent (silky pilose when very young) and usually ± glaucous beneath; venation laxly to densely reticulate, usually prominent on both surfaces but sometimes obscure above; petiole 3–6 mm. long, blackish, adpressed pubescent or glabrescent.

Flowers are solitary or in 3–5-flowered fascicles, fragrant; pedicels 0.4–1.1 cm. long, adpressed ferruginous pubescent; bracteoles 2–3, cucullate, 1–4 mm. long, 2–2.5 mm. wide, adpressed pubescent outside, glabrous inside. Sepals are ovate-triangular, 3–5 mm. long and wide, rounded to acute or apiculate, glabrescent to pubescent outside, glabrous inside. Petals are cream, greenish-white or yellow; outer linear, 2.5–5.5 cm. long, 2–3.5 mm. wide above, 5–6 mm. wide at the base, concave at the base, silky pubescent outside, tomentellous inside save at the base; inner rather shorter and narrower, 2.7–4.5 cm. long, 1.5–2 mm. wide, tomentellous save at the base. Stamens are linear, 1–1.5 mm. long; connective-prolongation obliquely capitate, papillose or pubescent. Carpels are 24–32(–42); ovary cylindric, 1–1.5 mm. long, sparsely adpressed pilose, 6–8-ovuled; styles linear-tapering, aggregated to form a very narrow cone ± 3–4.5 mm. long.

Fertile flowers are followed by small, twisted bean-pods. They are dark brown, cylindrical, 2.5 to 5 cm long and 4 to 6 mm thick; the contours of the seeds are visible from outside. Each pod consists of 5 to 8 kidney-shaped seeds grains of approximately 5 mm length. The hull is aromatic, but not the grain itself. The dried fruits of X. aethiopica (grains of Selim) are used as a spice and an herbal medicine. 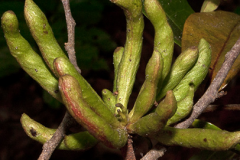 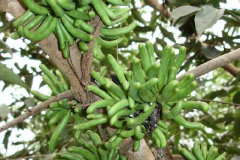 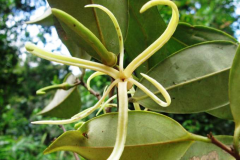 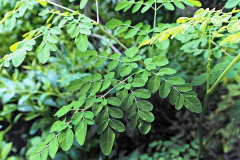 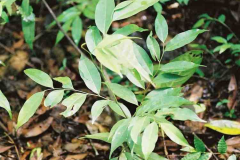 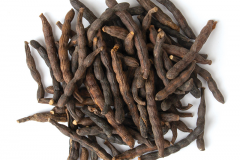 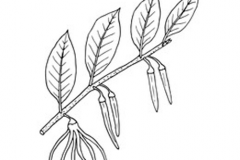 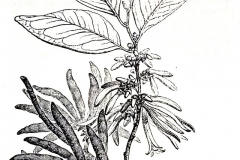 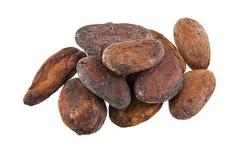 Health benefits of Grains of Selim

Grains of Selim seeds are proven to be a great remedy for treating skin conditions, including boils, itches and skin eruptions.

Researches have revealed that the bark of Grains of Selim consists of some powerful properties, which are very effective in treating respiratory system diseases like common cold, bacterial pneumonia, asthma and bronchitis.

To shield yourself against such diseases, it is best you avoid exposing yourself to harmful environmental substances, such as tobacco smoke, dust, chemicals, vapors, fumes, etc. When you inhale too much of this, it may trigger inflammation in your lungs, which may, in turn, lead to an infection.

Also known as rheumatic disorders, Rheumatism is an umbrella term for diseases that cause chronic pain and inflammation in the joints, muscles, or connective tissue. If in case you are battling with this disorder, bark of Grains of Selim tree has anti-arthritic, antipyretic and anti-inflammatory properties that can be used in treating a myriad of rheumatic disorders, including arthritic pain.

Gastrointestinal disorders are health conditions affecting the gastrointestinal tract [oesophagus, stomach, rectum, small and large intestine]. This includes stomach ache, irritable bowel syndrome, dysentery, gastric ulcers, indigestion, flatulence, etc. The leaves of Grains of Selim are found to be aseptic in nature, meaning that they are capable of relieving the aforementioned internal disorders.

There are quite a few issues associated with menstruation. Some reports have claimed that Grains of Selim may be useful in treating menstrual issues. Seed of Grains of Selim when dried are normally used in traditional medicine for enhancing menstrual blood flow, and for treating amenorrhea.

Grains of Selim have been known to be effective in treatment of bronchitis. It is used as a natural treatment in Africa for treating acute cases of this disease by consuming it in the form of decoction.

7. Helps in treatment of dysentery

The anti-bacterial effect of this herb has been known to be effective in killing bacteria present in the stomach and the intestines. This property thus helps it in acting as a cure to digestive issues such as dysentery and diarrhea.

8. Helpful in case of toothaches

The anti-bacterial property of this herb makes it useful for use as an herbal remedy against toothache. It is known to be used as an active ingredient in mouthwash which helps in maintaining oral health.

Asthma is one of the most common respiratory issues. This herb tends to helps in curing the triggers which encourage these issues and thus reduce the chances of asthma.

It has anti-malaria properties and so can be used in herbal drugs to prevent and treat and prevent malaria.

Grains of Selim has anti-spirochetal properties therefore are potentially useful in treating syphilis, yaws and other related diseases.

It can be used as a contraceptive or birth control tool to help reduce the chances of getting pregnant. Therefore controls the spacing of your children.

Traditional uses and benefits of Grains of Selim

Side effects of Grains of Selim

2. Toxic to the Liver and Kidney

Liver and the kidneys are some of the most essential and hardworking organs in the body. They carry out numerous functions such as excretion of waste, metabolism of many substances, hormonal regulation, and proper digestion, as well as proper coagulation. Research has shown that despite its many beneficial effects, Grains of Selim can be toxic. Findings from a study revealed that aqueous extract of Grains of Selim possess some toxic effect on the liver and kidney. Indiscriminate ingestion of the extract of Grains of Selim should be avoided.

Menstrual cycle is the hormonal process a woman’s body goes through each month to prepare for a possible pregnancy. Regular menstrual periods in the years between puberty and menopause are usually a sign that your body is working normally. Irregular or heavy, painful periods are not normal. Grains of Selim can alter the normal pattern of a woman’s monthly flow. According to research alterations in the estrous cycle, specifically, with prolonged diestrus, reductions in ovulation levels and implantation, as well as, abortifacient effect. Dietary Grains of Selim could be a good candidate for consideration as an oral contraceptive agent.