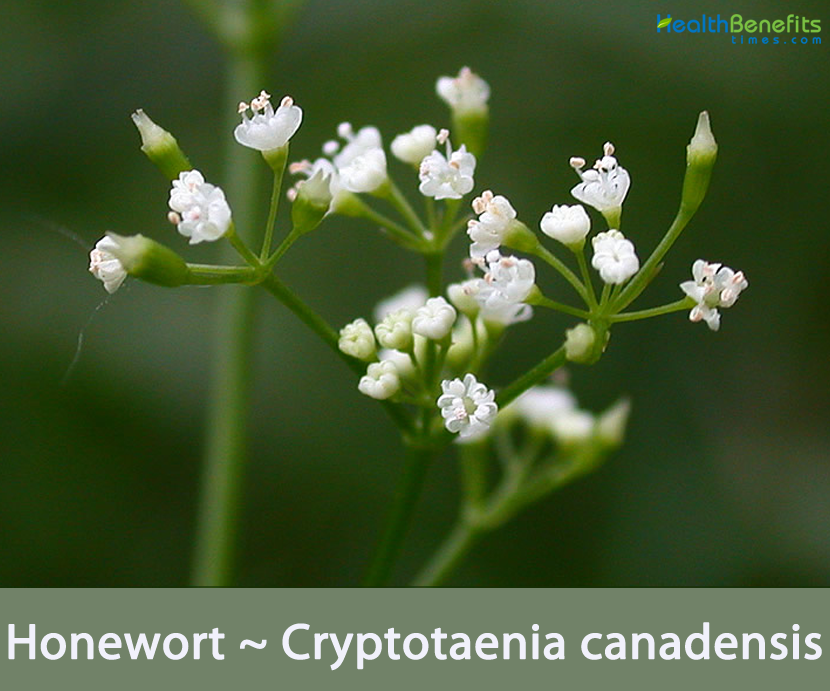 Cryptotaenia canadensis commonly known as the honewort or Canadian honewort is a perennial plant species belonging to Apiaceae / Umbelliferae (Carrot family). The plant is native inhabitant of rich, moist forests in the eastern United States and eastern Canada, although it is rare in Maine, where it is known only from historical collections. Few of the popular common names of the plants are honewort, wild chervil, umbel weed, Canadian honewort, White chervil, Canada honewort and Japanese parsley. It is harvested from the wild for local use as a food. Young stems and leaves may be added fresh to salads (like parsley) as a flavoring or may be boiled as a green. It gives a parsley-like flavor to soup. Roots can be cooked and eaten like parsnips. Seeds can be used as a spice. This species is a host plant for the black swallowtail butterfly.

The genus name Cryptotaenia is derived from the Greek krypto, meaning “to hide” and taenia meaning a band, ribbon or fillet – together thought to refer to the oil tubes hidden or concealed in the fruits. The species name canadensis means of or from Canada. The common name of honewort refers to a plant that has medicinal qualities (the wort part) but hone is of unknown origin making it unclear what was supposed to be treated by using the plant. Wort means plant and hone is a swelling in the cheek which honewort plants purportedly will cure.

Honewort has a taproot system. Instead of growing clusters of long, fibrous roots, a honewort plant has one dominant root from which smaller, secondary roots (rootlets) grow.The roots, like the visible parts of the plant, are edible. They have a taste comparable to parsnips. The roots never get overly bitter with age, but they do become tougher. Generally, younger plants are more popular than mature ones. Because there is one central root, the plant does not spread by rhizomes.

Honewort stems are green and smooth. They don’t have any hairs growing along them. The stems are light green and have one leaf per node. If you look closely at the lower half of the stem, you’ll see elongated membranous sheaths forming around the petioles. These sheaths make the area of the stem they cover cloudy or milky, while the rest of the stem is a vibrant green. Like leaves, the stems are edible and a popular parsley substitute.

The leaves are alternate and are divided into 3 leaflets. The terminal leaflet is symmetrical. The two lateral leaflets are asymmetrical, with the lower half (away from the terminal leaflet) usually distinctly wider than the upper half. This causes the leaflets to appear somewhat swept forward. Lower leaves are on leaf stalks (petioles) that are up to 4 inches long. The petiole forms a sheath at the base that wraps around the stem. The sheath is not inflated. When flattened out it is less than ⅜ inches wide.

The leaflets are lance-shaped, elliptic, or egg-shaped, 1¼ to 6 inches long, and up to 2 inches wide. They are sometimes cut into two unevenly-sized lobes. They taper at the base to a winged leaflet stalk (petiolule) and taper at the tip to a sharp point. The upper and lower surfaces are hairless. The margins are toothed with coarse or fine, sharp, forward-pointing teeth. They are sometimes doubly toothed, the major teeth larger and forward-pointing. The lateral veins of the leaflet branch before reaching the margin, and the branches extend to the tips of the major teeth. The leaves become progressively smaller and shorter stalked as they ascend the stem. Upper leaves are stalk less. 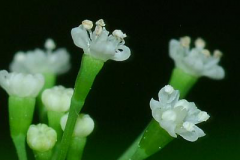 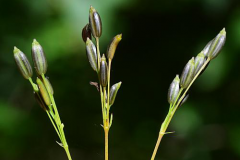 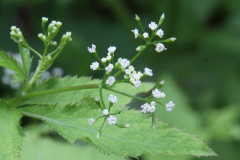 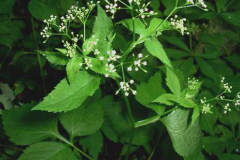 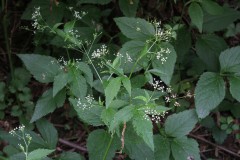 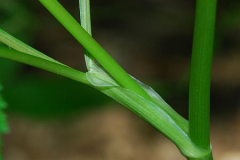 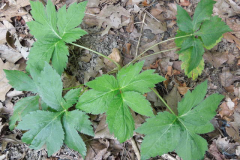 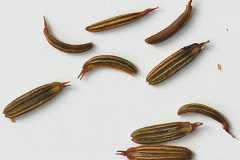 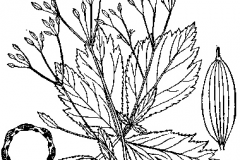 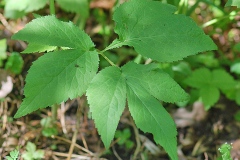 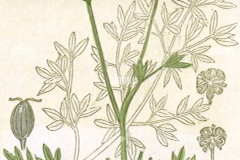 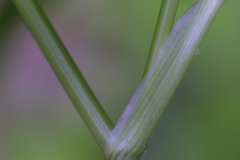 The inflorescence is a compound umbel at the end of the stem and each branch appearing in June to July. The umbels are round and 2 to 3 inches in diameter, and have 2 to 7 stalks (rays). The rays are ascending, hairless, and 3 ⁄16 to 2 inches long. They are unequal in length. They are sometimes subtended by a single leaf-like appendage (bract). When present, the bract is linear, sharply pointed, and shorter than the ray. Each ray terminates in a secondary umbel (umbellet).

Each umbellet has 2 to 10 stalked flowers. The stalks (raylets) are 1⁄16 to 13 ⁄16 inches long and are unequal in length. They are sometimes subtended by 1 to 3 bractlets. The bractlets, when present, are lance-shaped, up to ⅛ inches long, and shorter than the raylets. Each raylet terminates in a single tiny flower.

The flowers have 0 to 5 sepals, 5 petals, 5 stamens, and 2 styles. The ovary is hairless. If present, the sepals are reduced in size to minute teeth. The petals are white, inversely egg-shaped, and rounded or abruptly pointed at the tip. There are 5 stamens, widely spaced, with yellowish anthers; 2 styles; both styles and anthers exserted from the corolla throat. The ovary is of 2 carpels. Sepals are absent or reduced to small scales, leaving the green calyx short and tubular.

Fertile flowers are followed by a 2-chambered seedcase (schizocarp). It is green at first, turning dark brown with greenish-yellow ribs at maturity. It is smooth, hairless, narrowly oblong-elliptic, and 4 to 7 mm long. It is more than twice as long as wide. It is slightly flattened laterally and tapers to a short, prolonged extension (beak) at the tip. When ripe, the fruit splits into 2 separate seedcases (mericarps), each with a single seed. Seeds need at least 60 days of moist stratification for germination. Each mericarp has 5 ribs. The ribs are not winged.