Trending
You are at:Home»Fruits»Facts about Indian Plums 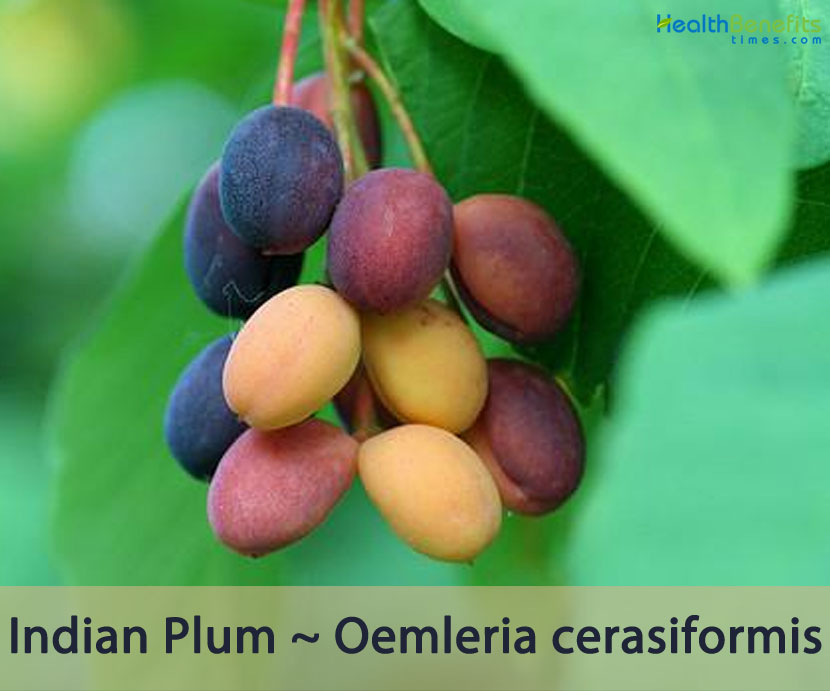 Indian Plum scientifically known as Oemleria cerasiformis is a deciduous shrub to small tree belonging to Rosaceae (Rose family) and is the sole species in genus Oemleria. The plant is native to Pacific coast and ranges of North America, from British Columbia, Canada to Santa Barbara County, California, U.S.A.; it is among the first plants to leaf out and flowers early in the spring.  It is named for Augustus Gottlieb Oemler (1773-1852), a German-American pharmacist and naturalist. Previous scientific names include Nuttallia cerasiformis Torr. & A. Gray ex Hook. & Arn. and Osmaronia cerasiformis.

Some of the well-known common names of the plants are Oregon plum, Indian peach, Osoberry, bird cherry. Genus name honors Augustus Gottlieb Oemler (1774-1852), German-American pharmacist and naturalist. Specific epithet from Latin means in the shape of a cherry in reference to the small plum to cherry-like fruits. The fruits of osoberry are edible and resemble small plums which are dark blue when ripe. Indigenous peoples of the Americas include osoberry in their diets, make tea of the bark, and chew its twigs to use as a mild anesthetic and aphrodisiac.

Indian Plum or osoberry is a fast growing but relatively short-lived perennial deciduous shrub or small tree that normally grows about 1.5- 5 meters tall. The plant is found growing in moist, open woods, along the edges of open woods, thickets and along roadsides or stream banks, slopes, hillsides, rocky valleys and canyons, chaparral and coast to shaded conifer forest. The plant occurs mainly in cool, damp forests on acidic to weakly alkaline, nutrient-rich, sandy-loamy to loamy, humus-rich soils. It is also found in bushes and hedges. It prefers light-shady locations with a mild winter. There are offshoots formed. The smooth bark is reddish-brown to dark-gray. The bark of the slender twigs is bare, initially green, later turning reddish-brown and has clearly visible orange lenticels. The terminal buds are 7 to 9 millimeters in length and the side buds are shorter.

The alternate leaves are arranged in a petiole and a leaf blade. The petiole is relatively short with a length of 5 to 15 mm. The simple, entire, gray-green leaf blade is 5 to 13 centimeters long and 2 to 5 centimeters wide and lanceolate, elliptical to narrowly obovate with a pointed base and a pointed upper end. The smooth leaf edges more or less rolls down. The underside of the leaf is lighter and sometimes fuzzy hairy and balding. The top of the leaf is bright green. In spring it is one of the earliest deciduous species in its home range. The freshly sprouted leaves taste like cucumber, while the older leaves become bitter. Young leaves stand upright or at a 45 degree angle from the twig. The stipules fall off early. The color of the leaves turns to a shade of sunny yellow during the month of August but it does cling on to the branch until the start of autumn.

Greenish white flowers approximately 1 cm across. 5 petals, 15 stamens in distinct series somewhat bell-shaped, appear often before the leaves in very early spring. The flowers hang in 5 to 10 cm long clusters.  Flowers are like many natives, usually males on one plant and females on others, except on good years then you will find both on the same plant. The flower cup (hypanthium) is 3 to 4.5 mm high. The five free, white, nailed petals are 3 to 6 mm long, with those of the male flowers being slightly larger than those of the female. In the male and hermaphrodite flowers there are three circles with five stamens each; they protrude somewhat from the corolla. There are five free carpels. Most of the flower cup and style wither soon after pollination. The female plant produces flowers that smell like watermelon, and this plant produces the fruit.  The male flower is said to smell something like cat urine. Indian-plum flowers at the same time as the genus Ribes which includes the edible currants (blackcurrant, redcurrant, white currant, gooseberry, and several hybrid varieties).  These plants attract the same pollinators.

Fertile flowers are followed by fleshy drupes, like small plums with a large stone, egg-shaped and somewhat bean-shaped with a length of 5 to 15 mm. Fruits are initially peach-coloured, ripening to yellow and turns bluish-black when ripe with a whitish bloom. One to five stone fruits form per female flower. Single seeds are formed per drupe. The local residents of America include osoberry in their daily diet; apart from that they make tea of the bark of the tree. 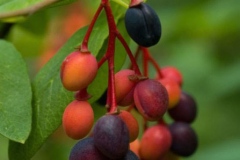 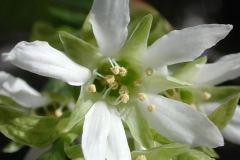 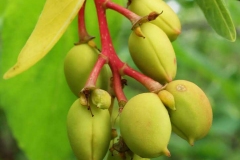 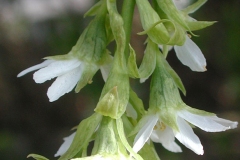 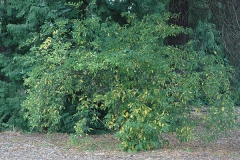 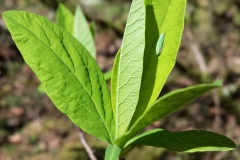 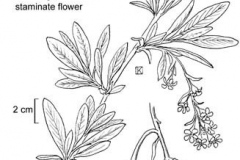 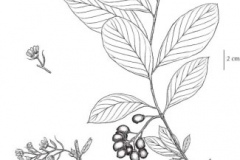 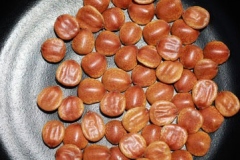