Trending
You are at:Home»Fruits»Traditional uses and benefits of Jackalberry 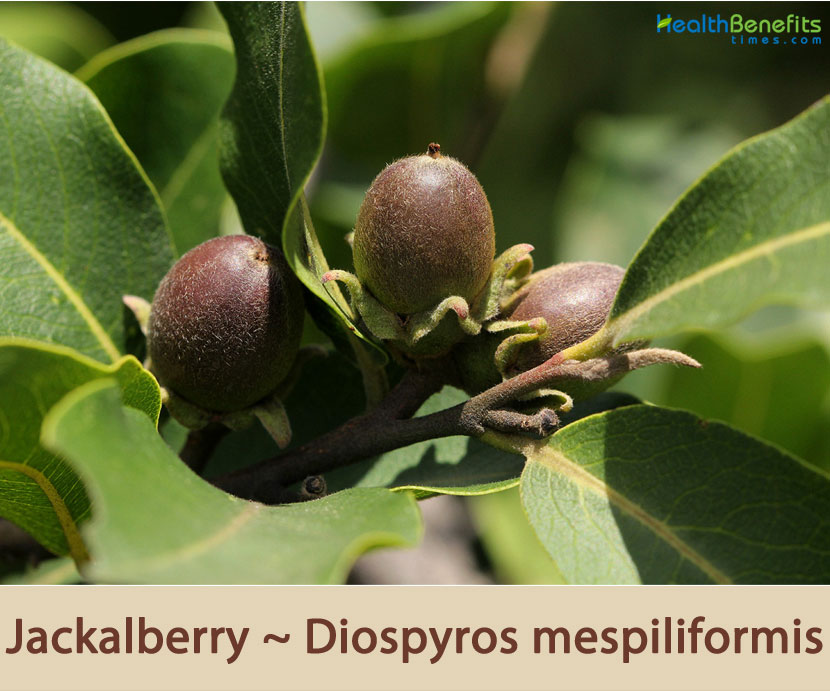 The genus name Diospyros means divine pear, and the species name mespiliformis according to Venter 1996 is derived from mesos, meaning half and pilos, meaning bullet, referring to the shape of the fruit. The wood is highly prized and therefore commonly harvested from the wild and traded internationally. The tree is an important source of food, medicine and other commodities for the local people and is often kept unfelled when land is being cleared for farming. It is thus to be found in a state of being tended if not actually cultivated near villages.

Jackalberry is an evergreen or semi-deciduous, small to medium-sized tree that normally grows about 25 – 40 m tall with dense, rounded and buttressed stem. Bole is usually straight and cylindrical, branchless for up to 18 m and up to 150 –200 cm in diameter. The plant is found growing in riparian forest, more rarely on termite mounds or rocky outcrops, dry semi-evergreen forest, drier northern borders, woodland, wooded savanna, scattered tree grassland and interfaces with fringing forest or woodland also dryer Combretum woodland and woodland in rocky places.

The trunks grow straight and high, with the first spreading branches growing far above the ground. The mature trunks from older and heavier trees have fluted, flattened ridges along the trunk which strengthen them. Bark is blackish or dark brown when young, turning dark grey as the tree matures, with a rough texture, forming deep horizontal grooves. They are slash pinkish brown or black outside and pink inside. Young branchlets are green, tomentellous with pinkish-white hairs, glabrescent later. They have a dense, dark green and spreading crown.

Wood is hard, and very strong, and almost completely resistant against termites. The heartwood is fine-grained and good for floors, and high quality furniture. It varies in color from light; reddish brown to almost black. The dark grey bark develops longitudinal fissures with age.

The alternate, mostly narrowly elliptic to narrowly oblong-elliptic or oblong to oblanceolate-elliptic leaves often remain on the tree until the new leaves form. Evergreen tree has simple leaves that are up to 3.5-19 cm. long and 1.5-7.5 cm. wide. Leaves tend to group at the ends of branches.  The thin, translucent, pubescent (hairy) new leaves are an attractive bright reddish color particularly in young plants. The blade of mature leaves is leathery. Mature leaves are glossy dark green above and lighter green below.  They are thickish, leathery and may turn yellow in autumn.  Veins are delicate and are more visible below. The vein pattern is best seen when a youngish leaf is viewed against a strong light. This photo shows that the lateral veins loop before reaching the margin. Base is rounded, narrowed or tapering and may be asymmetric. Silky hairs may be present. Short petiole is up to 1 cm long and Stipules are absent.

The cream to pale yellow, narrowly bell-shaped and fragrant flowers are actinomorphic, regular and symmetrical. Flowers arise in leaf axils.  Each flower is up to 1 – 2 cm long.  Flowers are dioecious (unisexual floral structures with male and female parts on separate plants).  The Perianth (the calyx and corolla) is divisible into 3 or more identical sectors.  The 5-lobed calyx is hairy and attached to the corolla.  The whitish, urn-shaped corolla appears as a single piece with 5 united petals.  It has short lobes and is externally hairy.  Male flowers are in small sessile bunches, are more numerous and have a rudimentary ovary.  The solitary female flowers have a short pedicel and a single pistil (a unit of the Gynoecium, the female element of the flower, composed of the ovary, style and stigma), which rests on a hairless somewhat fleshy disc. The Ovary is superior. Creamy grey hairs are present on the calyx and pedicels.  Pollinators are mainly insects, including bees.

Fertile flowers are followed by solitary, ovoid to almost spherical fleshy Berry.  It is up to 3 cm in diameter. Berry has a conspicuous fairly deeply lobed accrescent (increasing in size with age) calyx with recurved triangular lobes, reaching about a third of the way up the fruit. Fruit terminates with a persistent style forming a short, narrow tip.  Short, soft hairs are present only when young.  Green berry becomes yellowish or purplish when ripe.  The surface remains smooth or it may become slightly wrinkled.  It has a tough skin with a thin layer of flesh.  At maturity, it is dry and dehisces slowly.  About 3 – 6 smooth seeds, up to 1- 3 cm long, are formed.  Each seed is compressed, oblong-ellipsoid, reddish brown, mottled and flattish. Seeds have a visible groove that is nearly straight.

Diospyros bussei Gürke is a small evergreen tree up to 15 – 18 m tall, occurring in open woodland and wooded grassland in Somalia, eastern Kenya and eastern Tanzania. Its dark brown heartwood is used in ship building and for poles and walking sticks. The fruit is edible.

Diospyros ferrea (Willd.) Bakh. is a small tree up to 15 m tall, with bole up to 30 cm in diameter. It is even more widespread than Diospyros mespiliformis, occurring in a wide variety of habitats from Senegal east to Kenya and south to Angola, Zimbabwe, Mozambique and Madagascar, but also in tropical Asia, Australia, Melanesia and Polynesia. In tropical Asia, where Diospyros ferrea trees can reach larger dimensions, the heavy wood is used for joinery, furniture, musical instruments, sporting goods, utensils, carvings and turnery. Heartwood can be blackish, often with yellowish streaks. The fruit pulp of Diospyros ferrea is edible. In Madagascar leaf decoctions are used to treat stomach-ache.

Diospyros greenwayi F.White is a shrub or small tree up to 15 m tall, endemic to eastern Kenya and eastern Tanzania. Its wood is occasionally used for poles in house building.

Diospyros kabuyeana F.White is an evergreen small tree up to 15 – 25 m tall, endemic to moister forest and riverine forest in eastern Kenya and Tanzania. Its wood is used in house construction, especially for posts, and has been used for making bows.

Diospyros quiloensis (Hiern) F.White is a small deciduous tree up to 10 m tall, native to Tanzania, Malawi, Zambia, Zimbabwe and Mozambique. The black heartwood is distinctly demarcated from the yellowish sapwood and is in great demand for carvings, e.g. for masks and animals for the tourist industry. The wood is sometimes also used in construction because of its great durability. The fruit pulp is edible.

Diospyros senensis Klotzsch is a spiny shrub or small tree up to 12 m tall, occurring in dry deciduous forest and thickets in southern DR Congo, Malawi, Zambia, Zimbabwe and Mozambique. Its tough wood is used in construction and for tool handles. Root infusions are applied to the chest of children to treat colds.

Diospyros squarrosa Klotzsch is a shrub or small tree up to 12 m tall, occurring from southern DR Congo, Somalia and Kenya south to Zimbabwe and Mozambique. The wood is used for poles and tool handles. The fruit pulp is edible. Decoctions of roots, bark and leaves are administered to treat malaria.

Diospyros verrucosa Hiern is a shrub or small tree up to 15(–18) m tall, endemic to southern Tanzania and northern Mozambique. Its wood is used for poles in house construction and for utensils. The fruit pulp is edible. 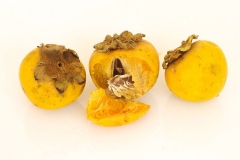 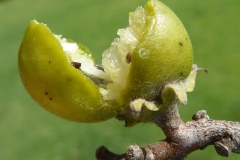 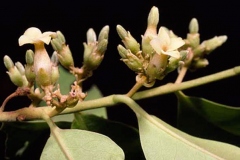 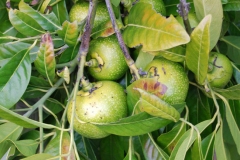 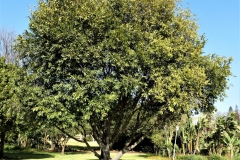 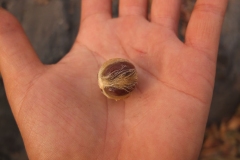 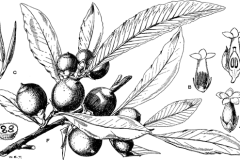 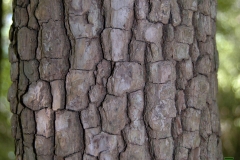 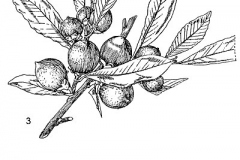 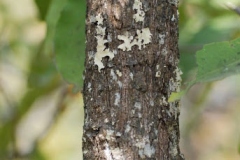 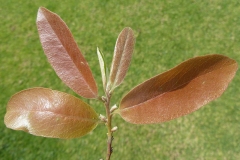 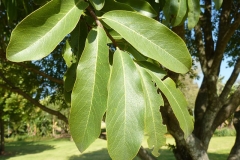 Traditional uses and benefits of Jackalberry