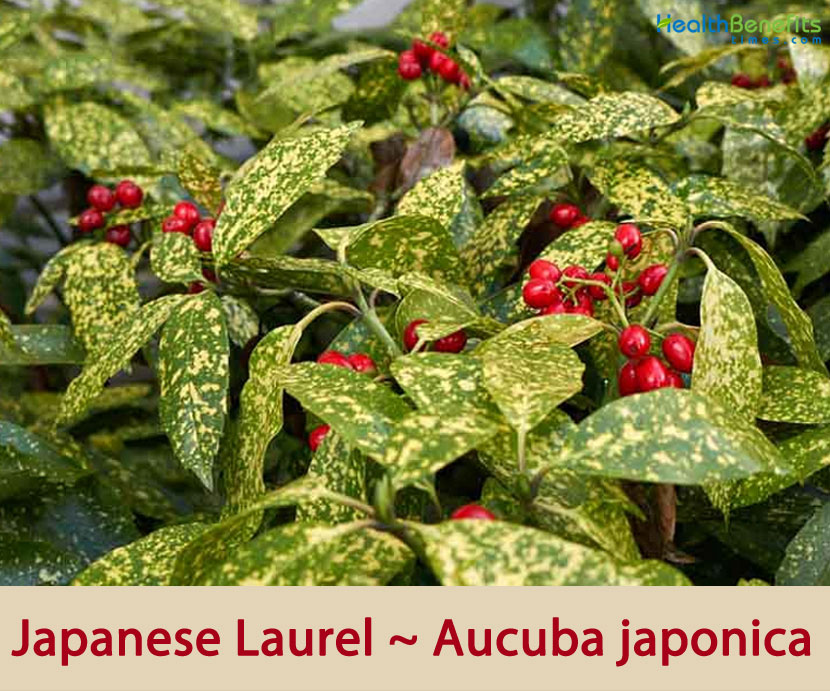 Aucuba japonica, commonly called spotted laurel or gold dust plant, is a rounded, shade-loving, evergreen shrub in the Dogwood family (Cornaceae). The plant is native to rich forest soils of moist woodland areas, thickets, by streams and near shaded moist rocks in China, Korea, and Japan. It was later introduced to England in 1783 by John Graeffer. It was brought to the United States in the 1860’s by Robert Hall, the same person who was unfortunate enough to introduce Hall’s honeysuckle, which now runs rampant across the eastern U.S. woodlands. Some of the well-known common names of the plant include spotted laurel, Japanese laurel, Japanese gold dust tree and Japanese aucuba. Genus name comes from the Latinized version of the Japanese name aukubi for these shrubs. Specific epithet means native to Japan.

Japanese Laurel is a rounded, dense, upright somewhat rounded, shade-loving, evergreen shrub that normally grows about 1–5 m (3.3–16.4 ft.) tall. The plant is found growing in dense forests, thickets, stream sides, near shaded moist rocks and moist valleys. The plant prefers soils that are high in organic matter and evenly moist in partial to full shade but will tolerate poor soils and urban conditions like air pollution. It will thrive either in loam, chalk or sand, soil which is moist but well-drained.

Leaves are glossy, leathery, elliptic to narrow-ovate in appearance, and grow opposite to each other along the branch on 1 cm (0.4 inch) long leaf-stalk. They are 8 – 25 cm long and 2 – 12 cm wide and have coarse marginal teeth on the upper half of each leaf and pinnate venation. Though often a vibrant green, certain cultivars of Aucuba japonica are well known for having variegated leaves. They turn an attractive yellow in autumn. The leaves have a glabrous surface. Many popular cultivars, such as Aucuba japonica ‘Variegata,’ feature yellow or golden spots on the leaf. These plants form dense, upright, rounded shrub with a thicket of erect to arching shoots with limited branching.

Tiny purple-maroon flowers with creamy white anthers bloom in early spring (March-April). The flowers are small, non-flashy, 4–8mm (0.15–0.31 inch) diameter; with four purplish-brown petals and four sepals. They are produced in clusters of 10-30 in a loose cyme. Plants in this genus are dioecious (male and female flowers on separate plants). Male flowers appear in upright terminal panicles (cymes to 4 1/2” long). Female flowers appear in shorter clusters from the leaf axils. 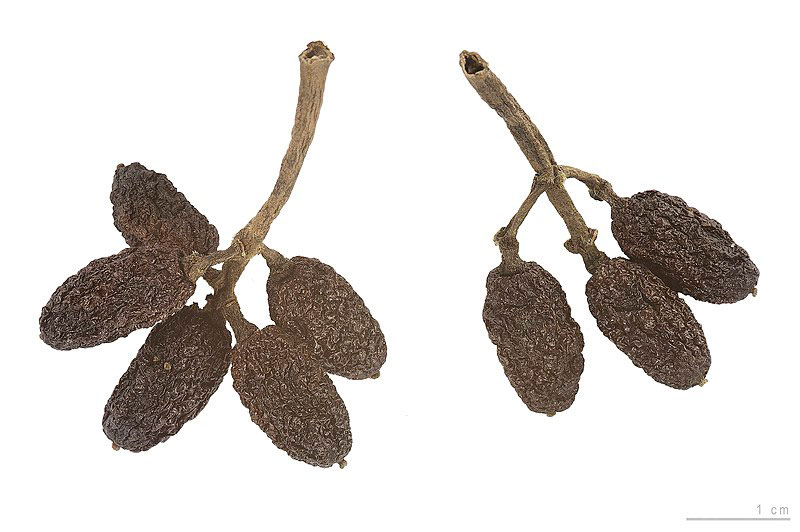 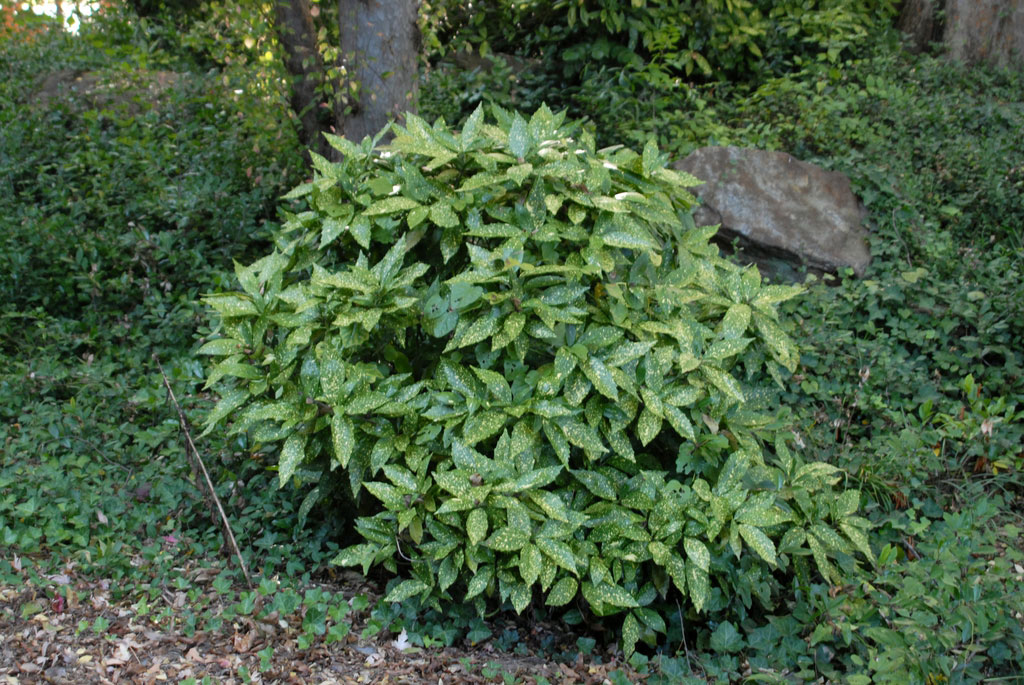 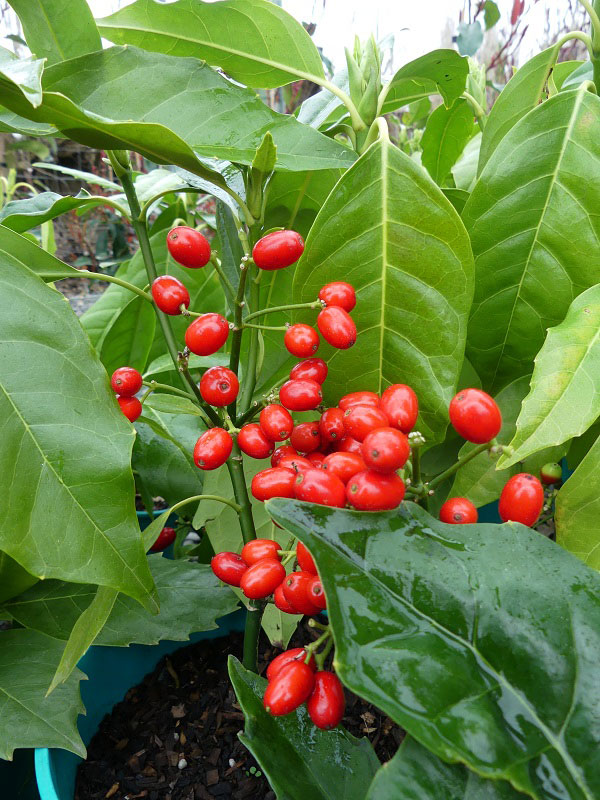 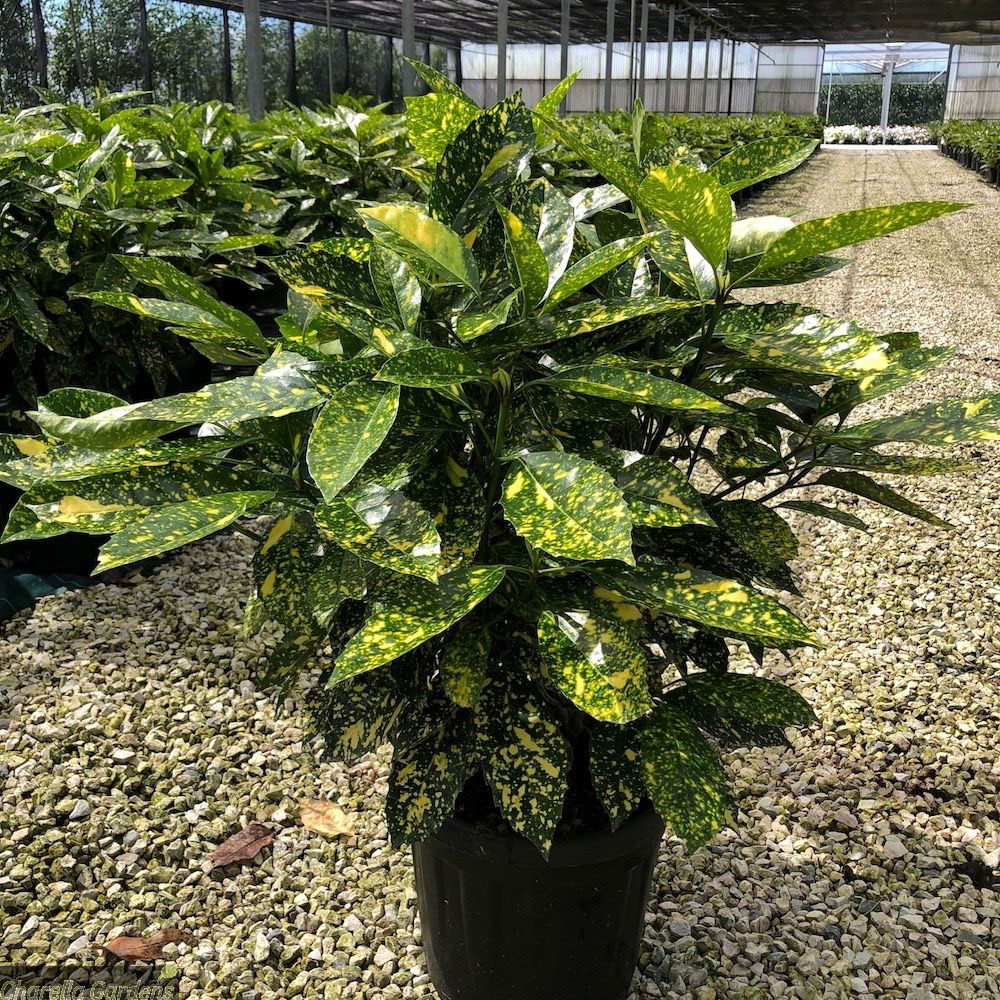 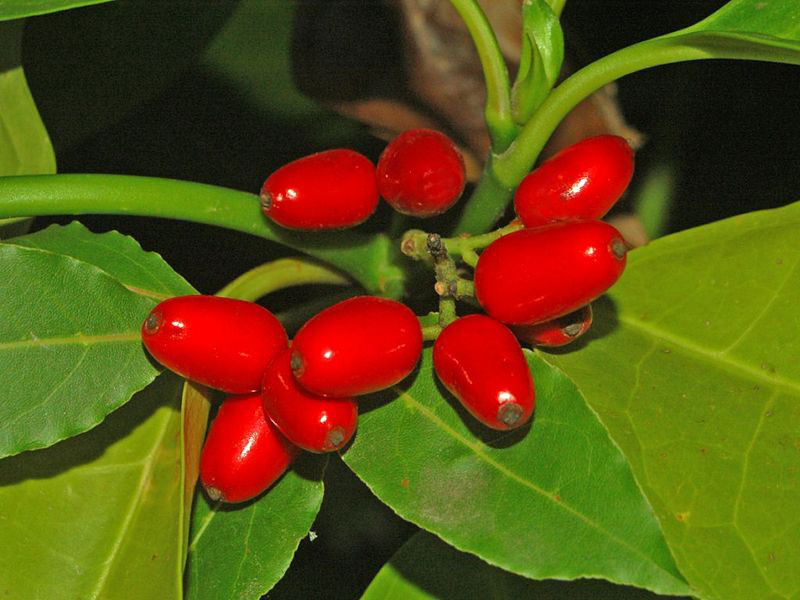 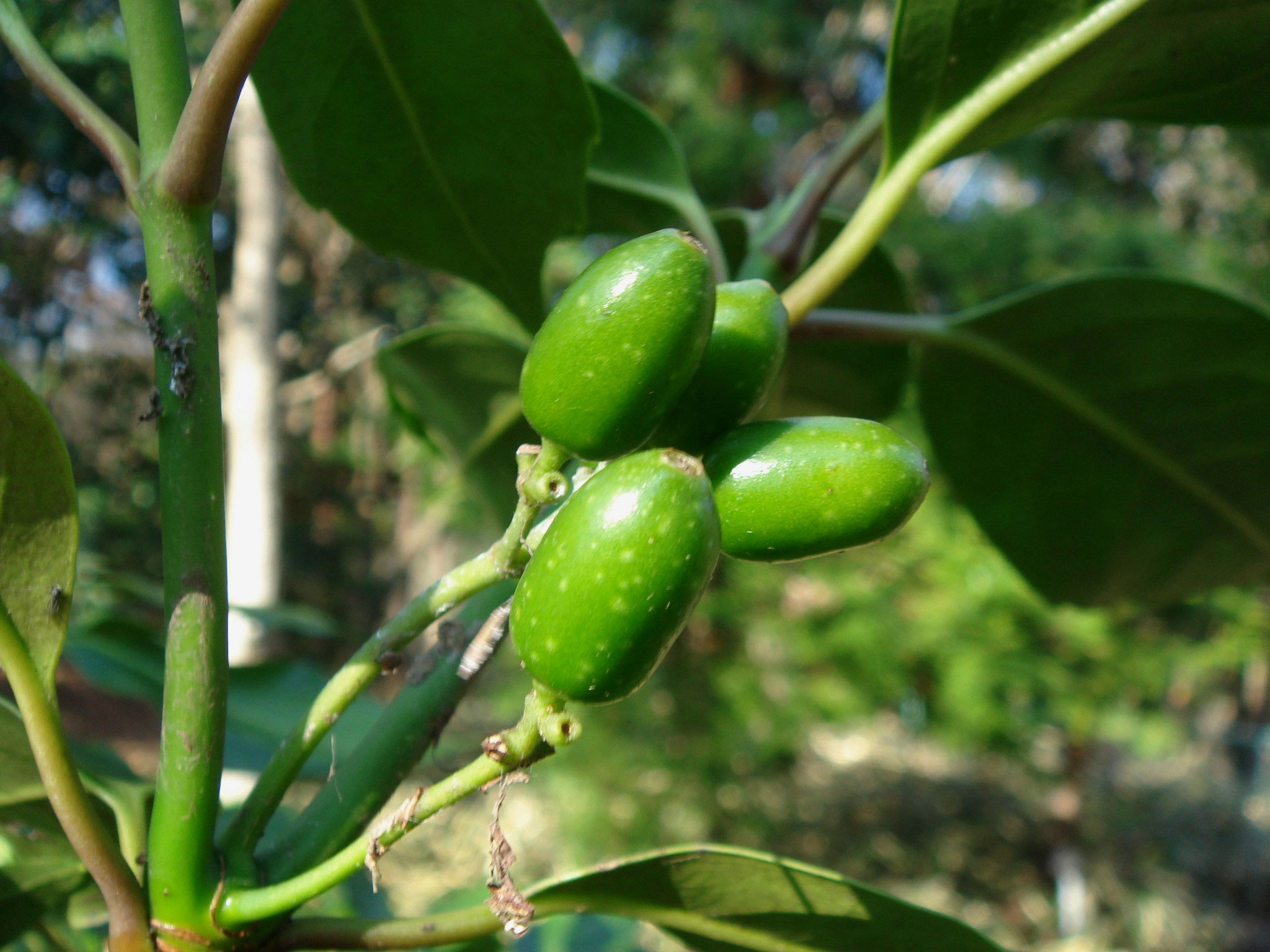 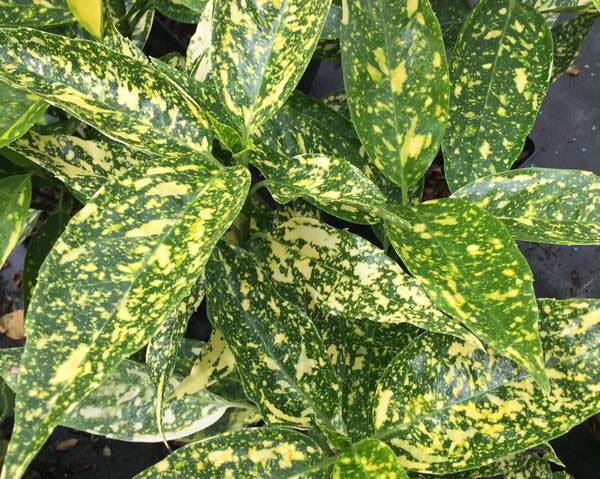 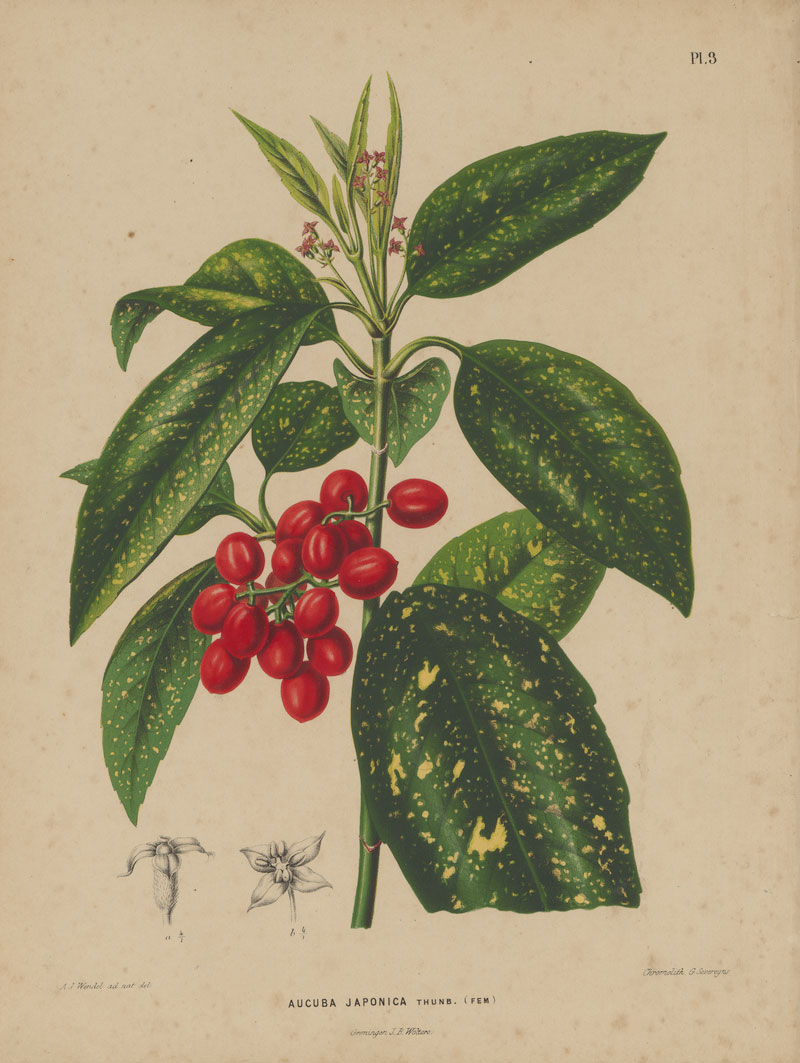 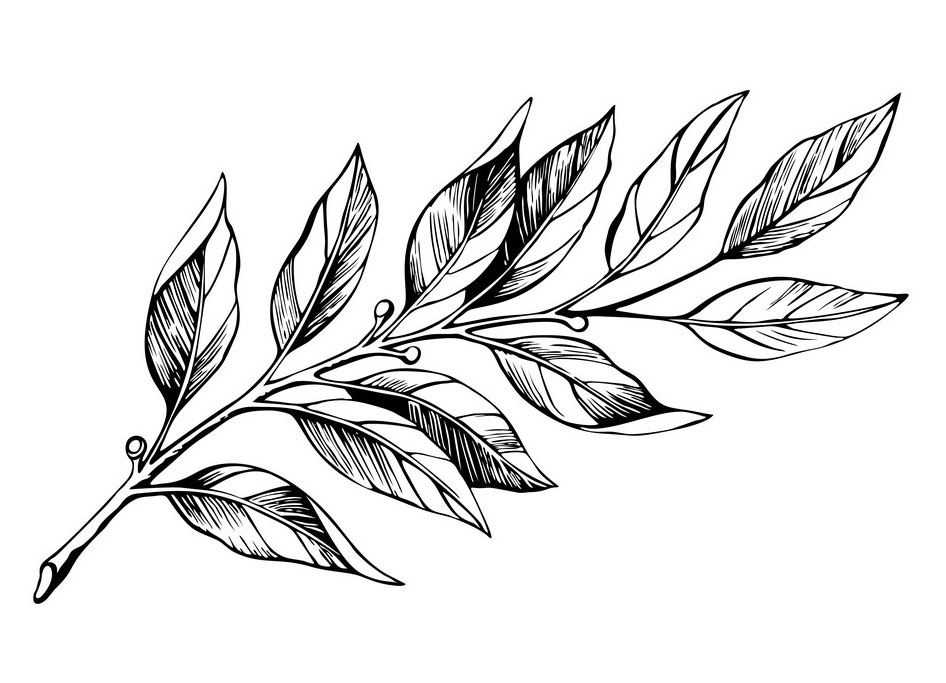 From October to February, pollinated female flowers are followed by ellipsoid, one-seeded, berry-like drupes approximately 1cm (0.4 inch) in diameter which ripen to red in fall. Fruits often persist on the plant until spring. The fruit is not overly popular among animals, and is often hidden by foliage.

The plant was introduced into England in 1783 by John Graeffer, at first as a plant for a heated greenhouse. It became widely cultivated as the “The Gold Plant”.

Aucuba japonica Variegata is female, and it was a purpose of Robert Fortune’s botanizing trip to newly-opened Japan in 1861 to locate a male. It was located in the garden of a resident at Yokohama, and sent to the nursery in Bagshot, Surrey.

The mother plant was fertilized and displayed, covered with red berries, at Kensington in 1864, creating a sensation that climaxed in 1891 with the statement from the Royal Horticultural Society’s secretary, the Rev. W. Wilkes, “You can hardly have too much of it”. This view is not held today when it is a rather poor cousin of other evergreen shrubs.

Various forms are available, many with useful variegated leaves. Listed below is some of the popular one

It is a hardy variegated evergreen shrub (female); leaves are speckled golden-yellow. It makes a dense rounded bush. The plant requires a male plant nearby to produce red berries.

It is a compact female variety with smaller than usual green leaves, with the upper half toothed.

It is a strikingly variegated male form with elongated central golden splashes.

It is a narrow leaved, free-fruiting form.

Crown rot is caused by the soil-borne fungus Sclerotium rolfsii. This fungus attacks and kills plants at the ground level when humid conditions resulting from a tight plant canopy or debris near the stem persist. Eventually, the black decay (necrosis) may extend several centimeters upwards in the stem. Foliage of affected plants wilts and the plant dies quickly. This fungus can attack both large and small plants.

Root rot of Aucuba japonica is caused by the soil-borne fungi Phytophthora cinnamomi and Phytophthora citricola. Above ground symptoms are similar to crown rot, however, the roots are usually more extensively rotted, white fungal growth and sclerotia are absent and decay may not extend as far up the stem. Diseased plants eventually die.

Several nematodes cause root damage to Aucuba japonica. The root-knot nematode (Meloidogyne sp.) is the most common and causes the development of galls on the naturally thick roots. These and other nematodes reduce vigor and growth, as infected plants cannot take up water or fertilizer as well as healthy plants.

A nonpathogenic root rot may also develop on Aucuba japonica growing in soil very high in organic matter and soil that is poorly drained. Excess fertilizer placed too close to the crown of the plant can also cause stem or root injury.

Because eradicating these bacterial diseases is difficult or impossible, the best recourse for infected plants is to remove and destroy them. The treatment begins with good sanitation to prevent the spread of the disease. Destroy affected plants and remove the surrounding soil and garden debris that has come in contact with them. Do not transplant any nearby plants to other parts of the garden. Quarantine new plants by growing them in a bed that is isolated from the rest of the garden until proven that they are disease-free.

Do not plant Aucuba japonica where other Aucubas, Azaleas or Rhododendrons have died before.

Foliage problems, such as wilting or necrotic spotting, may reflect a root problem or other stress condition. Aucuba japonica grows best in shaded areas. Plants growing in exposed areas may develop black leaf spots or blotches. Dieback characterized by total decay of leaves, petioles, and branches often occurs on exposed plants in early spring. This can be caused by exposure to full sun combined with cold injury. A weakly pathogenic fungus is often found in such tissue and is common on many woody ornamental plants under environmental stress.

Significant dieback is often a sign that the plant may be under stress from root rot, crown rot, nematodes or other factors.

These problems are much more severe in poorly drained and waterlogged soils. Control involves improving the soil drainage wherever possible and drenching with a suitable soil fungicide. Make sure the soil crust is broken beneath the plants so the fungicide will penetrate down into the root zone of the plant.