Trending
You are at:Home»Herbs and Spices»Health benefits of Javanese Turmeric 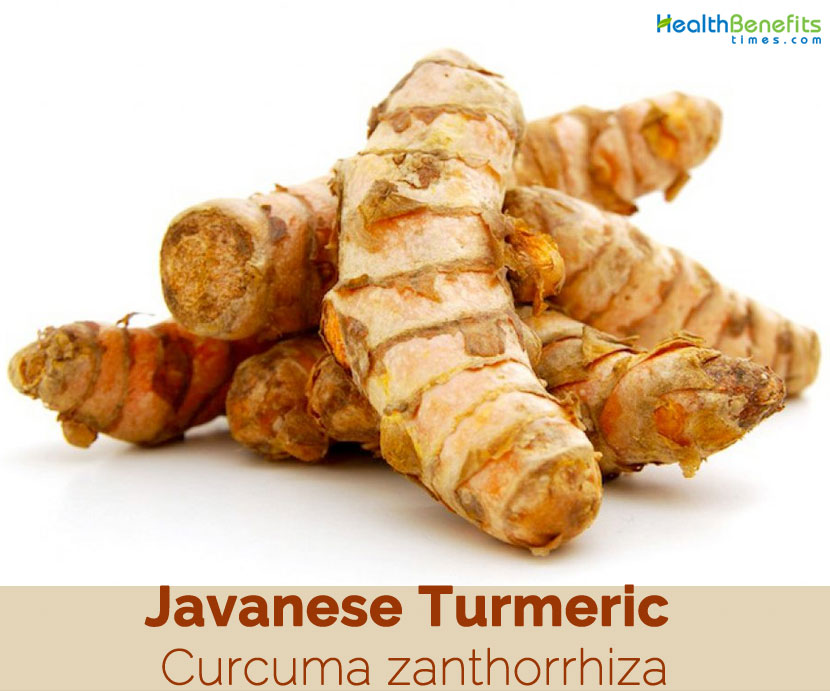 Curcuma zanthorrhiza commonly known as temulawak, Javanese ginger, or Javanese turmeric is an erect, herbaceous perennial plant species, belonging to the ginger family. The plant originated from Indonesia, more specifically from Java Island, out of which it spread to several places in the bio-geographical region Malesia. Currently, most of the temu lawak is cultivated in Indonesia, Malaysia, Thailand, and the Philippines. Outside of South East Asia, cultivars may be found also in China, Indochina, Barbados, India, Japan, Korea, the United States and some countries in Europe. It is known in Javanese as temulawak, in Sundanese as koneng gede and in Madurese as temu labak. False Turmeric, Giant Curcuma, Indian Saffron, Java Turmeric, Javan Turmeric, Javanese Turmeric, Curcumine, gedè, haridra, Indian saffron, jiang huang, shu gu jiang huang, temu lawak and tumulawak are some of the popular common names of the plant.

Curcuma zanthorrhiza is used as a medicinal plant. It has been traditionally used to treat stomach diseases, liver disorders, constipation, bloody diarrhea, dysentery, children’s fevers, hemorrhoid, and skin eruptions. It has been used by Indonesian ancestors for food, medicinal purposes, and as a tonic. According to one source it is an effective preventive and pesticide of mushroom mites.

Javanese Turmeric is an erect, robust, tillering and herbaceous perennial plant that grows about 1-2 m tall. The plant is found growing in thickets and teak forest. It prefers moist fertile, well-drained, humus-rich soil. Roots are numerous, fleshy and terete, up to 30 cm long, at the apex usually shortly swollen into a globose or ellipsoid tuber up to 2.5- 5 cm. Rhizome is a fleshy complex with an erect ovoid structure (primary tuber) at the base of each aerial stem; ringed with the bases of old scale leaves and when matures bearing numerous lateral rhizomes which are again branched. Primary tuber is 5-12 cm long and 3-10 cm in diameter. Lateral rhizomes are much smaller, often without particular shape, clavate or cylindrical, 1.5-10 cm long and 1-2 cm thick, outside yellowish or orange-red-brown turning greyish when older, inside intense orange or orange-red, younger parts paler.

Leaf shoots bear up to 8 leaves surrounded by blade less sheaths, Leaf sheaths form a pseudo-stem. Sheaths are up to 75 cm long and green. Petiole is 0-30 cm long, its apex passing gradually into the blade.  Blade is elliptical-oblong or oblong-lanceolate, 25-100 cm long and  8-20 cm wide, dark green above with a more or less intensely reddish-brown central streak 1-2.5 cm wide, light green or sea-green below, glabrous, densely white-dotted.

Inflorescence is lateral, sprouting from the rhizome next to the leaf shoot and are spike-like. Peduncle is 10-25 cm long, covered by rather large bladeless sheaths. Flower spike  is cylindrical, 15-25 cm long, 10-20 cm in diameter and is provided with 15-35 bracts arranged spirally, each containing a flower except the 5-6 upper ones; bracts in their lower half adnate to each other, the basal parts thus forming closed pockets, the free upper parts more or less spreading. The 10-20 upper bracts are purplish and longer and narrower than the 10-20 light green lowest bracts. Bracteoles are small, membranous, surrounding the flowers.

Calyx is small, 1-1.5 cm long; corolla is 4-6 cm long, lower half tubular, upper half much widened, light red, 3-lobed with 2 equal anterior lobes and a larger ventricose posterior one. Labellum is sub orbicular, weakly 2-lobed, about 2 cm in diameter, yellowish with a darker yellow longitudinally furrowed central streak. Staminodes are large and wide, connate with the base of the stamen, yellow-white. Filament is short and wide, anther thick, at the base with claw-like spurs.  Ovary is white, pubescent, 4-5 mm long. 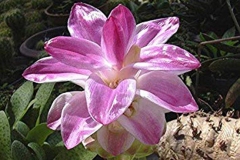 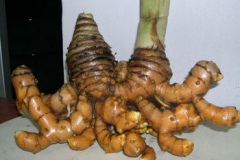 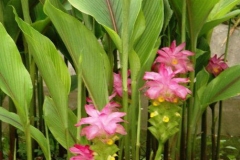 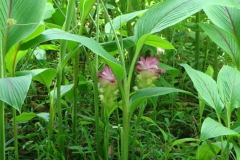 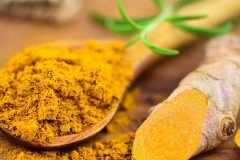 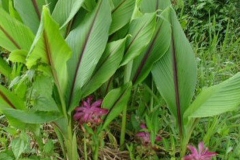 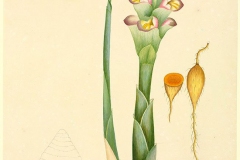 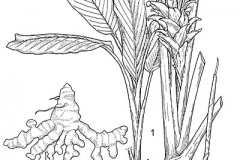 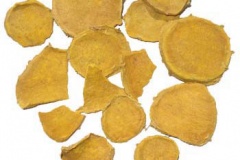 Various health disorders in the digestive tract such as flatulence, dyspepsia, and indigestion can be overcome with Javanese Turmeric. Research states that patients who experienced health problems found in the ulcerative colitis disease is getting better by taking Javanese Turmeric supplements on a regular basis.

Javanese Turmeric can control, prevent, or even kill various types of cancer including colon, breast, and prostate. Research also showed that Curcuma considerably prevents the growth and spread of prostate cancer. The herb is supposed to work by inhibiting the growth of blood vessels that aids cancerous growth. Its preventive effects are assumed to be supported by its antioxidant activity, which protects your cells from damage.

All parts of Javanese Turmeric are effective but the rhizomes are most widely used. Rhizome consists of more than one hundred kinds of compounds such as amylase, phenolase, fat, starch, minerals, phenol derivatives (curcuminoids) and essential oils. These compounds proved to be effective in optimally improving endurance.

Javanese Turmeric has an astringent attribute that causes the reduction in the pores of the skin so that it indirectly will prevent the appearance of acne on the skin surface.

Kurkuminoid has the efficacy of treating disorders of liver health and prevent fatty liver cells. Several scientific studies and clinical trials have been carried out by scientists from both Indonesia and the world, and the result generally supports the use of Javanese Turmeric as a traditional medicine that can use to liver disease and stiff.

In the world of physiotherapy, Javanese Turmeric is classified as an adaptogen, a harmless substance that can encourage increased resistance to toxins or which can affect physically, chemically and biologically. In general, it has the effect of normalizing the affected tissue.

Osteoarthritis is one of the most common causes of disability in the US. Research indicated that taking Javanese Turmeric for 4 weeks could help relieve pain associated with osteoarthritis among the people who already have the condition.

Javanese Turmeric also has the benefit of preventing the action of enzymes or other components that cause the growth of tumor cells. So the regular use of Javanese Turmeric in tumor sufferers is the right step.

10. Prevent the appearance of dengue fever

Essential oil content of Javanese Turmeric has the use of inhibiting Aedes aegypti mosquitoes to get closer to your body. This will cause you to avoid the danger of dengue fever because this type of mosquito is a carrier of dengue virus.

Prepare the 2 Javanese Turmeric, then wash and Peel. Sliced and boiled with ½ liter water and add a little Palm sugar. Boil until the water becomes half. Drink this concoction twice a day.

Prepare ½ Rhizome of Javanese Turmeric, and then wash clean. Peel and slice Javanese Turmeric. Boil 5 cups of water and combine Palm sugar to taste. Boil until the water becomes half. Take this herbal drink three times a day.

Javanese Turmeric is also effective to help cope with muscular fatigue, especially for those of you who do exercise serious time fitness.

Appropriate dose of Javanese turmeric depends on several factors such as the user’s age, health, and several other conditions. At this time there is not enough scientific information to determine an appropriate range of doses for Javanese turmeric. Keep in mind that natural products are not always necessarily safe and dosages can be important. Be sure to follow relevant directions on product labels and consult your pharmacist or physician or other healthcare professional before using.