Trending
You are at:Home»Herbs and Spices»Facts about Jewelweed – Impatiens capensis 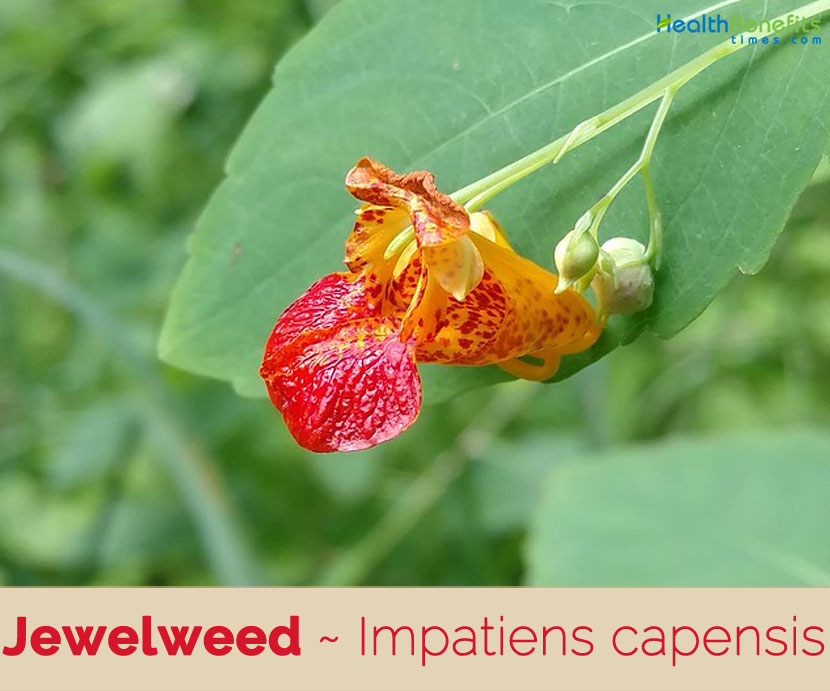 Common jewelweed or spotted jewelweed scientifically known as Impatiens capensis is an annual plant belonging to Touch-Me-Not family (Balsaminaceae). The plant is native to eastern North America (but considered invasive in the Pacific Northwest). Garden balsam, Jewel balsam weed, Jewel weed, Jewelweed, Touch-me-not,  Wild Balsam, Balsam-weed, Impatiens pallida, Pale-touch-me-not, Spotted touch-me-not, Slipperweed, Silverweed, Wild Lady’s Slipper, Speckled Jewels, Wild Celandine and Quick-in-the-hand are some of the well-known common names of the plant. Genus name comes from the Latin word impatiens meaning impatient in reference to the violent seed discharge from the ripe pods. Specific epithet means of the Cape of Good Hope, South Africa, but this is a misnomer here as this plant is native to North America. It was initially thought that the plant originated in that area. The common name Jewel-weed refers to the silvered appearance of rain or dew drops on the leaves. Similarly common name Touch-me-not refers to the fruit which explode when touched, throwing the seed several feet.

Common jewelweed is a tall, erect herbaceous plant that normally grows about 2 to 5 ft. (0.6-1.5 m) tall. The plant is found growing along the banks of rivers and canals, in low-lying moist woodlands, wet woodland borders, shaded riverbanks, roadside ditches, bottomland soils, along creeks, lake, pond, and stream edges, swamp forests, marshes, stream banks, margins of beaver ponds, marshy areas, thickets, ravines often in slightly disturbed areas, including excavations. The plant is easily grown in medium to wet soils in part shade to full shade. It is best in wet, humusy soils in part shade. The plant has shallow root system. Round stems are glabrous (smooth) and succulent, and semi-translucent, with swollen or darkened nodes on some plants. They are rather fragile and break easily. It excludes juice when broken.

The elliptic-ovate leaves are 1 to 3 inches long and up to 1½ inches wide. They are arranged alternately, meaning that they emerge from the stem one leaf per node. Like the stems, they are hairless and somewhat succulent. The leaf has a distinct leaf stalk. The leaf edges have low, widely-spaced teeth. Petioles are 2-4 cm. long.

The leaves are covered with a coating that repels water. Water drops usually roll off the leaves, but in horizontal areas, the water beads up, appearing like jewels in the reflected light. When submerged in water, the leaves take on a silvery sheen. The function of this waterproofing is unknown.

From the axils of the upper leaves, there occur small clusters of 1-3 orange flowers. These flowers are held horizontally on drooping pedicels. Each flower is about 1 inch long and ½ to ¾ inch wide, tube or funnel shaped with a long narrow spur at the back with upper and lower lips. There are 3 sepals and 5 petals (although this is difficult to distinguish). Two lateral sepals are small and membranous; they are light green to light yellow and are located behind the upper lip. The third sepal forms the conical posterior of the flower, including the small nectar spur. This portion of the flower is typically light orange and shiny; the nectar spur usually bends forward to a position underneath the rest of the flower. The petals form the front of the flower and are usually dark orange with reddish streaks or brown dots. One petal forms the upper lip, which is curved upward, while 2 fused petals form the lower lip. The lower lip often is divided into 2 lobes and functions as a landing pad for visiting insects. There are also 2 smaller lateral petals between the upper and lower lips of the flower. A cluster of stamens with white anthers lies beneath the ovary near the upper lip. The blooming period occurs from mid-summer to early fall, and lasts about 2 months. There is no floral scent. 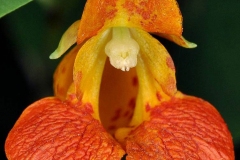 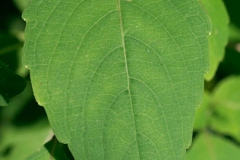 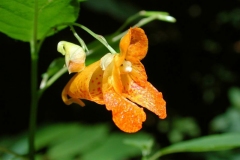 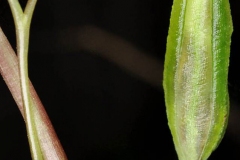 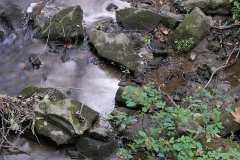 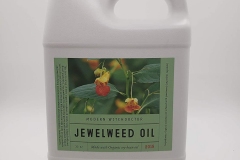 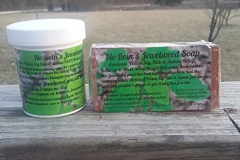 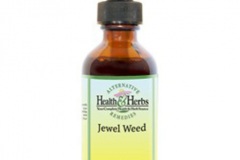 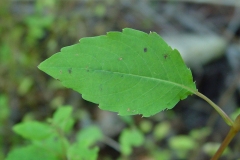 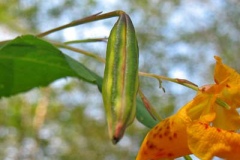 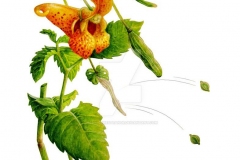 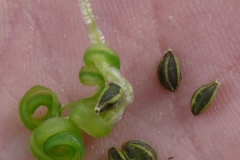 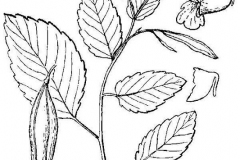 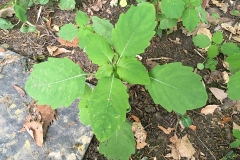 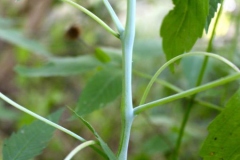 Fertile flowers are followed by small narrow capsule about an inch long and divided into five sections. They are pale green colored capsule. They split apart when touched, throwing seeds in all directions. The seeds are longer than wide, brown with lighter ridges with a warty surface and usually number 3 to 5 per pod. The seeds are dormant through the winter, germinating in April and May.

Traditional uses and benefits of Jewelweed