Trending
You are at:Home»Pulses and Beans»The Kidney Bean: beneficial for digestive health 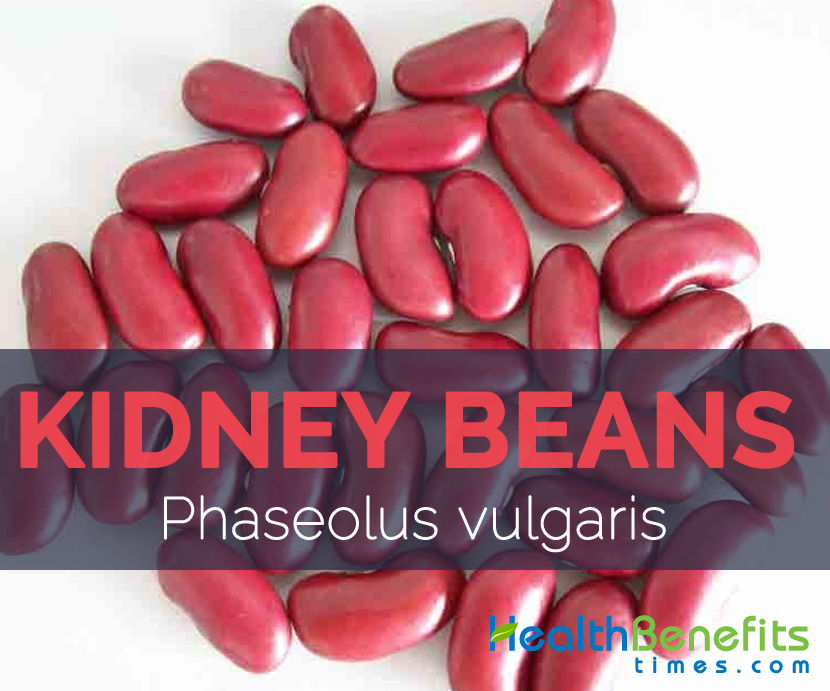 Phaseolus vulgaris, kidney bean, green bean or common bean, is an annual, climbing or sub-erect herbaceous bush in the Fabaceae (legume or bean family) in the genus Phaseolus L, that originated in Central and South America and is currently grown in many parts of the world for its beans, that can be harvested and consumed immature, still in the edible pod, or when mature, shelled, and dried. Kashmiri kidney beans, Red kidney beans and Chitra kidney beans are some popular varieties of Kidney beans. It is often considered the ‘meat of the poor’ and forms the main protein source for individuals in many countries even though it is also common with wealthier consumers. Apart from its mild flavor it is loaded with important essential nutrients, minerals and vitamins.

A kidney bean is an annual, climbing or sub-erect herbaceous bush growing 3 meters long. It is found growing in tropical and temperate zones. It prefers medium-textured, well drained, organic rich soils over 0.5 m deep. It cannot tolerate high soil acidity and the related aluminum and manganese toxicities. It has well-developed taproot along with many lateral roots. It has 2–3 m long pubescent stem, turns glabrescent when old. Leaf is trifoliolate, alternate on 4–9 cm long petiole. Leaflets are 4–16 cm long, 2.5–11 cm broadly ovate to ovate-rhombic, acuminate, and apex, rounded to broadly cuneate base. Flower is papilionaceous, bisexual. Corolla is white, purple, yellow or pale pink, standard 9–12 mm long and glabrous. It is found blooming during July to September.

Kidney bean is usually supposed to have originated in the Americas, with two centers of domestication. The small seed varieties were proposed to have domesticated from small-seeded wild type in Central America and the large-seeded varieties from large-seeded type in the Andean region of South America. Spaniards and Portuguese have taken to Europe, later they also took them to Africa and other parts of the Old World. Currently they are broadly grown in the tropics, subtropics and temperate regions. They are less identified in India, where other pulses are favored.

Kidney beans are loaded with important nutrients, vitamins and minerals which are essential to live a healthy and prosperous life. Including kidney beans on a regular diet helps us to fight with Rheumatoid Arthritis, Relieves Fatigue, good for digestive health, cures acne and many other disease.

Kidney beans are a good source of dietary fiber. Fiber is normally of two types insoluble and soluble, kidney beans include both. Soluble fiber is helpful in reducing the amount of cholesterol you absorb from food and insoluble fiber provides required bulk for good digestive health as well as bowel movements. Research recommends consuming more fluids as soon as you consume kidney beans or any other legumes to assists digestive system properly uses additional fiber.

Kidney beans include higher fiber content which is essential to reduces cholesterol level. Foliate content in kidney beans also helps to lower homocysteine which further decreases the chance of heart attacks, vascular disease and many other heart related diseases. Apart from that magnesium contained in kidney beans helps to maintain healthy functioning of the cardiovascular system.

Rheumatoid Arthritis is a serious long-lasting progressive illness resulting in inflammation of joints and leads to throbbing deformity as well as immovability, particularly in the ankles, feet, fingers and wrists. Frequent Kidney beans intake is best options for decreasing such inflammatory conditions since kidney beans contain reasonable quantity of Copper content. Copper is essential to encourage certain enzymatic activity as well as sustain elastic properties of joints, blood vessels and ligaments.

6. Treatment of the Common Cold

Common cold, simply known as cold, is a viral infectious illness of the upper respiratory tract that mainly affects the nose. Kidney beans intake improves the immune system of our body, which safeguards from colds and coughs. It enables the absorption of iron and hence strengthens the body’s resistance to infection. It also fights against viruses.

Alzheimer’s disease is actually a progressive mental weakening which takes place in middle or old age, because of general deterioration of the brain. It is the main reason of premature senility. Vitamin B is essential nutrients for proper brain function which is found in significant amounts in Kidney beans. It nourishes your brain nerves and cells which can avoid age linked disease such as Alzheimer’s.

Calcium and manganese present in Kidney beans are essential nutrients for maintain strong bones and other trace minerals helps to prevents osteoporosis (condition in which the bones become brittle and fragile due to loss of tissue). Different research have proven that low quantities of folic acid in the diet result in  growth of homocysteine levels and considerably increases risk of osteoporosis-related bone fractures, mainly  hip fracture in women and in men. Vitamin K content is also an acute nutrient for bone health. Vitamin K deficient people are at high risk of suffering from bone fractures problems. Vitamin K has shown to stop fractures in women who have passed through menopause and have previously started to experience bone loss.

Kidney Beans are loaded with antioxidants that are considered to have strong anti-aging properties and to encourage longevity by limiting the damage caused by free radicals. It will help protect the skin and the rest of the body from long-term problems caused by environmental factors as well as unhealthy foods.

Cataract is most common conditions of visual problems. Kidney beans consist of considerable amount of vitamin C. An Insufficient quantity vitamin C within lens of the human eye has been discovered mostly when cataracts are present. An increase of vitamin C intake increases the blood supply to the ocular areas of the body.

Other Traditional uses and benefits of Kidney beans

Kidney bean is an 8–20 cm long by 1–2.5 cm wide, linear-oblong legume which is green, yellow, black, purple, pink, white-pink mottled color. It can be found growing in organic rich, well-drained soils. It is a nutrients dense vegetable which is mainly used for vegetable.