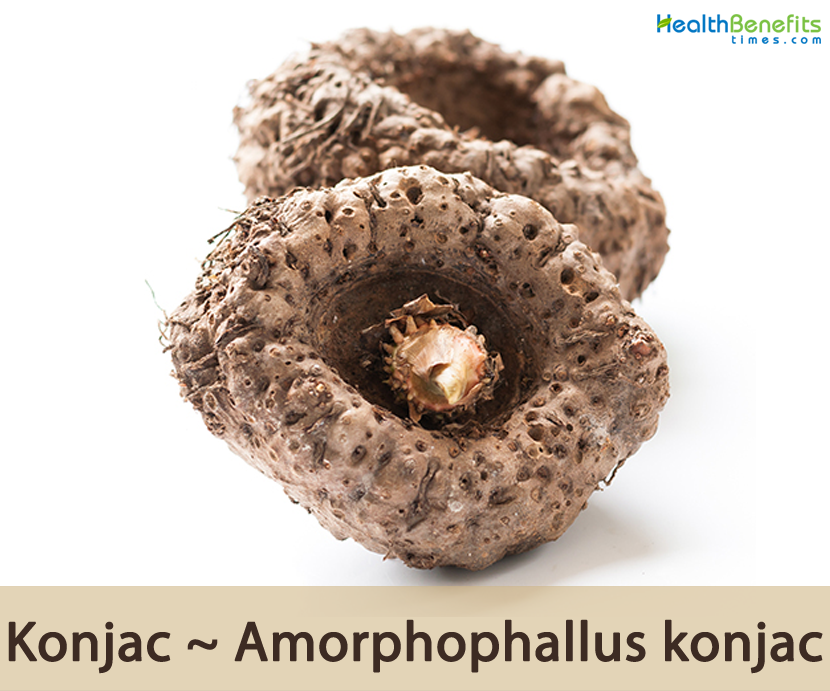 Known scientifically as Amorphophallus konjac, konjac is a tuberous plant that’s sort of like a yam belonging to Araceae Juss. (Arum family). You may also hear it called elephant foot yam because of its unique appearance of the tubers it produces. The plant is native to warm subtropical to tropical areas of eastern Asia, including Vietnam, Japan, southern and south-eastern China, Indonesia and possibly Laos. It occurs wild and cultivated and easily escapes from cultivation. Its cultivation is most important in China and Japan (konnyaku), but it is also known in Indo-China and the Philippines, and occasionally elsewhere (e.g. Hawaii). It is also known as Leopard-palm, devil’s-tongue, Konjac, Snake-palm, Umbrella arum, Elephant foot, Snake plant, elephant-foot yam, konjac, konnyaku potato, voodoo lily, konjaku or elephant yam (though this name is also used for A. paeoniifolius).

The genus name Amorphophallus comes from the Greek amorphos meaning shapeless or deformed and phallus meaning penis. The specific epithet konjac comes from the colloquial name for both the plant as well as the starchy food made from the tubers. Konjac is a root vegetable that grows in parts of Asia. It’s known for its starchy corm, a tuber-like part of the stem that grows underground. The corm is used to make a rich source of soluble dietary fiber known as glucomannan. Starch extracted from the cooked corms is edible and used to make noodles, jellies, fruit candies, vegan seafood, and as a thickening or stabilizing agent in food and drink. The cooked corms also have various traditional medicinal uses. In the Western world, it’s used as a food additive and dietary supplement to lower plasma cholesterol, improve carbohydrate metabolism, and help bowel movements. Recently, you may find it in grocery stores as shirataki noodles.

Konjac is an herbaceous, corm-producing perennial plant which has an underground stem in the form of a corm, a globose tuber having a diameter of 30 cm that produces rhizomatous offsets of 50 cm long and 3 cm thick. The konjac plant’s stem grows up to six feet tall. The plant is found growing in open situations, forest margins, open thickets, secondary forests, moist shady habitats and also village groves. It is considered a unique specimen for containers, mixed borders, or greenhouses. The plant produced on deep, fertile, alluvial soils that are slightly acid and dislikes heavy clay soils. This species is cultivated around the world as an ornamental and grown throughout East Asia as a food crop.

The plant produces globose tuber having a diameter of 30 cm that produces rhizomatous offsets of 50 cm long and 3 cm thick. The tuber can grow up to 50 pounds. The tuber shrinks away as the new leaf grows and during the growing season a new, larger tuber replaces it. The starchy tubers are edible and this plant is grown for food in some parts of the world, processed into a tasteless flour or stiff jelly (which can be used as a vegan substitute for gelatin). The Japanese use konjac flour to make shirataki noodles, and the starch is used to make a popular Asian fruit jelly snack.

The corms will produce a single, highly divided umbrella-shaped leaf with a dull pink type petiole (leaf stem) of 1 m in length that are marbled dark green and dotted white, with highly dissected blades of 2 m, divided into many leaflets that are 3–10 cm long and 2–6 cm in diameter. The petiole can reach 4-5 feet tall and the leaf blade can reach up to 4 feet across. The leaf will turn brown in autumn and then die.

When the corms reach maturity they will produce an inflorescence before the leaf emerges. Its peduncle is 1.1 m long, colored in the same ways as its petioles. The aroid-type inflorescence is made up of a dense, spike-like spadix which bears numerous, small, male and female flowers and a leafy, dark maroon to purple-brown spathe with ruffled margins. The 3-4 feet tall bloom emits a strong odor of rotten flesh for many days that easily attract flies.

Konjac consists of lots of Vitamin, Minerals and other components. Among these some of the vitamins that Konjac has Vitamin C, Vitamin A, Folates, Niacin, Pantothenic acid and Choline. Konjac also contains Omega 3 fatty acids, Omega 6 fatty acids, dietary fiber, sodium and potassium, which have lots of health advantages. Apart from this Konjac also contains minerals such as calcium, magnesium, manganese, selenium, phosphorous, iron, protein, zinc and copper. The best part of the Konjac is, it contains zero cholesterol. 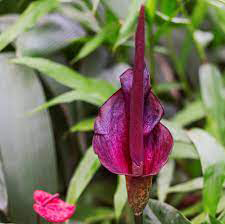 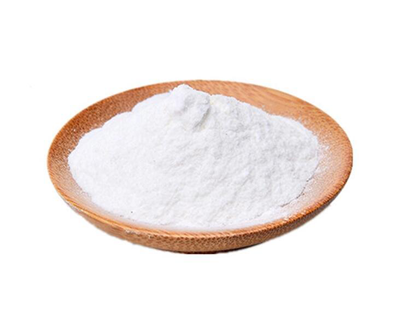 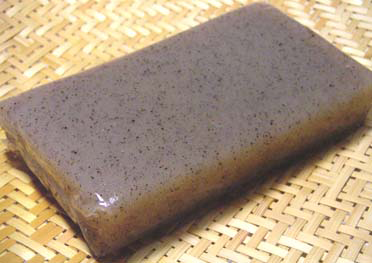 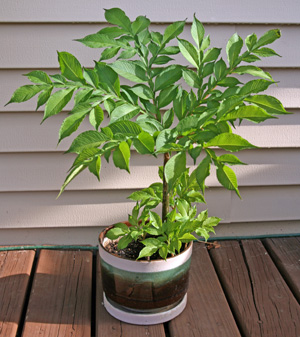 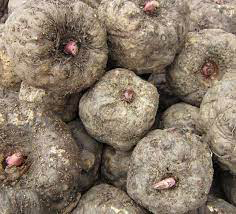 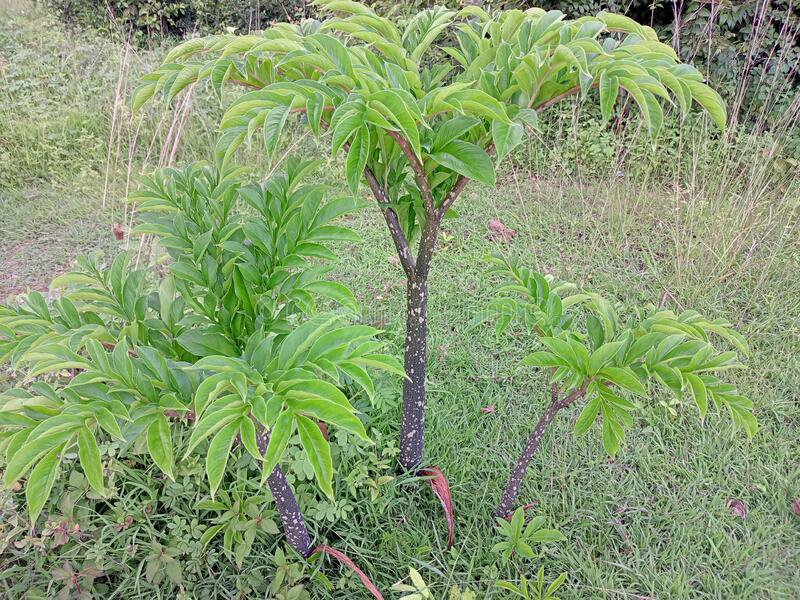 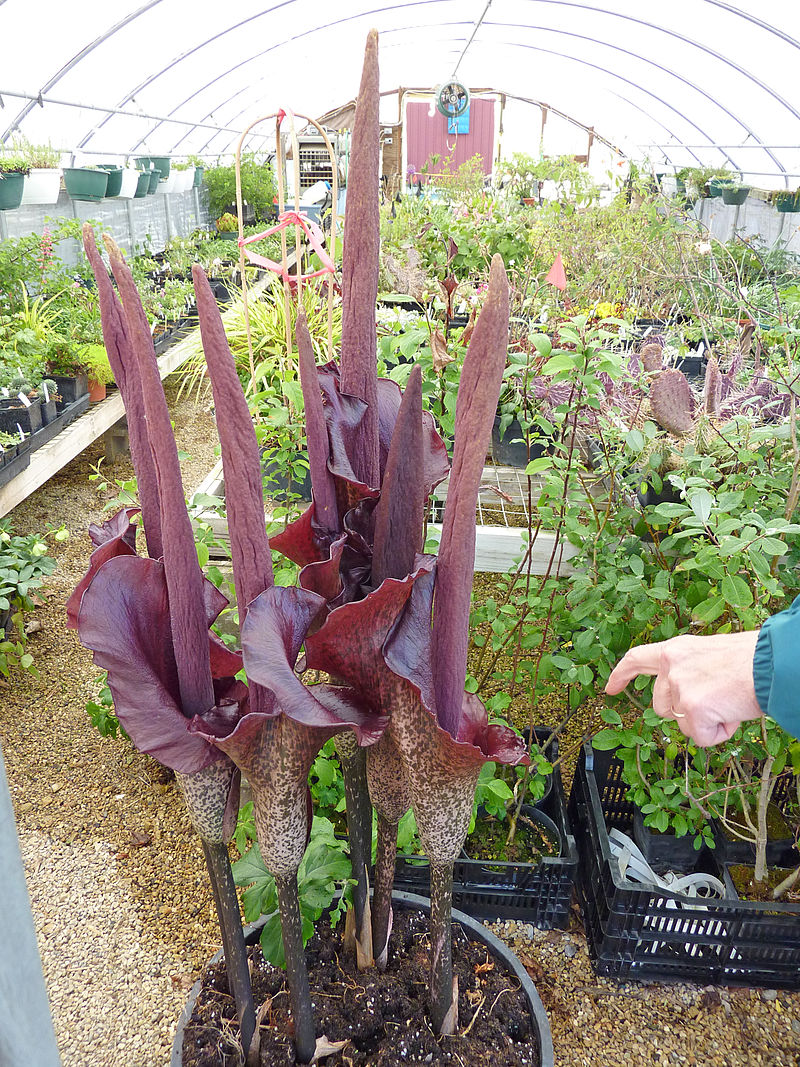 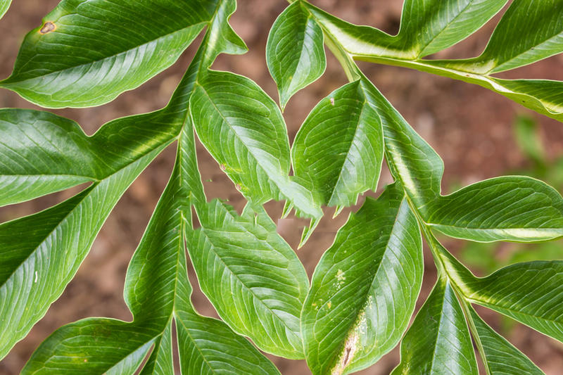 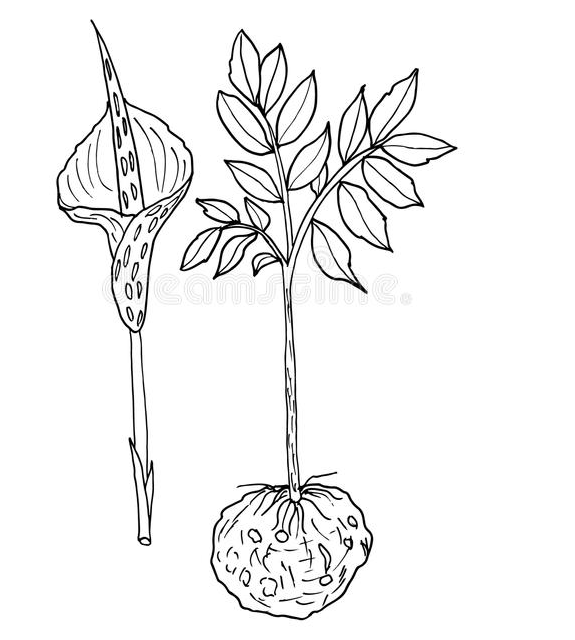 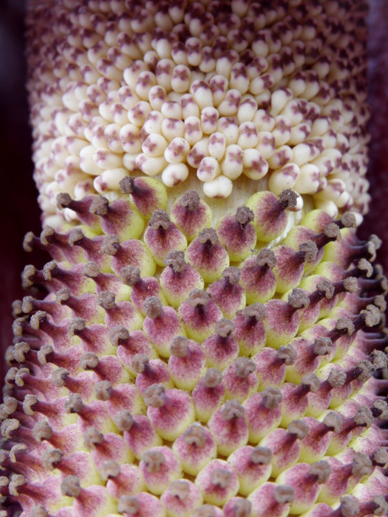 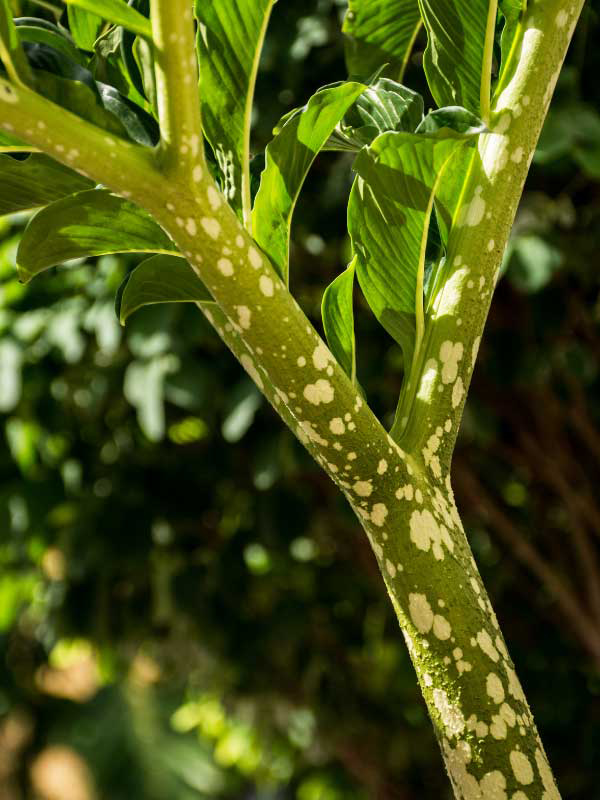 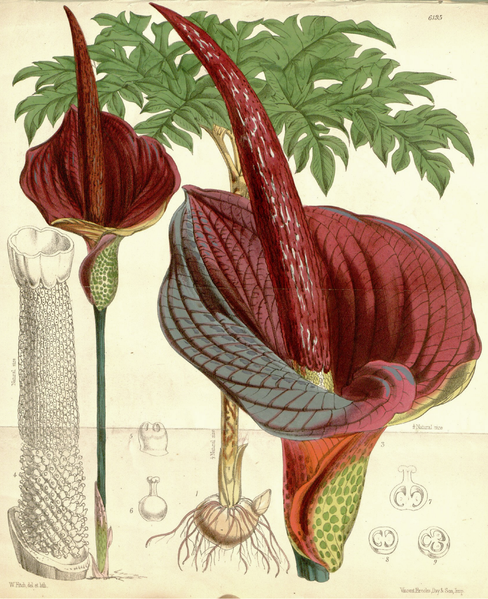 Konjac is proven to be beneficial for people who are looking forward to lose excess body weight. Fiber when consumed frequently keeps a person full for extended period of time reducing the snacking in between the meals.

Research has concluded that adding glucomannan fiber to a balanced diet helped the participants in reducing body weight. Glucomannan keeps a person full for a longer time period by slowing down the rate at which the digestive system empties. However, the research also found that konjac had no role in promoting weight loss. (3), (4), (5)

Konjac consists of anti-inflammatory and antimicrobial properties, which is very good for our skin and it also helps in healing wound in our skin. Apart from this konjac is highly rich in antioxidant, such as vitamin C, which protect our skin from free radical and prevent them to do any oxidative damage to our skin cells, it is the main cause for various types of skin related issues, such as wrinkles, dark spots, acne, signs of aging, etc.  (7), (8)

Konjac consists of good amount of calcium, magnesium and phosphorus, all these minerals are very important for our bone structure and health. Consumption of Konjac helps to improve the bone density and keep our bone stronger and healthy. It also helps in repairing and the growth of bone tissues. Apart from this Konjac is highly rich in Vitamin C, which is also very beneficial for our bone health. Vitamin C helps to encourage the absorption of calcium in our body and it also helps to prevent the oxidative damage to our bone tissue and prevent the macular degeneration of bone. Studies have been proven that consumption of calcium rich food, such as konjac can improve our bone health and reduce the risk of various types of bone issues, such as osteoporosis.

Glucomannan is a water-soluble fiber which can influence people who have a slow or unbalanced metabolism. By increasing blood flow and energy, the compound boosts metabolic rate. This, in combination with a healthy diet, promotes weight loss and improved digestion.

8. Reduce the Risk of Cancer

As we already discussed konjac is highly rich in vitamin C, it is a strong antioxidant, which fight against free radicals and prevent the oxidative damage to our healthy cells caused by free radicals, and these free radicals are the main cause of cancer.

Konjac root is high in mannose carbohydrates, which can hasten wound healing. Glucomannan also has a natural immune-boosting effect. A well-regulated and healthy immune system aids the body’s ability to fight bacteria and recover.

Konjac is water soluble and thus aids digestion. It is able to help strengthen your digestive system, making it a great natural remedy for those who have digestion problems. It can also aid with constipation and hemorrhoids.

Konjac consists of glucomannan; this is a great agent to help control sugar levels in the body, thus helping with the control and symptoms of diabetes.

Konjac root consists of anti-bacterial components that benefit both overall health and oral health. This can aid in the reduction or elimination of minor oral health issues such as inflammation, pain, and fight against harmful bacteria.

Because of the konjac plant’s anti-bacterial properties and antioxidants, it is supposed that you may gain an increased immunity. Body may be able to help fight common diseases such as cold and flu more effectively.

If you have blood pressure issues, you may want to try and include konjac root into your diet. The plant can help to stabilize blood pressure levels, which thus will help with your heart health.

Konjac is highly rich in vitamin C, which is very beneficial for our eye health. Vitamin C is a strong antioxidant, which is fighting against free radicals and prevents oxidative damage to our cells, thus prevent the macular degeneration of eye cells. Studies have been proven that consumption of konjac on a regular basis can reduce the risk of various eye issues, such as cataract.

PMS can be quite problematic for many women and girls, but the konjac plant can help by providing added vitamins and minerals to your diet. This can help to overcome some of the symptoms of PMS for women. The root plant is also a natural anti-inflammatory, which helps to reduce swelling and PMS pains during the phase.

Healthy diet is beneficial to the body, but improved mineral absorption can provide even greater benefits. Konjac root improves the body’s ability to absorb minerals naturally. As a result of improved absorption, a person can benefit more from the healthy foods and beverages they consume.

Konjac consists of great amounts of anti-inflammatory agents, which can help with bone and joint health. You might find a way to proper nourish your bones and a decrease in joint pain. This is particularly useful for those suffering from conditions such arthritis.

19. Reduces the Risk of Cardiovascular Diseases

Cardiovascular diseases affect human health. Also, heart health is essential to weight management. Research found that konjac glucomannan (KGM) helps fight cardiovascular problems. This study shows that KGM can help in short-term use. If you take 3 grams of KGM/day, it will reduce the LDL and non-HDL cholesterols by 7% to 10%. Hence health professionals found it to be beneficial in aiding cardiovascular diseases. 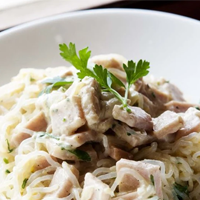 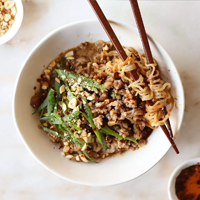 Other Side Effects of Konjac Root

Although there are numerous health benefits to consuming konjac root, there are some possible risks and hazards

The konjac root, as a jelly, contains a lot of water and does not dissolve completely when chewed. To avoid choking, it is best to chew more than usual when eating konjac jelly. It is good that small children break down the jelly before eating it.

Increased risks for those with blood sugar

Glucomannan has the potential to raise blood sugar levels. To avoid potential risks, those with high blood sugar or diabetes should seek medical advice before consuming konjac root.

Diarrhea may occur as a result of konjac root improving the digestive system and assisting with bowel movements.

If you have a weak stomach or are prone to frequent bowel movements, avoid taking konjac root.