Trending
You are at:Home»Vegetables»Lotus – Nelumbo nucifera 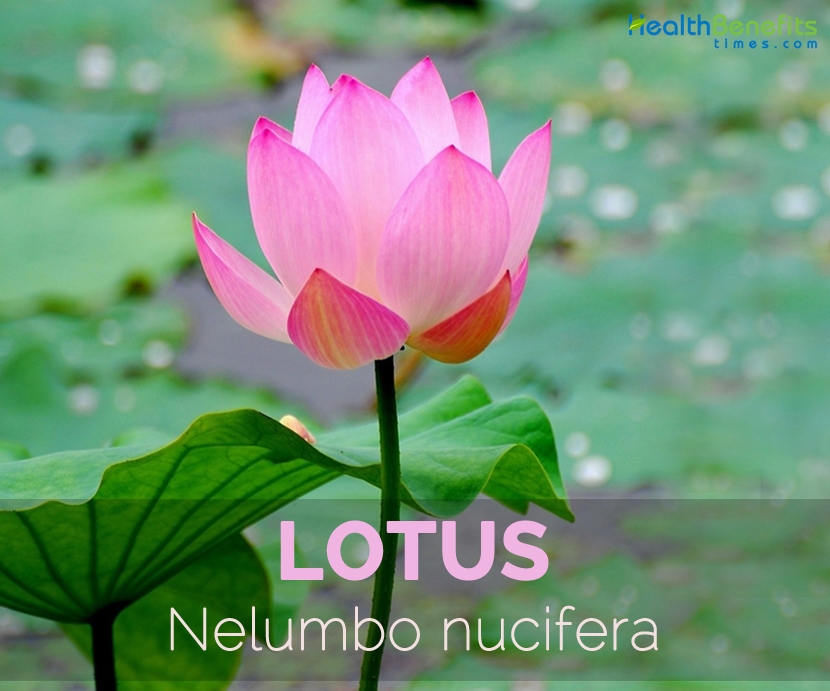 Nelumbo nucifera, under the more common names of the Hindu Lotus, Egyptian Bean, Lotus, Indian Lotus, Lotus Bean, Sacred Lotus, Oriental Lotus, Water Lotus, is a perennial flowering aquatic herb which are found on the fresh water. It has floating leaves and rooted plant, grows about 150 cm high. The plant rises from the rhizomes which are planted in the soil. It is many petaled flowers which grow in the range of white to rosy. These flowers rise above several centimeters on thick stems above the water.

It is the member of Nelumbonaceae family native to Tropical Asia and Queensland (Australia) which is widely cultivated in water gardens. Lotus lives over a thousand years. It grows in a warm-temperate to tropical climates. Some varieties of Lotus are: Asiatic, Chawan Basu, Chinese Double Rose, Momo Botan, Mrs. Perry D. Slocum, Perry’s Giant Sunburst, Rosea Plena and Sacred Pink.

In the 18th century, it has been introduced in Europe as a water lily but today it is found all over the world in modern botanical gardens. Lotus plants are typically cultivated in Japan, Australia, India, China and Iran.

The lotus flower is also regarded as a symbol of purity and beauty in both Buddhist and Hindu religions. It is illustrated in religious pictures and texts. During 1999, it was served in China as an industrial crop. Lotus was cultivated for more than 1000 years in Japan which was introduced from China.

Lotus is perennial, rhizomatous and aquatic herb which usually grows to the height of 150 cm and has a horizontal spread of 3 meters. The roots are long, slightly round from white to reddish and brown. The leaves are large which float on the surface of water. The leaves are water repellant, orbicular, concave-cupshaped with 60 cm as a diameter. The stems are thick which bears flowers several centimeters above the water. The flowers are hermaphrodite, oblong elliptic to obovate, about 10-25 cm diameter and are sweet scented. Petals are white to rosy and numerous. Flowers bloom in the morning and closes in the evening.  The fruits are like nuts, oblong-ovoid, brown, glabrous with the size of 1.0–2.0 × 7–1.5 cm. The fruit possess the black, hard and ovoid seeds.

Lotus seeds are sweet edible seeds of lotus flower ans is a good source of nutrients, vitamins and minerals. It is commonly known as makhana in India and is small, round and white or off-white in appearance. They are low in saturated fats, sodium and cholesterol; high in magnesium potassium, thiamine and phosphorus and are used in desserts, rice porridge, soups and stir fry dishes.

Click here for nutritional value and health benefits of Seeds.

All parts of the Lotus plant are edible and provides numerous health benefits. The lotus root is used to treat various health ailments and to add seasoning to the food. It is composed with several vitamins, minerals and nutrients. Due to the richness in Vitamin C, it benefits the body in various ways. The ample amount of potassium helps to reduce fatigue, heart problems, irritability and high blood pressure. Minerals such as iron assist in producing red blood cells.

The Lotus root promotes the blood circulation which helps to raise oxygenation of organs and also increase the functions and energy level. The presence of copper and iron in meaningful amount assist in the production of red blood cells, lowers the risk of anemia, increases the blood flow as well as vitality. (1)

The presence of pyridoxine interacts with the neural receptors in brain which impacts the mental state and mood. It eradicates headaches, irritability and stress level. The flowers of Lotus are associated with tranquility and peace. (2)

Lotus root contains potassium in significant amount which helps to maintain the balance the fluids and prevent the sodium effects in the bloodstream. Potassium acts as a vasodilator which helps to relax the blood vessels, lowers the rigidity and contraction, increase blood flow and lowers the stress on cardiovascular system. Potassium is vital for the neural activity and transport the blood and fluid to the brain. (3)

Lotus root is loaded with dietary fiber which adds bulk to the stool and ease bowel movements. This can lower the constipation, increase nutrient absorption through the digestive and gastric juice secretion, stimulates the peristaltic motion in the intestinal muscles and ease the bowel movements. (4)

Vitamin C is an antioxidant which is found in high amount. It is vital for the formation of collagen; maintain strength and integrity in the organs, vessels and skin. It enhances the immune functions. In addition, Vitamin C eradicates the free radicals from the body that leads to the health conditions like heart disease and cancer. (5)

Potassium is a vasodilator and dietary fiber has the cholesterol scrubbing ability. The lotus root contains the pyridoxine which helps to control the homocysteine level in the blood that are associated to heart attacks. (6)

Lotus root helps to manage the weight due to low calorie content and high amount of fiber and nutrients. It provides all the nutrients and make full for long periods of time which lowers the chances of overeating and also manage obesity. (7)

Lotus roots are an excellent source of Vitamin A which enhances the skin, eyes and hair health. The antioxidant activities prevent ocular conditions and macular degeneration, speeds up the healing process, reduces inflammation and skin ailments. (8)