Trending
You are at:Home»Herbs and Spices»Health benefits of Meadow Salsify 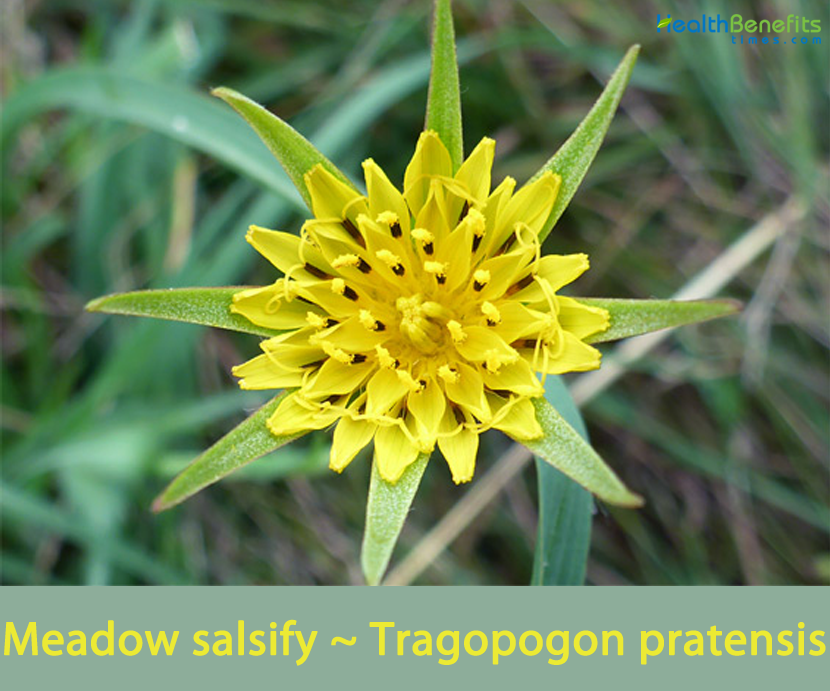 Tragopogon pratensis commonly known as meadow salsify or showy goat’s-beard is an annual plant belonging to Asteraceae Bercht. & J. Presl (Aster family). The plant is native across Europe, Central Asia, Turkey and North America. It is found in North America from southern Ontario to Massachusetts; most of England; on the eastern and southern edges of Scotland; and central Ireland but not the coastal edges. It has been introduced to widespread areas of Canada, Haiti, and the United States. Some of the popular common names of the plants are Goat’s-beard, Johnny-go-to-bed-at-noon, Meadow salsify, Shepherd’s-clock, Yellow goat’s-beard, Jack-go-to-bed-at-noon, Showy goatsbeard, Goatsbeard, Meadow goatsbeard, Goat’s beard, Johnny go to bed at noon, Shepherd’s clock, Meadow Salsafy, Noon Flower, Noonday Flower, Noon flower, Noontide and Star of Jerusalem.

Genus name Tragopogon is derived from two Greek words. Tragos means goat and pogon means beard. Beard refers to the fuzzy seed head that is produced after flowering. The species name pratensis means “of the meadows” and refers to its typical habitat. Meadow salsify opens its blossoms at daybreak and closes them before noon, except in cloudy weather, hence its old country name of ‘Noon-flower’ and ‘Jack-go-to-bed at-noon’.

Meadow salsify is an annual to short lived herbaceous biennial or perennial plant that normally grows about 20–60 cm (9–24in) high and rarely 1m (39 in) from a perennial tap-root. The plant is found growing in weedy meadows, pastures, dunes, waysides, waste places, roadsides, disturbed sites, fields, mesic black soil prairies, woodlands, railroads, vacant lots, miscellaneous waste areas, road verges and field margins. The plant performs best in full sun, sandy, loamy, or clay soils and tolerates strong winds. It is intolerant to shade. Root is straight, conical in shape, which extends into the soil up to 30 cm deep; its diameter is up to 4 cm. The rhizomes are fleshy and edible. The root and buds are edible, and it has milky latex.

The stems are erect and usually branched near the top. They are often covered with a whitish, waxy bloom (glaucous). They usually have patches of white, woolly or cobwebby hairs when young and are hairless or almost hairless at maturity. The stems and leaves exude a milky sap when broken.

Basal leaves are grass-like, linear, up to 12 inches long, and stalk less. They are rounded and wide at the base, up to ¾ inches wide, then abruptly narrowed and tapered evenly to the tip. They are occasionally strongly curved backward, often coiled, toward the tip. The upper and lower surfaces are usually glaucous. They are hairy with woolly or cobwebby hairs when young, and hairless or almost hairless at maturity. The margins are untoothed. Basal leaves are sometimes withered by flowering time.

Stem leaves are alternate. They surround the stem (clasp) at the base and are otherwise similar to basal leaves. They become progressively smaller as they ascend the stem.

Each flower head is about 2 inches across when fully open, consisting of numerous yellow ray florets and about 8 green floral bracts that are lanceolate-linear in shape. The ray florets spread outward from the center of the flower head. The outer florets are noticeably longer than the inner florets. Each floret has a truncated tip with 5 small teeth. At its base, there is a columnar reproductive structure consisting of a yellow divided style and black anthers that are appressed together around the middle of the style. The floral bracts extend to about the outer margin of the flower head; sometimes, they are a little shorter or longer than the width of the flower head. The flower heads open up during the morning and close again by the afternoon. The blooming period occurs from late spring to mid-summer and lasts about 1–1½ months.

Each floret is replaced by an oblong seeds or achenes that have a long thread-like beak. They are 1 to 1.5 inches long and are attached to a fluffy tannish-white pappus with feathery bristles. These hairs are slightly plumose because they contain small hair-like branches. They are usually white at the base, but become dull brown toward their tips. Collectively, these achenes with their tufts of hair form a large spheroid ball that spans about 3–3½ inches across. Distribution of the achene is provided by the wind, and the plant reseeds itself. 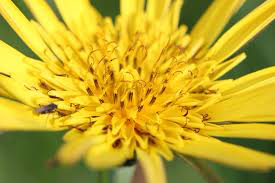 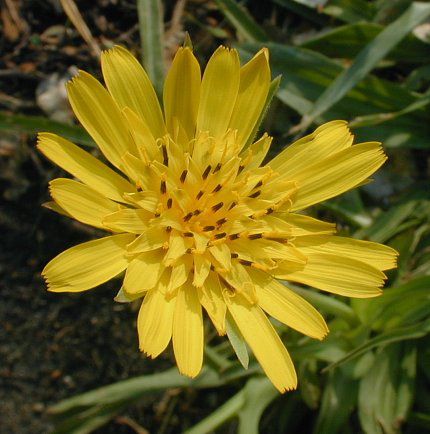 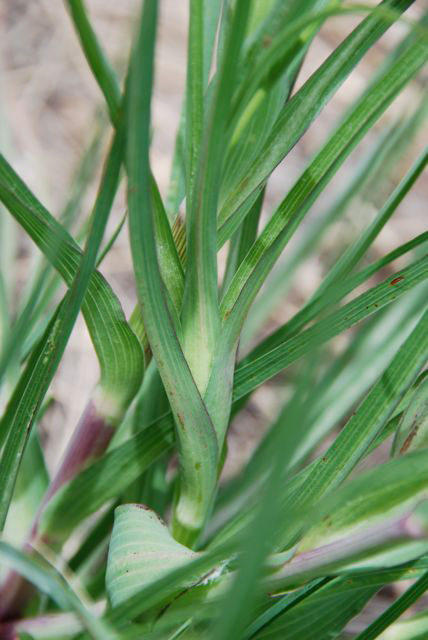 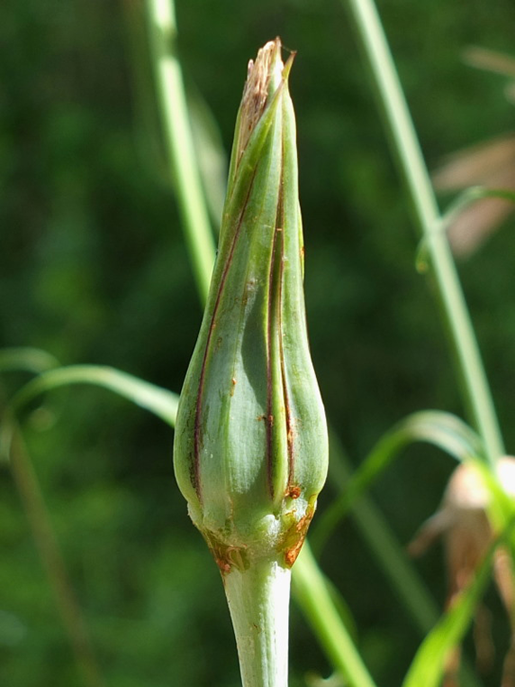 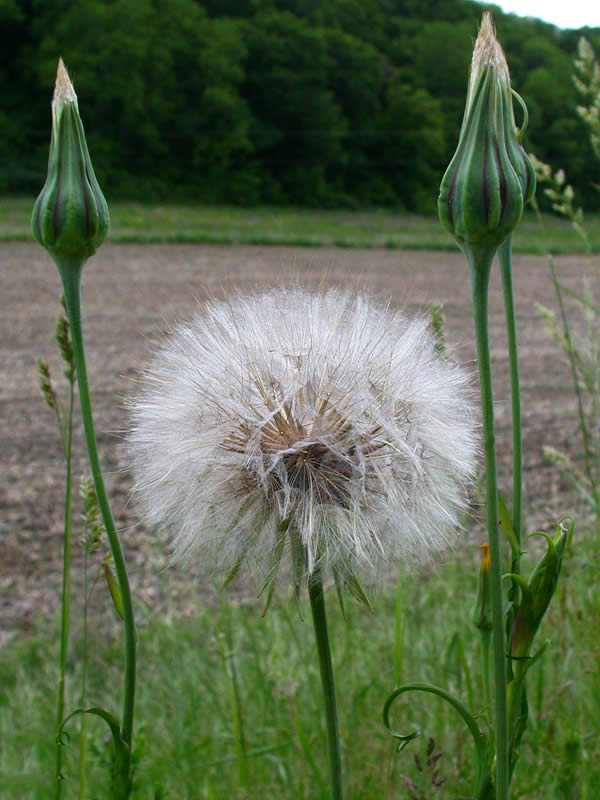 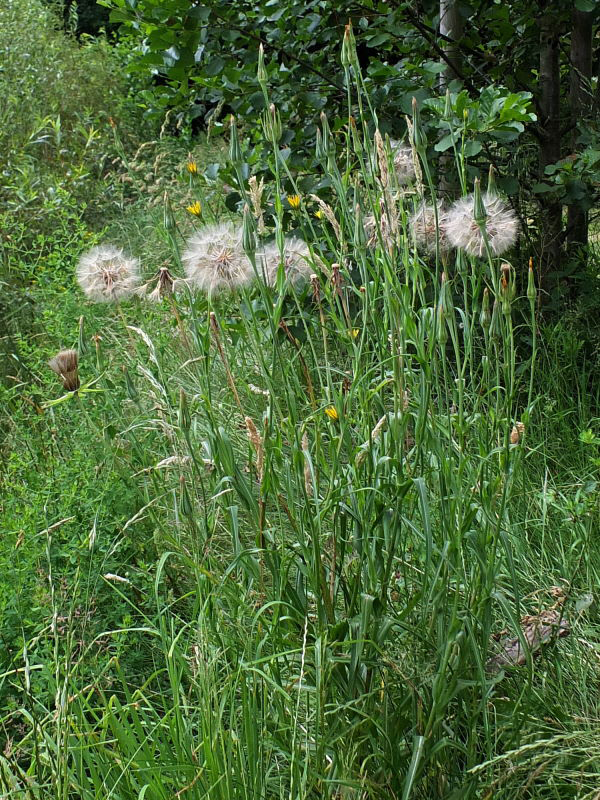 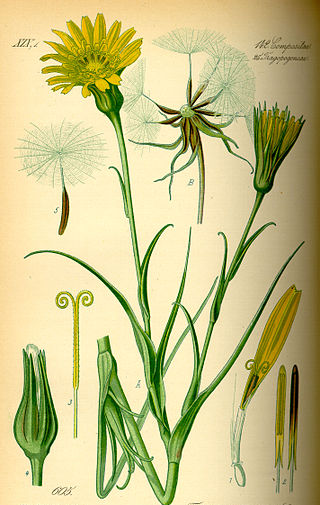 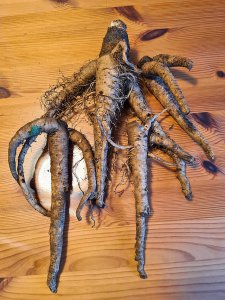 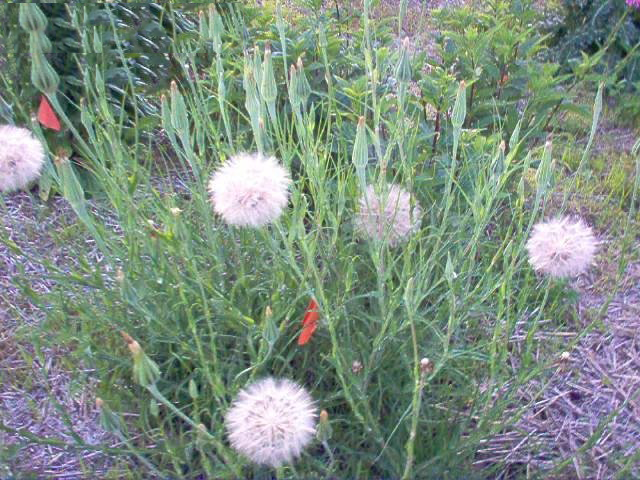 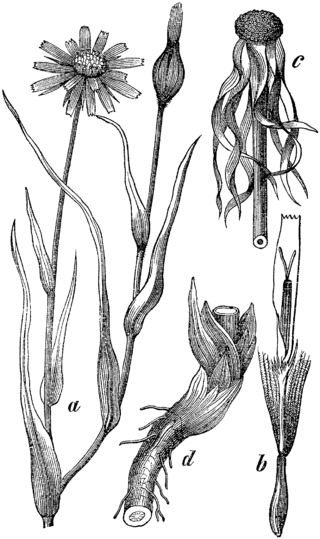 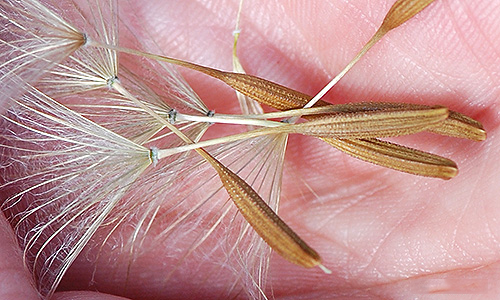 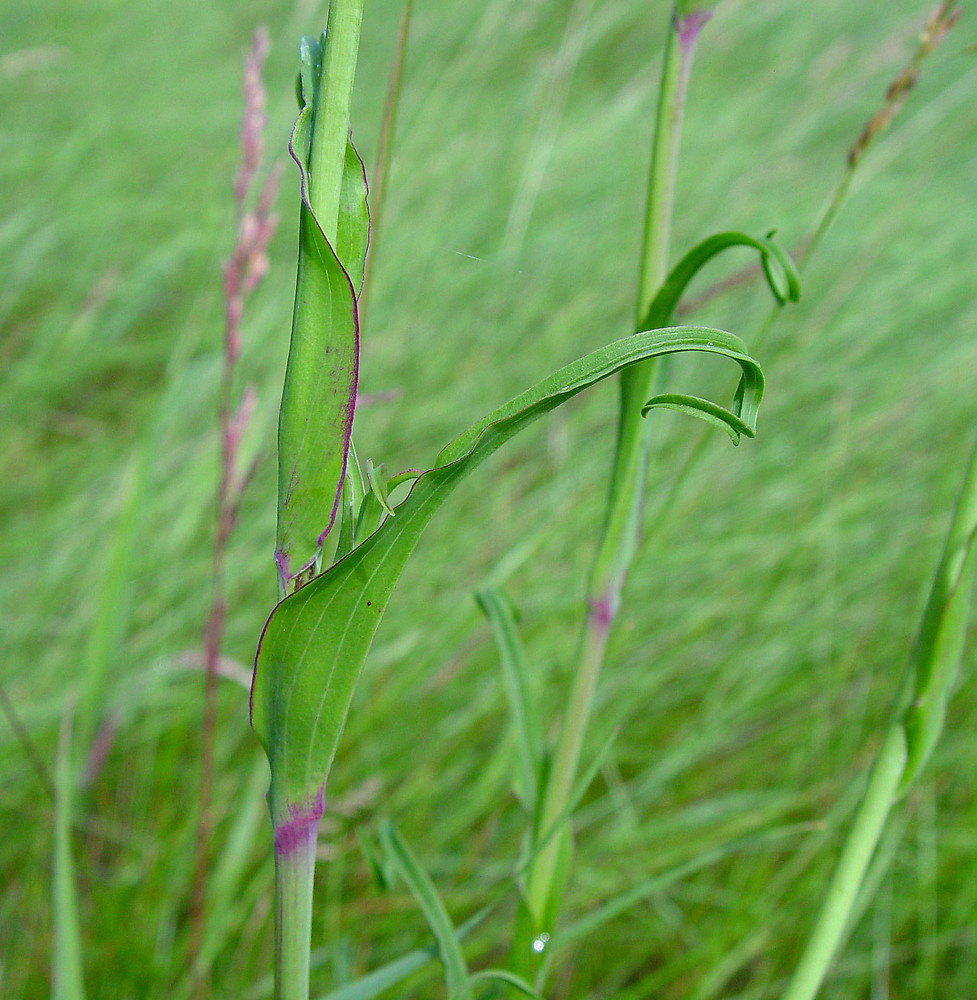 Tender shoots of the plant, in addition to being rich in gallic acid, contain rutin, a flavonoid that improves circulation and prevents capillary fragility, being indicated against hypertension and heart diseases. Research has concluded that the presence of certain doses of resveratrol, the same cardio-protective component found in grapes.

Meadow salsify (roots and shoots of the plant) is very rich in Gallic acid, which has astringent and anti-bronchial properties. Syrup made from the root has been reported to be of great relief in cases of cough and bronchitis.

As previously mentioned it is rich in Gallic acid, with astringent properties, it protects the stomach from acid damage.

Due to its inulin content, the root is suggested for diabetics. It is a type of fiber that regulates the absorption of sugars in the diet and at the same time helps to lower cholesterol levels in the blood. It is made up of fructose units, which do not increase blood sugar levels. It also improves intestinal health by acting as a prebiotic, helping to protect against certain types of cancer such as colon cancer.

The intense green color of the plant, and the yellow of the petals, indicate a great wealth in beta-carotene and antioxidant flavonoids, which help improve the health of the body in general. It also provides caffeic, synapic and ferulic acid, antioxidants that protect from the harmful effect of nitrosamines, carcinogenic compounds that are formed in the body from tobacco smoke, some foods (like powdered milk), or food additives with nitrites.

Meadow salsify is a source of phenolic compounds capable of protecting against some diseases such as cancer. One of its components is gallic acid, which promotes apoptosis or natural cell death, preventing the survival of tumor cells. Scientific studies have investigated this component against lung cancer and stomach cancer.

7. Good for the liver

Young shoots are considered a very healthy food for the liver. It consists of bitter principles that increase digestive secretions, resulting in an increase in appetite and improved digestion. All this indicates this plant in cases of loss of appetite (anorexia), lack of appetite, heavy or slow digestion, or a feeling of swollen belly after meals.

Due to its fiber content, it prevents constipation. It is a purifying spring vegetable because of its fiber content and cholagogue and choleretic properties, which encourage the production and release of bile from the body, helping to reduce cholesterol.