Trending
You are at:Home»Fruits»Uses and Benefits of Mouse Ear Hawkweed 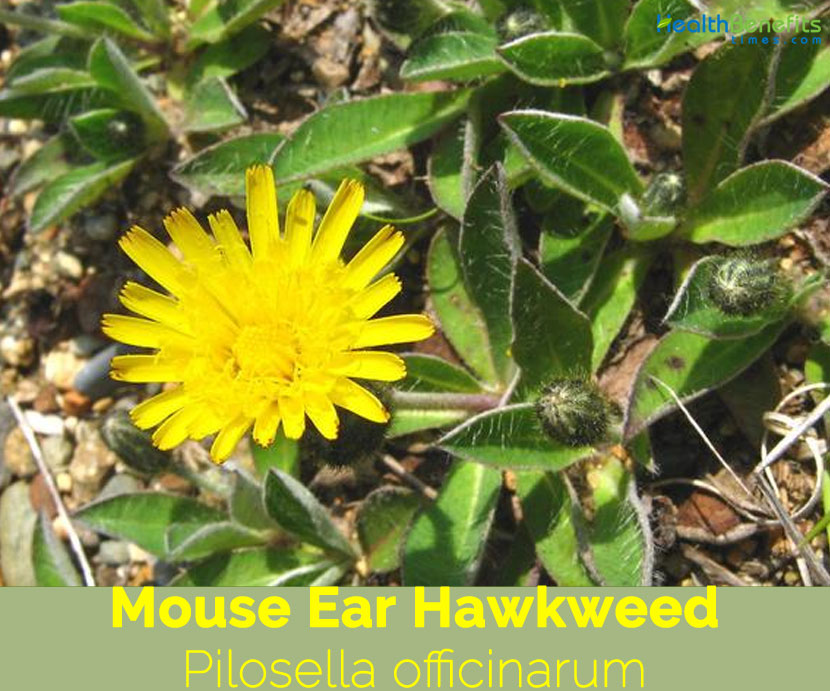 The entire plant, barring the flowering parts, is swathed with glandular bristles, which are generally white, but occasionally reddish when growing on the stems. Like most hawkweed species, it is highly variable and is a member of a species complex of several dozens of subspecies and hundreds of varieties and forms. It is an allelopathic plant. None of the Hawkweeds are now much used in herbal treatment, though in many parts of Europe they were previously used as a continuous medicine in diseases of the lungs, asthma and incipient consumption, but the small Mouse-ear Hawkweed, known commonly as Mouse-ear is still collected and used by herbalists for its medicinal properties.

Mouse ear hawkweed is a prostrate, sprawling, hispid, monocarpic perennial herbaceous plant that normally grows between 15-30 cm tall and stolons can be 10-25 cm long. The plant is found growing in upland pastures, meadows, heaths, banks, on walls, sheep-grazed grasslands, along roadsides, sparse bushes, in sunny pine and oak forests, gravel and clay pits, quarries, on fallow fields, tussock grasslands, lawns, wasteland, river terraces, rock outcrops, agricultural areas, dry prairies, railroads, and other disturbed sites. It grows well on sandy and similarly less fertile ground types, mostly in disturbed or waste areas. Mouse-ear is a creeping herb that usually grows like a carpet on crawling runners, every one of which takes the form of a basal rosette of oval-shaped leaves. The root system is comprised of fibrous roots and stolons. The stolons can generate a new rosette at their extremity; each rosette has the possibility of developing into a new clone forming dense mats in open space. Stems are erect, leafless, and unbranched, and sticky-hairy or somewhat wooly-hairy, mainly near the base.

Leaves are all basal except for the occasional scale-like leaf along the flowering stem. Basal leaves are 1 to 4 inches long, 1/3 to ¾ inch wide, generally elliptic, widest at or above the middle, blunt or pointed at the tip, tapering to wedge-shaped at the base, and toothless. The upper surface is sparsely to moderately cover in spreading hairs 1/8 to ¼+ inch long, the lower surface is white from a dense covering of shorter, star-shaped hairs mixed with long, spreading hairs. Flower stalks are long, leafless, and covered in stiff dark hairs. Leaves of the stolons are small and narrowly elliptic. 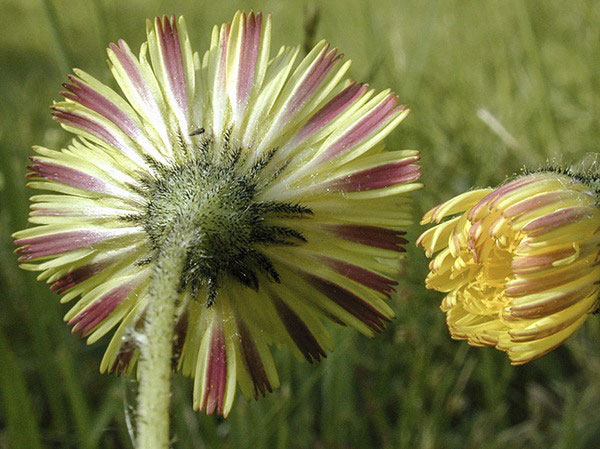 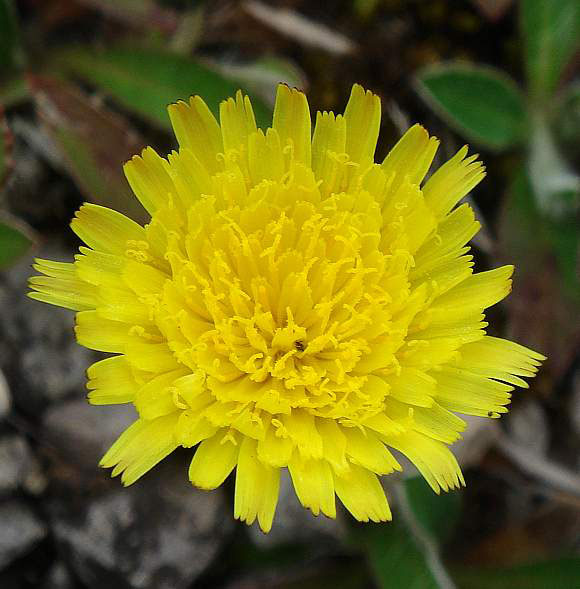 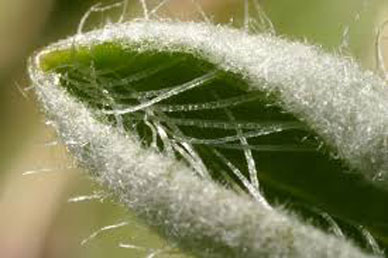 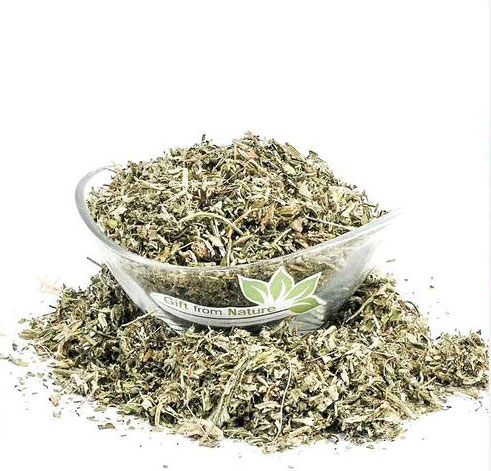 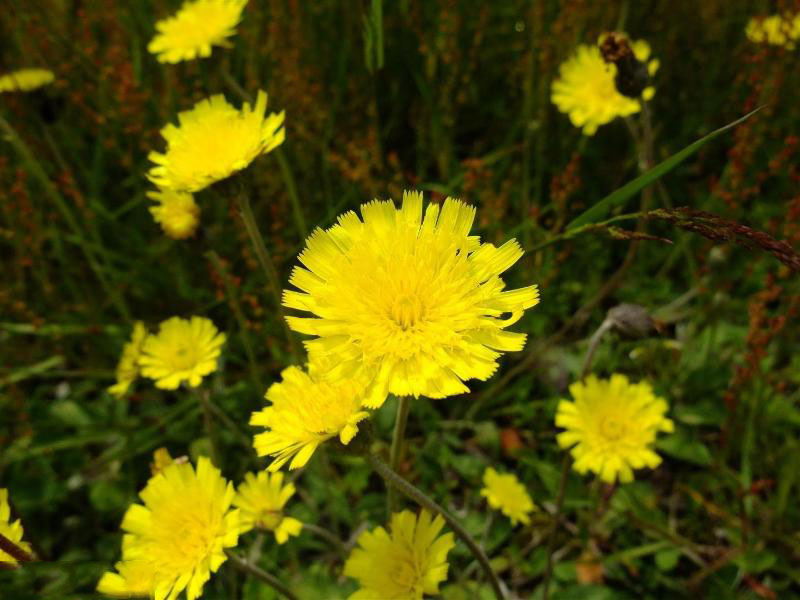 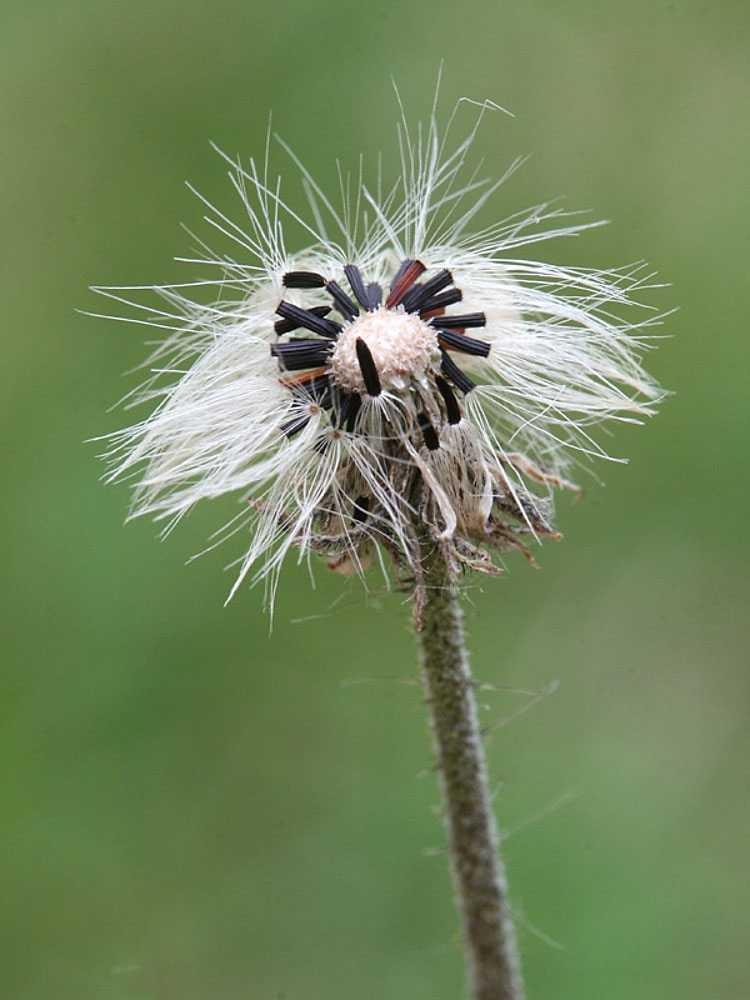 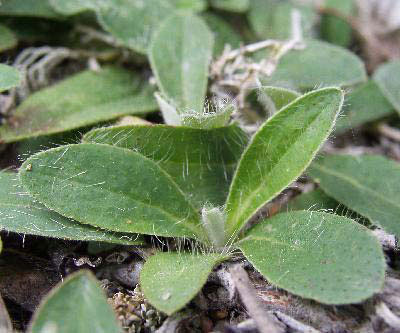 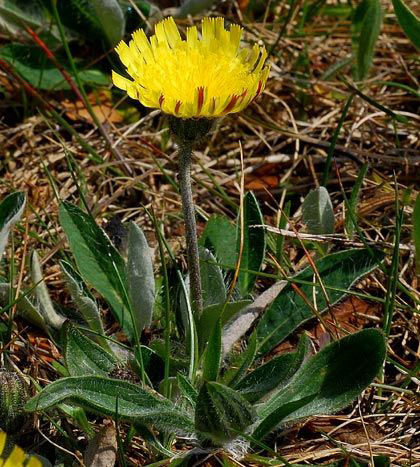 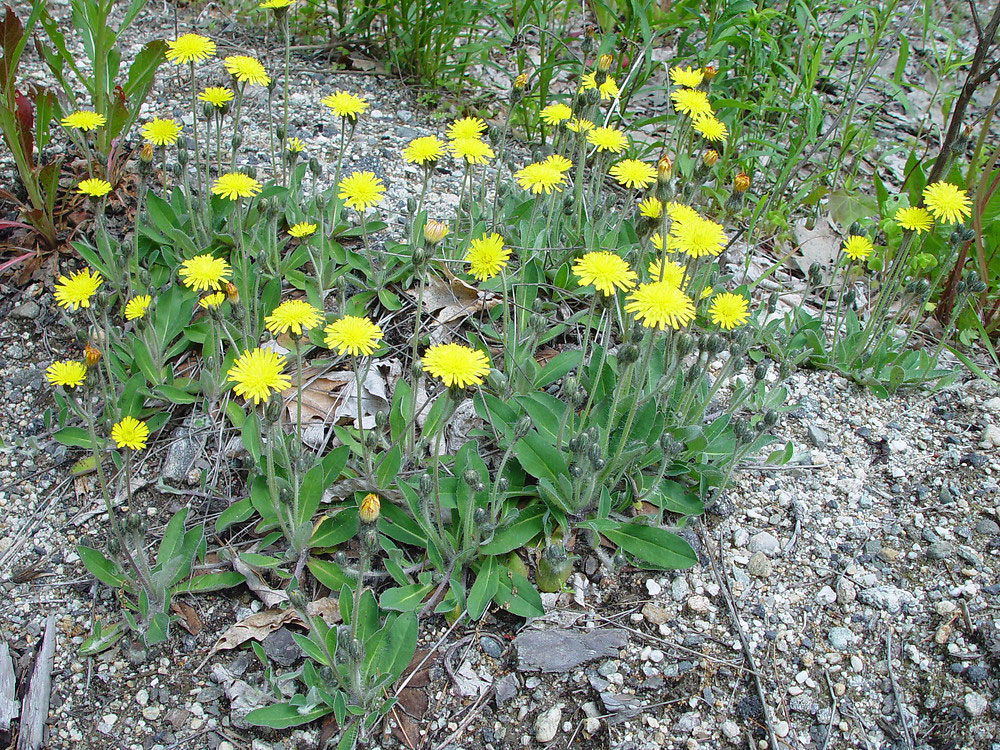 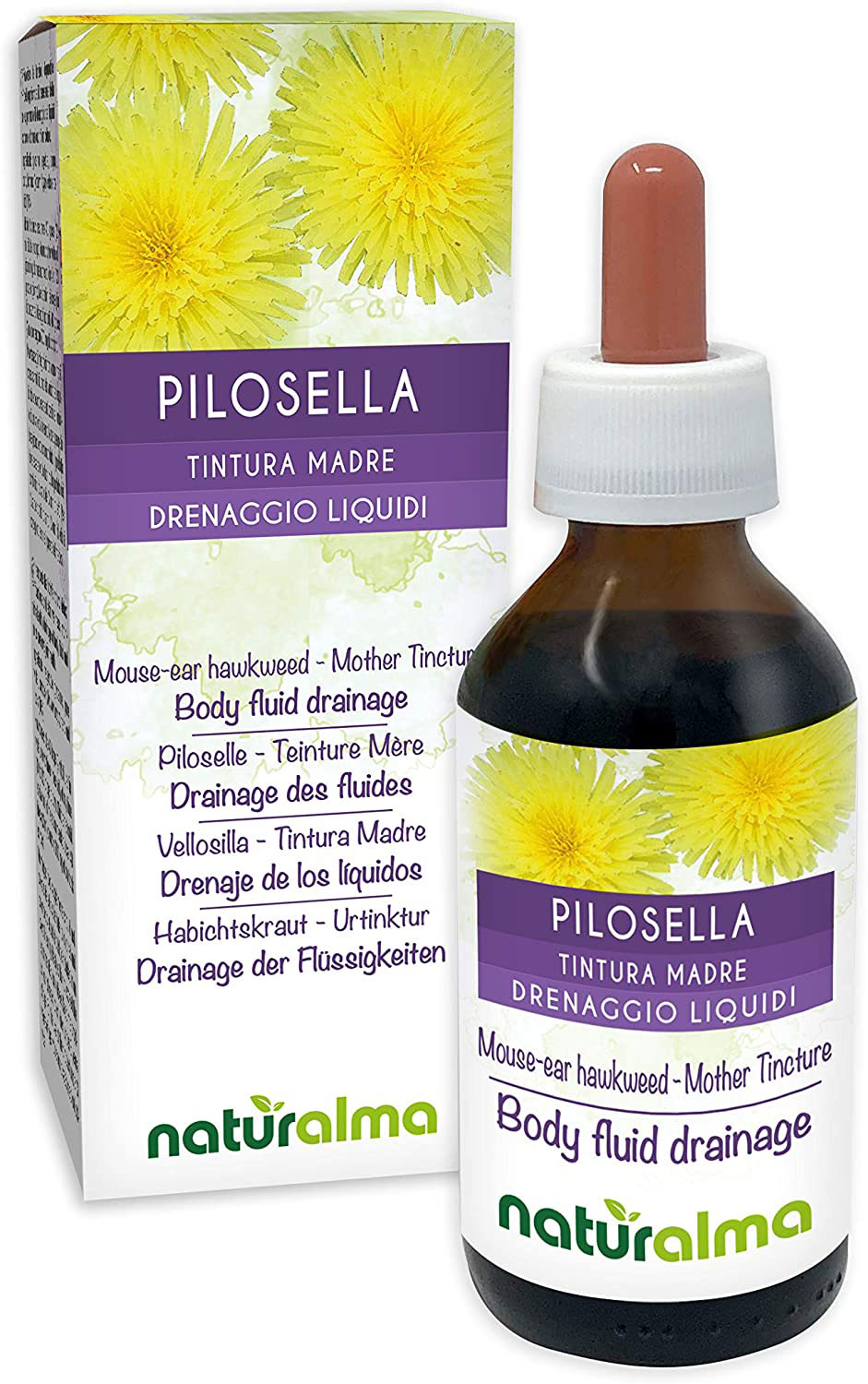 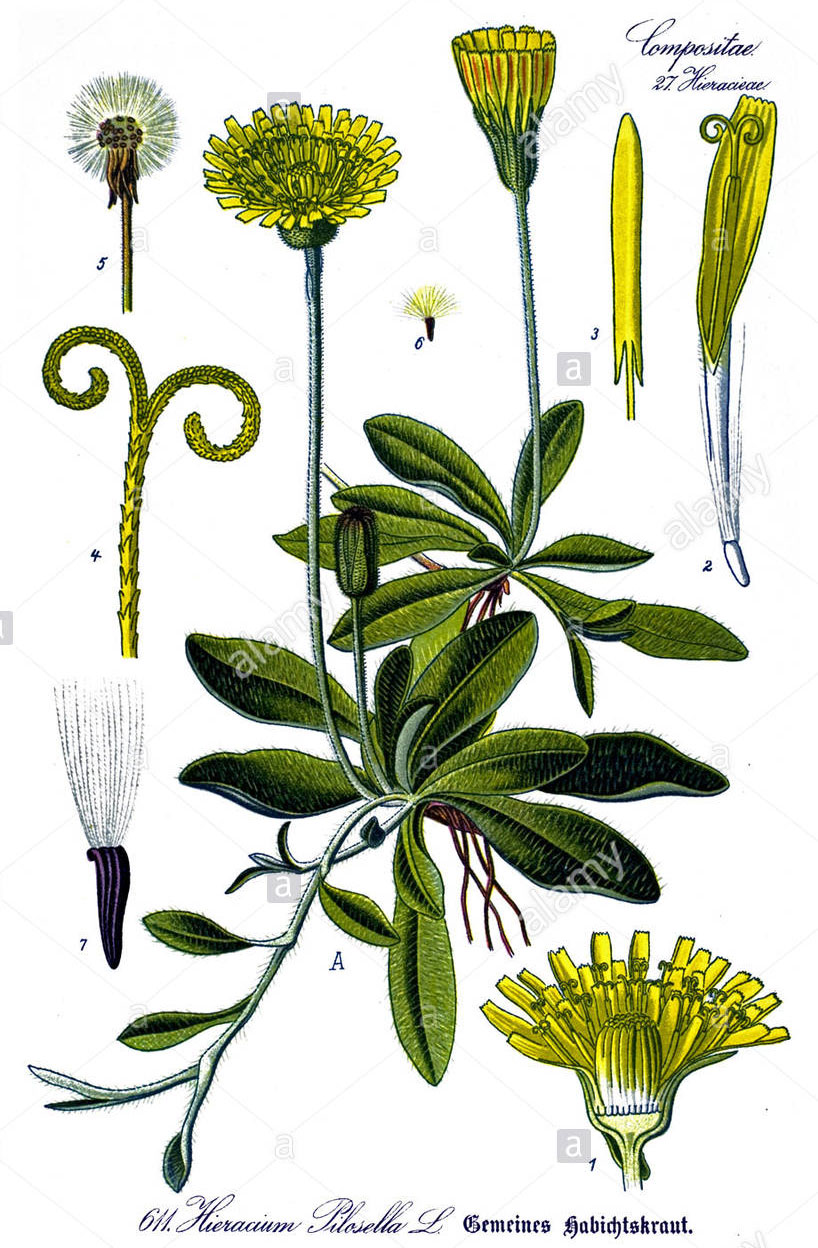 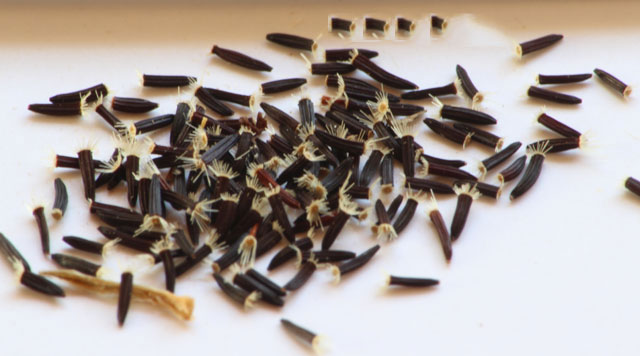 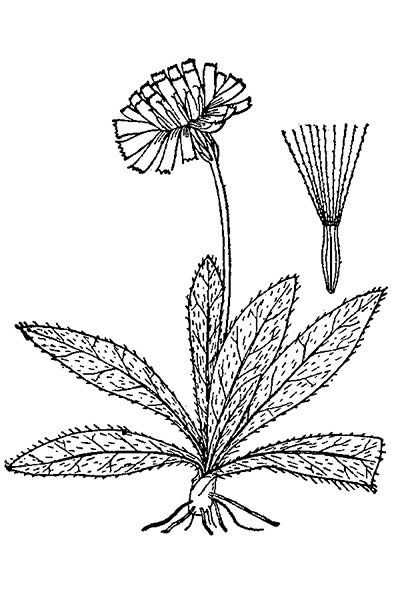 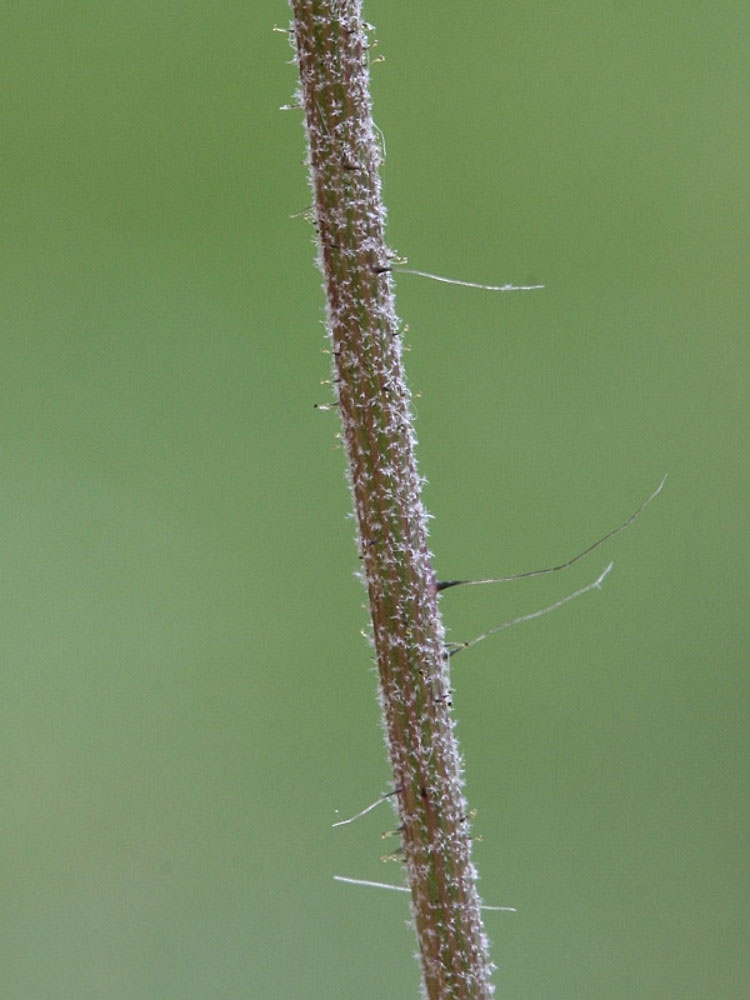 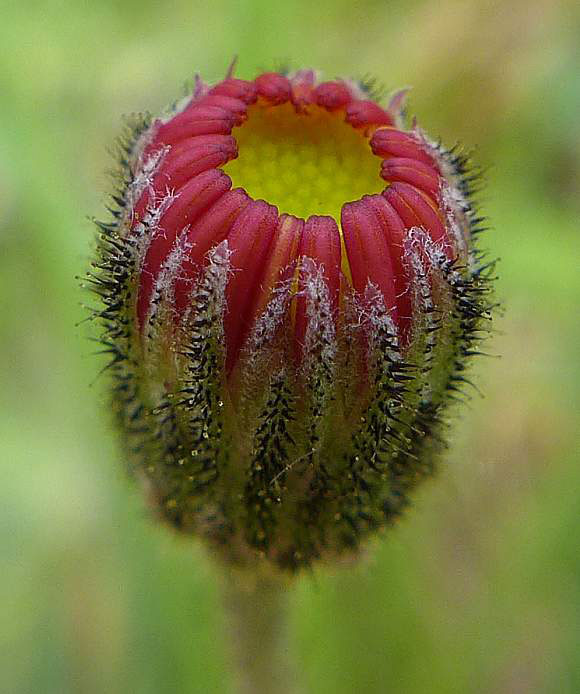 The flowering stem (scape) sprouts from the center of the basal rosette. It is usually much taller than the leaves. The plant normally consists of a single flower, occasionally 2 or 3, at the tip of a hairy, leafless stem. Flowers are yellow, dandelion-like, ¾ to 1 inch across with up to 120 petals (ray flowers), the outer rays often with a red stripe on the back side.

Fertile flowers are followed by achenes with slender bristles about 1.5-2 mm long, narrowed at the base, and with a tawny pappus. Fruits can be found purple to black with off white hairs that are 0.2 in. (5 mm) long. The fruit are usually dispersed by the wind.

Medicinally, mouse-ear is used in the form of an infusion as well as a tincture.

Infusion: To prepare the infusion from mouse-ear add one to two teaspoonful of the dehydrated herb in a cup (250 ml) of boiling water and allow it to permeate for about 10 to 15 minutes. For optimum results, this infusion ought to be drunk three times daily.

Tincture: The tincture prepared from mouse-ear ought to be taken in dosage of 1 ml to 4 ml three times every day.

Mouse-ear is generally gathered between the period of May and June when the plants are in flowering season.

Due to the variable regulations around (de)registration of pesticides, your national list of registered pesticides or relevant authority should be consulted to control which products are legally allowed for use in your country when considering chemical control. Pesticides should always be used in a lawful manner, consistent with the product’s label.

The main method of control at present is to improve pasture land by application of fertilizer and over sowing with pasture species. However, species of Hieracium/Pilosella remain a problem on areas of limited potential economic development, abandoned land, reserves and national parks. Timely over sowing and top dressing combined with intensive grazing show promise for control. Makepeace et al. discovered that of all the plant species investigated, clover is the best competitor. Where perennial grasses, legumes, and other beneficial forbs are present in the plant community, fertilizers can help control Hieracium/Pilosella species by increasing the competitive ability of more desirable species.

Due to its low, mat-forming growth, mowing is not effective. Mechanical control is ineffective since small fragments of plants can root and form new populations. In addition, plants or plant parts can be accidentally transported by machinery and establish elsewhere.

Species of Hieracium/Pilosella have proved resistant to most herbicides, so that chemical control of the weed does not appear practical. P. officinarum can be controlled with 2, 4-D amine or ester, and a mecoprop + MCPA + dicamba formulation, although results have been variable. This variability in effectiveness was thought to be related to the time of application. The 2, 4-D ester usually yielded better results than the amine formulation. However, total kill is unlikely and follow up with fertilizer and top dressing is considered essential. A problem with chemical control is that the chemicals have as much, or more, impact on many desirable pasture species than they do on P. officinarum. In many areas in New Zealand chemical control is uneconomic and thus not considered on a large scale.

Since chemical and mechanical control methods are ineffective and/or not economical, a program to develop biological control with insects and a pathogen was initiated in 1992. P. officinarum is not attacked to any noticeable degree by phytophagous insects in New Zealand, therefore presenting a competitive advantage over native rangeland species. The rust fungus Puccinia hieracii var. piloselloidarum was chosen as a potential biological control agent. However, during the investigations prior to its introduction, it was detected in the field in New Zealand but further strains may need to be tested and released to infect the various biotypes of P. officinarum. In addition to this rust fungus, five herbivorous insects of European origin, Oxyptilus pilosellae (Lepidoptera, Pterophoridae), Aulacidea subterminalis (Hymenoptera, Cynipidae), Macrolabis pilosellae (Diptera, Cecidomyiidae) Cheilosia Urbana (Diptera, Syrphidae) and Cheilosia psilophthalma (Hymenoptera, Syrphidae) were studied and are approved for release in New Zealand. The insects attack different parts of the plant and are at least genus-specific.

All risks which predispose short-tussock grasslands to P. officinarum invasion should be minimized. Instead, emphasis should be placed on sound land management including adequate fertilizing, avoidance of heavy grazing and burning, rabbit control, sowing of competitive pasture species, controlled grazing in the absence of P. officinarum flower heads and the use of classical biological control agents which stress or even kill P. officinarum.