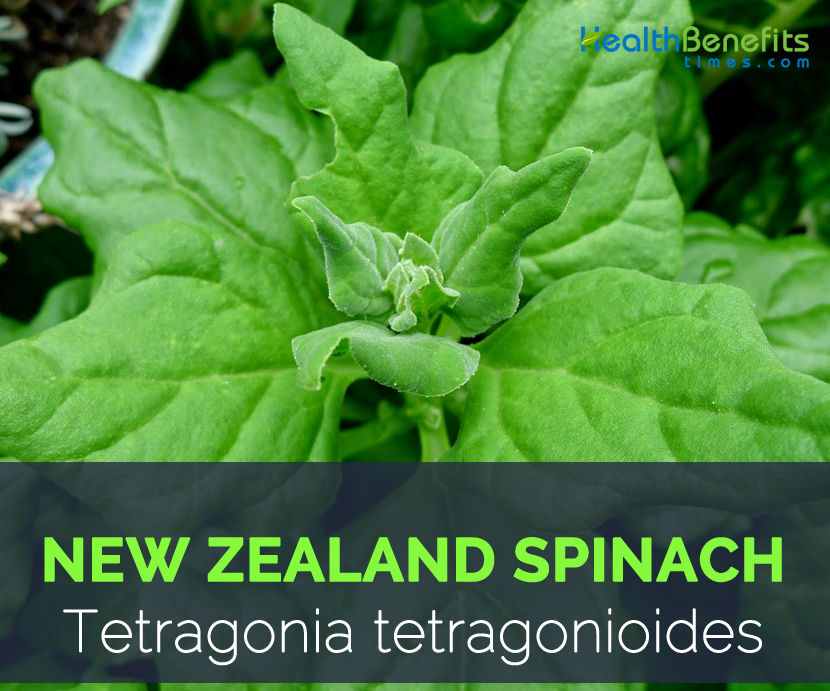 Tetragonia tetragonioides also known as New Zealand spinach, Tetragonia, ice plant, ever bearing spinach, everlasting spinach, perpetual spinach, Della Nuova Zelanda, Botany Bay spinach, Cook’s cabbage, kōkihi, New Zealand spinach, sea spinach, and tetragon belongs to Aizoaceae family. It is a perennial vegetable grown as a tender annual and is native to Argentina, Australia, Chile, Japan, and New Zealand. Stem and leaves are the edible parts of the New Zealand Spinach. It is mainly grown for the edible leaves, and is used as food or an ornamental plant for ground cover. As few of its names imply, it has got similar flavor and texture properties to spinach, and is cooked like spinach. Like spinach, it comprises oxalates; its medium to low levels of oxalates should be removed by blanching the leaves in hot water for one minute, then rinsing in cold water before cooking.

New Zealand spinach is an annual, low-growing, weak-stemmed leafy plant sized 1 to 2 feet tall and spread 1 to 3 feet broad. It is a heat-resistant, warm weather plant that is frost sensitive and prefers well-drained, sandy soils, rich in organic matter. It has a shallow root system. The plant has a sprawling habit, and will form a thick carpet on the ground or climb though other vegetation and hang downwards. It has 2-4 inches (5-10 cm) long, succulent, triangular- to oval-shaped leaves, smaller and fuzzier than regular spinach. The flowers of the plant are small yellow, and the fruit is a small, hard conical capsules covered with small horns. Within the capsule there are several seeds. The plant is a halophyte and grows well in saline ground. ‘Maori’ is the most common variety of New Zealand Spinach.

New Zealand spinach is a perennial vegetable grown as a tender annual. It is a low-growing, weak-stemmed leafy plant that can spread several feet wide. It has 2-4 inches (5-10 cm) long, succulent, triangular- to oval-shaped leaves, smaller and fuzzier than regular spinach. The leaves are thick, and covered with tiny papillae that look like water drops on the top and bottom of the leaves. They are normally pale to dark green colored leaves and have flavor and taste similar to other spinaches. Like spinach, it contains oxalates; its medium to low levels of oxalates need to be removed by blanching the leaves in hot water for one minute, then washing in cold water just before cooking. Due to its wonderful taste it is found used in several food items throughout the world since ancient times.

As the name implies it is native of New Zealand and was transported to Europe by Captain Cook in the late 18th century. Spinach most likely originated in Persia before being introduced to ancient India and China. In the early 7th century spinach made its way to Sicily and the Mediterranean region and moved into England and France in the 14th century. Now it is cultivated throughout the world due to its delightful taste and its nutritive values. 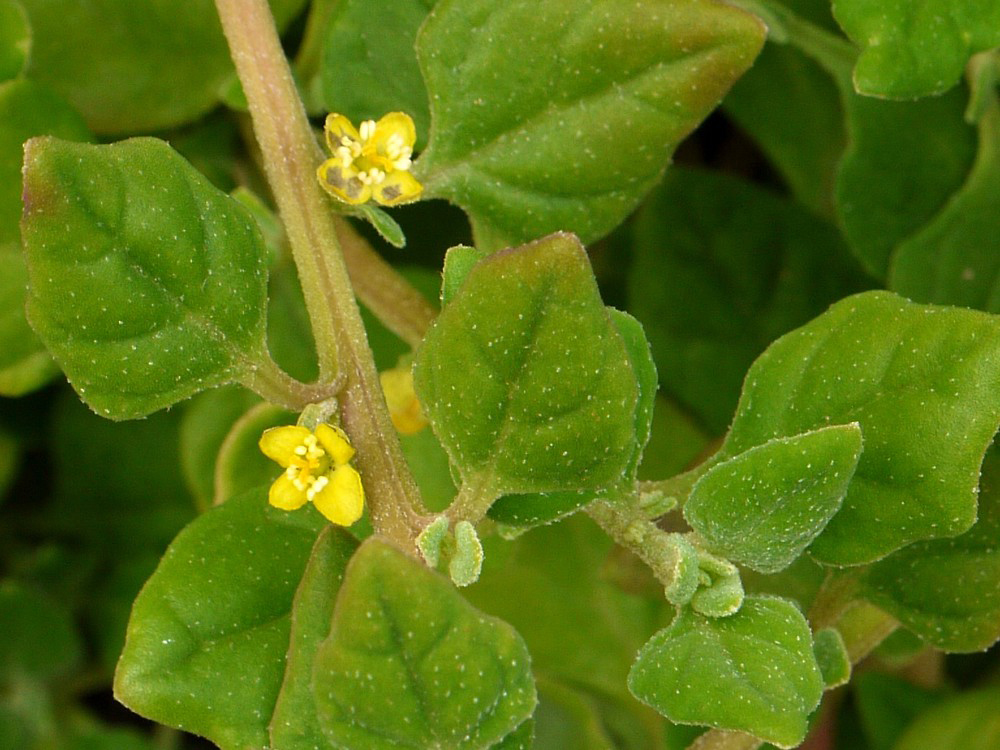 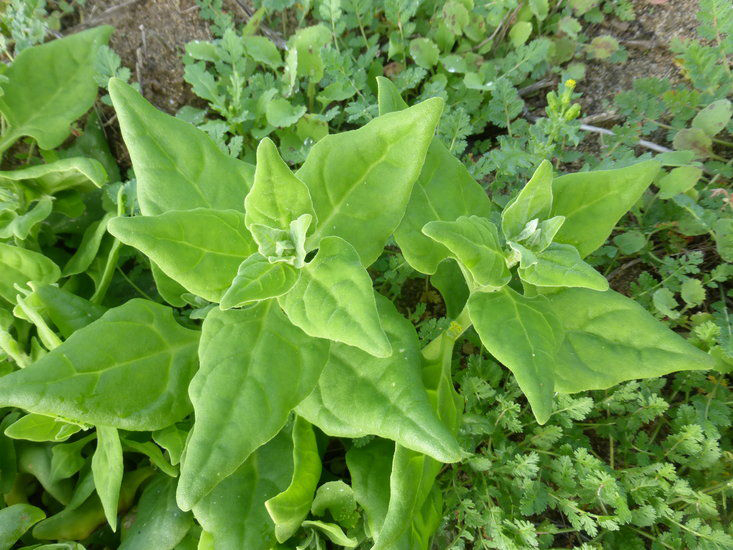 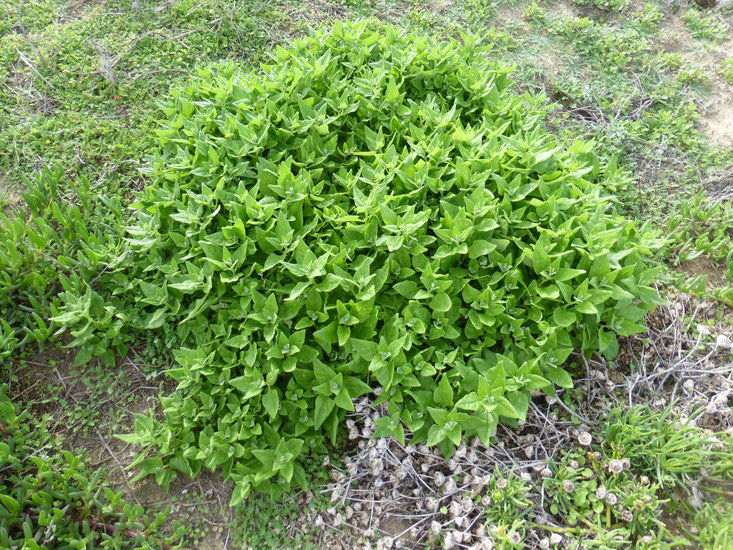 New Zealand Spinach or tetragon is a leaf vegetable, grown for its edible leaves and can be used as food or an ornamental plant for ground cover. It is an extremely healthy green leafy vegetable that has succulent, triangular- to oval-shaped leaves that are pale to dark green colored. The health benefits of New Zealand Spinach include its ability to prevents Asthma, thickens hair, protects the nervous system, blood clotting, fatigue, immunity, fights off colds and flu, reduce symptoms of rheumatoid arthritis ,alleviating PMS syndrome and Supports Heart Health.

Vitamin K found in New Zealand Spinach has been displayed to help prevent calcification of arteries, one of the main causes of heart attacks. It works by transporting calcium out of the arteries and not allowing it to form into hard, dangerous plaque deposits.

Vitamin K prevents hardening of the arteries because it can keep calcium out of your artery linings and other body tissues, where it can cause damage. This is especially true for vitamin K2, which is the vitamin that is made naturally in the bacteria of your intestines.

Several researches show that vitamin K is an essential nutrient for decreasing inflammation and protecting cells that line blood vessels, including both veins and arteries. Frequent consumption of proper levels of vitamin K is important for maintaining healthy blood pressure and decreasing the chances of cardiac arrest. New Zealand Spinach consists of 525.6 µg of vitamin k which is about 438.00% of the daily recommended value.

It is an unavoidable truth that many women suffer from premenstrual syndrome (PMS). In these monthly situations, manganese found in New Zealand Spinach helps to ease the mood swings, headaches, depression and irritability to a significant amount. Research have shown an association between low levels of various trace minerals, including manganese, in women who suffered from particularly severe PMS symptoms, therefore supplementation is suggested. Power of manganese on the hormonal function of the body can be quite visible, so speak with a doctor just before using manganese supplementation to help with PMS, since that is also heavily connected to hormones.

Low levels of vitamin B6 is related with increased symptoms of rheumatoid arthritis (RA), including more severe pain. Earlier research has discovered that people with RA may need more vitamin B6 than healthy people because they experience ongoing muscle aches and joint pain because of prolonged inflammation. New Zealand Spinach consists of sufficient amount of Vitamin B6 which helps in curbing pain and can be beneficial in supplement form for controlling aches in the muscles and joints due to arthritis.

4. Fights off Colds and Flu

Vitamin C is extremely beneficial for immune system and plays a big role in your body’s capability to fight off colds and viruses. 1000 mg of Vitamin C is sufficient to fight off an oncoming cold and 4000 mg per day to get rid of a cold which is previously in your system. Apart from that taking vitamin C for colds and flu can help to reduce the risk of developing further complications, like pneumonia and lung infections. New Zealand Spinach consists of 28.8 mg of Vitamin C which is 32.00% of the daily recommended value.

Copper is a vital part of the healing process and ensures better wound healing. Copper that is found adequately in New Zealand Spinach acts as an exceptionally good immunity builder, and it also works as a cure for anemia, which allows the body to both defend itself better and heal itself faster. Copper is a co-factor in numerous enzymatic processes that result in endothelial growth, or the healing process of tissue.

New Zealand Spinach is extremely beneficial to get rid of chronic fatigue as it consists of ample amount of Iron. Iron is an essential component of hemoglobin, the deficiency caused by iron perhaps lead to exhaustion. Therefore, it is recommended including iron-rich food into your daily diet to keep the body healthy and energetic.

New Zealand Spinach is extremely important to regulate blood clotting, due to the role in amalgamation of prothrombium because it consists of considerable amount of vitamin K. Blood clotting consists of a set of molecules, that constantly circulating through the bloodstream. Vitamin K helps in the regulation of blood clotting simply by transporting calcium around the body. Protein Z helps in increasing the action done by thrombin so as to encourage an association with phospholipids that are present in cell membranes. Vitamin K2 helps in improving blood disorders called myelodyplastic syndromes.

Vitamin B2 is essential for treating several nervous system conditions like numbness, Alzheimer’s disease, multiple sclerosis, anxiety and epilepsy, among others. It is supposed that riboflavin, when used along with vitamin B6, is effective for treating the painful symptoms of Carpal Tunnel Syndrome.

Since Vitamin E is a powerful antioxidant, it helps to decrease environmental damage to your hair. It promotes circulation to the scalp. Vitamin E oil can maintain the natural moisture in your skin, which will help your scalp from becoming dry and flakey. Apart from that Vitamin E will also make your hair look healthier and fresher. You can apply a few drops of vitamin E oil on your hair, particularly if it is looking dry and dull. New Zealand Spinach consists of 2.21 mg of Vitamin E which is 14.73% of the daily recommended value.

Patients suffering from long-lasting asthma may be able to stabilize their breathing with the help of magnesium supplements which help in relaxing the bronchial muscles as well as regulating breathing. Even wheezing and breathlessness can be calmed through administration of intravenous magnesium.