Trending
You are at:Home»Vegetables»Okra Lady’s Finger 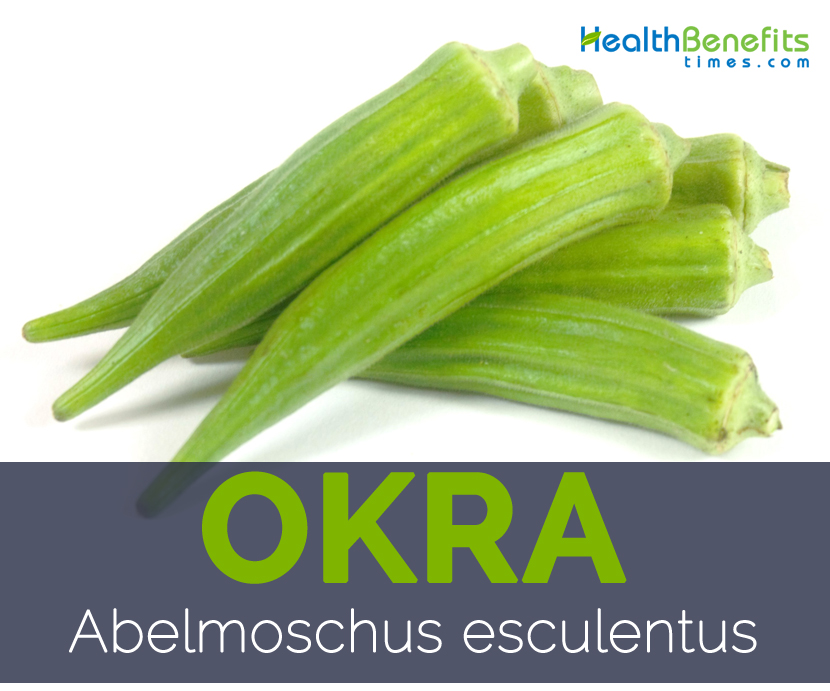 Okra (Lady’s Finger), Abelmoschus esculentus, is an economically important vegetable crop grown in tropical and sub-tropical parts of the world. This crop is suitable for cultivation as a garden crop as well as on large commercial farms. Okra is a nutritional powerhouse which has been grown for more than 2,000 years. Botanically, okra is a perennial flowering plant belongs to the Malvaceae (mallows) family; it is also related to cotton, hibiscus and hollyhock and named scientifically as Abelmoschus esculentus. The term “okra” most commonly refers to the edible seedpods of the plant. The term okra was in use in English by the late 18th century. Other popular common names of okra are Bindi, Gobbo, Gombo, Lady’s Fingers, Ladysfinger Okra, Okro, quingombo, ochro, bamia, bamie, and quiabo. It is called Lady’s Finger in England, Gumbo in the United States of America, Guino-gombo in Spanish, Guibeiro in Portuguese and Bhindi in India. It’s grown and eaten in many regions around the world and can add nutritional benefits to your diet, if used properly. Specialty Okra, Red Burgundy Okra, Silver Queen Okra, Star of David Okra, Alabama Red Okra, Cow Horn Okra, Hill Country Heirloom Red Okra, Burmese Okra, Jade Okra, Emerald Okra, Chinese okra, Purple Okra, Louisiana Short Okra are popular varieties of Okra that are grown throughout the world due to its high nutritive values and delightful taste.

Okra is an annual, tropical, erect herb sized 1-2 m tall and is native to Ethiopia. It is a tropical plant which grows best in warm environments. It is available year-round, with a peak season during the summer months. It thrives in warm tropical or subtropical climate and prefers well drained, rich light and heavy soils that include sandy loam, loam or clay soil. It is a short day plant that grows well in full sun and is rather cold tender. It is tolerant to drought and water-logging. It is quite popular throughout the world because of easy cultivation, dependable yield and adaptability to varying moisture conditions. Its stem is robust, erect, and variable in branching and varying from 0.5 to 2.0 m in height. Leaves are 10–20 cm long, alternate and broad, palmately lobed with 5–7 lobes. The okra flowers are 4-8 cm diameter, with five white to yellow petals, often with a red or purple spot at the base of each petal and flower lasts only one day.

Okra is grown and eaten in many regions around the world and can add nutritional benefits to your diet, if used properly. Okra plant bears elongated, conical cylindrical capsule, 5–35 cm long, with longitudinal ribs down its length, hispid covered with fine hairs. Okra is normally yellowish green to green, but is sometimes purple or white. The pods are the edible portion, are harvested while still tender and immature. They grow rapidly into long (10-30 cm) and narrow (1-4 cm) pod with a tip that is either pointed like a beak or blunt. Its flavor is somewhat like a cross between asparagus and eggplant. Okra fruit contains numerous oval, smooth, striated, globular-reniform, 3–6 mm diameter, dark brown or dark grey, tuberculate seeds. It takes about 45-60 days to get ready-to-harvest fruits. The pods are handpicked while just short of reaching maturity and eaten as a vegetable. The pods, when cut, exude a mucilaginous juice that is used to thicken stews.

Okra supposedly originated in Ethiopia, the mountainous or plateau portion of Eritrea, and the eastern, higher part of Sudan. Okra has been found growing wild in Ethiopia and along the Nile signifying that it truly originated in this area. From this area it was carried Arabia and India. It was probably brought to the United States by French colonists to Louisiana in early 1700. Thomas Jefferson indicated in was being grown in Virginia before 1781. By 1806 several varieties of Okra were being grown. Okra is now much cultivated throughout the tropical and subtropical regions mainly for culinary purposes. Today okra is popular in Africa, the Middle East, Greece, Turkey, India, the Caribbean, South America and the Southern U.S. It is not a very common vegetable in most European countries, except for Greece and parts of Turkey.

In terms of nutritive value, Okra is a great source of vitamins and minerals, including Calcium, Iron, Magnesium, Phosphorus, Potassium, Sodium and Zinc, as well as vitamins A, B1, B2, B3, B5, B6, B9 and C. These are the main causes behind all of the health benefits that come from Okra. Apart from that several amino acids like Tryptophan, Threonine, Isoleucine, Leucine, and Lysine are also found in Okra which is extremely beneficial for our health.

Perhaps the best part of adding okra to your diet is the significant increase it can have on your total fiber intake. Mucilaginous fiber like you find in okra can help move food through your digestive tract by adding bulk. This means that bowel movements are more regular and there is a reduction in gastrointestinal problems like cramping, bloating, constipation, and excess gas. Apart from that it also helps prevent diarrhea, because it adds bulk to watery stools. Lastly, fiber can help to clear out excess cholesterol in the body.(3)

Research has shown that recovery times and “fatigue levels” can be enhanced by use of the okra plant. Including okra in your diet along with a proper healthy exercise routine, you may be able to work out for longer and recover more quickly from your exercise. Cardiovascular activity is an essential part of preventing and treating diabetes. This means that the okra plant may contribute to a more active lifestyle.(4)

Okra consists of considerable amount of vitamin A, as well as other antioxidant components like beta carotenes, xanthein, and lutein. Antioxidants are powerful compounds that may destroy as well as neutralize free radicals, which are the hazardous byproducts of cellular metabolism. Free radicals are actually responsible for the degradation of the cells in the body, including those responsible for vision. Sufficient amount of okra in your diet is extremely beneficial for eye sight, including macular degeneration and cataracts.(5)

Okra is a wonderful source of both vitamins and minerals, including potassium that is an essential aspect of human health. Potassium is essential to maintain proper fluid balance within the body, because it balances sodium. Additionally, potassium helps to relax the blood vessels and arteries, which consequently reduces blood pressure and reduces the strain on the cardiovascular system. This means that clotting and atherosclerosis will be greatly reduced.(6)

Seed extracts of okra have an antioxidant, anti-stress effect in the bloodstream of mice. Managing stress levels is an important part of managing diabetes. Long-term, high stress levels can cause blood sugar levels to spike. Mental health should be a part of any diabetes treatment plan, and using okra and its derivative seeds can be a part of that plan.(7)

Vitamin A present in okra help to protect skin health, by promoting quicker healing, decreasing the appearance of scars and acne, and eliminating wrinkles. This is because the antioxidants are able to neutralize the free radicals which may have damaged those skin cells.(8)

Soluble fiber can help diabetics because of its ability to keep blood glucose levels stable — it affects how sugar is absorbed in the intestines. In a research published in the journal ISRN Pharmaceutics, researchers soaked sliced okra pods in water and then gave rats the solution through a gastric feeding tube — a control group was not fed this solution. Research found that okra helped reduce the absorption rate of glucose and in turn reduced blood sugar levels in the treated rats.(9)

Various antioxidant components present in okra make it very beneficial to fight off free radicals; however the high vitamin C content also means that the general immune system is boosted. Vitamin C helps to stimulate the immune system to create more white blood cells, which can combat the other foreign pathogens and materials in the body that can compromise the immune system.

Other Traditional uses and benefits of Okra