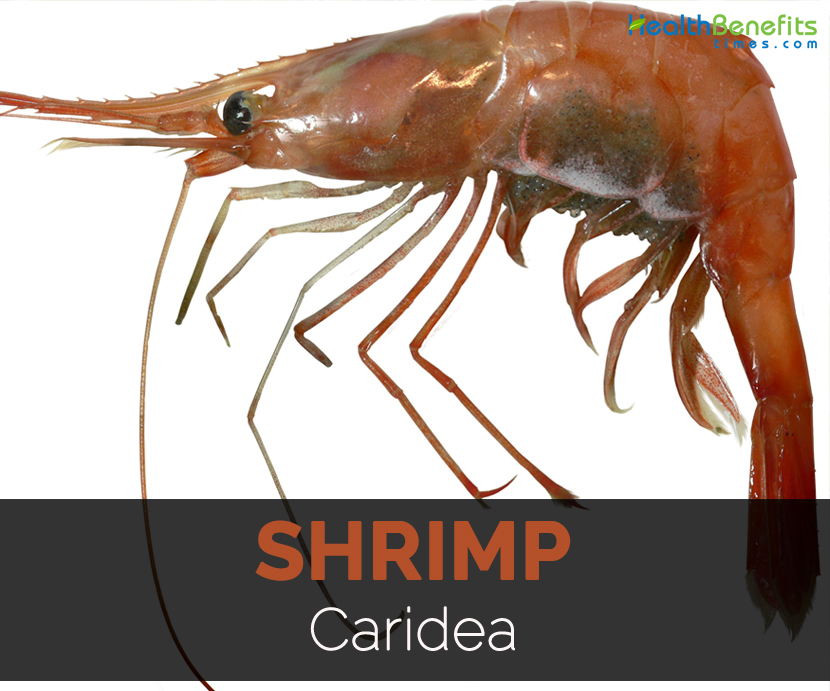 Caridea which is also known as Caridean shrimp, belongs to the phylum Arthropoda and order Decapoda. It lives in both salt and fresh water. Mostly the carideans are omnivorous. The body of the shrimp is divided into three categories such as head, thorax and abdomen (tail). Shrimp have short legs and two pair of claws. It is small in size. Some of the shrimp are hermaphrodites and have separate sexes. They are able to change the sex from male to female. About 2800 species of shrimp are found in world.  The shell of shrimp is hard that is colorless or transparent due to which it becomes difficult to see in water. As they are small, it becomes a prey to predators such as fish, crabs, starfish, sea urchins, whales, puffins, sharks, dolphins and humans.

These shrimp are large in size with tender texture and mild flavor. It adds texture when it is combined with sauces or seasonings. It has mild flavor. It is mostly used in soups, pasta and curry.

It is not large like white shrimp but possess more vigorous flavor. It has firm texture and used in thick stews or stuffs. It has strong flavor. It is mostly used in stuffing and etouffee.

The shrimp having black and white striping in the back is Black Tiger shrimp. It is inherent to Southeast Asia. It has mild flavor and firm texture. It is mostly used with strong seasonings and chili.

It has white, blue and brown varieties. It has got superior taste and firm texture. It is usually served in cocktail style, main entrée and pasta.

Caridean measures about a few millimeters in length when it is grown fully. It has one pair of stalked eyes. It is packed with Vitamin D, protein, Zinc and Vitamin B3. It is a food free from carbohydrates. It possesses cancer preventive, anti-inflammatory and anti-aging properties that help to lower the health problems. It provides relief from eye fatigue, menstrual pain and macular degeneration.

It is an excellent source of Vitamin D and protein. Zinc in high amounts helps to increase the level of leptin in the body which plays a vital role to regulate appetite and fat storage appetite. The high presence of leptin avoids the problems such as inexplicable cravings and overeating. (1)

Skin aging is the common problem which is caused due to the sunlight. The sunlight exposure or UVA results in spots, wrinkles and sunburn. The addition of shrimp to the diet promotes the skin health. It has high content of astaxanthin which is an antioxidant that helps to lower the chances of skin aging associated with sunlight and UVA. The addition of shrimp cocktail to the diet lowers the chances of skin wrinkles and spots. (2) (3)

The studies show that heparin is a compound that helps to cure neovascular AMD. Shrimp has astaxanthin which provides relief from eye fatigue. (4) (5)

The minerals in Shrimp help to promote the hair health. Hair loss is caused due to the deficiency of zinc. It has a vital role in the formation of new cells such as skin or hair cells. (6)

The shrimp paste possess fibrinolytic enzyme which is essential for the thrombolytic therapy which breaks the harmful blood clots in the blood vessels. It helps to prevent the chances of cardiovascular ailments. The high content of Omega-3 fatty acid eradicates the cholesterol in bloodstream. It also lowers the chances of strokes and heart attacks. (7)

The high content of iron in Shrimp is essential for the process of bonding of oxygen in hemoglobin. Iron assist to rise in flow of oxygen to muscles, provides endurance and strength. It also increases the flow of oxygen to brain. The study shows that astaxanthin assist to promote the memory performance, lowers the brain diseases and survival of brain cells. (8) (9) (10)

Shrimp has omega-3 fatty acids which is beneficial cholesterol that balances the adverse effects of Omega-6 fatty acids and also helps to eradicate the menstrual cramps in women. It promotes the flow of blood in reproductive organs by lowering the damage of cholesterol. (14)