Trending
You are at:Home»Herbs and Spices»Nut Grass facts and health benefits 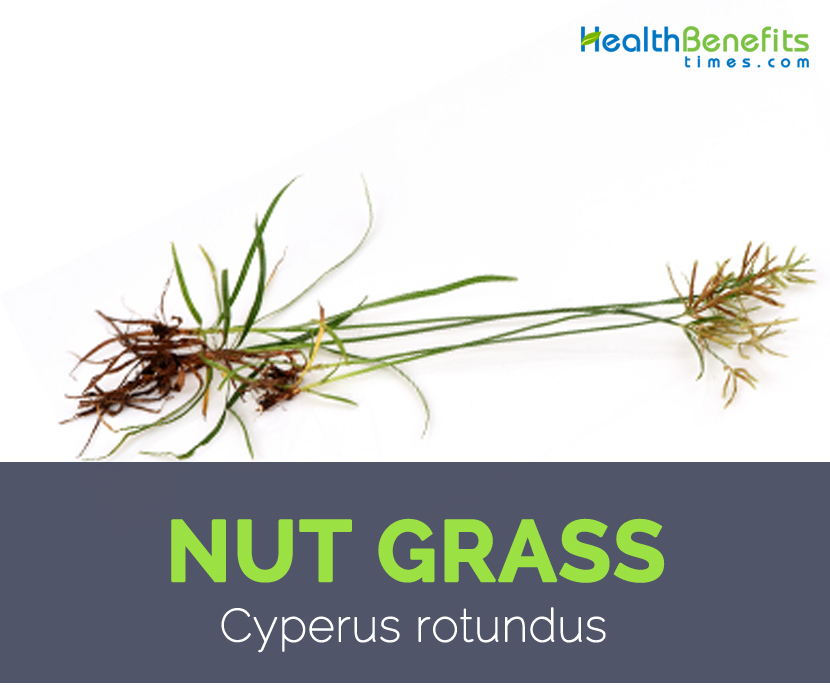 Nut grass(Cyperus rotundus) commonly known as Coco grass, java grass, red nut sedge and purple nut sedge is a perennial plant native to Africa, Southern and Central Europe, and Southern Asia. The grass is a member of the sedge family or the Cyperaceae family of plants so is a close relative of Cyperus esculentus, the tiger nut or chufa. Known to be one of the most invasive plants in the world, nut grass infests over fifty crops worldwide, and this feature has earned it the nickname “the world’s worst weed.” The tubers of the plant are bitter, but they have a nutritional value as food and have been eaten in famine-stricken areas. It has been used to cure a number of ailments in traditional medicine systems around the world. In Pakistan it is used for stomach problems, as a diuretic and stimulant as well as to improve the functioning of the nervous system. Additionally, the root is used as a perfume in India.

It is a colonial, herbaceous, perennial plant with fibrous roots that normally grows from 7-40 cm tall and reproduces extensively by rhizomes and tubers. The rhizomes are initially white and fleshy with scaly leaves which later become fibrous, wiry, and very dark brown with age. Rhizomes normally grow in any direction in the soil. Those growing upward and reaching the soil surface become enlarged forming a structure 2-25 mm in diameter variously called a “basal bulb, a tuberous bulb, or a corm” that produces shoots, roots, and other rhizomes. Rhizomes that grow downward or horizontally form individual tubers or chains of tubers. Individual tubers are dark reddish-brown when mature, about 12 mm thick, and vary from 10-35 mm long.

The dark green, shiny, three-ranked leaf blades arise from or near the base of the plant. They are narrow and grass-like ranging in size from 5-12 mm wide to 50 cm long and have a prominent channel in cross section. The leaf sheaths are tubular and membranous and attach to compact nodes at or near the base of the plant. The upright culms or stems are 10-50 cm tall, smooth, triangular in cross section, and support a much-branched inflorescence. Two to four leaf-like bracts subtend the inflorescence which is umbel-like consisting of 3-9 unequal length branches (sometimes referred to as rays) bearing spikes of 3-10 spikelets. The flowers are bisexual each with three stamens and a pistil bearing three stigmas. Fruit, although rarely produced, consists of a three-angled achene (nutlets).

C. rotundus is thought to have originated in Southeastern Asia and from there it was spread to the rest of the world during the last 2000 years. It has been used by ancient people in Africa (i.e., Nile Valley), China, and eastern Mediterranean as food, perfume, and medicine for centuries. This species first appeared in a Chinese medicine book around 500 AD (Negbi, 1992). The most likely method of introduction of this species into new habitat could be related to human activities. Seeds, tubers, and rhizomes may have been introduced as a contaminant in soil, mud, agricultural machinery, fodder, pastures, and crop seeds. In the United States, it is considered that it was unintentionally introduced during the 1800s. Since the 1880s, this species appears in collections made on islands in the West Indies.

Root of the nut grass plant has been highly valued for many years in traditional Chinese medicine and Indian Ayurvedic medicine for its medicinal qualities. This plant has been used in the treatment and prevention of many ailments. Some of the medicinal uses of nut grass are described below:

Though the scientific evidence is limited, the nut grass plant has been considered to be beneficial for lightening the skin and for reducing the effects of aging. Nut grass helps to lighten the skin tone by preventing the formation of the skin pigment known as melanin. Extrapone, a formulation found in many skin whitening creams is made from the powdered extracts of nut grass roots. It is a natural way of skin lightening without any harmful or toxic side effects. Ayurvedic doctors make use of preparations of nut grass to treat numerous skin conditions like itching, fungus infestation, rashes and herpes.

2. Good for the digestive system

Rhizomes of nut grass have been used in traditional folk medicines in many Asian countries for the treatment of diarrhea, dysentery, intestinal parasites, indigestion, bowel disorders and other stomach problems. Chemical constituents present in this plant make it an effective remedy for combating indigestion. Apart from that nut grass consists of several enzymes and active compounds which help in stimulating various biochemical reactions that helps in promoting a better digestive system.

Nut grass is quite beneficial for controlling epileptic seizures or convulsions. It was found that pretreatment with the ethanolic extract of nut grass offered considerable protection against convulsions (strychnine and leptazol-induced) in mice. Research suggests that the flavonoids found in the ethanol extract may be responsible for the anticonvulsant activity and this extract may be used to develop medicines for the treatment of epilepsy.

Research suggests that nut grass is quite helpful in preventing diarrhea in some people. For the study, diarrhea was induced in mice by giving castor oil. Researchers found that when mice were treated with nut grass, it caused inhibition of diarrhea by about 46 percent.

According to studies, the essential oil and petroleum ether extract of nut grass possess powerful analgesic properties and therefore can be used to relieve pain.

Nut grass is found to have a relaxant action on smooth muscles. Researches on rabbits show that the ethanolic extract of this plant was capable of producing relaxation of the ileum and also produced spasmolytic effect against chemical induced contractions.

Studies showed that the alcoholic extract of nut grass caused slow and persistent lowering of blood pressure. It has been long used in traditional medicine as a remedy for managing high blood pressure.

Nut grass has been found to prevent weight gain. In the study when some rats were given daily doses of nut grass extract for a period of 60 days. The results indicated that these rats showed a considerable reduction in weight without any change in food. So Nut grass is quite beneficial for preventing weight gain.

Nut grass has been known to be beneficial for reducing fever and body temperature. In one study, the alcoholic extract of Cyperus rotundus was found to display significantly high antipyretic activity against fever or pyrexia in albino rats.

Nut grass is found to be effective against vomiting and nausea as it shows antiemetic properties. The ethanolic extract of nut grass was found to prevent apomorphine induced vomiting in dogs.

The effect of alcoholic extracts of nut grass on the serum lipid profile of rats was studied. Hyperlipidaemia was induced in these animals by feeding them a high fat diet.  Treatment with the nut grass extracts showed significant reduction in the total cholesterol, LDL (bad cholesterol) and triglyceride levels. These results suggest that the bioactive compounds found in Cyperus rotundus have the ability to lower cholesterol.

Studies conducted on rats indicates that the ethyl acetate extract given to rats with induced liver damage  showed an important protective effect on the liver by lowering serum levels of total bilirubin and enzymes like glutamic oxaloacetic transaminase, glutamic pyruvic transaminase, and alkaline phosphatase.

Extracts of nut grass have been found to cause significant lowering of blood sugar levels in diabetes induced rats. According to scientists, the anti-diabetic properties of this plant can be attributed to the presence of high levels of antioxidants in it.

Nut grass is a perennial herb that is considered to be a harmful weed in many areas. However, Ayurvedic practitioners have valued the root of the nut grass plant for its medicinal qualities for many years. Its seeds are edible and can be used in extremis, but the rhizome is particularly valued for its oil and this is used in the perfume industry. The nut grass plant, or cyperus rotundus, has been touted as an aid for lightening the skin, reducing the effects of aging and controlling weight, although the research is limited. Extrapone is a specific formulation of nut grass that is used to treat skin conditions. Nut grass has been used to cure a number of ailments in traditional medicine systems around the world. In Pakistan it is used for stomach problems, as a diuretic and stimulant as well as to improve the functioning of the nervous system.