Trending
You are at:Home»Herbs and Spices»Facts about Orchard Grass – Dactylis glomerata 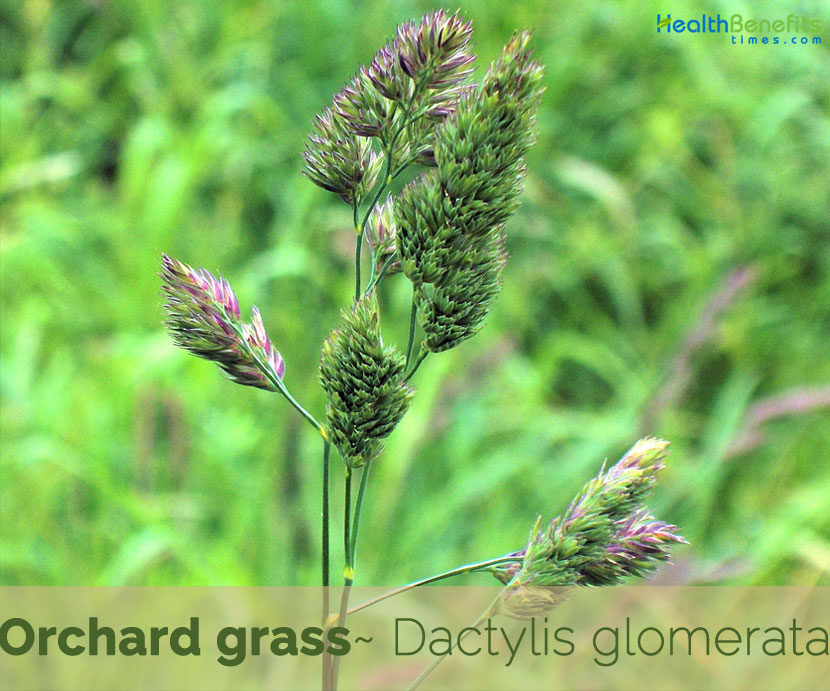 Dactylis glomerata, also known as cock’s-foot, orchard grass, or cat grass (due to its popularity for use with domestic cats) is a common species of grass in the genus Dactylis and Poaceae ⁄ Gramineae (Grass family). It is a cool-season perennial bunchgrass native throughout most of northern Africa (i.e. Algeria, Egypt, Libya, Morocco and Tunisia), Europe (i.e. Denmark, Finland, Ireland, Norway, Sweden, UK, Austria, Belgium, Czechoslovakia, Germany, Hungary, the Netherlands, Poland, Switzerland, Belarus, Estonia, Latvia, Lithuania, Moldova, Russia, Ukraine, Bulgaria, Italy, Romania, Yugoslavia, France, Portugal and Spain), western Asia, Mongolia, Pakistan and northern India. Cocksfoot has been spread as an agricultural grass since at least the 18th century. It has been introduced into most temperate lands as a forage grass, in the USA it is known as ‘Orchard grass’.

Barnyard grass, cat’s grass, cock’s foot, cocksfoot, cocksfoot grass, cockspur, orchard grass, orchardgrass, cocksfoot, hardgrass, rough cocksfoot, Cat grass, Slender Cock’s-foot and Ascherson’s orchardgrass are some of the popular common names of the plant. Orchardgrass is shade tolerant and is common in numerous shady areas such as orchards, hence its common name. The alternate common name, ‘cocksfoot’, is in reference to the shape of the flower head, with its long lower flowering branches that stick out to the side during bloom. The species name, glomerata, means ‘gathered in bunches’, referring to the dense, irregularly rounded flower clusters.

Orchard grass is a coarse, clump-forming, cool-season, tall growing, perennial grass that normally grows about 1.4 to 4 feet (0.5-1.2 m) tall. The plant is found growing in grass and heath land, forests, riparian habitats, freshwater wetlands, coastal areas, meadows, pastures, sand dunes, disturbed sites, roadsides, rough grassland, fields, savannas, woodland borders, orchards, thickets, fence rows, powerline clearances in wooded areas and miscellaneous waste area. The plant performs well on different textured soils ranging from clay to gravely loams and on shallow to deep soils. It does not grow well in saline soils and areas with high water tables. The plants have extensive fibrous root system but no stolons and rarely have short rhizomes. Stems are flattened and are either erect or bend abruptly at the base. Culms are light green, terete, and glabrous; later they become straw-colored.

The leaves of both fertile and infertile shoots have a similar appearance. Their blades can be 3 to 12 inches long (or more) and 1/8 to 1/3 inch wide. They are light green to dark blue-green and hairless somewhat rough on the upper and lower surfaces and margins, and sharply folded (V-shaped in cross-section). The leaf blades of infertile shoots spread outward and remain low, while the blades of alternate leaves on fertile shoots are more arching. Leaf sheaths are light green, hairless, and open toward their apices and have longitudinal veins. The ligule (projection inside on the top of the sheath) is membranous, finely toothed, rounded to pointed and relatively long (1/6 to 1/3 inch long). Auricles (appendages at the top of the sheath) are absent.

Each spikelet consists of a dense tuft of 3-7 lemmas and their perfect florets; there is a pair of sterile glumes at the bottom. The spikelets are whitish green while their florets are blooming, but they later become light tan to brown. The glumes are linear-lanceolate, keeled, and unequal in size; the shorter glume of a pair is about 4-5 mm. in length, while the longer glume is about 5-6 mm. in length. The lemmas are linear-lanceolate and ciliate along their keels; they are about 5-8 mm. in length. In each spikelet, the upper lemmas tend to be shorter than the lower lemmas. Each floret has a pair of white plumose stigmata and 3 stamens with large white anthers. The blooming period occurs from June to September, lasting about 1-2 weeks for a colony of plants. 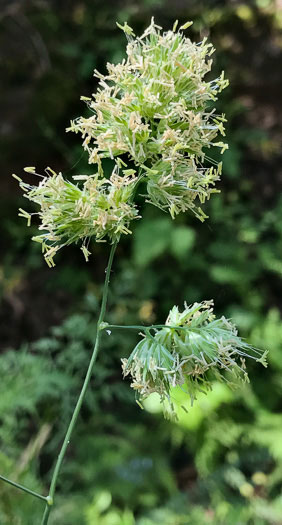 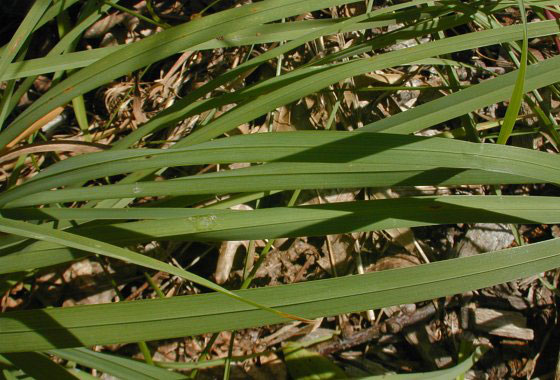 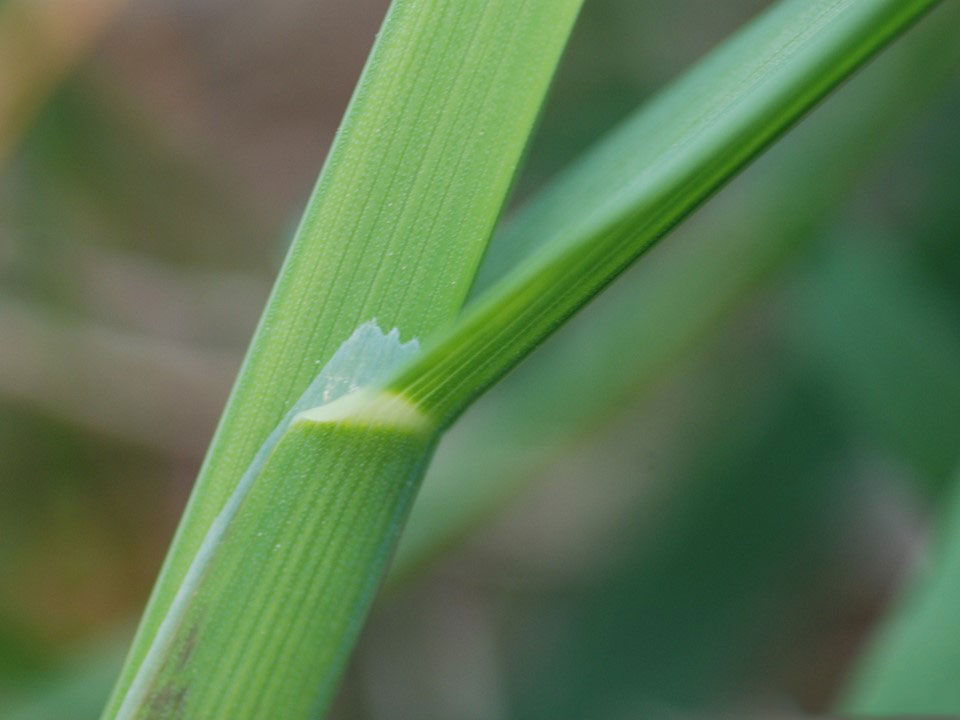 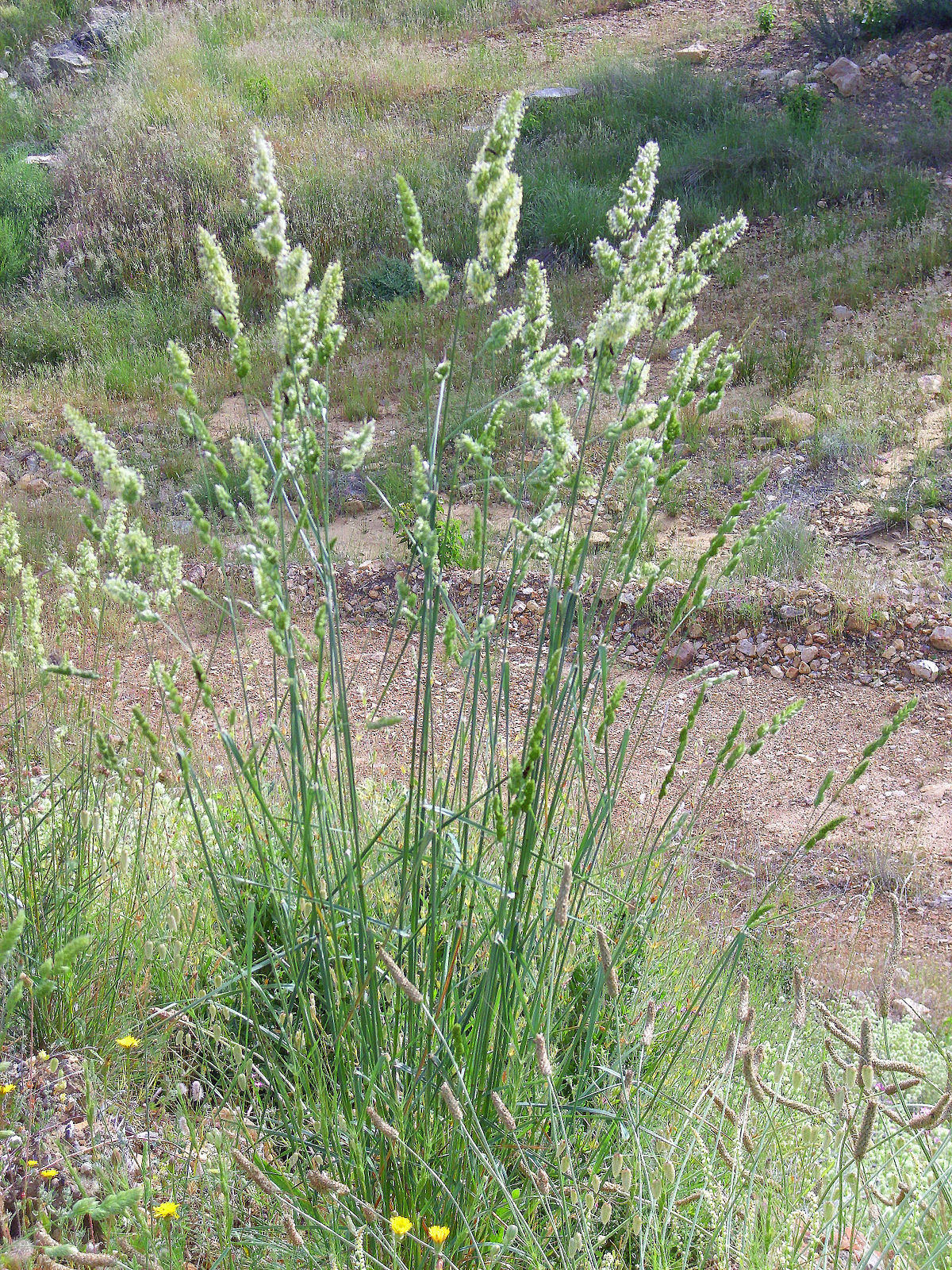 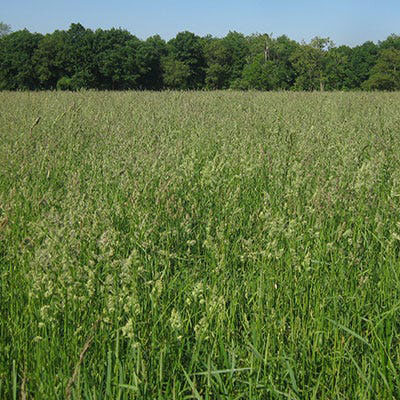 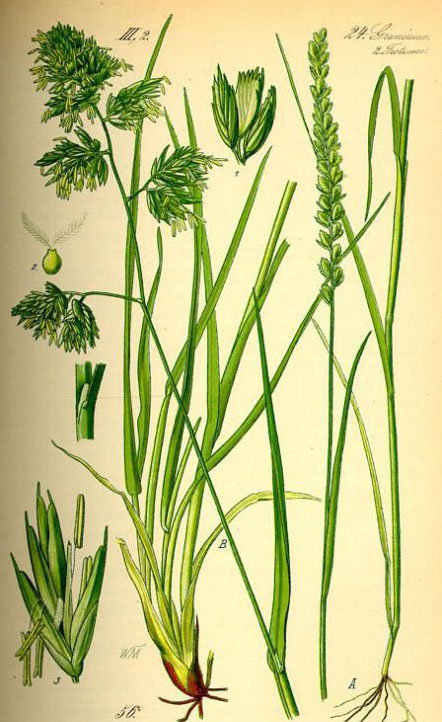 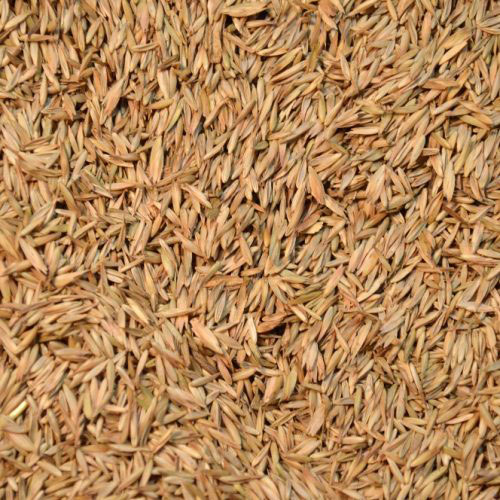 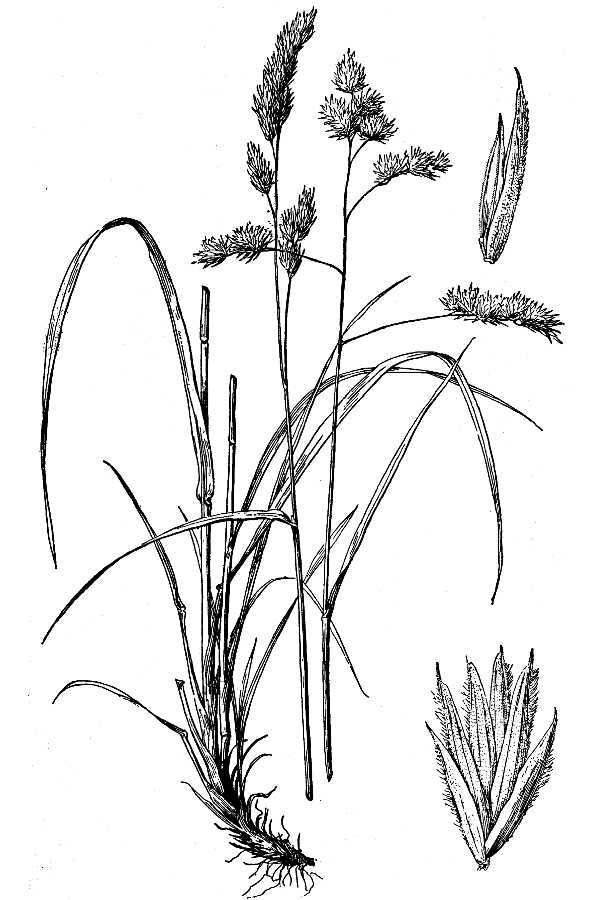 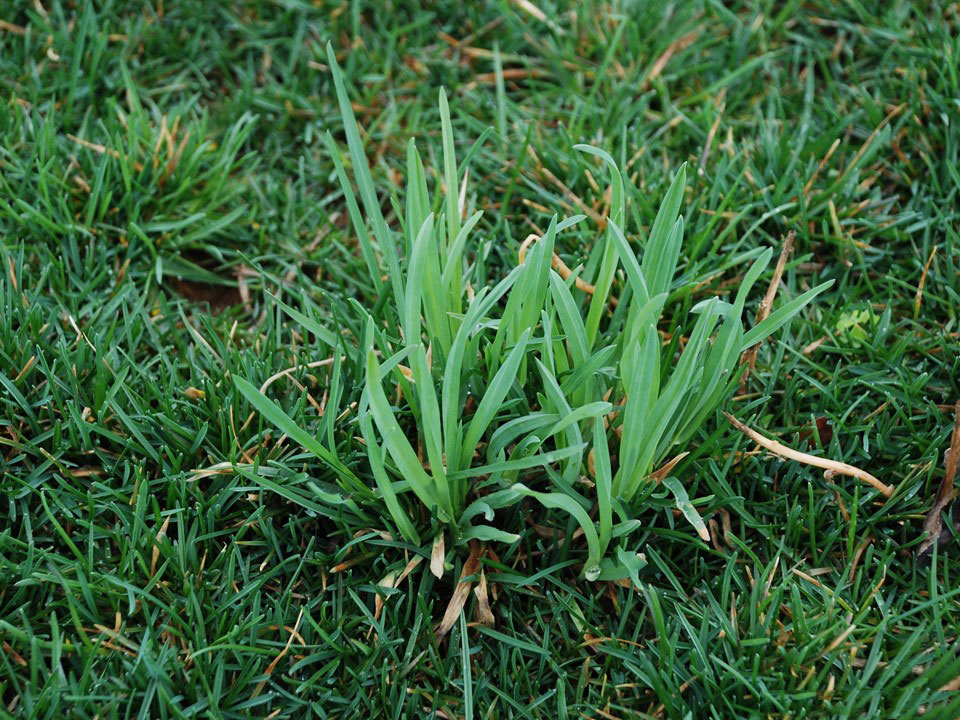 The seed head is dense and spike-like in appearance when it first emerges. With maturity, it becomes open and branched. Seeds are very small, narrow, pointed about 1/3 inch long with 95,000 to 1,300,000 seeds/kg. They are food sources for caterpillars like the gatekeeper and meadow brown; while the seeds are eaten by finches and gamebirds.

Beddows (1959) says that D. glomerata can easily be controlled by ploughing, and that it does not survive heavy trampling by livestock. Muyt (2001) says that plants can be dug out but that the crown must be removed to prevent regrowth. Where plants are in seed he suggests cutting and bagging the stems before removing the rest of the plant. Muyt (2001) also says that stands can be slashed regularly during the main growing season to limit seed production. When a weed in turfgrass it can eventually be eliminated by close mowing (Hathaway et al., 2004).

Although a few insect species seem to be confined to D. glomerata (Beddows, 1959) there has never been any interest in using any of these for biological control: the species is so-long established and so valuable in many places that this would be impractical.