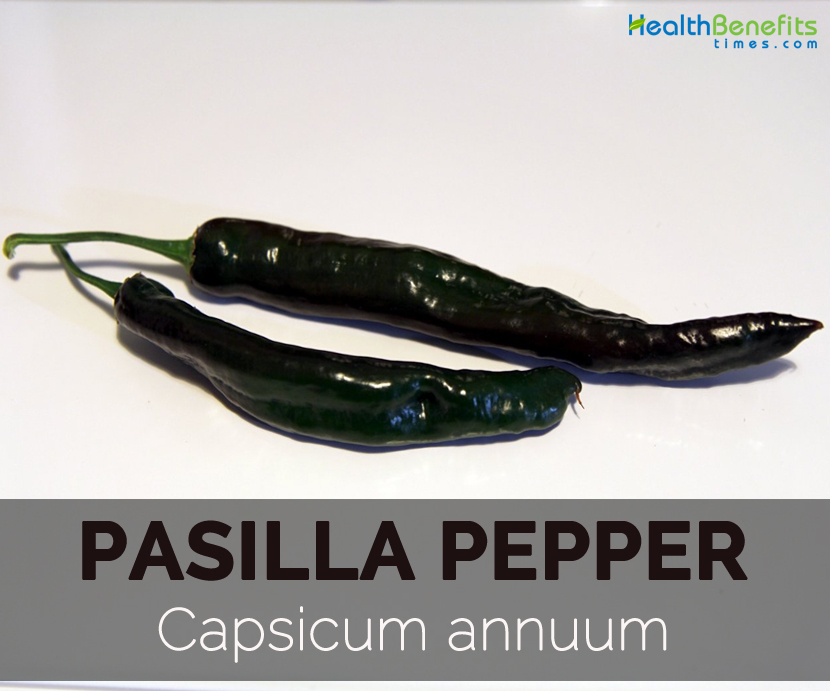 Pasilla pepper is a chile pepper which belongs to the Capsicum annuum and which is widely used in cuisines. Its heat (rating 1,000-2,000 heat units on the Scoville scale) is considered mild to medium hot. Pasilla peppers are used in sauces, stews and soups. It is also called Chile negro, Chilaca chili pepper, Mexican negro Chilaca. The average length and diameter of Pasilla pepper is 6 to 8 inch (15 to 20 cm) and 1.0 to 1.5 inch (2.5 to 4 cm) respectively. The plant is herbaceous; annual which grows upto 18 inches in height and 12 inches in diameter. The leaves are simple, alternate, glossy; 3 inches long and 1.4 inches side. The plant bears a purplish flower of 1 inch as a diameter and grows in clusters and is not ornamental. There are numerous yellow seeds of kidney like.

Pasilla pepper is native to Southern North America and Northern South America. Pasilla pepper was originated in the Puebla region of South of Mexico City. Pasilla means little raisin which was titled for dark wrinkled skin as well as raisin aroma. It is dried form of Chilaca Pepper which is a Mexican chile commonly used in various dishes.

Along with enhancing the taste, the intake of this pepper helps to promote the health. It provides numerous health benefits. Some of which are described below:

Vitamin B6 helps to develop the brain and its functions. The studies show that deficiency of Vitamin B6 affects the memory function, cognitive impairment, dementia and Alzheimer’s disease. Vitamin B6 controls the homocysteine levels which are the main cause of heart disease and damage of neurons. Vitamin B6 assists in the production of hormones such as norepinephrine and serotonin which controls energy, mood as well as concentration. The researchers believe that low level of serotonin leads to ADHD in children which leads to the behavior and learning disorders.

Vitamin A helps to prevent macular degeneration in the people which is the cause of age related blindness. The study shows that those who intake vitamin C, vitamin A, vitamin E, copper and zinc helps to reduce the chances of macular degeneration.  The studies show that Vitamin A eye drops helps to treat dry eyes. Vitamin A also slows down the growth of Stargardt’s disease which might cause vision loss in the young people.

Vitamin B2 helps to metabolize energy from foods and maintain proper nerve, brain, hormone and digestive function. Due to the deficiency of riboflavin, the fat, carbohydrate and protein found in foods could not be digested properly and used as a fuel. Riboflavin helps to balance adrenal function, thyroid activity. The deficiency of riboflavin increases the chances of thyroid ailments. It helps to calm the nervous system, chronic stress, regulate hormones which manage the energy, appetite, temperature and mood.

Iron helps to assist the brain function as it supplies oxygen to the brain. About 20% of the oxygen is used by brain in the body. The deficiency of iron can decrease the mental and memory functions. Its deficiency can lead to cognitive and psychomotor abnormalities in the children and infants.

The research showed an inverse relationship between the insoluble fiber and diastolic or systolic blood pressure, triglycerides and cholesterol levels. Additionally, soluble fibers help to decrease LDL cholesterol by hindering the dietary cholesterol absorption. Those who intake the diet rich in fiber decreases the chances of hypertension, metabolic syndrome and heart disease.

Potassium is vital in the functioning of cells. It is essential for the electrical signaling and nerve impulses on which the brain functions depend on. The deficiency of potassium results in poor concentration, fatigue, mood changes and problem in learning. Brain fog is the condition of being unable to focus, upbeat mood and difficulty in clear headed which is caused due to the low presence of potassium.

Copper possess an anti-inflammatory properties that assist in eliminating stiffness and pain that is related with arthritis. It assists to strengthen muscles, repair connective tissue and reduce the joint pain. The arthritis patients wear copper bands or bracelets because it is considered that the copper can reduce the painful symptoms of arthritis as it is absorbed by the skin.

Niacin helps to treat the diabetes because it helps to balance the level of blood sugars. It is considered that Vitamin B3 promotes the efficiency of oral drug treatment which is used to manage diabetes. Most of the diabetic patients use niacin to control the level of blood glucose and reduce the chances of blood cholesterol as well as heart disease.

Folate helps to lower the chances of neural tube defects like anencephaly or spina bifida. The deficiency of folate can lead to birth defects such as limb and heart malformations. Folate helps to replicate DNA. Without Vitamin B9, the fetus cells could not be grown properly. It is considered as the vital vitamin required for the healthy pregnancy.

Kidneys are the organs of bean shape which eliminates the excess presence of organic molecules found in the blood. Phosphorus helps to eliminate the waste and toxins by increasing the frequency of urine. The digestive organs, kidneys depend on magnesium, potassium and phosphorus to balance the levels of sodium, uric acid, fat and water in the body.