Trending
You are at:Home»Herbs and Spices»Cayenne pepper facts and health benefits 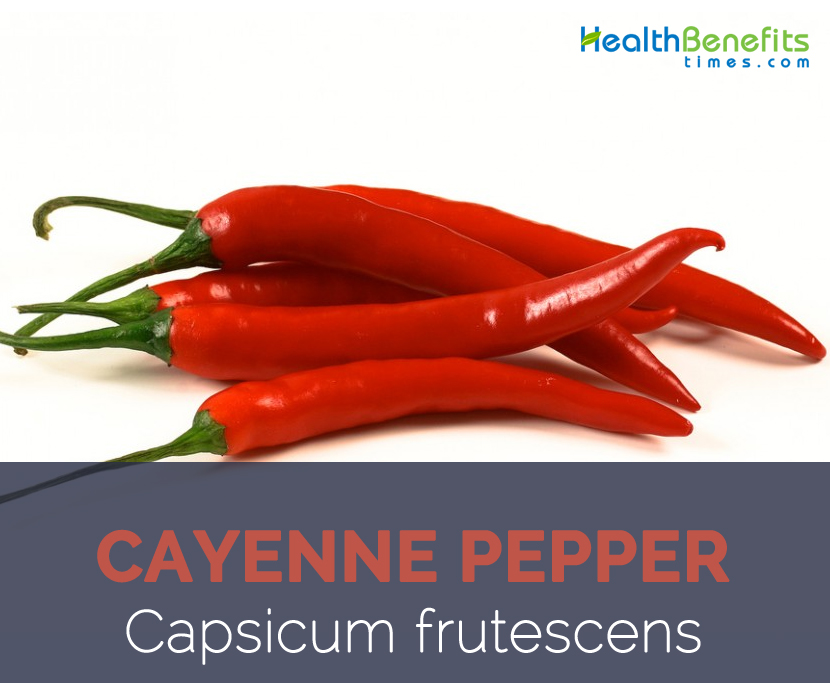 Cayenne pepper (Capsicum frutescens) also known as cow-horn pepper, Bird’s-Eye Chili, Bird’s-Eye Pepper, aleva,  Bird Pepper, Cayenne, Chile De Cera, Goat Pepper and Guinea Pepper is a member of Capsicum genus and nightshade family (Solanaceae). Cayenne pepper is considered to have originated from southern USA, Mexico to northern and eastern South America. The name “cayenne” comes from the town where these peppers originated, in French Guiana off the northeast coast of South America. It is also said that Christopher Columbus discovered these spicy little guys while he was traipsing around the Caribbean, and brought them with him when he traveled back to Europe as a replacement for the then-expensive black pepper. It is used in cooking spicy dishes, as a powder or in its whole form or in a thin, vinegar-based sauce. It is usually rated at 30,000 to 50,000 Scoville units. Fiercely hot and pungent cayenne pepper is one of the widely used spicy ingredients in many cuisines.

Cayenne pepper is a hot chili pepper in the Capsicum family that is frequently added to dishes to increase their spiciness. Peppers are normally small berry, that are pungent, ellipsoid-conical to lanceoloid or fusiform, 10–20 mm long, 3–7 mm in diameter, much smaller and narrower than C. annuum , pericarp fleshy and firm, hollow and are green when young to mostly red or orange when mature. They need approximately 100 days to mature. Mature cayenne fruit consists of numerous tiny, flat, disk-shaped, off-white or cream colored seeds that are clinging on to central white placenta. Mature pods have deceptively mild smell and Strong spicy taste. The hot and spicy taste of cayenne pepper is mostly due to a substance known as capsaicin, which helps reduce pain. The fruit is eaten raw or cooked, or it is dried and powdered into a spice that has been used for centuries in meals and medicines. Cayenne is made from the ripened fruit, varying from red to yellow. The powder is red or red-brown in color. Some cayennes include the ground seeds and are hotter than those which exclude them. Severely hot and pungent cayenne pepper is one of the widely used spicy ingredients in many cuisines since ancient times.

Cayenne variety of chili pepper plant is native to the Central American region where it was used as a spicy ingredient in Mexican cuisines for several thousand years. This spicy pod was introduced to the rest of the world, especially in the Indian subcontinent, by Spanish and Portuguese explorers during 16th and 17th centuries. It is also believed that Christopher Columbus discovered these spicy little guys while he was traipsing around the Caribbean, and brought them with him when he traveled back to Europe as a substitute for the then-expensive black pepper. They are now one of the important commercial crops in India, Pakistan, China, Argentina and USA.

Cayenne, also known as capsicum, is an extraordinary spice with amazing health benefits. From hypertension and cancer to arthritis and infections, cayenne treats a slew of your health woes, and all it takes is a dash to reap the benefits of cayenne. Listed below are some popular health benefits of using cayenne pepper:

Apart from that Cayenne pepper also encourages the flow of enzyme production, which is essential for our digestive system to work accurately. It stimulates gastric juices that aid the body’s capability to digest food and toxins.

Capsaicin present in cayenne encourages secretions that help to clear the mucus from the nose and lungs by clearing the sinuses and causing sweating. Apart from that tea mixed with cayenne pepper is supposed to be good for treating conditions of cold and flu.

Cayenne is an anti-inflammatory agent that has power to prevent allergies and the symptoms related to allergies. A food allergy is a measurable response to consuming a specific food. Food allergies, or intolerances are caused by a condition known as leaky gut (intestinal permeability), when proteins and food particles pass through the gut and cause systemic body inflammation. Regular consumption of Cayenne pepper helps to fight all kinds of allergies easily.

Blood clots are actually blockages in the arteries and blood vessels that limit blood flow through your circulatory system. Cayenne inspires fibrinolytic activity and help to prevent blood clots. This is also the reason why cayenne pepper is effective in avoiding heart attacks. The capsaicin in cayenne pepper helps to clear away artery-narrowing lipid deposits, and opens arteries and blood vessels to clear away clots.

Research  have found that consuming cayenne pepper during breakfast creates less appetite, so people eat less calories throughout the day. It also burns excess fat because it’s a metabolic booster. As one of the key anti-inflammatory foods, cayenne pepper benefits also include weight loss. Cayenne pepper has the power to calm inflammation and bloating that comes from allergies, food sensitivities and infections.(1)

Regular consumption of cayenne pepper helps to stimulate circulation and eliminate acidity. Cayenne pepper restores the circulatory system by opening the capillaries and regulating blood sugar; it also helps the digestive system that moves bacteria and toxins out of the body. Cayenne pepper also increases body temperature and boosts metabolism.

Cayenne pepper has the ability to kill fungus and prevent the formation of fungal pathogens. Research against cayenne consumption found that it was active against 16 different fungal strains, including Candida.

Candida is a fungus that helps with nutrient absorption and digestion, when in proper levels in the body. When it overproduces however, the typical candida symptoms may appear; this includes hormone imbalance, joint pain, digestive problems and a weak immune system.(2)

Research has proven that regular consumption of Cayenne pepper help to stop heart attacks. Cayenne helps to decrease cholesterol levels in the blood and helps to dissolve fibrin, which causes the formation of blood clots. It also reduces triglyceride levels.

Studies have found that cayenne pepper relieves pain after surgery, like mastectomy or an amputation. It also eases pain from nerve damage in the feet or legs from diabetes, lower back injuries, osteoarthritis and rheumatoid arthritis, as well as fibromyalgia symptoms like joint or muscle pain.

Psoriasis occurs when skin cells replicate too rapidly, and it leads to swollen spots below the skin covered with whitish scales on top. Scaly patches are actually areas of inflammation and excessive skin production.

Other traditional uses and benefits of Cayenne pepper