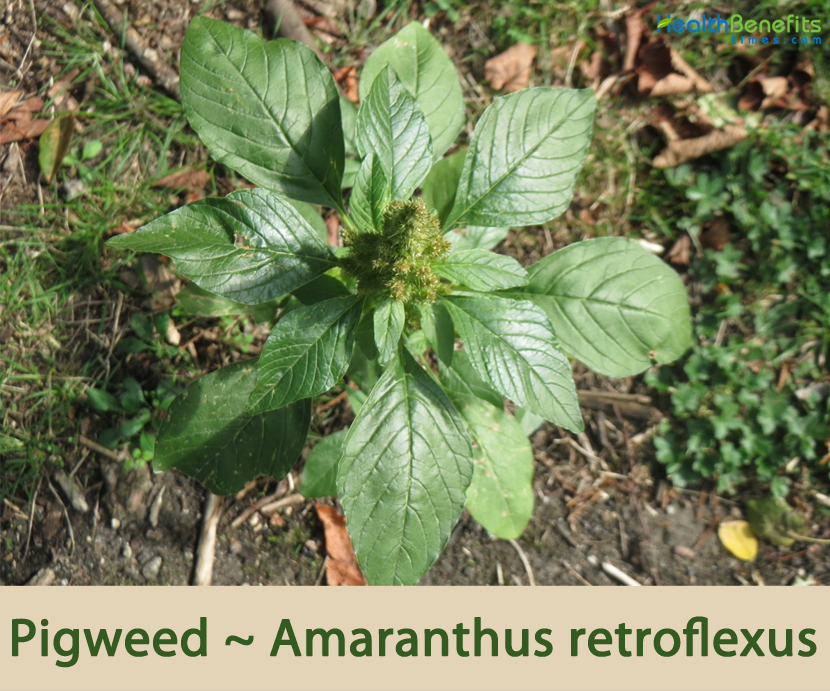 Amaranthus retroflexus is a species of flowering plant in the Amaranthaceae (Amaranth family) with several common names, including pigweed, American pigweed, Common Amaranth, Careless weed, Pigweed redroot, Red-root amaranth, Redroot, Redroot pigweed, Reflexed amaranth, Rough pigweed, Wild-beet amaranth, wild amaranth, slender pigweed and Common Tumble Weed. Name “pigweed” refers to the fact that this plant usually grows on the pastures where pigs are fed. The plant is native throughout North America, from Canada to Mexico, and from the Atlantic to the Pacific coasts.  It is also found throughout much of the rest of the world, including Europe, South America, Eurasia, and Africa.  It is a native of tropical America. The plant was at one time cultivated by the native North Americans for its edible leaves and seeds. It is still occasionally gathered from the wild and used locally. The plant is eaten as a vegetable in different places of the world. It is used in Kerala to prepare a popular dish known as thoran by combining the finely cut leaves with grated coconut, chili peppers, garlic, turmeric and other ingredients.

Stems are few-branched to many-branched, moderately to densely hairy particularly in the upper plant, green to red to striped green/red, and have a pink to reddish taproot, which is the source of the common name. They are 10 cm – 2 m high, but usually 50 – 90 cm, simple or branched, lower part thick and smooth, upper part usually rough with dense short hair. Plants are typically erect but when subject to mowing can be low and more sprawling, the branches spreading from the base and rising near the tips (decumbent).

Leaves are numerous; alternate, 1 to 6 inches long, ½ to 3 inches wide on leaf stalks that are 2/5 to 3 inches (1–8 cm) long. Leaves are egg to diamond-shaped, widest at or below the middle, hairless to sparsely hairy, more densely hairy along the veins on the underside. They are dull green above but lighter green and with prominent whitish veins below. They are bluntly pointed at the tip, wedge-shaped to somewhat rounded at the base, on a hairy stalk half to about as long as the blade. Edges are toothless and often somewhat wavy.

Tiny flowers are tightly packed in small clusters (glomerules) in a spike-like arrangement at the tips of branching stems and arising from leaf axils, with a few to several flowers in a glomerule. The spikes are thick, dense, relatively short, erect to ascending but not stiff, and usually numerous. Flowers are either male or female, both on the same plant (monoecious) and usually mixed within the same glomerule.

Both male and female flowers have 5 tepals that are 2.5 to 3.5 mm (to 1/8 inch) long, thin, translucent whitish with a green midrib, more or less oblong and rounded at the tip, with a minute, sharp point at the apex (mucronate). Male flowers have 3 to 5 yellow stamens, female have a 3-parted style at the tip of an oval green ovary and are shorter than to about as long as the tepals. At the base of each flower is a bract that is longer than the tepals, green, tapering to a pointed tip, with a midrib that extends to a pale, spine-like tip. Flowering occurs from June through November.

Fertile flowers are followed by tiny, smooth or slightly rugose, broadly obovoid to broadly elliptic capsules, less than about 1/17 of an inch (1.5 mm) long. Fruit open around the middle by a cap like lid to release one seed each.

Seed is elliptic to obovate in outline, somewhat compressed with an obtuse marginal rim, cross-section elliptic to lens-shaped or barely fusiform, with a protruding notch along the margin where hilum occurs and from which a shallow depression runs inward for a short distance, 0.9–1.3 mm diameter and 0.6–1 mm thick. Surface is shiny and smooth, dark reddish-brown to black colored. 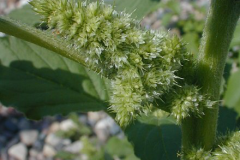 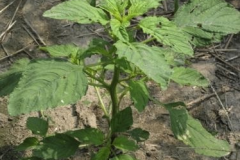 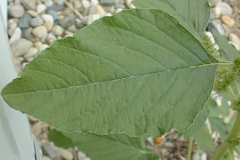 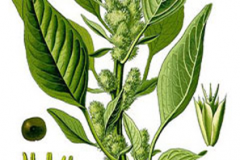 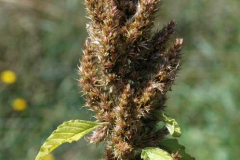 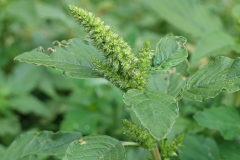 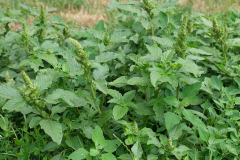 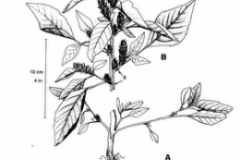 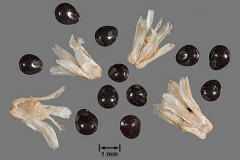 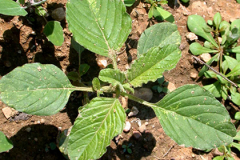 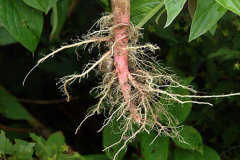 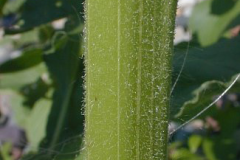 Pigweed leaves and seeds aren’t only delicious, but they’re also nutritious. They’re rich in vitamins A and C as well as other important minerals, such as iron, manganese, calcium, zinc, copper, and magnesium. Adding pigweed into your daily diet can improve your health and immunity immensely. A nutritionist has explained exciting health benefits of pigweed which are listed below

Pigweed is considered best to consume during the summer season. If we take pigweed gravy with cold water rice during the summer season, it will cure body heat, dysuria, prickly heat, coup rap. Pigweed also acts as a medicine for the top 5 summer diseases like chickenpox, herpes, jaundice, typhoid and measles commonly found near villages. Extract of pigweed applied to prickly heat will reduce the inflammation and make it cool and dry. The village people believe that a paste prepared using pigweed applied on herpes boils will make it cool and dry and cures the condition of the disease.

For underweight children, pigweed with capsicum and onion included in their diet will increase their body weight. If we cook pigweed as soup with garlic, tomato, cumin, pepper, it will reduce the overweight and makes you thin. Because the pigweed is less in calorie it can be taken as a complete food for a meal.

For dysentery and diarrhea, the seeds of pigweed smashed in tender coconut water will act as good medicine.

To improve your brain health, drink a cup of equally mixed pigweed extract with Bhringraj extract. Pigweed consists of omega 3 fatty acids and it helps in brain development. It also prevents you from the symptoms of ADHD.

Pigweed consists of a large amount of vitamin A, C, and vitamin B complex. It prevents you from lung infections. It acts as one of the medicines to cure mouth cancer.

Growing pigweed at home is equal to keeping a first aid box. Pigweed cures on fire burns, scabies just wash the complete plant grind it and apply it to the infected area this acts as an antiseptic cream.

Complete pigweed plant ground with tender coconut water or buttermilk and make it as a ball and mix it with cold rice water and drink it every morning before breakfast this cures jaundice, scouring and leucorrhea.

Cook the pigweed with garlic and include in your diet that will reduce the level of cholesterol in your blood. Also, your body will get cool, if you include frequently pigweed in the diet.

Pigweed is beneficial from children to old age people; it purifies the blood and help to recover the body from chronic illness. It increases milk production in breastfeeding mothers.

Traditional uses and benefits of Pigweed

Seedlings can be controlled by cultivation, but older plants often recover from mechanical damage and produce axillary inflorescences. Soil solarization under plastic can provide control of A. retroflexus if high temperatures are achieved for prolonged periods of time.

A. retroflexus is readily controlled by most herbicides which inhibit photosynthesis, such as atrazine, simazine, metribuzin, linuron and bromoxynil. It is also highly susceptible to the synthetic auxin herbicides, such as 2, 4-D or dicamba, and sulfonylurea and imidizolinone herbicides, such as imazethapyr, thifensulfuron-methyl, rimsulfuron and nicosulfuron. Most other herbicides for control of broad-leaved weeds also provide good control including acifluorfen, fomesafen and pendimethalin. Its pattern of intermittent germination throughout the growing season, however, makes the application of residual soil-applied herbicides, or sequential post-emergence treatments, necessary in heavily infested fields. A. retroflexus can be controlled by the soil fumigant methyl iodide.

Biological control of A. retroflexus with fungal pathogens has been reported. The pigweed flea beetle, Disonycha glabrata, is native to the southern USA and South America. It has been promoted as a control agent of A. retroflexus, but it gives incomplete control in the field because beetle populations develop too slowly and too early in the season to prevent competition with the crop and seed production.

Herbs and Spices P
Share. Twitter Facebook Google+ Pinterest LinkedIn Tumblr Email
Previous ArticleHow The First Step To A Wellness Journey May Be A Dental Appointment
Next Article How Does Iron Infusion Services Help You?