Trending
You are at:Home»Fruits»Facts about Pin Cherry ~ Prunus pensylvanica 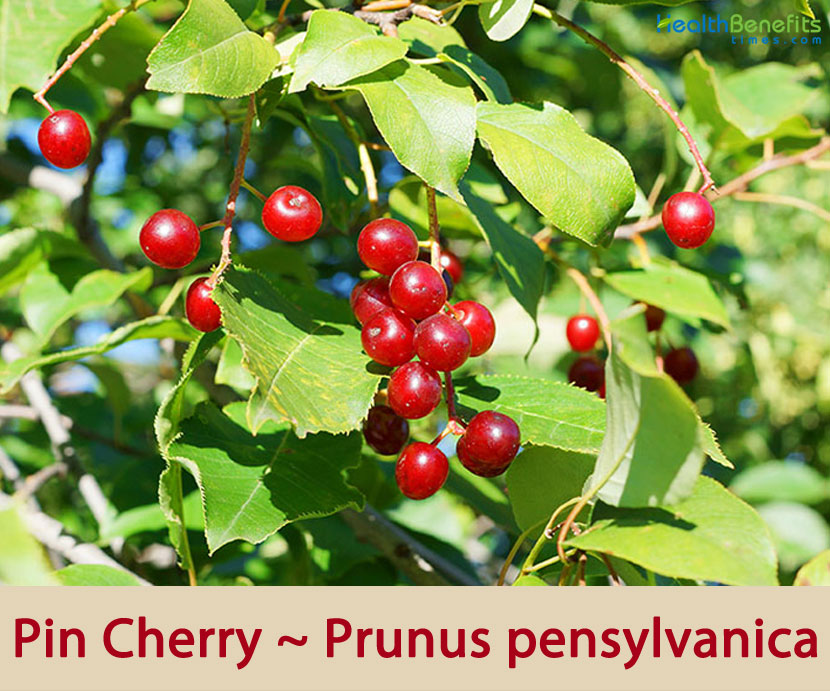 Prunus pensylvanica, also known as bird cherry or pin cherry is a North American cherry species in the genus Prunus and in the Rose Family (Rosaceae). The plant is native to Canada from Newfoundland and southern Labrador to British Columbia and the southern Northwest Territories. Additionally it is very common in New England and the Great Lakes region. It can also be found in the Appalachian Mountains as far south as northern Georgia and eastern Tennessee. Few of the popular common names of the plants are Pin cherry, Bird cherry, Fire cherry, Red cherry, Wild red cherry, Northern pin cherry, pigeon cherry.

The genus name is Latin for “plum tree.” The family name comes from the Latin for “rose.” The species name apparently comes from the fact that these trees are common in Pennsylvania. This tree has no commercial use although a cherry jelly or jam can be made from the fruit and some attempts at marketing this product have been made. The tree is harvested from the wild for local use as a food, medicine and source of materials. It can be used as a pioneer species for restoring native woodland. Prunus pensylvanica is a widespread species with a stable global population. The plant is classified as ‘Least Concern’ in the IUCN Red List of Threatened Species.

Pin Cherry is a small, fast-growing, short-lived, unarmed, deciduous shrub or small tree that normally grows about 15 to 50 feet (5-15 m) tall and has a trunk diameter of about 4 to 20 inches (10-51 cm). However, trees up to 100 feet tall (30 m) have been found in the southern Appalachians, with the largest size attained on western slopes of the Great Smoky Mountains. In western North America, pin cherry may be generally smaller with an arching shrub form, growing 5 to 15 feet (1.5-4.5 m) tall and spreading 5 to 10 feet. The tree generally has a straight trunk and a narrow, round-topped crown, though it may form thickets. Branches, at first ascending, become more or less horizontal and spreading with age. The plant is found growing in rocky woods in moist rather rich soils, wet woodlands, old tamarack bogs, inter dunal swamps, open forest, plains, valleys to lower subalpine, thickets along streams and lakeshores, in clearings, roadsides, burned-over areas, disturbed sites, rocky hillsides and cliffs. It grows on infertile rocky ledges, sandy plains, moist loamy soils, and rich loams.

The trunk is fairly straight and sometimes leaning. The crown is narrow and rounded at the top. The branches on young trees are ascending. As the tree ages, the branches become nearly horizontal. 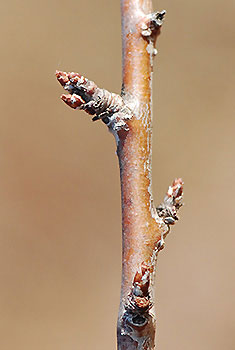 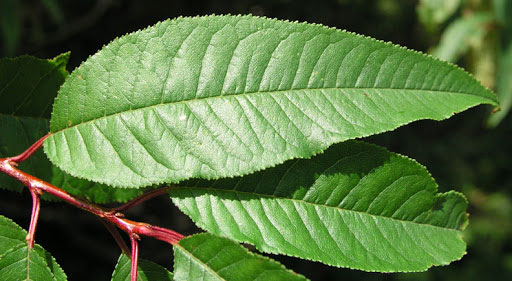 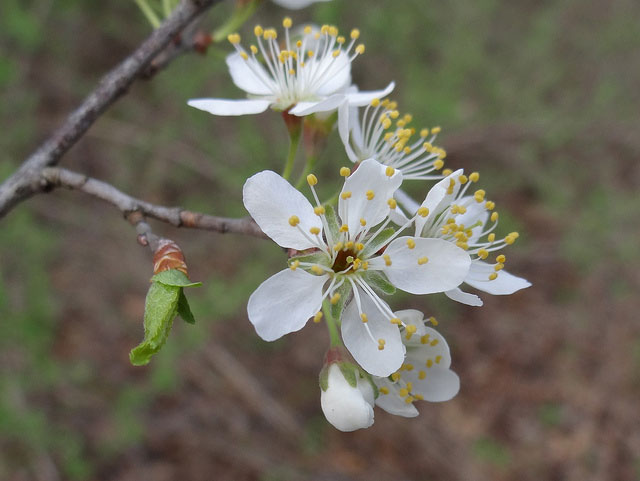 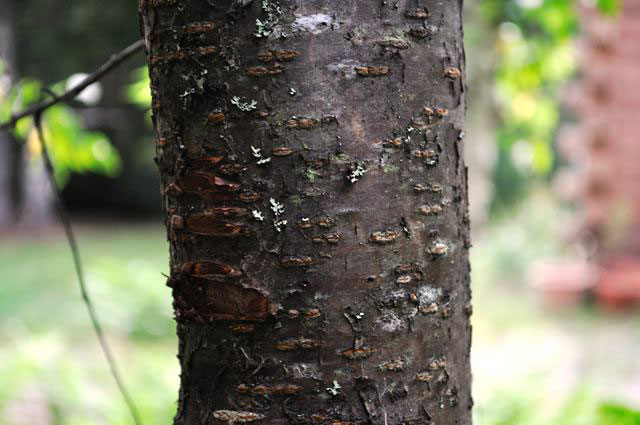 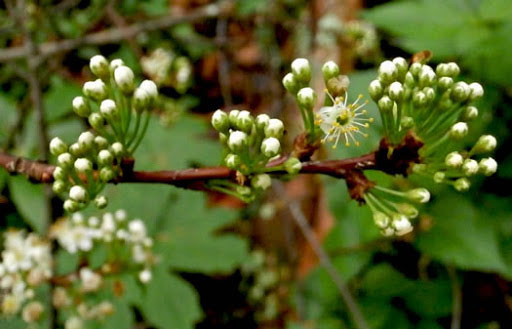 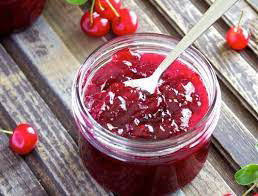 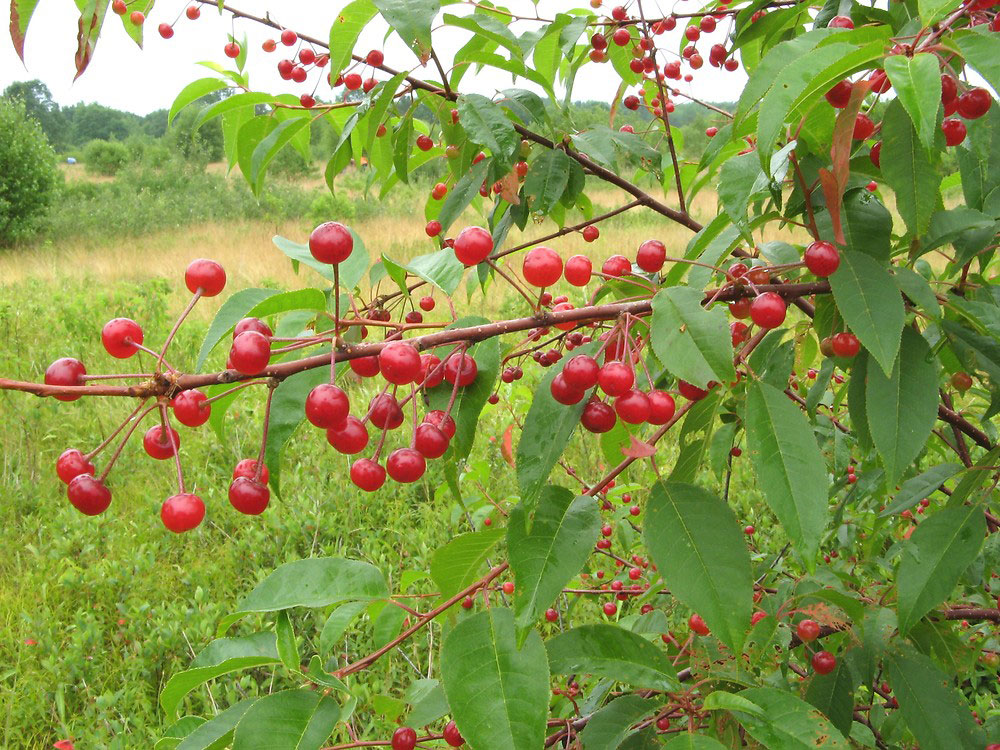 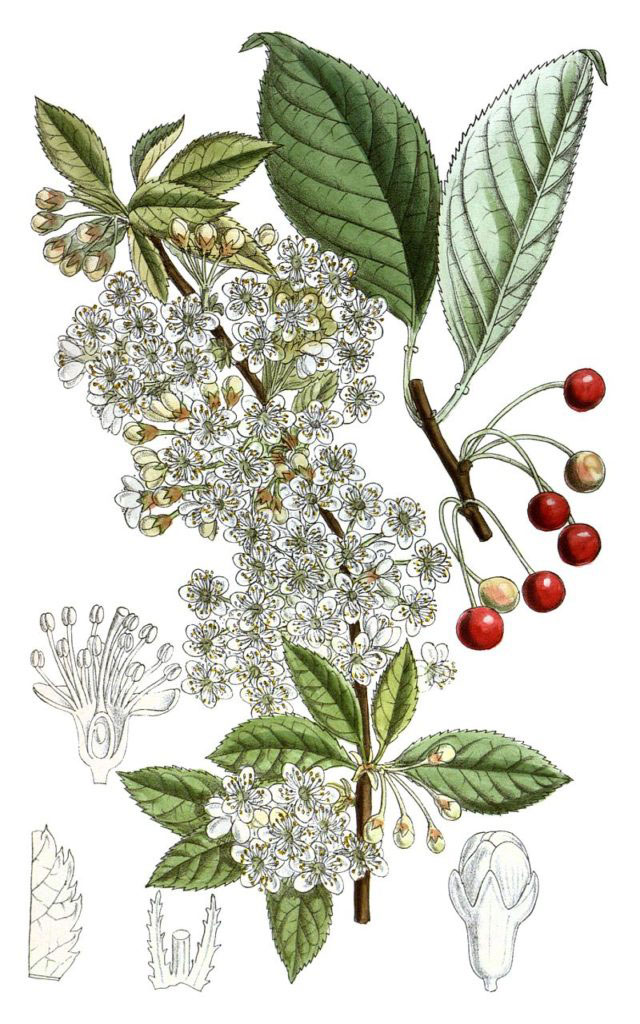 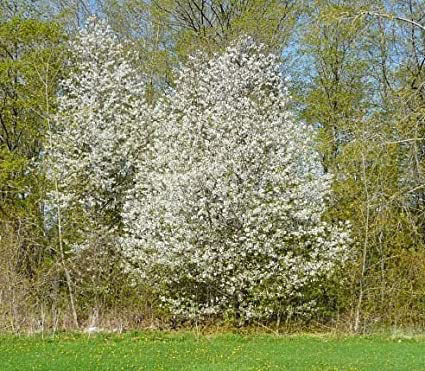 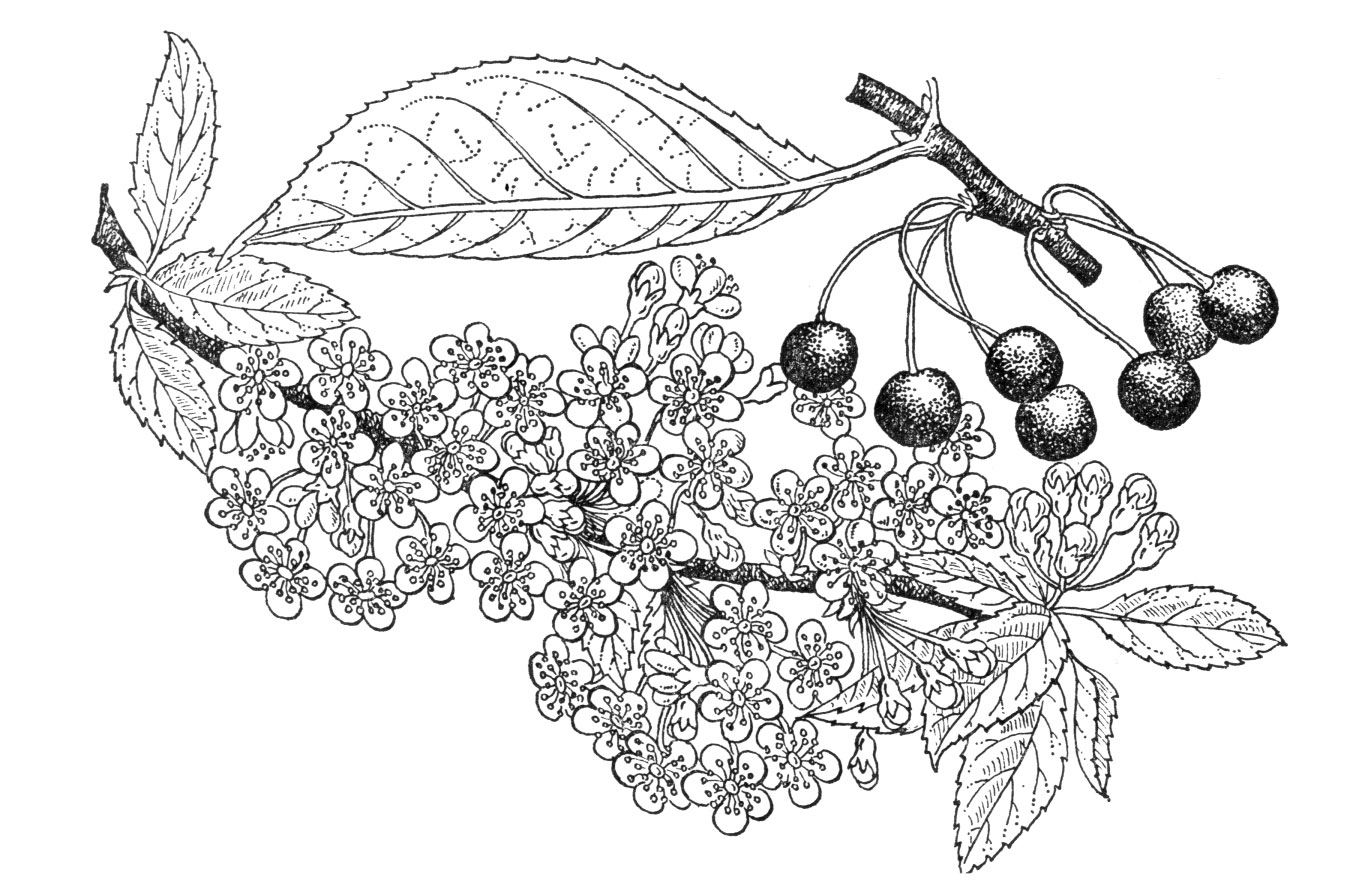 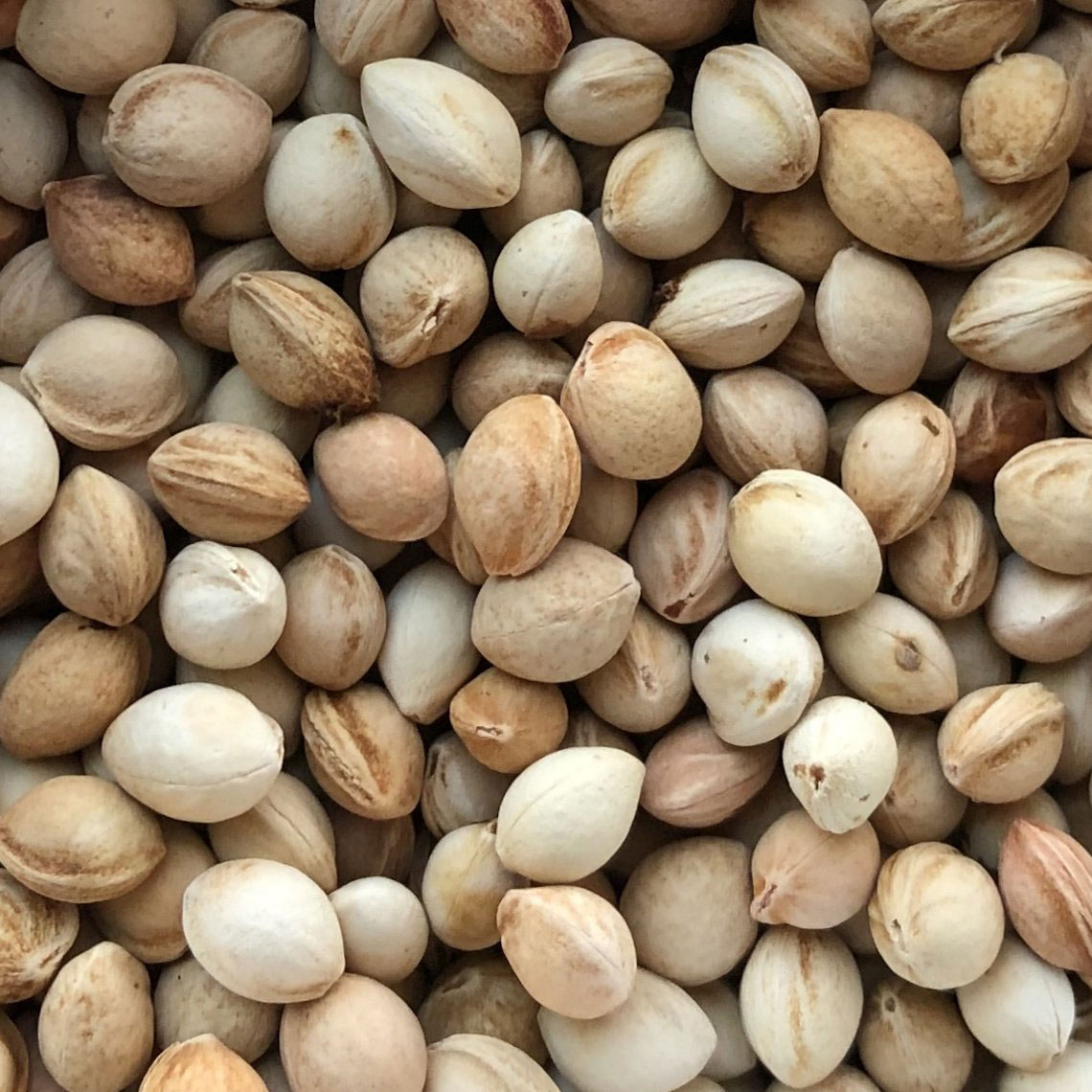 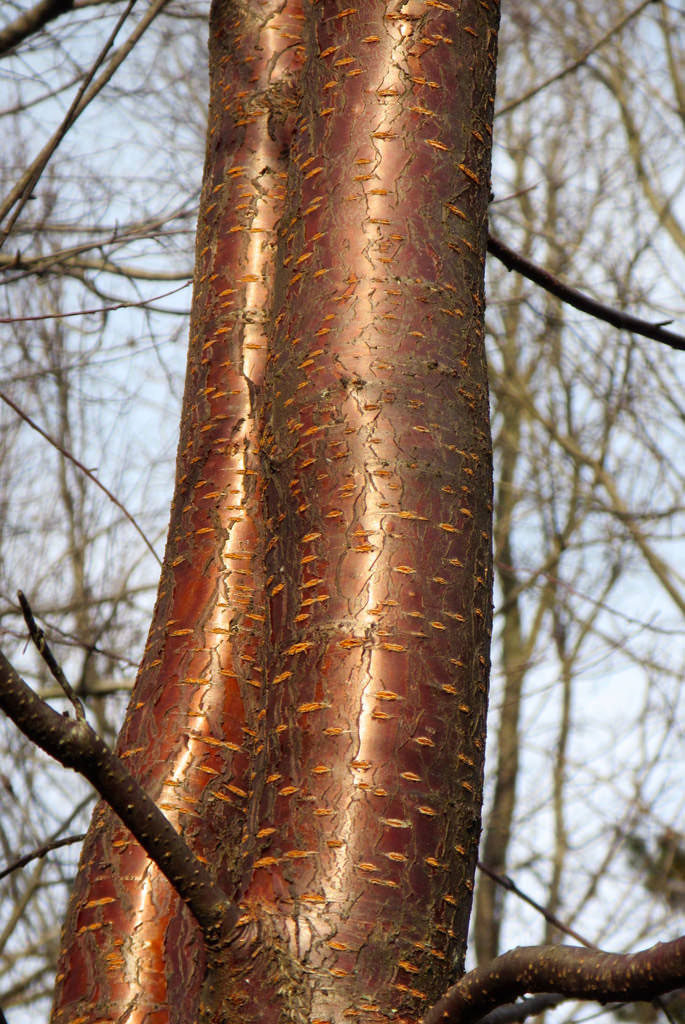 The bark on young trees is thin, smooth, shiny, and dark reddish-brown with numerous conspicuous, long, horizontal, pore-like openings (lenticels). The lenticels are widely-spaced, raised, warty, and orange. As the tree ages the bark turns gray. On mature trees the bark is rough and sometimes peels in horizontal strips, and the lenticels are rougher and darker. The inner bark is slightly aromatic and very bitter. The large lenticels show orange when rubbed.

The twigs are very slender, hairless, shiny, and red or reddish-brown, with tiny, orange, dot-like lenticels. They are covered with a grayish skin at first but that quickly wears off. They have brown pith and a disagreeable bitter almond taste. The leaf scars are half-round to elliptical. They have 3 bundle scars.

Lateral buds are small, 1 ⁄16 inches to ⅛ inches long, rounded, and reddish-brown. They diverge slightly from the twig. The terminal bud is similar and appears with a cluster of two or more lateral buds at the end of the twig.

The wood is coarse-grained, soft and light. It is not used commercially. The gum is edible.

Leaves are deciduous, alternate, and clustered at the ends of the twigs. They are on ⅜ -¾ inches long, hairless leaf stalks (petioles). The petioles often have one to three, more often two, small, red, wart-like swellings (glands) near the tip where the petiole meets the blade. The leaf blades are lance-shaped, 1¾ — 4¾ inches long, and ⅝ – 2 inches wide, 2 to 3 times longer than wide. They are broadly angled or rounded at the base and taper to a long point at the tip with concave sides along the tip. The upper surface is shiny, hairless and dark yellowish-green. The lower surface is paler and usually hairless, sometimes hairy along the main veins at first, becoming hairless. The margins are finely and irregularly toothed all the way to the base with sharp or rounded, forward pointing teeth. There is a small red or yellow gland at the tip of each tooth near the sinus. In autumn the leaves turn yellow.

Inflorescence is 2 to 5, sometimes 6 or 7, flowers in a stalk less umbrella-shaped (umbel-like) or flat-topped cluster (corymb) at the end of a short, 1 ⁄32 – 5 ⁄16 inches long, branch-like base (fascicle). The clusters appear at the ends of current year twigs and at the axils of previous year branchlets. Each flower is on a hairless, ⅜ -¾ inches long flower stalk (pedicel). Each pedicel is subtended by a minute, modified leaves (bracts). The flowers open in early May to mid-June when the leaves are about half size.

Each flower is about ½ inches in diameter. There are 5 sepals, 5 petals, 10 to 30 stamens, and 1 style. The sepals are green, 1 ⁄32 – ⅛ inches long, untoothed, hairless, and bent backward. The petals are white, ⅛ – ¼ inches long and conspicuously narrowed at the base (clawed). The claw is about 1 ⁄32 inches long. The expanded portion of the petal is elliptic, inversely egg-shaped, or almost circular. The stamens have white filaments and yellow anthers.

Fertile flowers are followed by fleshy, one-seeded, spherical or ellipse-shaped drupes that are about ¼ – ⅜ inches in diameter. It is green at first, turning bright red, shiny, and very sour when it matures in early July to late Mid-August. They are arranged in groups of 2 to 6. The seed is not flattened. Seeds are 0.15 to 0.24 inch (4-6 mm) in diameter with a thick seed coat. There are 13,600 to 22,700 seeds per pound.