Trending
You are at:Home»Herbs and Spices»Facts and benefits of Prickly Ash 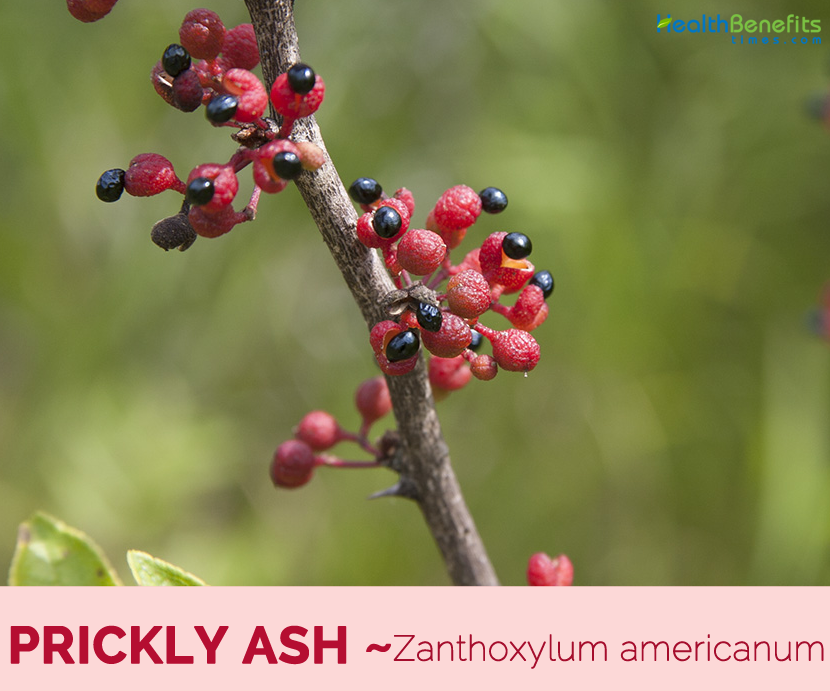 Prickly Ash scientifically known as Zanthoxylum americanum is a shrub or small deciduous aromatic tree, of the Rutaceae (citrus) family.  The plant is native to central and eastern portions of the United States and Canada. It is the northernmost New World species in the Citrus family, and is part of the same genus as Sichuan pepper. Other common names of prickly ash are Common Pricklyash, Northern Prickly-ash, Toothache Tree, Yellow Wood, Suterberry, chuan jiao, Toothache Bark, Pepper Wood and Suterberry. Genus name comes from the Greek words xanthos meaning yellow and xylon meaning wood for the color of the heartwood of some species.

All parts of this plant (leaves, flowers, fruit, bark and roots) are aromatic (lemony fragrance). Sometimes commonly called toothache tree because Native Americans chewed the bark or fruits (producing a numbing effect) for relief from toothache pain. Native Americans also prepared a variety of medicinal decoctions from the bark and roots for treatment of such problems and fever, coughs, gonorrhea, rheumatism and external wounds.

Prickly Ash is a small aromatic, perennial tree or shrub that grows about 10 meters (33 ft.) tall with a diameter of 15 cm (6 in). Plant is found growing along upland woodlands, bottomland woodlands, savannas, wooded ravines, thinly wooded bluffs, edges of shady seeps, stream banks in wooded areas, thickets, pastures, and fence rows. It prefers different types of soil including those that contain loam, clay-loam, and rocky material. Bark is gray to brown and fairly smooth, although on old large shrubs it can become shallowly furrowed with a wrinkled appearance. The branches are dark brown and armed with 8 to 13 mm-long prickles along the branches, twigs and shoots; these spines are somewhat flattened and curved. When broken, the twigs have a strong odor reminiscent of crushed lemon peel. Twigs are light green initially, turning to reddish-brown in the autumn, then to brown. Buds are red and woolly and appear above the old leaf scars.

Leaves are alternate compound about 1 to 30 cm long develop along the twigs and young shoots; they are odd-pinnate with 5-11 leaflets. Individual leaflets are 1½-3¼ inch long and ½-1½ inch across; they are lanceolate-oblong to ovate-oblong with margins that are smooth to crenulate (fine rounded teeth). The upper surface of mature leaflets is medium green, minutely glandular, and glabrous, while the lower surface is pale green and short-pubescent to nearly glabrous; in the latter case, fine hairs are restricted to the major veins. Newly emerged leaflets are more hairy than mature leaflets. The lateral leaflets are sessile or nearly so, while the terminal leaflets have slender petiolules (basal stalklets) that are less than ½” long. The light green petioles (basal stalks) and rachises of the compound leaves are hairy while young, but become more glabrous with age; they have scattered small prickles along their undersides. The dark green and lustrous leaves are dotted with translucent glands.

Female flowers give way to clusters of berry-like follicles about 0.5 to 0.6 cm that are ovoid-globoid in shape with a pitted surface (follicles) which mature in late summer. As the follicles mature, they change from green to red to brown, eventually splitting open to expose shiny black seeds with oily surfaces. Each follicle contains 1-2 seeds. Both the crushed foliage and fruits are highly aromatic, somewhat resembling the fragrance of lemon peels. Fruits may be the best ornamental feature. All parts of this plant (leaves, flowers, fruit, bark and roots) are aromatic. Native Americans prepared a variety of medicinal decoctions from the bark and roots for treatment of fever, coughs, gonorrhea, rheumatism and external wounds. The wood is not commercially valuable, but oil extracts from the bark have been used in traditional and alternative medicine, and have been studied for antifungal and cytotoxic properties.

One of the foundational healing uses of prickly ash bark is to improve circulation. Through increasing the flow of oxygen and nutrient-rich blood through the body, while at the same time cleansing, it is a beneficial herb for the heart and circulatory system. With the presence of a stronger flow of blood, it can improve healing, where nutrients and oxygen are needed. By removing toxins and warming, it can aid rheumatism and aching joints. It can also be used to treat varicose veins.

The overall impacts of this herb, stimulating tissue, promoting natural detoxification, and warming and energizing fluids and entire bodily systems, is to encourage the body to return to balance and well-being. Digestive issues, from gas to stomach pains, are relieved. Skin conditions, from acne to eczema, can improve with the elimination of toxins. Use of prickly ash bark is also good for the liver.

Prickly Ash Bark is considered a diaphoretic that increases perspiration and reduces intermittent fever. This action also helps to rid the body of toxins through the skin in the sweating process.

Side Effects of Prickly Ash Bark

Common side effects for prickly ash bark include nausea or vomiting, according to “The Essential Herb-Drug-Vitamin Interaction Guide,” by George T. Grossberg and Barry Fox. Prickly ash also may irritate the gastrointestinal tract, which can worsen infectious or inflammatory gastrointestinal ailments.

Using prickly ash can cause photosensitivity, meaning that it makes your skin sensitive to sunlight, according to Grossberg and Fox.

It’s possible to have an allergic reaction to prickly ash, advises the “Handbook of Medicinal Herbs,” by James A. Duke. If you experience one, you should quit using the supplement immediately and seek medical attention. Other names for this tree include angelica tree, suterberry, pepperwood, wild orange and Hercules’ club. Northern and southern prickly ash plants are similar, with the southern variety growing taller than the northern, according to Purdue University in Indiana. Prickly ash is part of the Rutaceae, or rue family, which also includes the kumquat, according to the U.S. Department of Agriculture.

Prickly ash can cause low blood pressure, technically called hypotension. You also increase risk of bleeding when you use prickly ash along with herbs that affect platelet aggregation, or the ability of blood to clot, according to Grossberg and Fox. Bleeding and bruising risk is raised when you take prickly ash with certain drugs as well, such as warfarin, heparin, tinzaparin and aspirin.

Prickly ash may interfere with your ability to absorb drugs meant to replenish your iron stores or hemoglobin, according to Grossberg and Fox. Examples include iron-dextran complex, polysaccharide-iron complex, ferric gluconate and ferrous sulfate.