Trending
You are at:Home»Herbs and Spices»Facts about Prickly Asparagus
Prickly Asparagus scientifically known as Asparagus aphyllus is a much-branched, perennial plant with stems that become more or less woody, at least at the base. The plant is native throughout the Mediterranean region and eastwards to Saudi Arabia. Some of the popular common names of the plant are Mediterranean Asparagus, Prickly Asparagus, Spiny Asparagus, Green-stemmed Asparagus, Israel wild asparagus and Thorny asparagus. The name for the genus originates from the original Greek word’ asparagos’ that was given to the cultivated asparagus. The specific epithet means without leaves as the pseudo leaves of this plant are actually considered to be flattened leaf like structures. The plant is harvested from the wild for local use as a food. Traditionally it was eaten during Lent in Greece.

The plant has small, thin, green, aciculate leaves. Flowers are small, yellowish-green, axillary, in groups of 3 to 6, short compedicelo. The male flowers have six stamens erect and robust with yellow anthers. The female flowers have a short stigma with a slightly swollen style. Flowering normally takes place from September, October and November. Flowers are followed by spherical, small and hard, 7-8 mm berries in maturation with 1 to 3 seeds.Fruits are initially green turning to reddish and finally black as they mature. 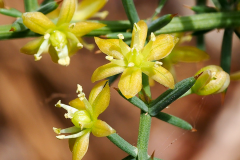 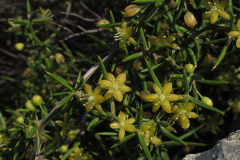 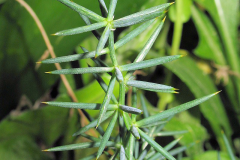 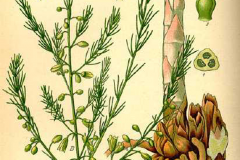 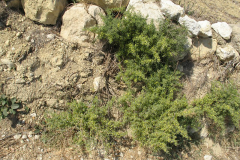 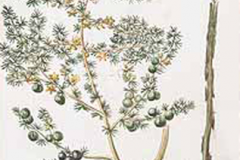 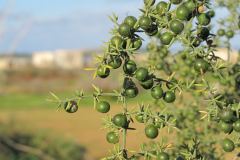 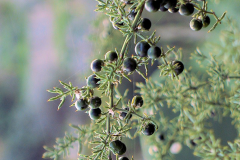 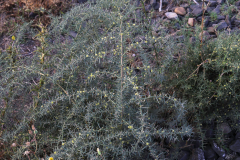 Culpeper described both types of asparagus as being under the influence of Jupiter: “The young Bud or branches boiled in one ordinary broth, makes the Belly soluble and open, and boiled in white Wine, provokes urine being stopped, and is good against the Strangury, or difficulty of making water. It expels the gravel and stone out of the Kidneys, and helps pains in the Reins: And boiled in white Wine or Vinegar it is prevalent for them that have their Arteries loosened, or are troubled with the Hip-Gout, or Sciatica.The Decoction of the Roots boiled in Wine and taken is good to clear the sight,and being held in the Mouth eases the Toothache: And being taken fasting several mornings together stirs up bodily lust in Man or Woman (whatsoever some have written to the contrary.) The Garden Asparagus nourishes more than the wild; yet hath it the same effects in all the aforementioned Diseases. The decoction of the Roots in white Wine, and the Back and Belly bathed therewith,or kneeling or lying down in the same, or sitting therein as a Bath, hath been found effectual against pains that happen to the lower parts of the Body; and no less effectual against stiff and benumbed Sinews, or those that are shrunk by Cramps, and Convulsions, and helps the Sciatica.”