Trending
You are at:Home»Herbs and Spices»Traditional uses and benefits of Purple Bauhinia 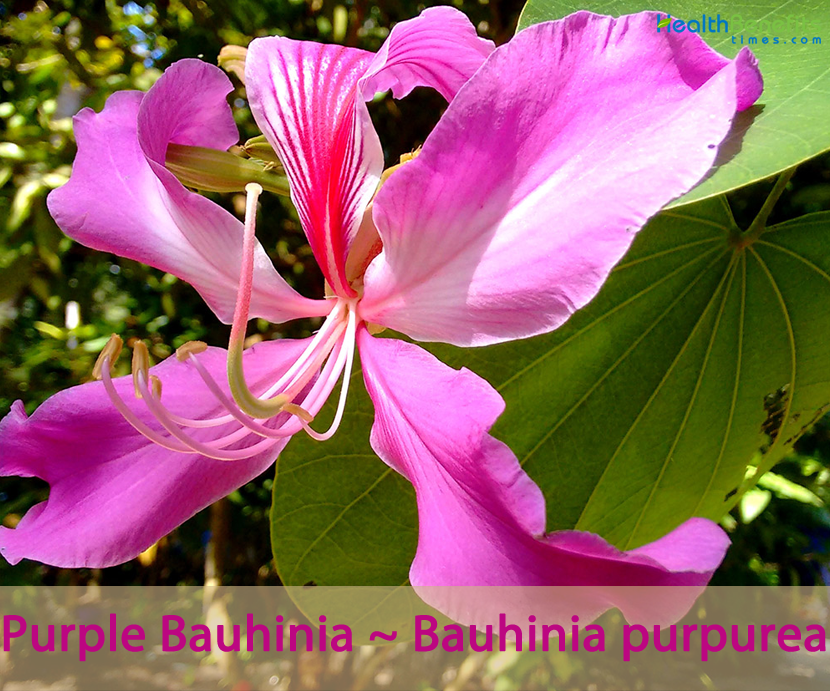 The genus name, Bauhinia was named after the Bauhin brothers Jean (1541-1613) and Gaspard (1560-1624), Swiss-French botanists. The two lobes of the leaf exemplify the two brothers. The specific epithet purpurea is from the Latin word purpura referring to the purple color of the flowers. The young leaves and flowers are eaten as a side dish with rice, or used to flavor meat and fish. Sometimes the seeds are edible. The bark is used to make rope and stems of smaller lianescent species are used for binding. Some bauhinia species are used for binding. Some bauhinia species reputed for their fiber application are used medicinally as well.

Purple Bauhinia is a small to medium-sized deciduous evergreen, fast-growing shrub or tree with a round, symmetrical, moderate dense crown, young branches becoming glabrous or nearly so (glabrescent). The plant normally grows about 7.6 m in height and 17.8 cm in diameter. It can reach a height of 4.6 m in less than 2 years. It is found growing in evergreen lowland rainforests, mountain forests, savanna, scrublands, dry deciduous forests and swamp forests. It can also grow in disturbed areas, secondary forest, along roadsides and in gardens, parks, and disturbed sites near urban areas. It grows on a variety of sandy, loamy and gravelly soils in full sun in fertile, moisture-retentive but well-drained soils. It demands plenty of light and requires good drainage. However, it’s adaptable to any free-draining garden soils. Trunk is woody with pale grey to brown colored bark that is fairly smooth to slightly fissured and scaly. The twigs are slender, light green, slightly hairy, and angled, becoming brownish grey. The heart-wood is brown, hard and durable.

Leaves are simple, alternate, base rounded to shallow-cordate, up to 4.5–11 cm long and 4.5–10 cm wide, deeply 2-lobed at apex, margin entire and the surfaces smooth and glabrous, and 9- 11 nerved at base. The apex lobes are rounded or obtuse to sub-acute, minute stipules 1-2 mm long, petioles puberulous to glabrous, 2.5-3.5 cm long. Leaf blades are 4.5-11 cm long. 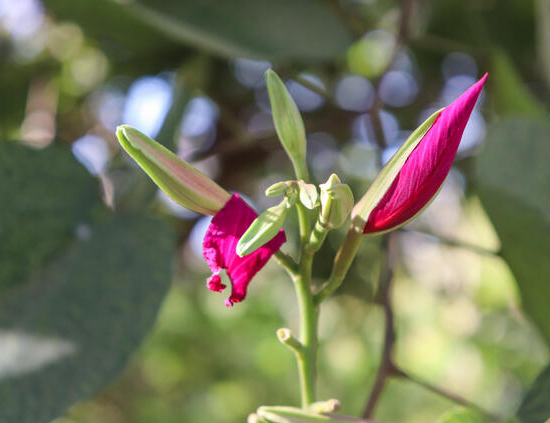 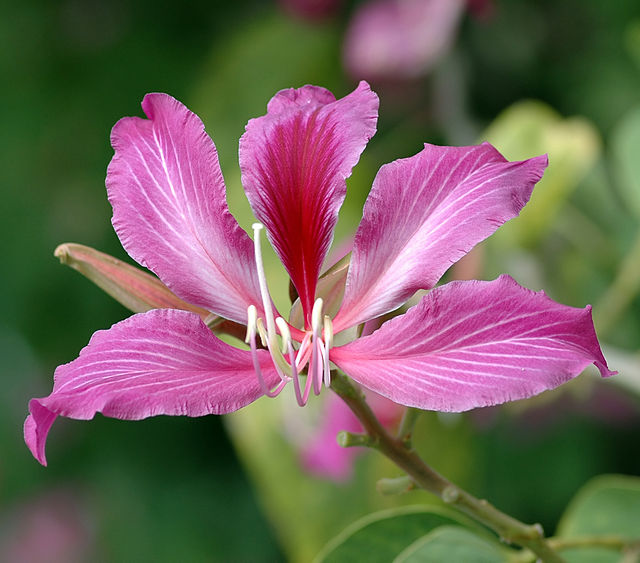 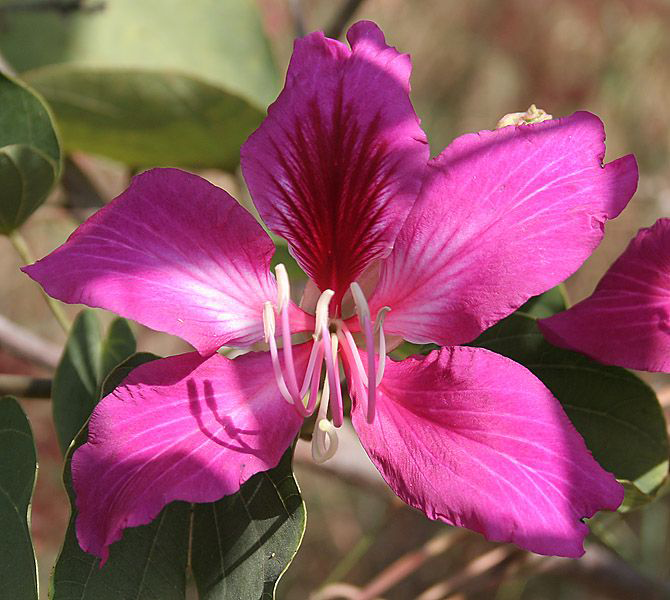 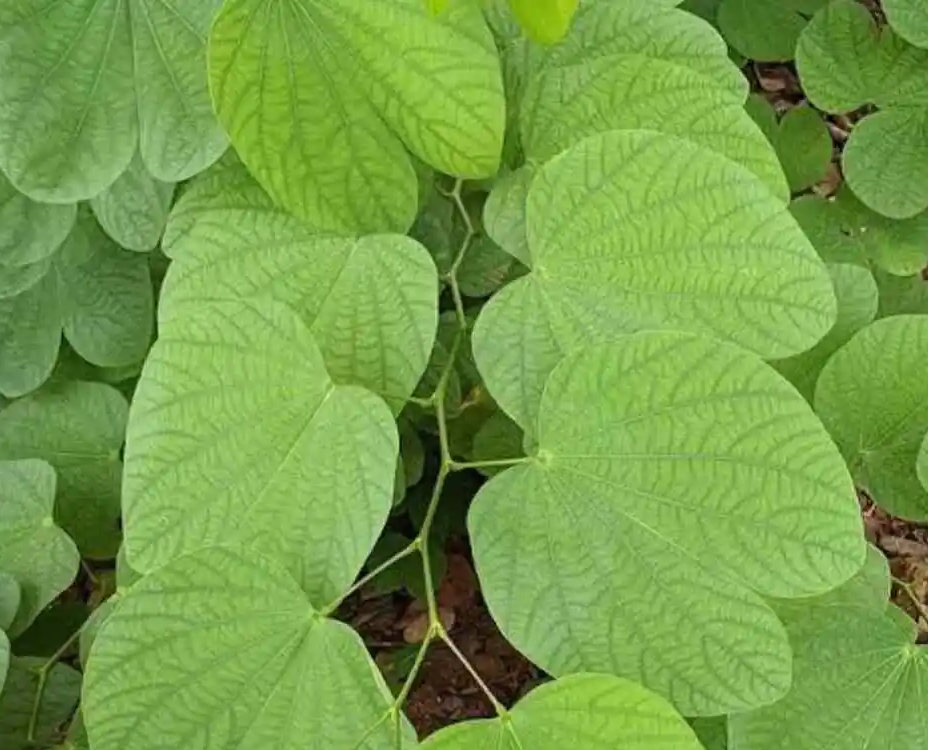 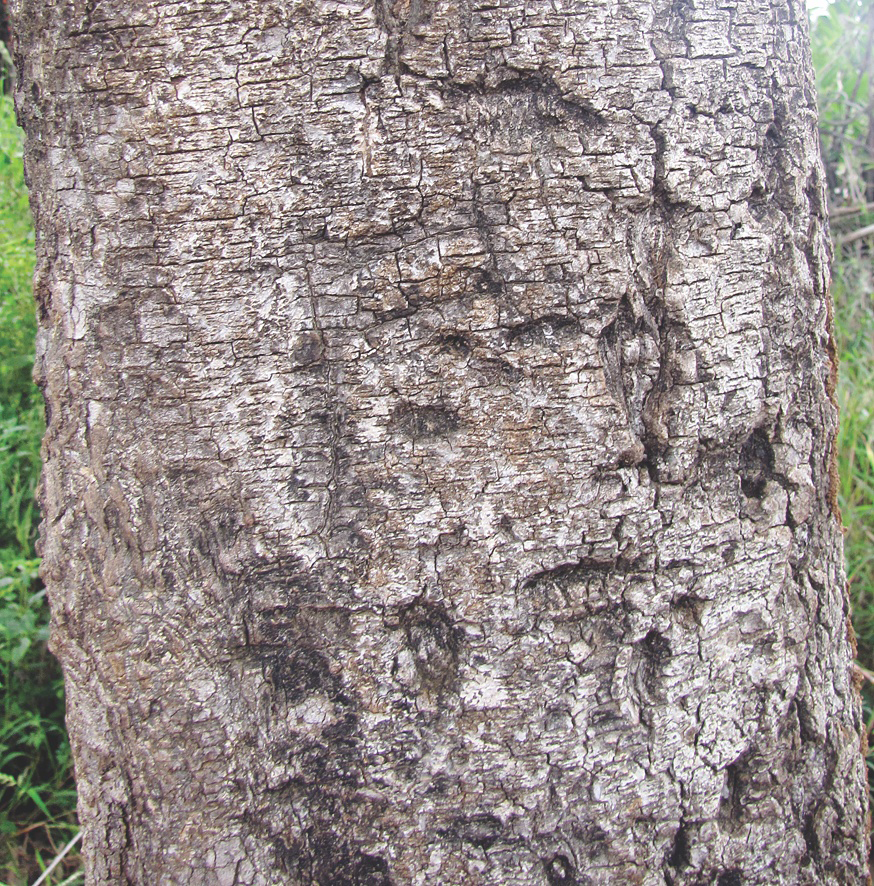 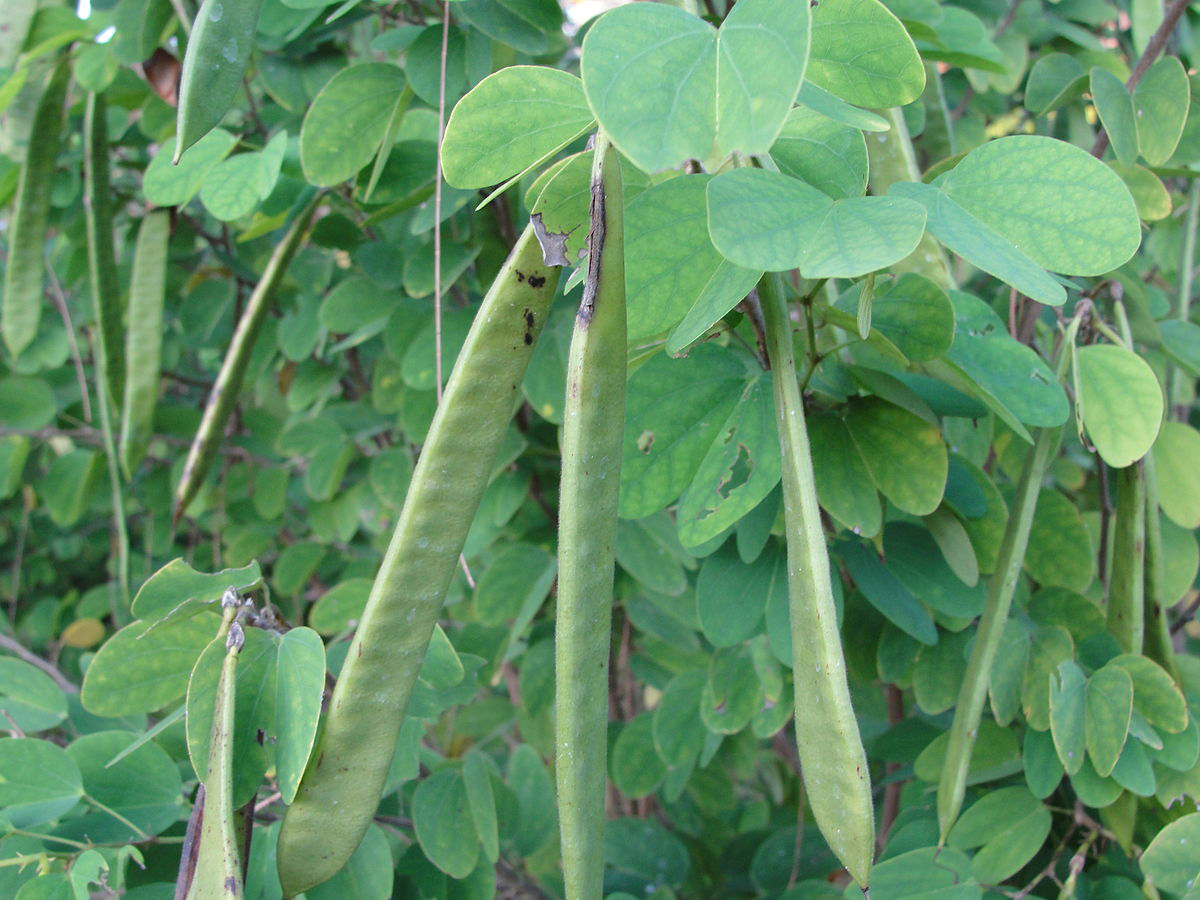 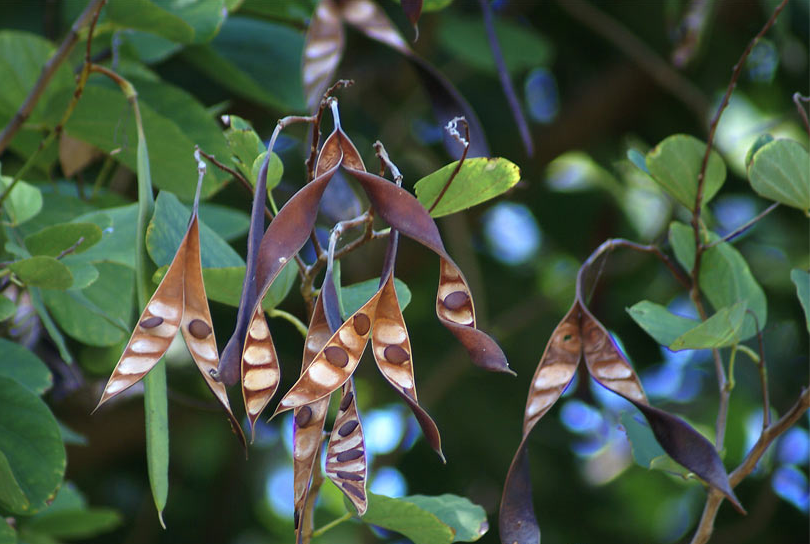 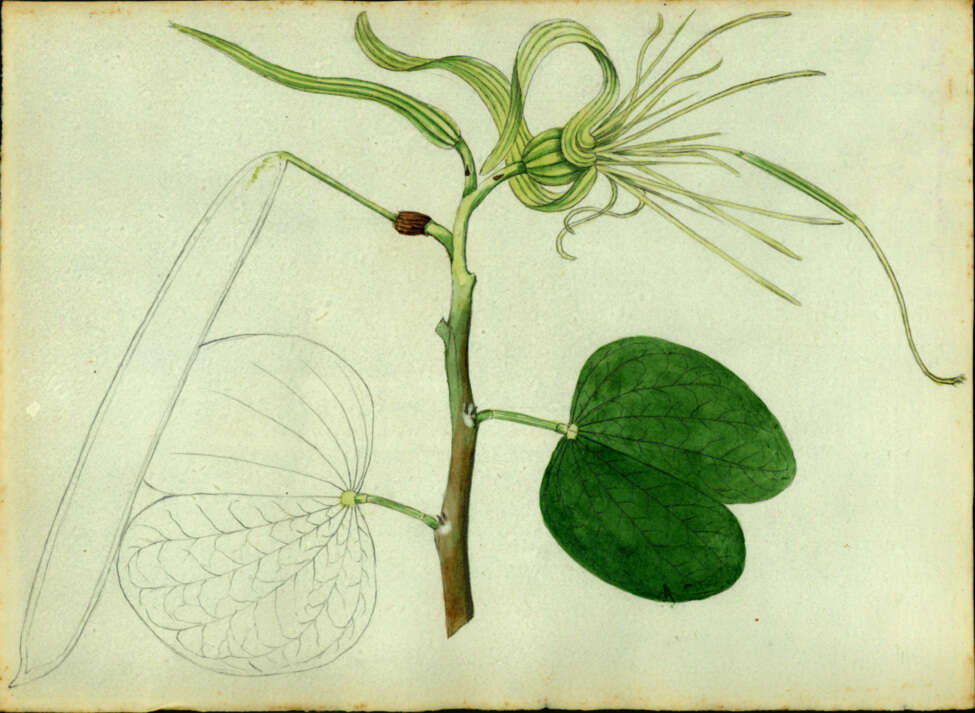 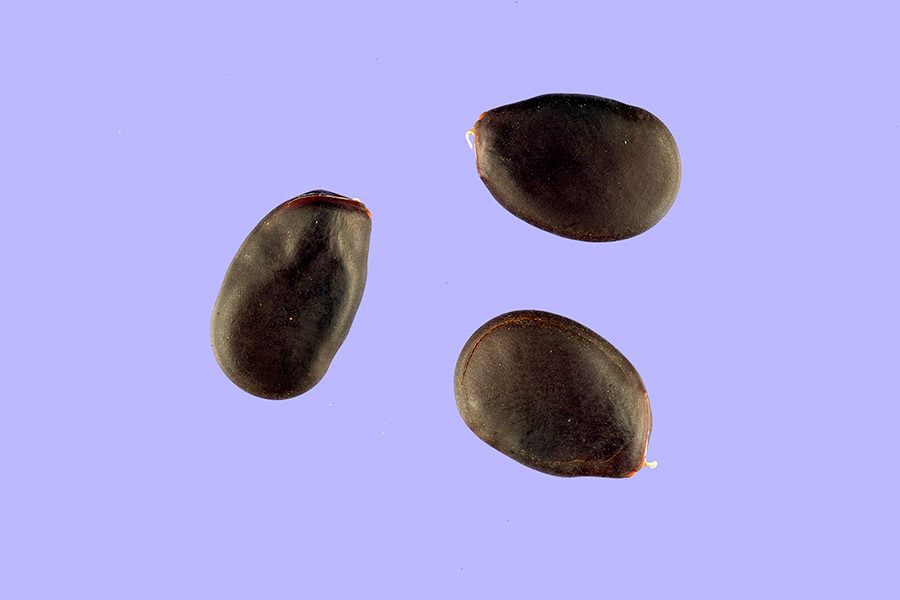 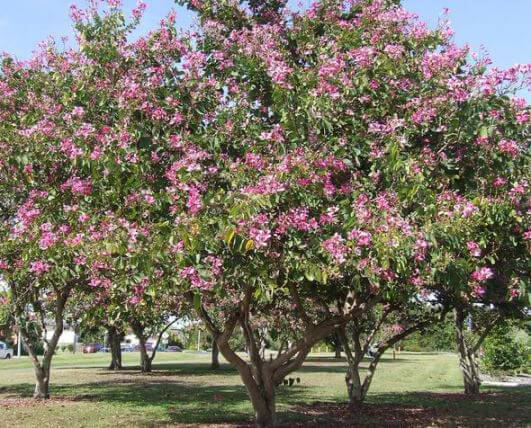 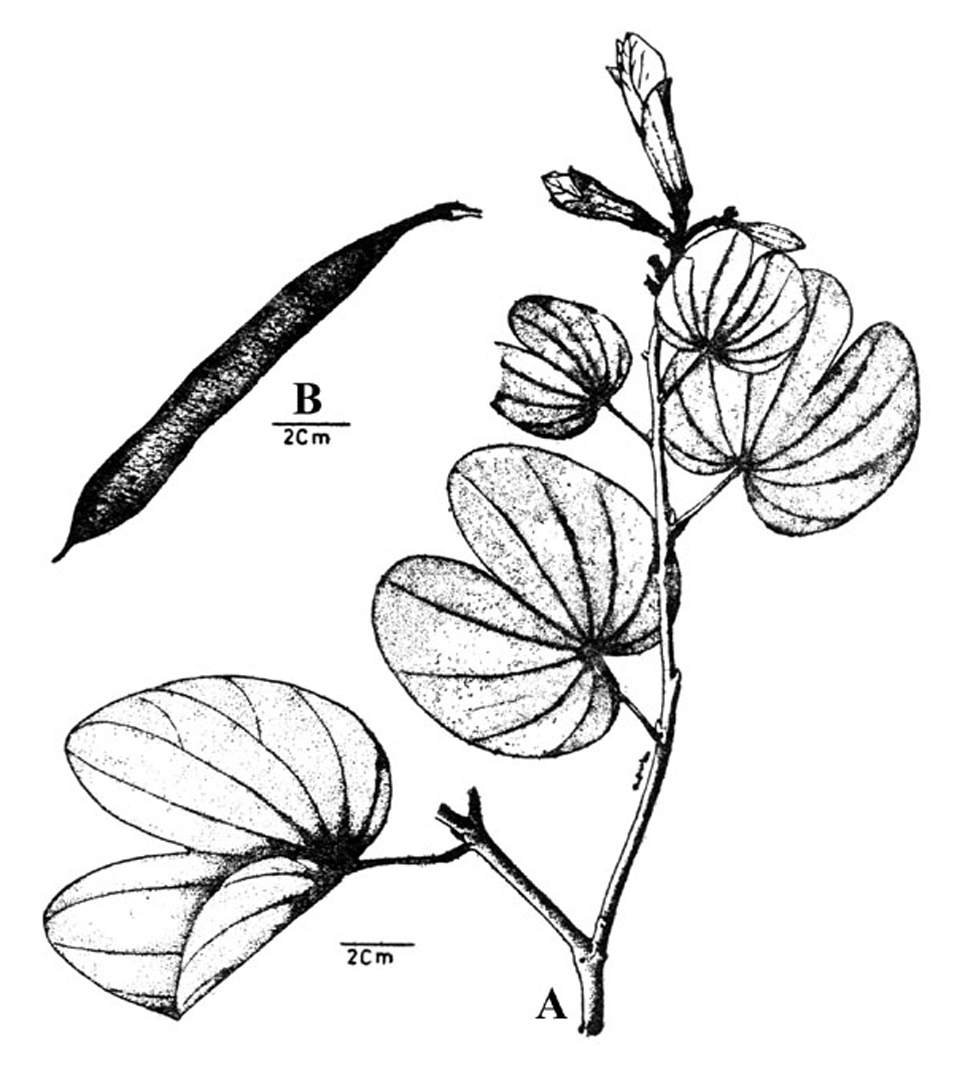 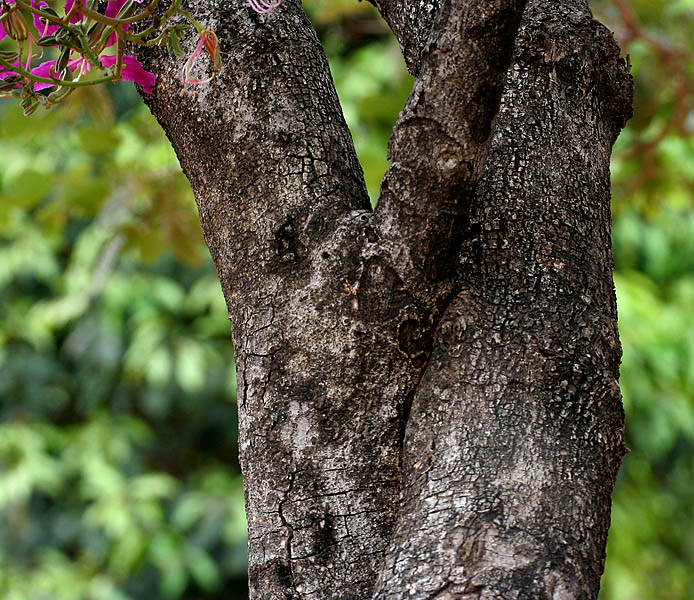 Inflorescence a 6-10-flowered raceme in terminal panicles; flowers numerous, hypanthium, turbinate, purple to nearly white or at least purple marked, the flower buds clavate (club-shaped), velvety, ca 3-4 cm long prior to anthesis; fertile stamens 3 or 4, the anthers ca 6 mm long, versatile; ovary superior; corolla of 5 narrow petals and constricted at base, oblanceolate, 3-5 cm long, claws 5-10 mm long, the banner purple striate, 7 mm wide.  Calyx is tubular, erupted by corolla along one side when flower fully expanding; calyx split into 2 valves with 5 teeth. In fall, before the leaves drop, Orchid-Tree is festooned with many showy and delightfully fragrant, five-inch-wide blossoms, the narrow purple, pink, and lavender petals arranged to closely resemble an orchid. These flowers appear on the trees from September through November and are a beautiful sight to see, creating a vivid splash of color in the autumn landscape.

Fertile flowers are followed by 12-inch-long, slender, brown, flat seed pods which usually persist on the tree throughout the winter. Fruit is brown, strap-shaped, not separate, elongated dehiscent pods, 15- 30 cm long, up to 1.5-2.5 cm wide, containing 10-15- shiny-brown, glabrous, dehiscent, rounded, flat seeds that are 13-16 mm in diameter and 1-2mm thick; twists as opens. Seed forms very rapidly and trees in flower may already show numerous green pods. While most pods will open in the drier winter weather some may persist through to the next flowering season. Fruit mature in spring and summer. Fruit does not attract wildlife.

Fodder: In an experiment in Nepal, it was found increase milk production in lactating buffaloes. Leaves make good fodder and are greedily eaten by sheep, goats and cattle with protein content estimated at 12.6%.

Tannin or dyestuff: Bark of various bauhinia species consist of considerable amounts of tannin widely used in leather industry in India. Medicinal uses of bark can be largely attributed to the presence of these tannins. Flavonoids are a common feature of Bauhinia.

Medicine: Throughout South-East Asia various parts of numerous Bauhinia species are used in poulticing to reduce swelling and bruises, and to ripen ulcerations and boils. Decoctions of various plant parts are taken internally as a febrifugal, anti-diarrheal and anti-dysenteric remedy and also it is used as an astringent. In India, the bark is extensively applied in glandular diseases and as a poison antidote while the leaves are administered as cough medicine. The flowers are said to be laxative and used in curries and pickles.

Timber: The wood is used for agricultural implements.

Other products: Apart from being an ornamental it is well known as the source of Bauhinia purpurea agglutin (BPA), a lectin with an affinity to galactose and lactose, widely applied in biochemical, immunochemical and histo-chemical studies.

Erosion control: Bauhinia purpurea with a deep root system and high root: shoot ratio may be a suitable species for slope stabilization.

Ornamental: B. purpurea is extensively planted as an ornamental tree in parks, gardens and homesteads, and along avenues for its showy fragrant, purple flowers. The weak wood is susceptible to breakage in storms; the abundant seedlings, which may germinate in the landscape; and the litter problem, created by the falling leaves, flowers, and seedpods