Trending
You are at:Home»Herbs and Spices»Facts and benefits of Quaking Aspen 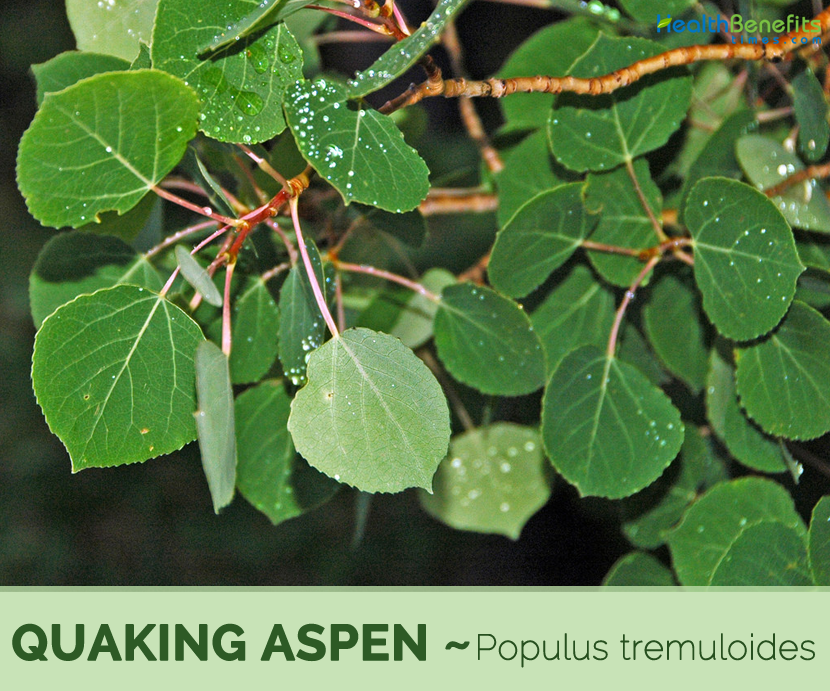 Populus tremuloides commonly known as quaking aspen, American Aspen, Poplar, Quaking aspen, White Poplar, trembling aspen, golden aspen, mountain aspen, popple, trembling poplar, popple and aspen is a deciduous tree native to cooler areas of North America, one of several species referred to by the common name Aspen. It has the widest geographical distribution of any North American tree, being indigenous to Alaska and most of Canada, the Pacific Northwest, New England, the Great Lakes and south in the Rockies to New Mexico and Arizona. Aspen (Populus tremuloides), is a member of the Salicaceae or willow family. The species often propagates through its roots to form large groves based on a single rhizome. Aspens are widely used in the timber industry to make pallets, crates, paper, pulpwood, and playgrounds. It is highly valuable for shipping purposes (i.e., crates, boxes, packing) because of its light weight and strength. It is widely preferred for making playgrounds because it does not splinter easily.

Quaking aspen is a small- to medium-sized, fast-growing, and short-lived tree that grows about 20–25 m (66–82 ft.) tall. It is found growing in a range of soils from shallow, rocky or clay soils to rich sandy ones. It grows best in rich porous soils with plenty of lime. Growth is much less on wet soils, on poor acid soils and on thin dry soils. Roots are relatively shallow and widely spreading.  Trunk is 20–80 cm (0.66–2.62 ft) in diameter and has comparatively smooth, colored greenish-white to gray bark, and is marked by thick black horizontal scars and prominent black knots.

Leaves on mature trees are nearly round, 4–8 centimeters (1.6–3.1 in) in diameter with small rounded teeth, and a 3–7 centimeters (1.2–2.8 in) long, flattened petiole. Young trees (including root sprouts) have much larger—10–20 centimeters (3.9–7.9 in) long—nearly triangular leaves. The leaves change from green to golden and sometimes bright red in the fall.

Flowers are catkins 4–6 centimeters (1.6–2.4 in) long, produced in early spring before the leaves; it is dioecious, with male and female catkins on different trees. Catkins are gray-green and not showy. Small drooping fruiting clusters follow the female flowers in late May. Fruits are 10-centimeter-long (3.9 in) pendulous string of 6-millimeter (0.24 in) capsules, each capsule containing about ten minute seeds surrounded in cottony fluff, which aids wind dispersal of the seeds when they are mature in early summer. Aspens are widely used in the timber industry to make pallets, crates, paper, pulpwood, and playgrounds. It is highly valuable for shipping purposes (i.e., crates, boxes, packing) because of its light weight and strength. It is widely preferred for making playgrounds because it does not splinter easily.

Quaking aspen is an important fiber source, especially for pulp, flake-board, and other composite products. Wood is light and soft with little shrinkage and is used for pallets, boxes, veneer, and plywood. Higher grades are used for other solid wood products, such as paneling, furniture components, and flooring. The wood characteristics make it useful in miscellaneous products, including excelsior, animal bedding, matchsticks, toys, beehives, tongue depressors, spoons, and ice cream sticks. It makes good playground structures because the surface does not splinter, although the wood warps and susceptible to decay.

Quaking aspen is appreciated for its white bark and brilliant fall color, particularly when clustered. The species been widely used in landscaping but is best in sites away from structures that might be damaged by the aggressive roots. The trees provide good visual screening and noise abatement.

Aspen stands are good firebreaks, often dropping crown fires in conifer stands to the ground when they reach aspens and even sometimes extinguishing the fire because of the small amount of flammable accumulation. They allow more ground water recharge than do conifer forests and they also play a significant role in protecting against soil erosion. They have been used in restoration of riparian habitats.

Young quaking aspen provides food and habitat for a variety of wildlife: black bear, deer, beaver, porcupine, elk, moose, ruffed grouse and many smaller birds and animals, including small mammals such as mice, voles, shrews, chipmunks, and rabbits. Bark, buds, new sprouts, twigs from the tops of fallen or logged trees, and fallen leaves all are wildlife foods.

Native Americans used Populus bark (including aspen) as a food source. They cut the inner bark into strips, dried and ground it into meal to be mixed with other starches for bread or mush. Catkins were eaten raw, and the cambium was eaten raw or in a soup.