Trending
You are at:Home»Herbs and Spices»Facts and benefits of Quassia 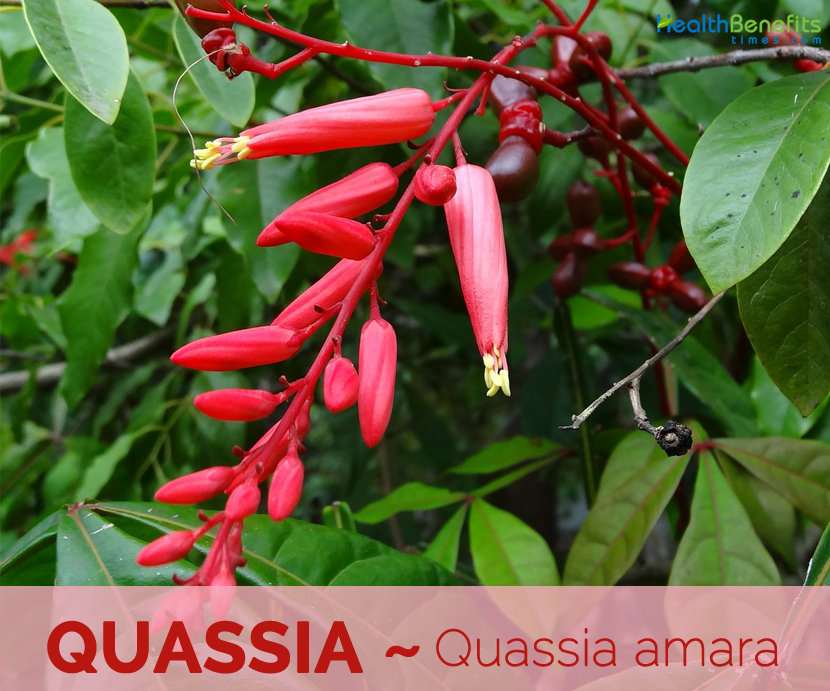 Quassia amara commonly known as Quassia, Bitter Quassia, Amargo, Bitter-ash, Bitter-wood, Jamaica Quassia, Bitter Bark, Quassia Bark and Quassia Wood is a small evergreen shrub or rarely a small tree native to Costa Rica, Nicaragua, Panama, Brazil, Peru, Venezuela, Suriname, Colombia, Argentina, French Guiana and Guyana. It is a member of the Simaroubaceae family. Linnaeus named it after the botanist who first described it, the former slave from Surinam, Kwasimukamba, also known as Graman Quacy. He was a healer who supposedly discovered the medicinal properties of its wood and used it as a secret remedy for the cure of malignant fevers endemic to Surinam.

Its species name, amara, is derived from the Spanish word amargo, which means “bitter.” The name fits since the bark of the tree contains quassin, a substance 50 times more bitter than quinine. In fact, it’s the bitterest naturally-occurring chemical known to exist. Although quassia bark is an ingredient in herbal bitters in moderate amounts, the presence of these highly bitter phytochemical makes infusions made with this herb very effective natural insecticide. It is the bark of the quassia amara tree that is used in herbal and homeopathic medicine. Generally the bark is sold in ground-up chips and used to produce tonic or tinctures. The tonics and tinctures are generally made by steeping the bark in cold water for extended periods of time. The tree’s resin is among the bitterest substances on earth, so it can also be used to flavor liqueurs, jams, and puddings. Fine shavings of quassia amara bark might also be used like hops to brew beer and ale.

There are two varieties of the quassia amara tree that are used and grown for medicinal purposes. The West Indian type can reach heights of 100 feet (30.5 meters), while the South American variety is smaller, usually around 18 feet (5.5 meters) tall. Both types of trees are deciduous, with smooth gray bark and small flowers that produce black, pea-shaped fruit. The trees are almost never eaten by insects because of the intensely bitter resin in the trees’ bark.

Quassia is a small evergreen shrub or rarely a small tree that grows about 3 m tall (rarely 8 m) tall. The plant is found growing in tropical forests or near bodies of water. Quassia cannot tolerate frost, but the plant is partially drought tolerant. It prefers a fertile, moist but well-drained soil in a partially shaded position. Bark is smooth, thin and dark brown or thick greyish brown transversed by reticulating lines. It is the bark of the quassia amara tree that is used in herbal and homeopathic medicine. The tonics and tinctures are generally made by steeping the bark in cold water for extended periods of time.

Leaves are compound and alternate, 15–25 cm long, pointed at the apex narrowed toward the base, and pinnate with 3-5 leaflets, the leaf rachis being winged. The leaflets are opposite, oblong, acuminate and uneven at the base.

Flowers are produced in a panicle 15–25 cm long. The flowers are small and pale yellowish green. The sepals are round to ovate, fused at the base and imbricate. There are 5 petals, 10 stamens and 5 carpels. The style is fused from bottom to top. Flowering takes place from October and November.  The fruit is a pea-sized drupe, which ripens from December to January. They are black, glossy, solitary, clavate and have a thin skin. Q. amara is used as insecticide, in traditional medicine and as additive in the food industry. Tree’s resin is among the bitterest substances on earth, so it can also be used to flavor liqueurs, jams, and puddings.

Traditional uses and benefits of Quassia