Trending
You are at:Home»Herbs and Spices»Traditional uses and benefits of Sacred Bamboo 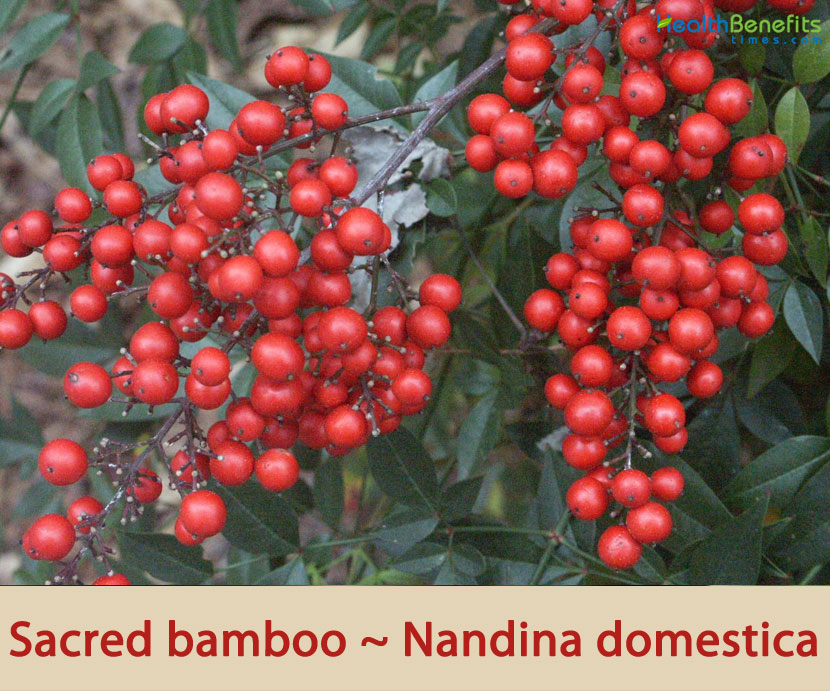 Nandina domestica commonly known as nandina, heavenly bamboo or sacred bamboo, is a species of flowering plant in the Berberidaceae (Barberry family). It is the only member of the monotypic genus Nandina Thunb. (Nandina). It is extensively grown in gardens as an ornamental plant since it has a number of cultivars that show bright-red fall foliage in the cool months with attractive new foliage growth in spring. The plant is native to Eastern Asia, occurring in India, Japan, and China. Occasionally it naturalized in some parts of central and northern New South Wales and sparingly naturalized in south-eastern Queensland. It also naturalized in large parts of south-eastern USA (i.e. Texas, Louisiana, Mississippi, Alabama, Florida, Georgia, South Carolina, North Carolina and Virginia). Nandina, Chinese-bamboo, Heavenly-bamboo, Sacred-bamboo, Southern heaven-bamboo, Sacred bamboo, Heavenly bamboo, Nanten, Japanese sacred bamboo and sacred Japanese bamboo are some of the popular common names of the plant.

Genus name ‘Nandina’ is the Latinized form of the Japanese name of this plant Nanten. Specific epithet ‘domestica’ means domesticated or ‘of the household’. Although it belongs to the Barberry family, it is commonly called heavenly bamboo because its erect, cane-like stems and compound leaves resemble bamboo. Since the word “bamboo” is included in these common names, people often conclude that it’s invasive & shouldn’t be planted. Sacred bamboo tends to occupy adjacent lands including certain forested areas of the southeastern United States and naturalize therein. It is now considered to be an invasive species in some southern states. Additionally, the berries of Nandina domestica have been related to toxicity in cedar waxwing birds. Although the plant is considered a popular ornamental shrub, the berries are toxic to birds, mainly towards the end of the winter when other food sources become scarce.

Sacred bamboo is an erect, evergreen or semi-evergreen, broadleaf, many stemmed woody shrub that is ornamentally grown for its interesting foliage and its often remarkable fruit display.  It is a graceful, fine-textured evergreen shrub, rather than a true bamboo.  The plant typically grows about 5 to 7 feet tall and 3 to 5 feet wide. It grows 12 to 24 inches per year, depending on conditions, including location, light, fertility and water. In St. Louis, it is semi-evergreen to deciduous, and typically grows shorter since the stems often will die to the ground in winter.

The plant is found growing in woodland, floodplains, forest edges, ravines and valleys in mountains and warmer parts, stream sides in montane forests, roadsides, and thickets. It is found in disturbed and undisturbed upland hardwood and upland mixed forests, riparian forests, slope woodlands, urban woodlands.  It rarely occurs in early successional communities, but can grow in full sun and along forest edges. The plant tolerates a wide range of soil characteristics but performs best in rich, moist, well-drained fertile soil and full sun, which encourages the best growth, foliage color, and fruit set. Plant this shrub in groups to get the best fruiting. Although it does best with consistent watering, sacred bamboo can tolerate some drought after it’s established.

Stubby branches whorled alternately up the stem and tightly stacked near terminals for a given year’s growth. The overlapping sheaths on the main stem give the appearance of bamboo (thus, the common name). Stem is fleshy and greenish gray near terminal, becoming woody barked and tan to brown with fissures towards the base. Wood is bright yellow colored.

Alternate, glossy leaves are occasionally deciduous in colder areas. The young leaves in spring are brightly colored pink to red before turning green. Old leaves turn red or purple again before falling. Its petiolate leaves are 50–100 cm long, compound (two or three pinnacles) with each leaflet, elliptical to ovate or lanceolate and sub sessile with entire margins, 2–10 cm long and 0.5–2 cm wide, with petioles swollen at their bases. Petiole bases clasp the stem.

The flowers appear from May to July and are pinkish white. Flowers are in terminal, or sometimes axillary, panicles 8 to 15 inches long with numerous perfect hermaphrodite flowers at the end of the branches. Flowers are ¼ to ½ inches across, bisexual, pinkish in bud, maturing to white, tri-merous, pedicellate, sepals many, arranged spirally. Petals are variable in number ranging from 2 to 6 and are bigger than sepals, without glands. Stamens 6, anthers longitudinally dehiscing, ovary superior, ellipsoid, ovules few, basal, style short, persistent in fruit, stigma. Flowers are fragrant. 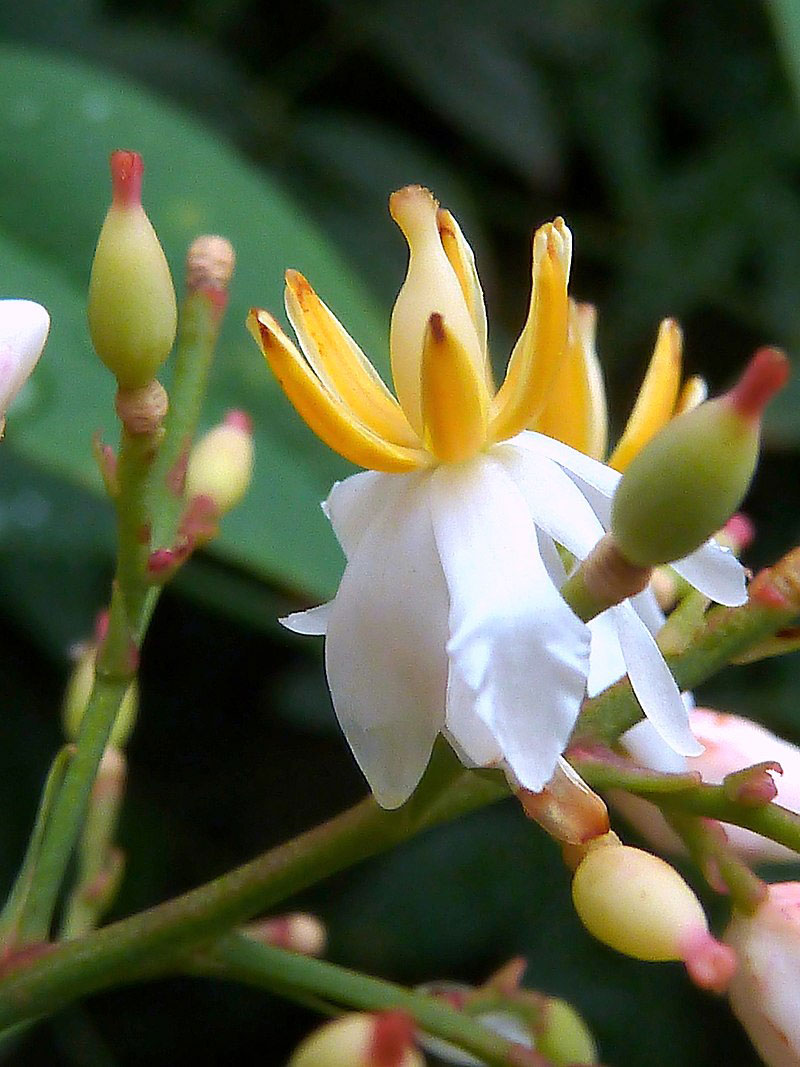 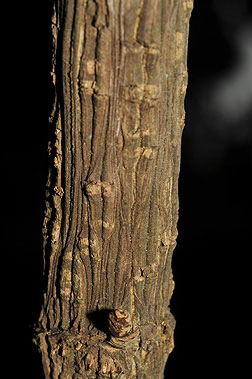 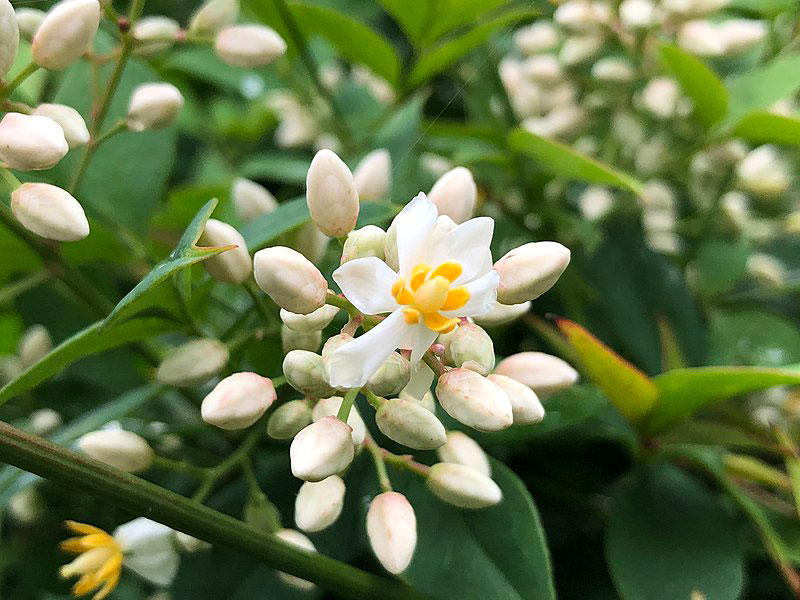 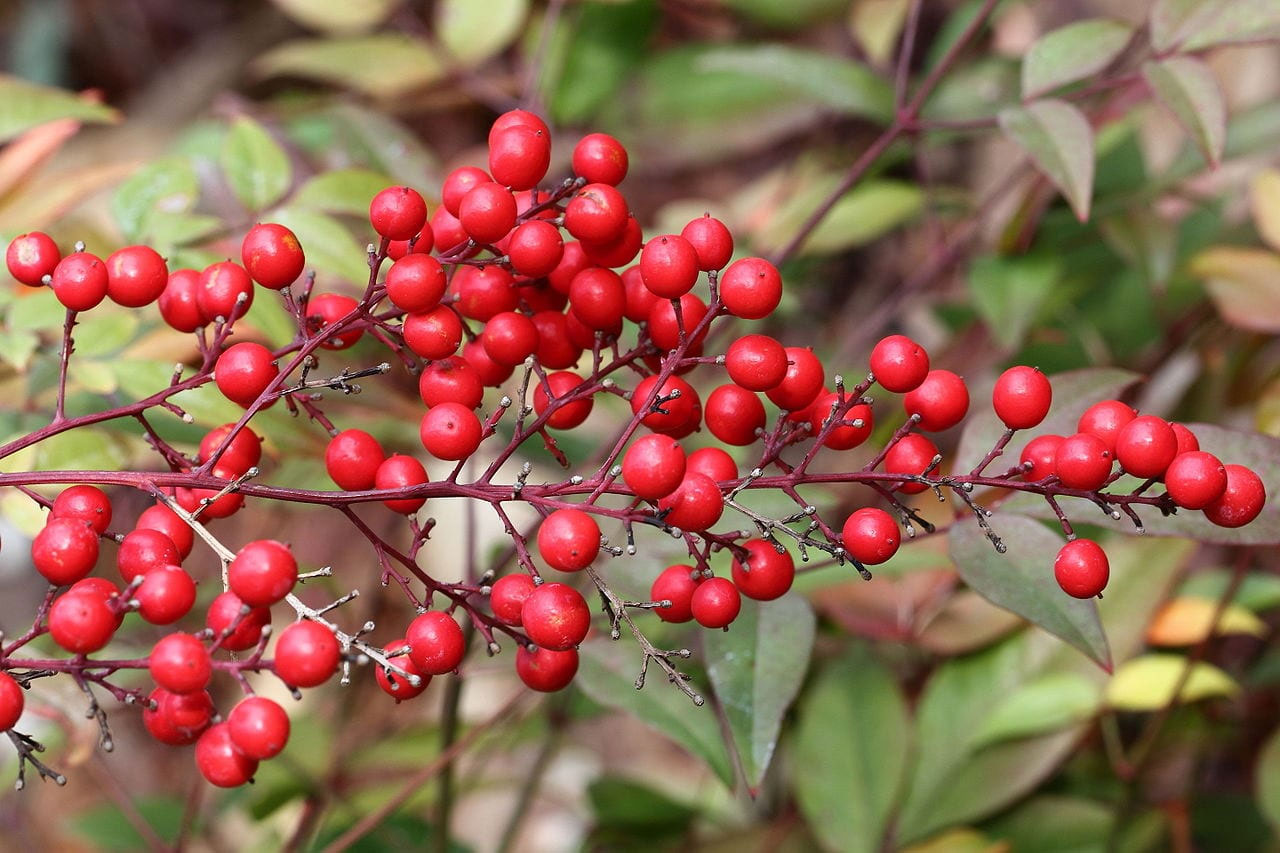 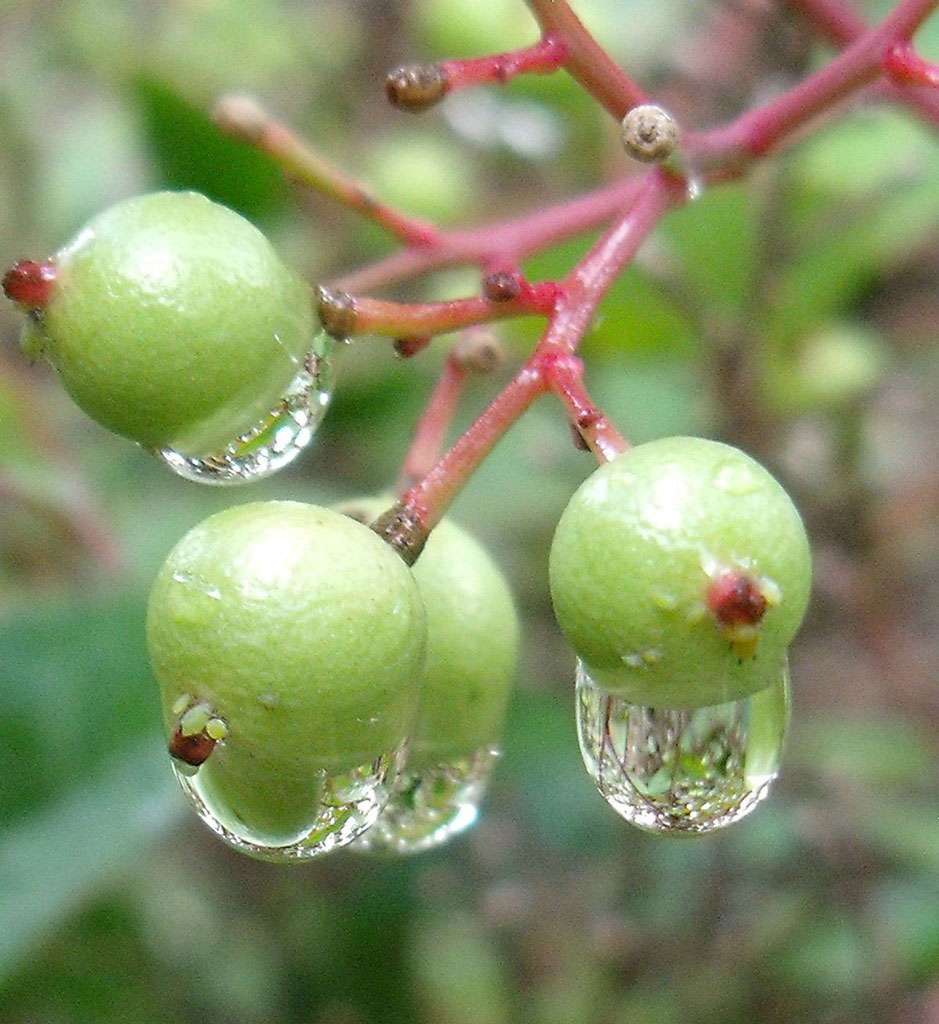 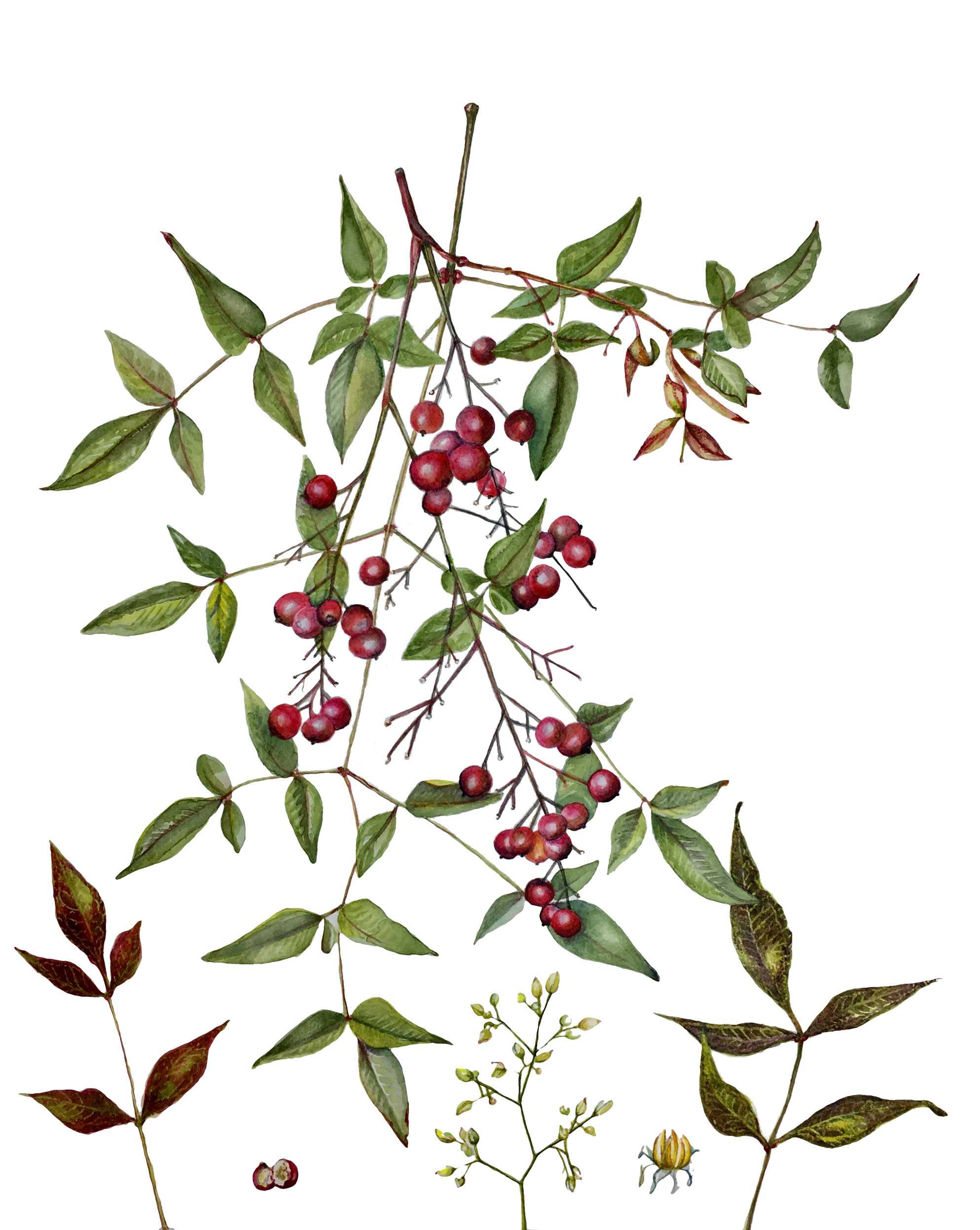 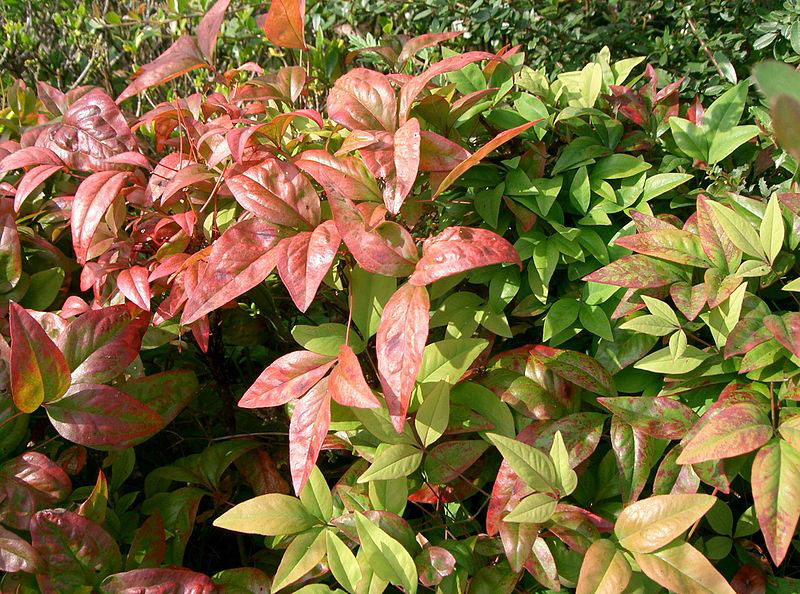 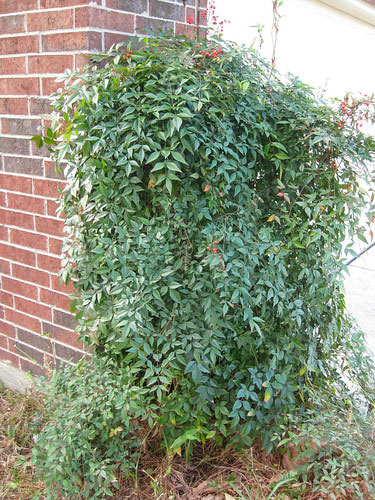 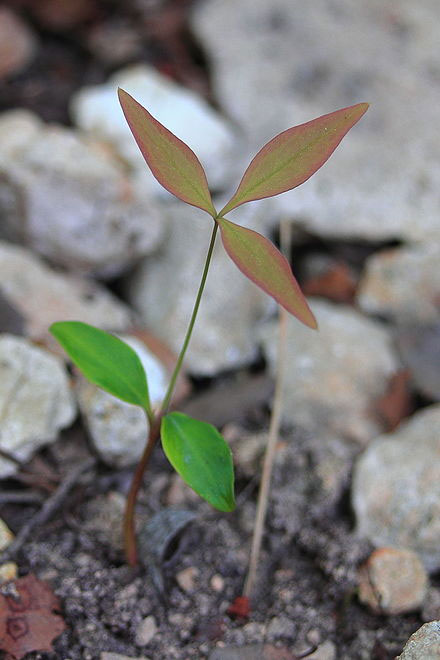 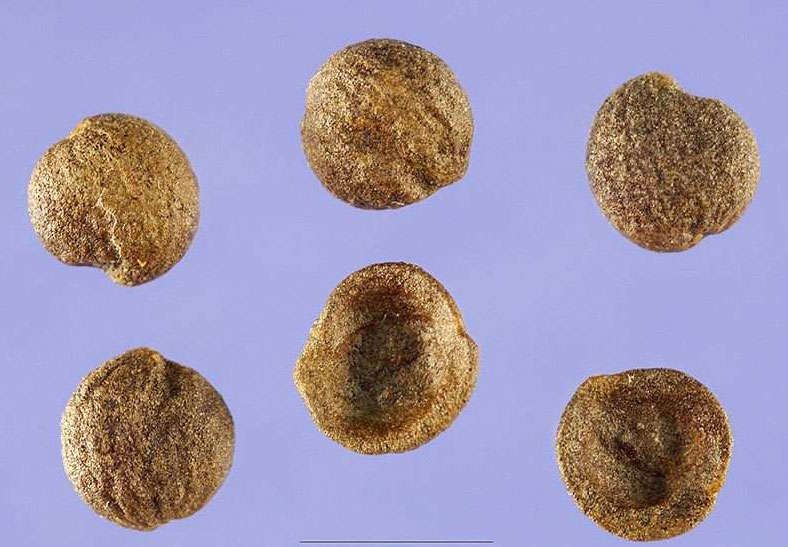 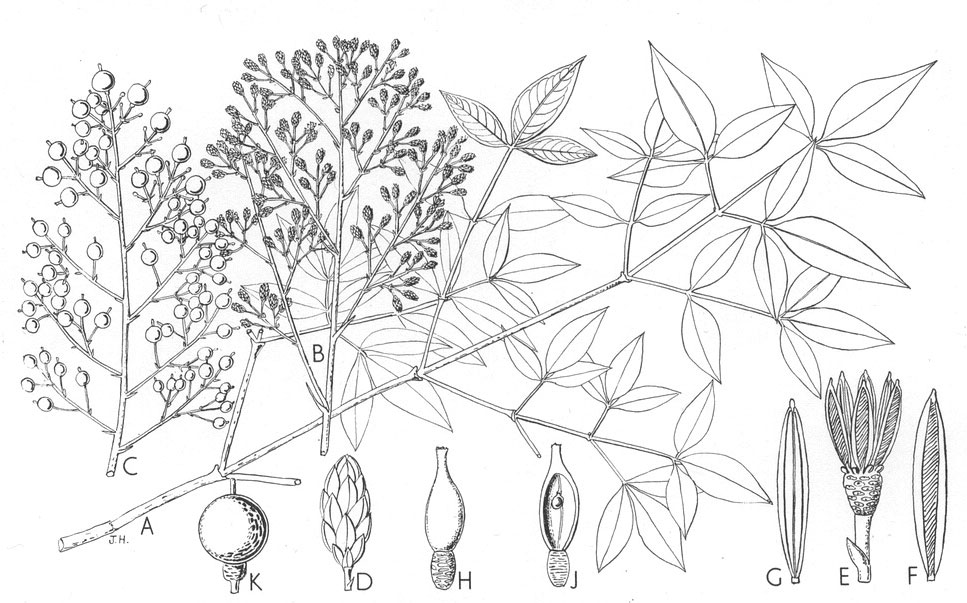 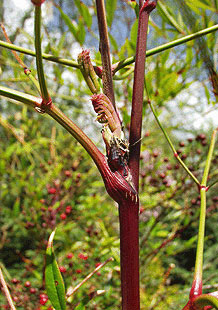 If plants are grouped, ovoid, shiny red berries, 5–10 mm diameter, follow the flowers in September and persist into and through the winter. Single plants seldom fruit heavily. At first fruit are green, but mature to bright red, with two grayish brown hemispherical seeds. Seeds are viable, but can be slow to germinate.

Several southeastern states of the USA list N. domestica as a potentially invasive plant on web sites and in informational brochures.

Because naturalized populations are generally small, they could be eradicated locally.  The plant is widely used in landscaping, however, and new populations are likely to occur.

In areas where N. domestica is invasive, it is recommended to limit new plantings and remove existing plantings or cut off fruits. When plants are transported or removed plants, care is needed not to spread seeds.

Plant the native or non-invasive alternatives. Inform the public to refrain from purchasing, propagating, or planting sacred bamboo due to its ability to escape from cultivation.

Hand pulls the smaller infestations careful to remove all fragments of root to prevent re-infestation. Frequent mowing will be effective but the plant may continue to spread via underground runners.

Care should be taken to contain seeds when moving plants.

Although N. domestica is occasionally attacked by insects and pathogens, none of these are considered for use as biological controls.

Spot treatments of glyphosate or triclopyr are effective at killing N. domestica.  Plants can be sprayed with glyphosate between August and October in the southeastern USA, or tall plants can be cut and the stumps treated with herbicide. In winter, plants can be killed using a basal bark treatment of herbicide in oil.