Trending
You are at:Home»Herbs and Spices»Traditional uses and benefits of Sugar Maple 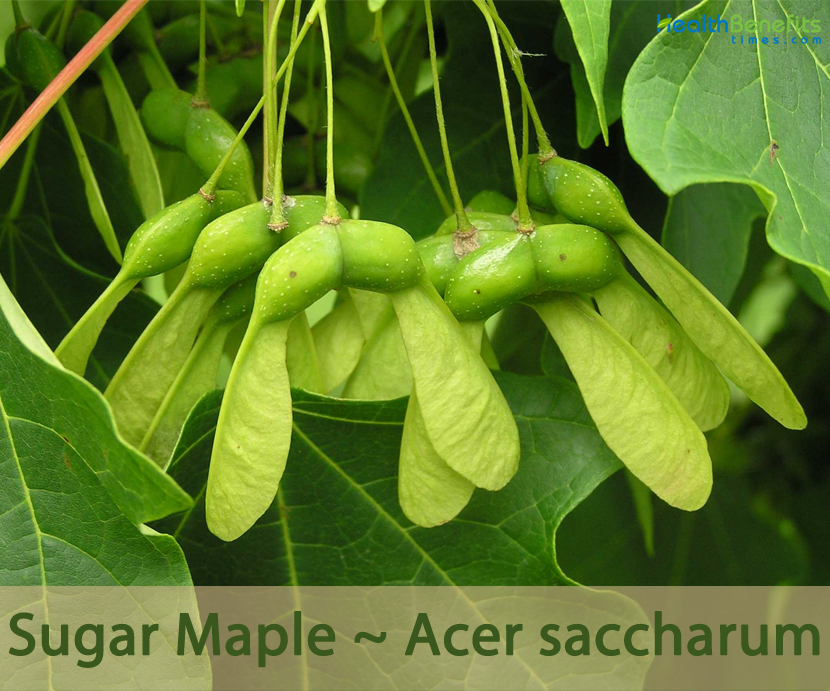 Acer saccharum commonly known as sugar maple is a species of flowering plant in the soapberry and lychee family Sapindaceae. The plant is native to Nova Scotia and New Brunswick westward to Ontario and Manitoba, southward through Minnesota, and eastern Kansas into northeastern Texas.  It extends eastward to Georgia and northward through the Appalachian Mountains into New England. Sugar maple is best known for being the primary source of maple syrup and for its brightly colored fall foliage. It may also be known as Sugar Maple, Florida Maple, Rock Maple, head maple, sugar tree, bird’s-eye maple, and hard maple particularly when referring to the wood. Genus name is the Latin name for a maple tree. Specific epithet means sugary in reference to the sweet sap. Saccharum is the genus name for sugarcane.

Sugar Maple is a large, slow-growing, deciduous hard-wooded tree that normally grows about 90 to 120 feet (27-37 m) in height and 30 to 36 inches (76-91 cm) in diameter. Extremely large specimens have reached more than 130 feet (40 m) in height and more than 5 feet (1.5 m) in diameter. Sugar maple is long-lived and plants can survive for 300 to 400 years.  A 10-year-old tree is typically about 5 m (20 ft.) tall. As with most trees, forest-grown sugar maples form a much taller trunk and narrower canopy than open-growth ones. The plant is found growing in hilly woods, rich, mesic woods, drier upland woods, stream terraces, stream banks, valleys, canyons, ravines, wooded natural levees, margins of glades, ledges and bases of bluffs, sandy woodlands, north-facing wooded slopes and limestone glades.

The plant can grow on a wide variety of soils, but typically grows best on deep, moist, fertile, well-drained soils. It grows on sand, loamy sand, sandy loam, silty loam, and loam. Sugar maple is commonly associated with alluvial or calcareous soils but also grows on stabilized dunes.  This tree is intolerant of flooded soils and generally grows poorly on dry, shallow soils. Sugar maple grows about one foot each year in most soils but is sensitive to reflected heat, and to drought, turning the leaves brown (scorch) along their edges.  Sugar maple is relatively deep-rooted, with many extensively-branched laterals.

Bark is variable, brownish on younger trees and light gray to dark gray on old trunks becoming rough and deeply furrowed into narrow scaly ridges that have flat irregular surfaces. Twigs are slender, shiny, and brown to reddish-brown, with lighter lenticels while new. Spring growth is smooth and green. The terminal buds are slender with sharp points and tightly wrapped scales.

Leaves are simple, deciduous and opposite, the blade up to 6 inches long and 7 inches wide with 5 palmate lobes, the upper 3 are large and squarish below the pointed tips and the two basal lobes are much reduced or nearly lacking. The stalk is hairless or with a few sparse hairs at the base, and is about the same length as the blade. Upper surface is dark green and smooth while the lower surface is paler, smooth or with minute, fine, appressed hairs mostly along major veins or just in the axil of the lateral veins across the surface. Edges are smooth between the 5 to 11 points on each side. Fall color is yellow, orange to red and will vary from year to year. In some trees, all colors above can be seen at the same time. They also share a tendency with red maples for certain parts of a mature tree to change color weeks ahead of or behind the remainder of the tree.

The flowers are unisexual. The tree can be monoecious with both male and female flowers or can be dioecious, with the flowers separated by sex on different trees. Male flowers (staminate) are in drooping umbels (tassel-like clusters) up to 3 to 4 inches long, on hairy stalks. Each cluster will have 8 to 14 flowers and each individual flower is only about 1/8 inch long with a 5-toothed yellow-green calyx and around 6 to 8 stamens, no petals. The female flowers (pistillate) are also in drooping clusters, but shorter, 1 to 2 inches long. They are the same size and color as the male flowers but with a 2-carpel ovary and a divided style. Both flower sexes appear with the leaves and can be together in the same cluster when the tree is monoecious. Flowers are wind pollinated. Sugar maple will generally begin flowering when it is between 10 and 200 years old. Flowering occurs in early spring after 30–55 growing degree days. Flowering normally takes place in between April to May. 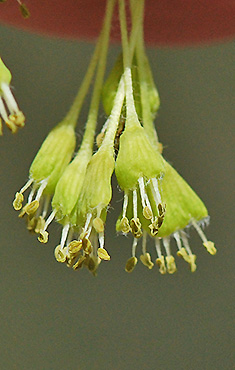 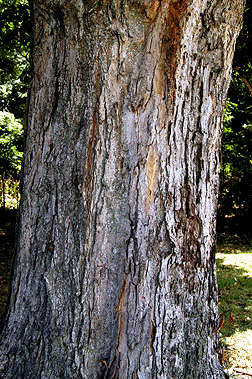 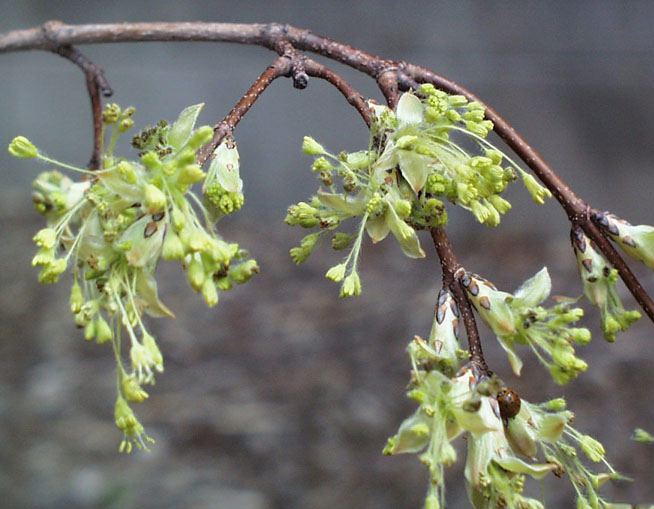 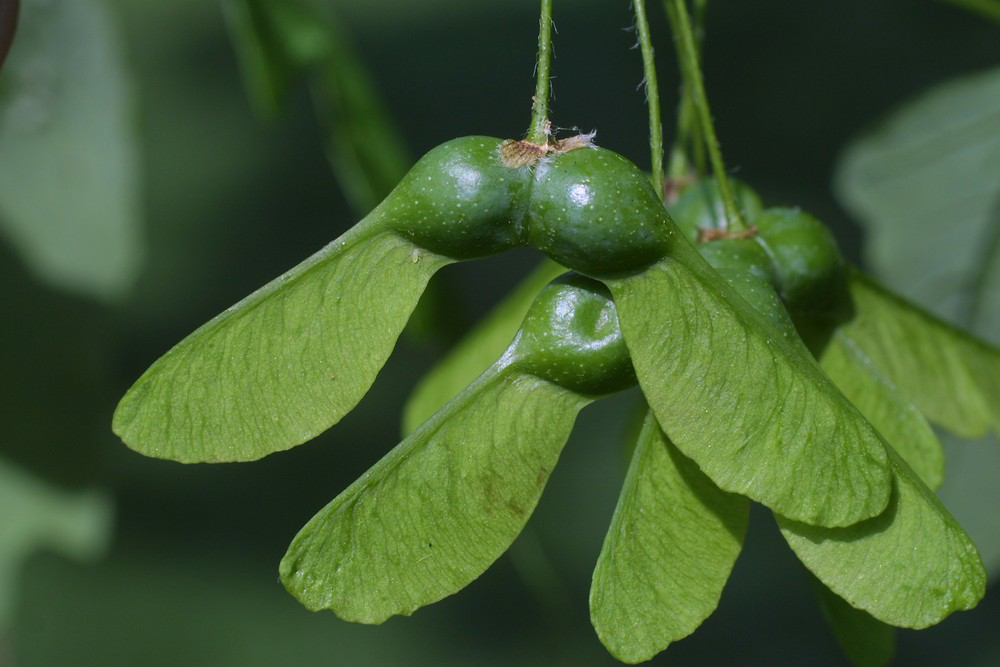 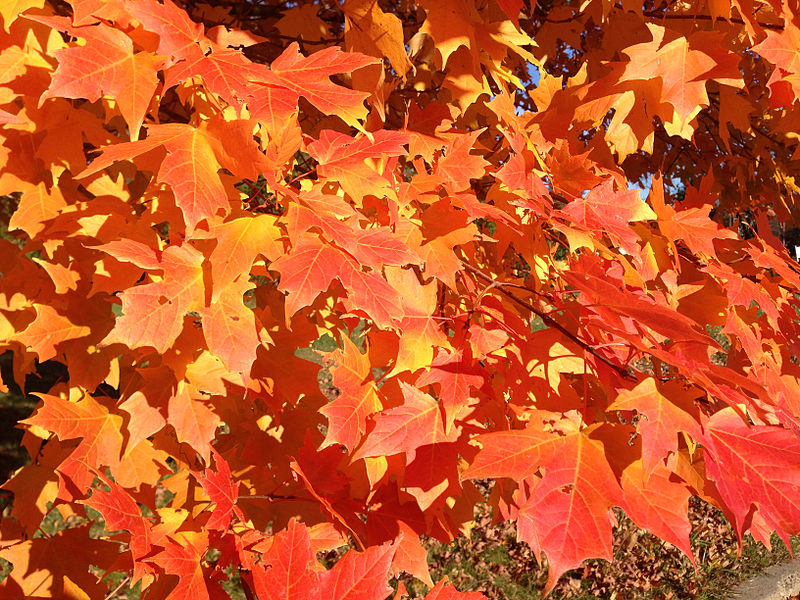 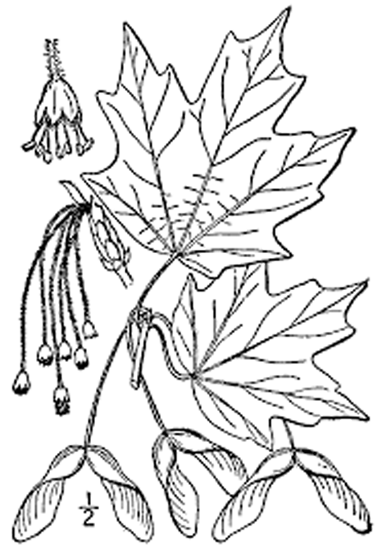 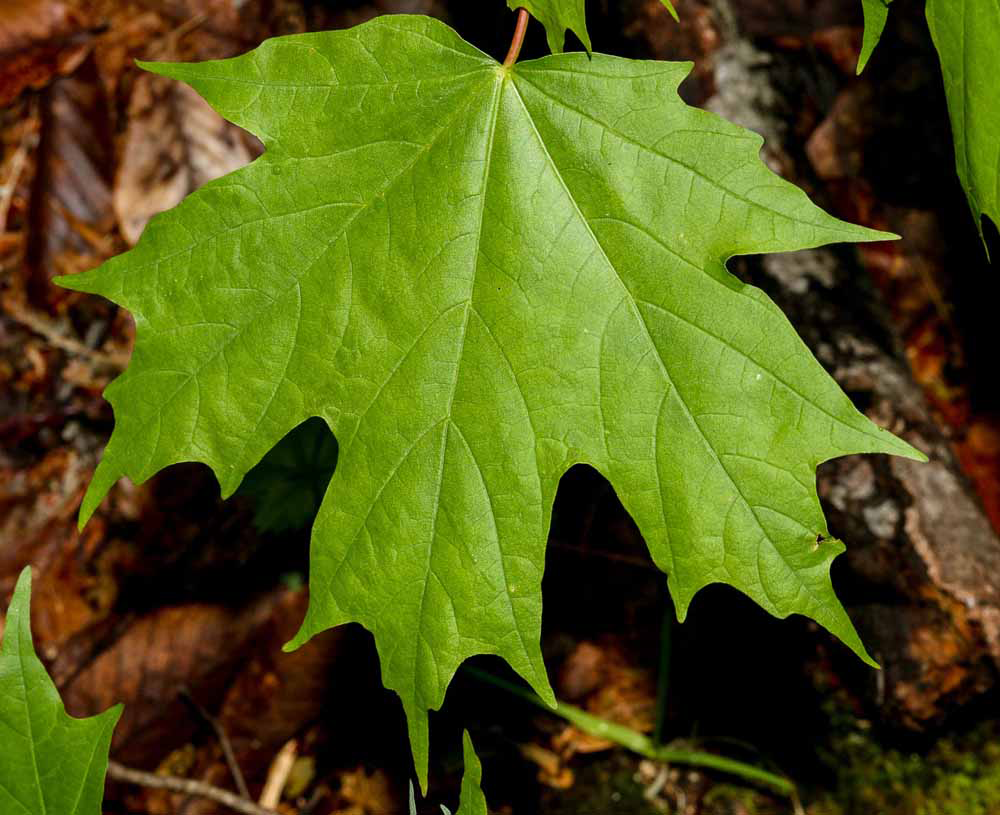 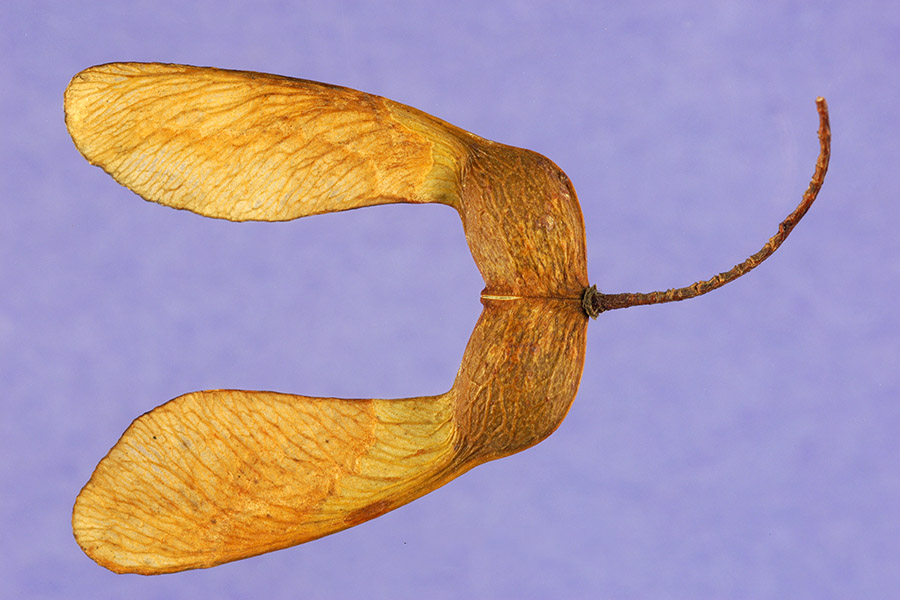 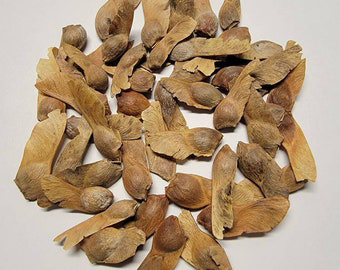 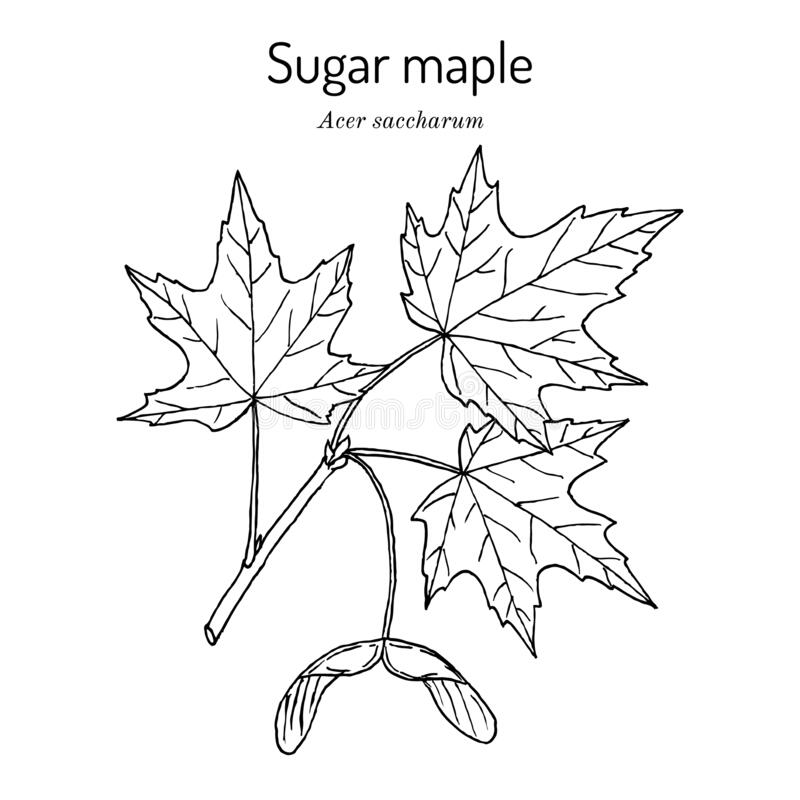 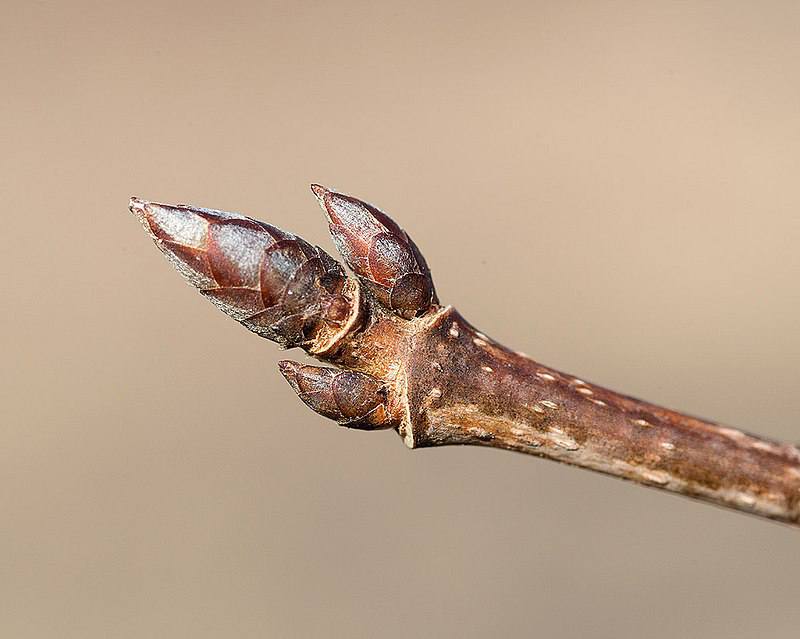 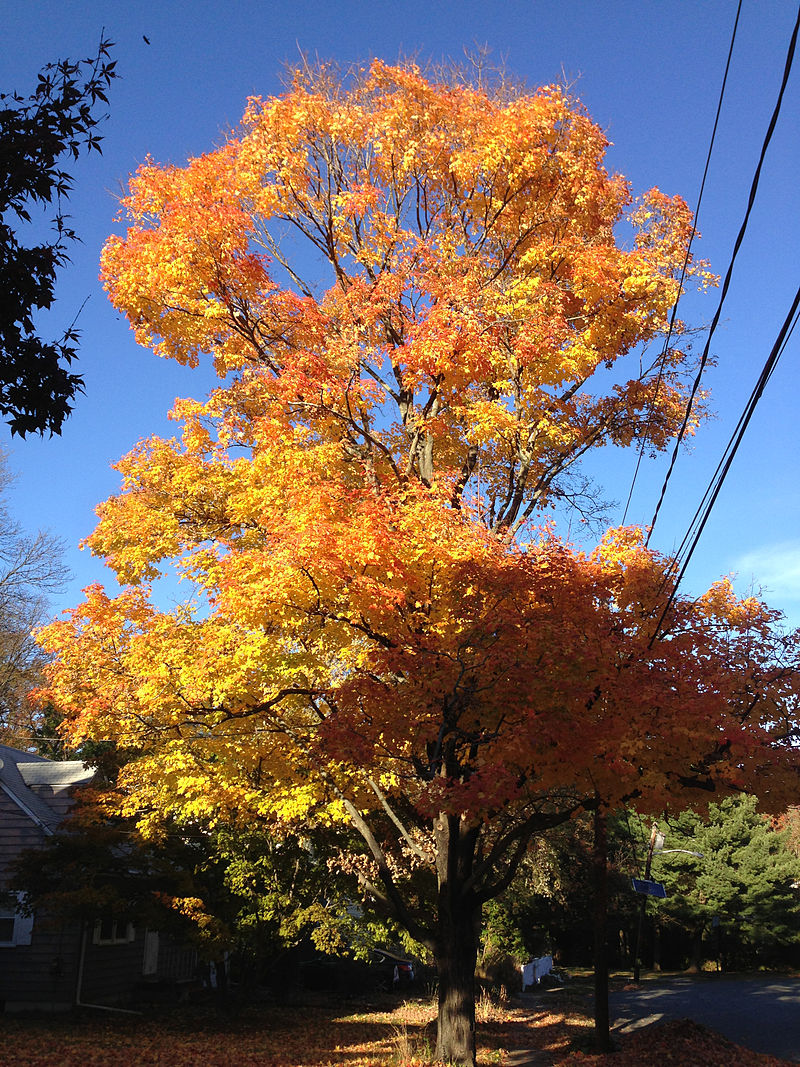 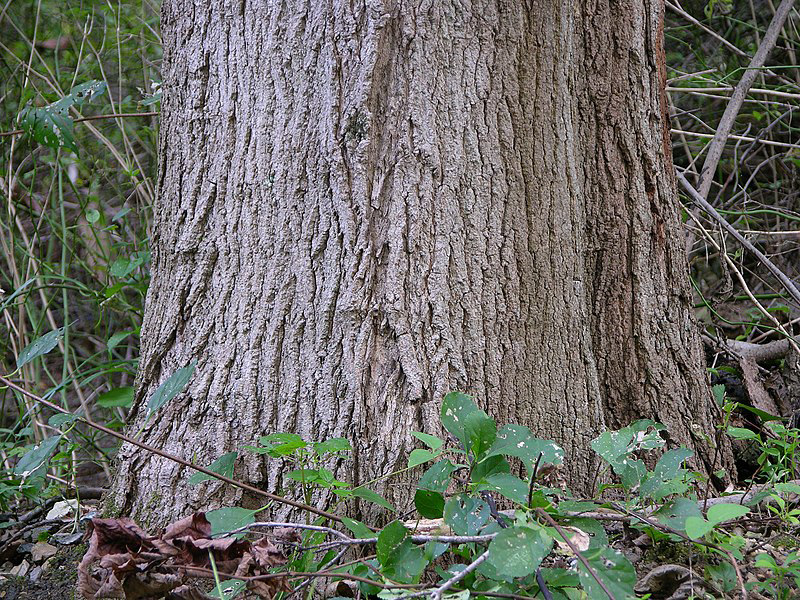 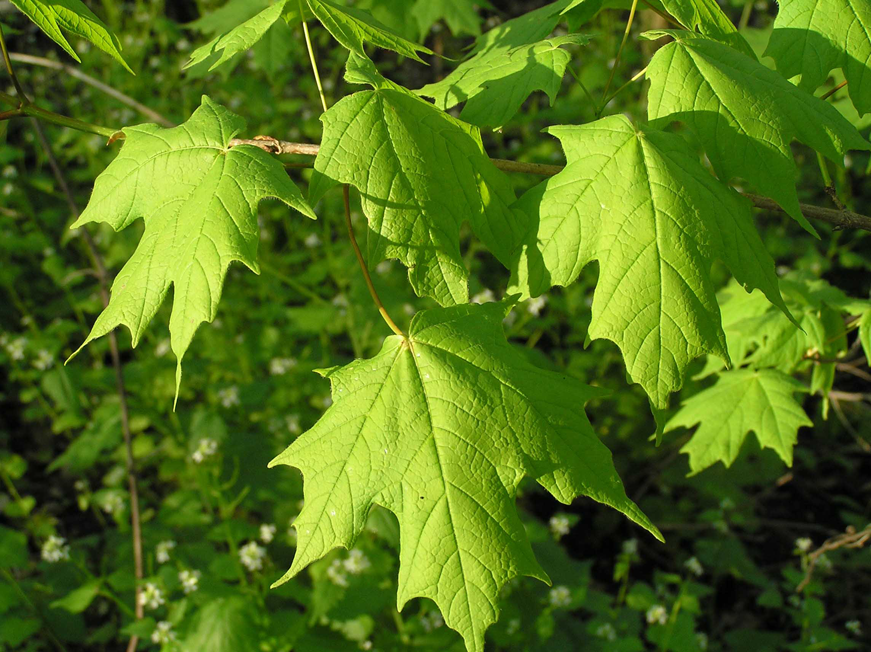 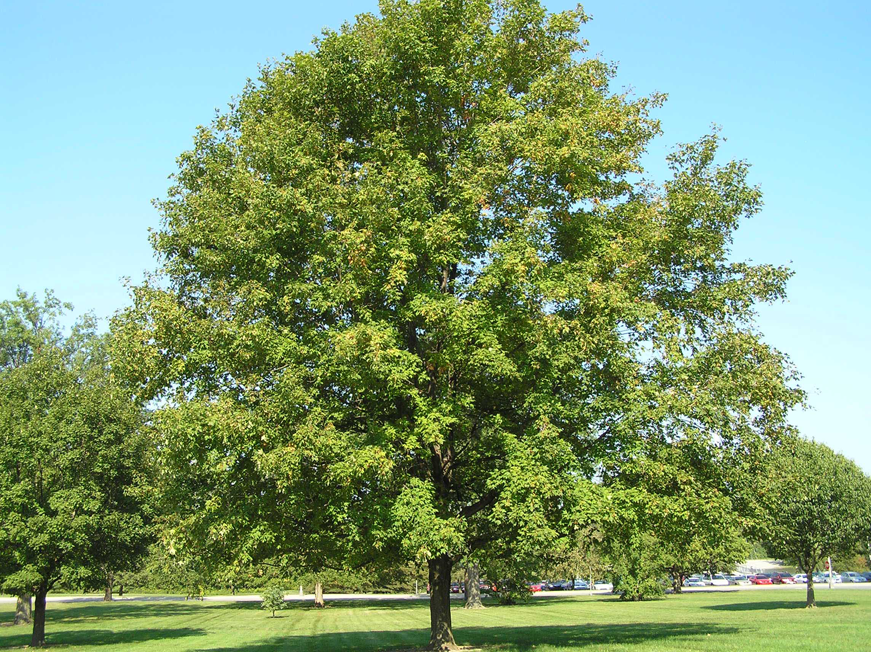 Fertile flowers are followed by a pair of one-seeded samaras (winged seeds) each about 1 inch long, with a broad wing that is paired at the top forming an angle of 60 to 90 degrees. Fruits are initially green turning to light brown as they mature.  These mature in late summer, drop from the tree and are wind dispersed. It usually takes 30 to 40 years for a tree to produce a quantity of seed. Fruit matures from late August into October. Occasionally both samaras contain seed or both will be empty. Some trees produce triple samaras and others produce samaras with double wings. Samaras collected from trees having the bird’s-eye wood grain characteristic showed a consistency of overlapping of the wings, a strong union between samaras, and lighter colored wings after drying but these characteristics have not been confirmed as being an attribute associated with bird’s-eye.