Trending
You are at:Home»Fruits»Traditional uses and benefits of Watermelon Berry 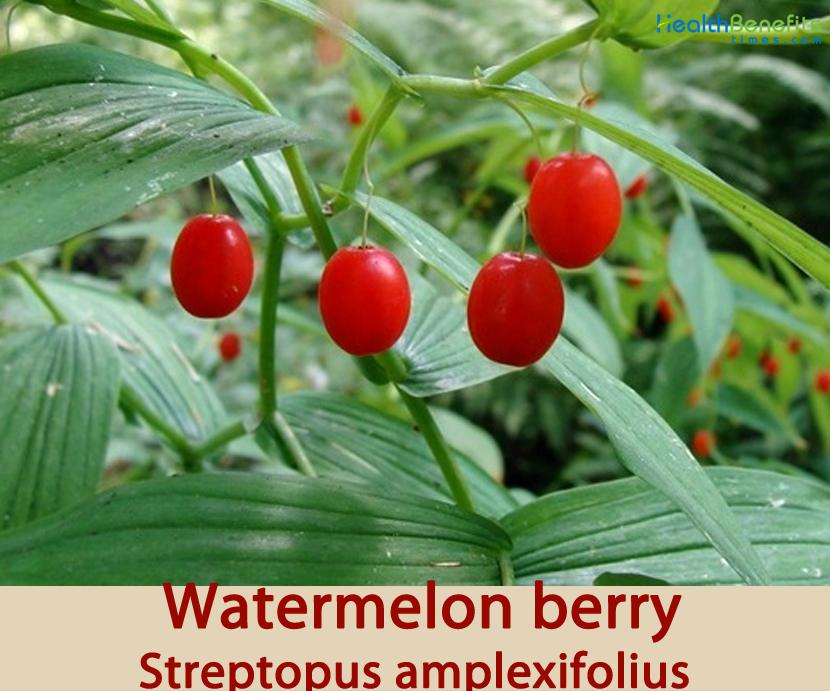 Streptopus is from the Greek word streptos which means twisted and podus which means foot, in reference to the bent or twisted penduncles. Specific epithet amplexifolius is from the Latin word amplexor which means to surround and folius means leaf. The name twisted stalk refers to the zig-zag stem, or to the strongly bent flower stalks. The plant is harvested from the wild for local use as a food, medicine and source of incense. It is sometimes grown as an ornamental.

The base of the leaf clasps the stem and the basal lobes nearly joined on the other side of the stem. The stem is hairless except sometimes at the base, freely branched, erect in the lower plant with branches widely spreading, and often zig-zags some between the alternately attached leaves.

The leaves are alternate along the stems and are oval to oblong-lanceolate in shape with parallel venation. Leaves are glaucous beneath and the margins are either entire or minutely toothed. They measure 5-15 cm long and 3-7 cm wide. The stalk less leaves clasp the stem at their bases (Those of rosy twisted-stalk do not clasp the stem.). Basal leaves are lacking. The lower surface of the leaves have a dull grayish-green color covered in a waxy bloom.

The flowers droop from leaf axils, hanging on thin, sharply bent stalks from 9-15 mm long. The flower stalk is jointed and abruptly bent or kinked. They consist of a small gland at the bend.  Flowers are white and greenish-tinged, bell-shaped (usually single), consisting of six bell-shaped tepals 9-15 mm long. Tepals are oblong-lanceolate, concavely tapering to long, pointed, spreading or bent-back tips. The 6 stamens are of unequal length, the innermost longer than the outer stamens. Each flower has one 3-chambered pistil. The flowers are typically hidden under the leaves and may go unseen. Flower stalks are up to 2 inches long, wiry and bent or twisted. 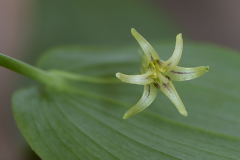 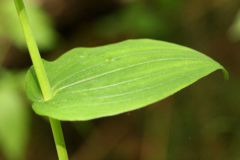 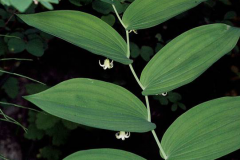 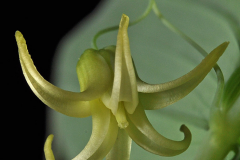 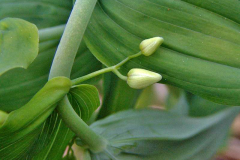 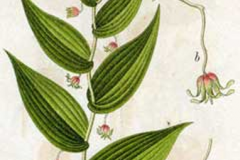 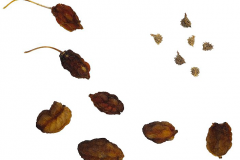 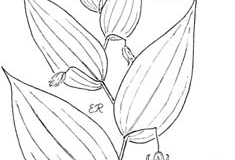 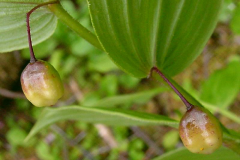 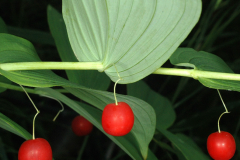 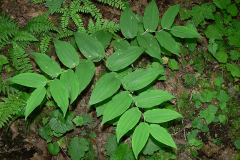 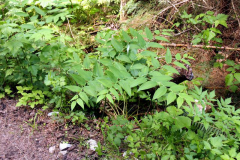 Fertile flowers are followed by edible, oval to oblong shaped berries 10-12 mm long.  The fruit ripens from light green to yellow-orange or red often becoming dark purple.  The fruit hangs on the sharply bent stalk. Seeds are several to many per berry.

The plant’s green shoots are also edible and are said to taste similar to cucumber when consumed raw.   The fruit is used in the preparation of soups and stews.  The tender young shoots can be eaten raw or cooked, however, consumption of large quantities is said to act as a laxative. Thus, the common name, ‘Scoot berries’.

Watermelon berries can be eaten in most of the same ways as any other wild berry, but here are some ideas on how to use them. Just keep in mind that they’re juicy, don’t have a lot of color, and do contain noticeable amounts of seeds.

Watermelon berries are the kind of berry that you’ll want to strain before making syrups, jellies or jams; otherwise the seeds will likely be a nuisance. All three of those things would be delicious with watermelon berries, though.

I’ve heard that some people bake them directly into breads or wild berry muffins and the seeds aren’t as noticeable.

If you can harvest enough berries, you can also make watermelon berry juice from them (strained, of course). And whenever you’ve got juice, you can freeze it into tasty fruit pops.

If you have a few other salad ingredients, the seeds would be add a nice texture paired with a vinaigrette dressing.

Fruits W
Share. Twitter Facebook Google+ Pinterest LinkedIn Tumblr Email
Previous ArticleHelp your loved one recover from a stroke with these natural tips
Next Article What you need to know about text messaging for doctors and healthcare providers