Trending
You are at:Home»Herbs and Spices»Traditional uses and benefits of Weeping willow 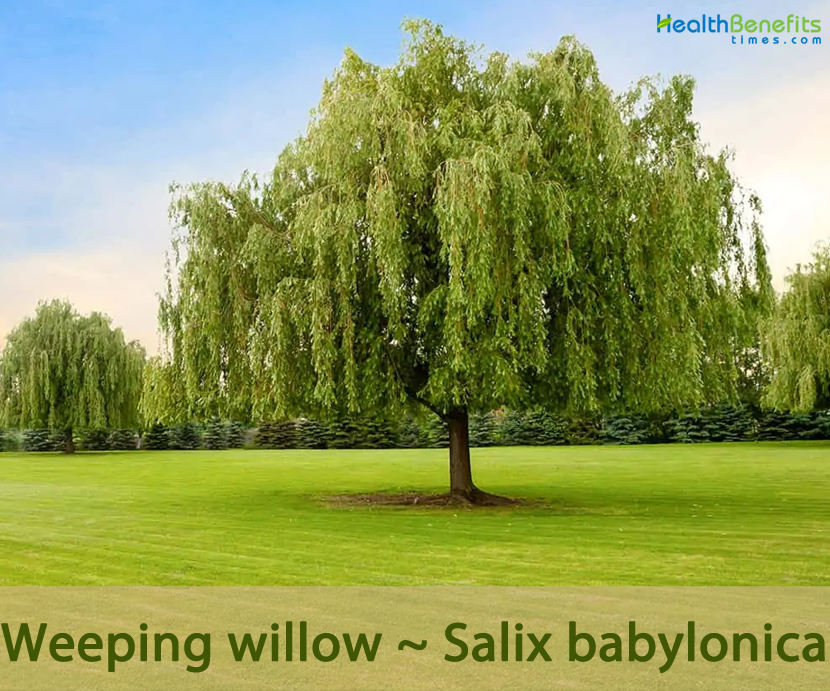 Weeping willow or Babylon willow scientifically known as Salix babylonica is a species of willow belonging to Salicaceae Mirb. (Willow family). The plant is native to dry areas of northern China, but cultivated for millennia elsewhere in Asia, being traded along the Silk Road to southwest Asia and Europe. It is widely naturalized in southern and eastern Australia (i.e. in southern and central Queensland, eastern and southern New South Wales, the ACT, Victoria, Tasmania, south-eastern and eastern South Australia, and near Perth in south-western Western Australia). It is also widely naturalized overseas in Europe, southern Africa, New Zealand and the USA. Some of the popular common names of the plants are Weeping willow, Babylon Weeping Willow, Peking Willow, Chinese Weeping Willow, Chinese willow and mourning willow.

Genus name is the Latin name for this plant. The specific epithet means of Babylon and was given to this tree by Carl Linnaeus who mistakenly believed it to be the biblical willow of Babylon instead of a tree from China that was likely transported westward beginning in biblical times along the Silk Road trade route from China through central Asia, Afghanistan, Iraq, and Syria, eventually finding its way into Europe by the early 1700s. The trees growing in Babylon along the Euphrates River in biblical times were probably poplars (Populus euphratica) which are not willows but are in the willow family. The plant is harvested from the wild for local use as a food, medicine and source of materials. It is cultivated in different parts of the world for various uses, for example in Cuba it is grown for basket making material, in Korea for medicinal use, in China for reforestation and in Ukraine for soil stabilization. It is widely grown as an ornamental.

Weeping willow is a medium to large-sized, rounded, deciduous landscape tree with a stout trunk topped by a graceful broad-rounded crown of branches that sweep downward to the ground. The tree normally grows around 10 – 12 meters tall, occasionally reaching 18 meters. The short bole can be quite thick. It grows rapidly, but has a short lifespan, between 40 and 75 years. The plant is found growing in shrub land, riparian habitats, and fresh water wetlands, beside lakes, ponds, rivers, streams, in parks, maintained gardens and larger domestic gardens. The plant is tolerant of many soil types, including alkaline, loamy, sandy, and clay soils. However, their preference is for moist, well-draining, slightly acidic soils. If your soil is too alkaline, you can make it more acidic by amending it with sulfur. It rarely thrives on chalk.

Many consider this tree to have the best form of the weeping willows available in commerce. Bark is gray-brown or gray-black with irregular furrows. Branchlets are typically green or brown. This weeping willow can be a spectacular specimen at the edge of a pond with its branches gracefully weeping down to touch the water; however, it is often very difficult to site this tree in a residential landscape. Some experts believe that the true species no longer exists in the wild in China and that plants being sold today under the name S. babylonica are primarily hybrids or mistakenly identified similar species.

The stems are reddish to yellowish brown and smooth. The nodes are rounded, hairy, and point downward. The wood is weak and susceptible to breakage and litter.

Weeping willow has yellowish-brown shoots, with small buds. Smooth, hairless leaves are alternate, simple, and linear-lanceolate with an acuminate apex. They are 9-16 cm long and 0.5-1.5 cm wide, acuminate, cuneate, and have finely serrated margins. The leaves are light green above, and grayish-green or glaucous beneath. In autumn, the leaves turn golden-yellow. They are glabrous, and the stipules are slender. The fall foliage is greenish-yellow or sometimes golden yellow. The leaf margin is finely toothed. Leaves are spirally arranged along the branches. Leaf stalk is 5-10 mm long and pubescent.

Plant is dioecious with Male and female flowers appearing in silvery green catkins born on separate male and female trees. Male catkin is 1.8-3 cm long and 0.5-1 cm wide while female catkin 1.5-2.5 cm long and 0.5 cm wide.  They are silvery-green, non-showy, and appear from April to May. The male catkin is the showiest with only stamens, no petals, and measures 1 to 2 inches long. Flowers richness in nectar attracts an abundance of insects.

Fertile flowers are followed by dry, hard, 3-4 mm long capsule. It is initially green and turns yellowish-brown when ripened. Mature capsule releases many tiny, down-covered, or cottony seeds. It does not attract wildlife. They are not showy and create litter. They ripen in late May to early June.

Historically, weeping willow was used as a popular trading item along the Silk Road. It was introduced to England from Syria in 1730. It was first described and assigned its scientific name by the Swedish botanist and plant pathologist, Carl Linnaeus, in 1736. Linnaeus named weeping willow salix babylonica after mistaking it for the trees described growing along the rivers of Babylon in the Bible. The trees mentioned in the Bible were likely poplars, which are members of the willow family (Salicaceae). The species that Linnaeus observed was the variety that had been introduced into the Clifford Garden in Harte Kamp in the Netherlands. 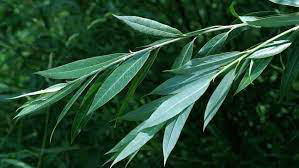 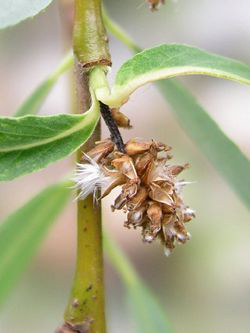 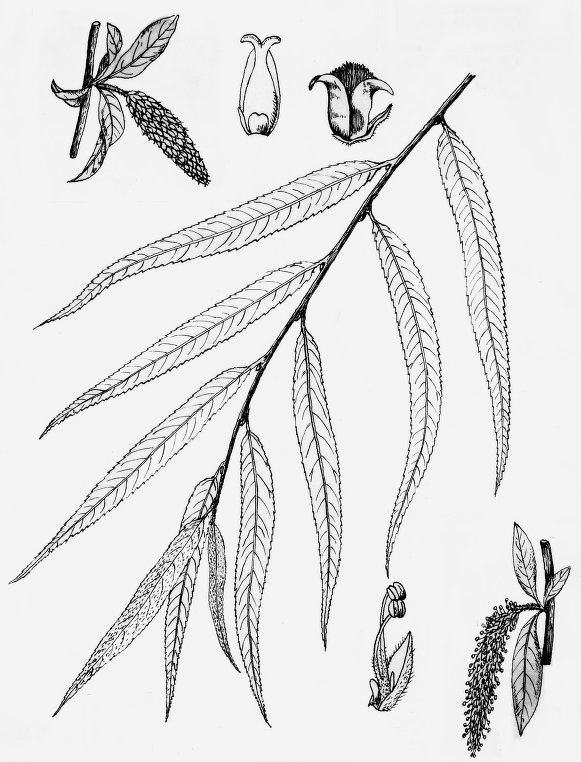 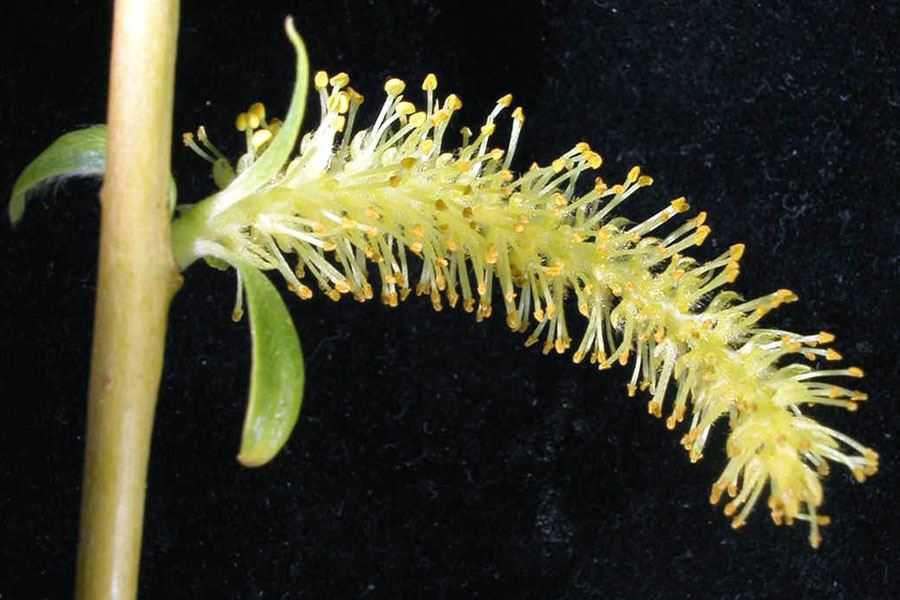 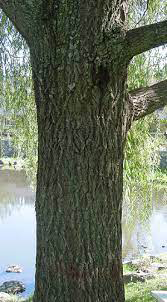 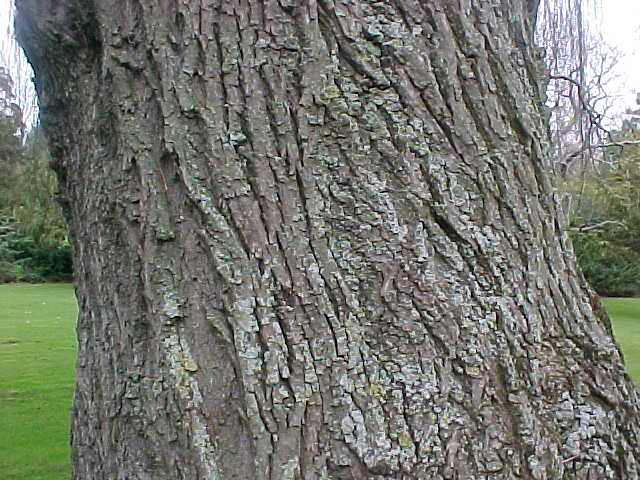 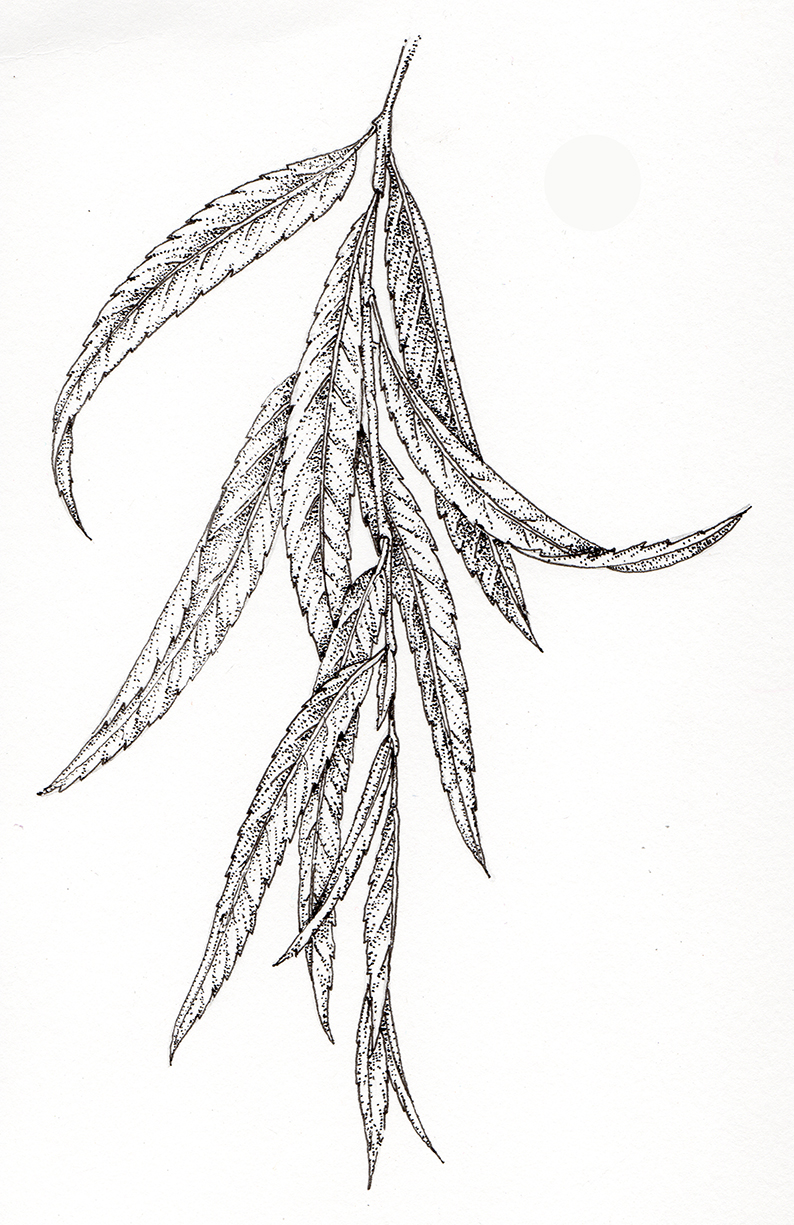 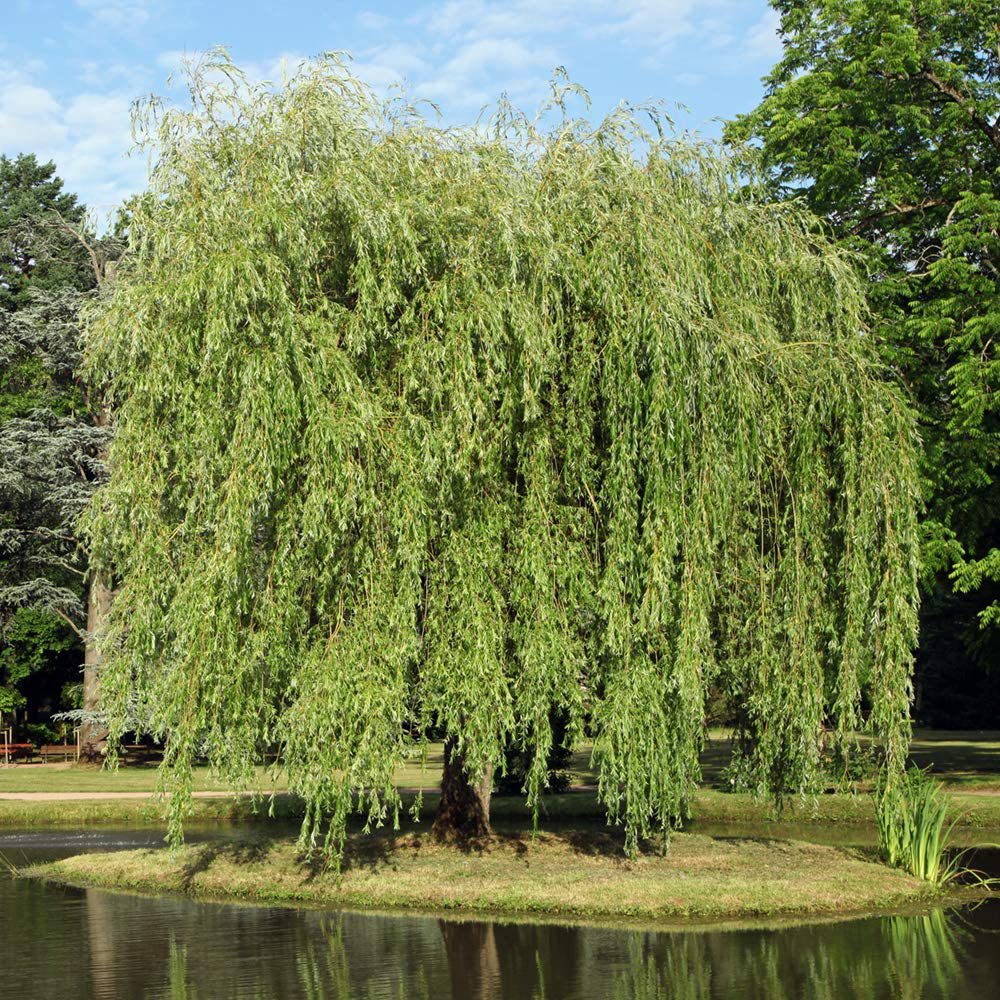 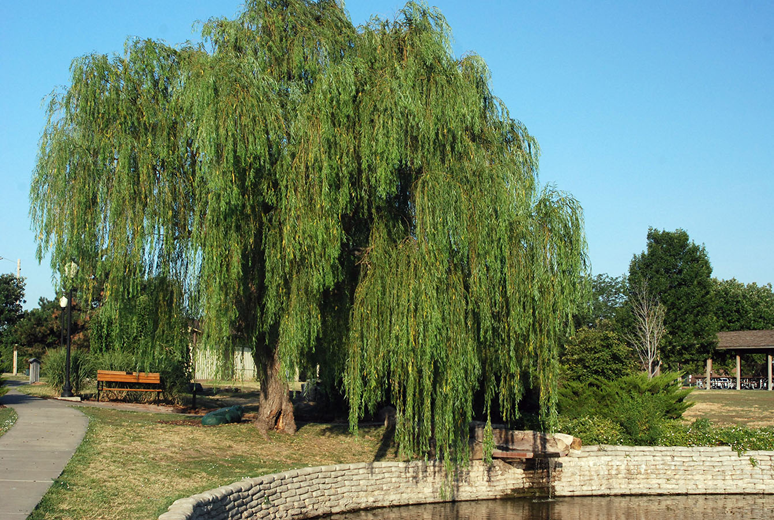 The Willows National Management Guide: Current management and control options for Willow (Salix spp) in Australia is divided into six sections that includes detailed information on the spread and impacts of willows on riparian habitats, guidelines for how to plan a willow management program, including when to prioritize, detailed descriptions of available control and waste management methods, including when to use specific methods. The manual also includes important information on how to sustain the program in order to endure long term benefits, monitoring, managing erosion, re-vegetation and case studies of different methods, approaches and strategies in management.

The Weed Control Methods Handbook provides you with detailed information about the tools and techniques available for controlling invasive plants, or weeds, in natural areas. This Handbook is divided into eight chapters, covering a range of different control methods: manual, mechanical, promoting competition from native plants, grazing, bio-control, herbicides, prescribed fire, solarization, flooding, and other, more novel, techniques. Each control method has advantages and disadvantages in terms of its effects against the target weed(s), impacts to untargeted plants and animals, risks to human health and safety, and costs.