Trending
You are at:Home»Fruits»Facts about Wild Almond 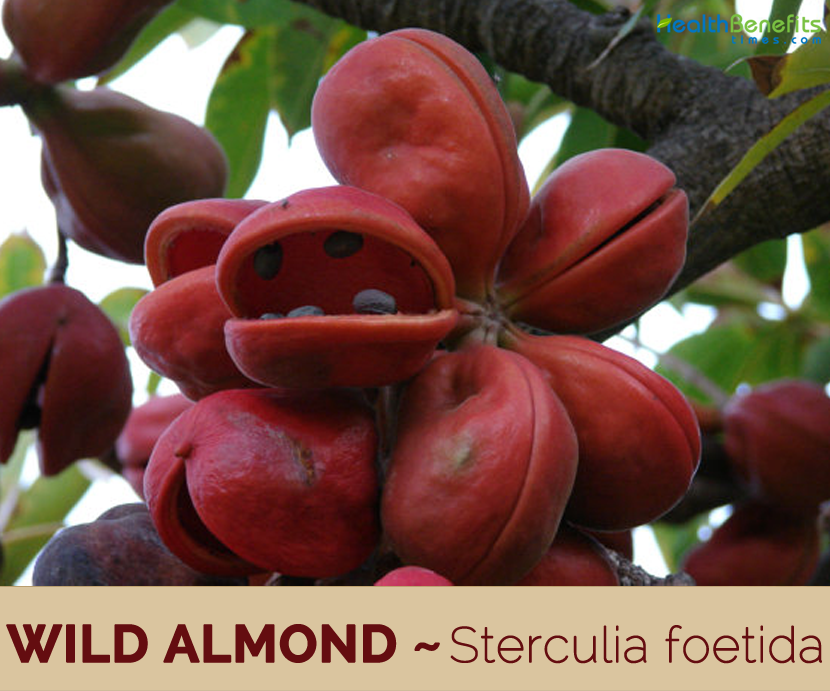 Wild Almond is an attractive, umbrella-shaped, spreading deciduous tree that grows about 35 meters (115 ft.) tall and 150 cm girth. The plant is found growing in primary and secondary forests, usually on river banks and sandstone rocks along the coasts, and in thickets and open areas. Although adaptable to most soils, it requires adequate moisture for optimum growth and development. The grey bark is smooth, spotted with brown and faintly ridged. The branches are whorled and usually horizontal, the numerous branchlets gracefully up-curved and crowded at the ends with large, palm-like leaves, remind one somewhat of the English Horse-chestnut.

The leaves are placed at the end of branchlets; they have 125–230 mm long petioles; the blades are palmately compound, containing 7-9 leaflets. The leaflets are elliptical, 100–170 mm long, and shortly petioluled. The petioles are the source of the foul smell of the plant

The flowers are arranged in panicles, 100–150 mm long. The green or purple flowers are large and unisexual as the tree is dioecious (male and female flowers are found on different trees). The calyx is dull orange and is divided into five sepals, each one 10-13 mm long. The fruit consists of four to five follicles; each follicle is large, smooth, ovoid red nearly smooth, obovoid about 10 centimeters long generally containing 10-15 seeds. The follicles are scarlet when ripe. Flowers appear in March, and the leaves appear between March and April. The fruit is ripe in February. Seeds are 2.5–3 cm long, purple black, velvety, ellipsoid or oblongish, with small waxy yellow rudimentary aril at one end. The seeds are edible after toasting and taste like chestnuts (Castanea sativa). They also contain oil that is used medicinally, while the timber is used for making furniture and the bark for rope.