Trending
You are at:Home»Herbs and Spices»Information about Wild Clary
Wild Clary with scientific name as Salvia verbenaca, is also known as wild sage. It is endemic to the British Isles, the Mediterranean region in Southern Europe, Near East, North Africa, and in the Caucasus. It is regarded as an introduced species which have got naturalized in the Eastern United States.

Wild Clary is a tall perennial herb having hairy stems and branches which erectly sprawl out. Leaves are toothed, basal varying from 3 to 10 cm (1.2 to 3.9 in) long. Flowers are soft purple to violet in mid-summer.  The flower blooms from June to September and seeds ripen from July to October. Flowers are bisexual and are pollinated by bees. This plant attracts pollinators and wildlife. It does well in neutral and alkaline soils and requires full sun.

It is a perennial herb which measures about 18 inches (46 cm) high with hairy stems and branches bearing soft purple to violet lipped flowers. In order to preserve the honey from rain and flies, the tube of the corolla is lined with hairs. A bee inserting head in the mouth of the flower touches an inner end of anther, and raising it acts as a lever and cause outer surface to rub on its back, so deposits pollen. 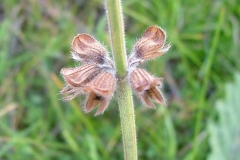 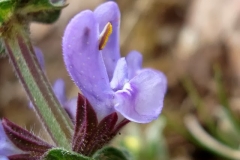 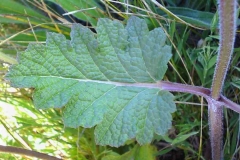 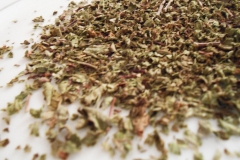 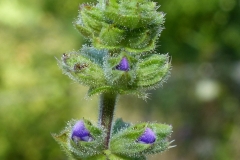 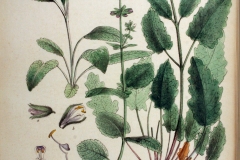 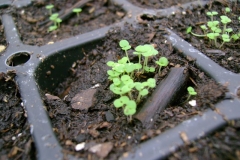 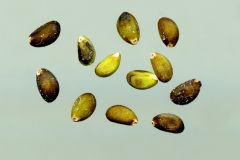 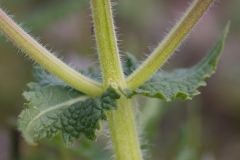 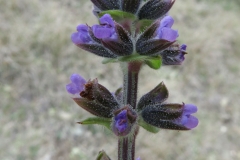 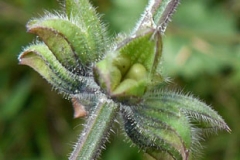 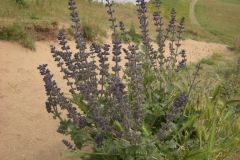 Stems are moderately to densely hairy and four angled. Hairs on upper parts of stems are sticky. Leaves are borne in pairs along stems and have variable shape ranging from oval to egg shaped in outline having irregularly toothed margins to lobed or deeply divided. Lower leaves measure 2.5-10 cm long and 1.5-8 cm wide which are borne on stalks and have pointed or occasionally rounded tips. Upper leaves are stalkless and smaller. Leaves are hairy somewhat having pimply surface texture.

Flowers are tubular measuring 7-13 mm long, borne in elongated clusters at tips of branches which are often branched at base. Flowers form in groups of 6 to 10 above small leafy bracts. Flowers are stalkless or borne on very short stalk measuring 2 mm long. Flowers have five purplish or green sepals (about 3.5-9 mm long) which are hairy moderately. Sepals are fused together into finely ribbed tube which has broad three toothed upper lobe and narrow two toothed lower lobe. Petals are hairless fused together at base into tube. They are purple, blue, lilac or pink in color and separate into two lobes. Lower lip is three lobed and upper lip is hooded. Each flower has two stamens and ovary topped with style and unequal two lobed stigma. Fruit is a schizocarp which splits into four one-seeded segments which matured. Seeds are broadly egg shaped and brown measuring 2-3 mm long & 1.8-2 mm wide. It has smooth texture.

This aromatic sage was used as flavoring in foods and to make tea. The flowers can be added to salads. Eyeseeds was a name given because it was “a plant whose seeds if blown into the eye are said to remove bits of dust, cinders, or insects that may be lodged there.”

This type of clary was thought to be more beneficial to the eye than the garden clary variety, clary sage. The seeds, like those of the garden clary, produce a great quantity of soft, tasteless mucilage when moistened. If seeds were inserted under the eyelids for a few moments, the tears dissolved the mucilage, which then enveloped any dust or motes and brought irritating matter out safely.