Trending
You are at:Home»Herbs and Spices»Uses and benefits of Wild Licorice – Glycyrrhiza lepidota 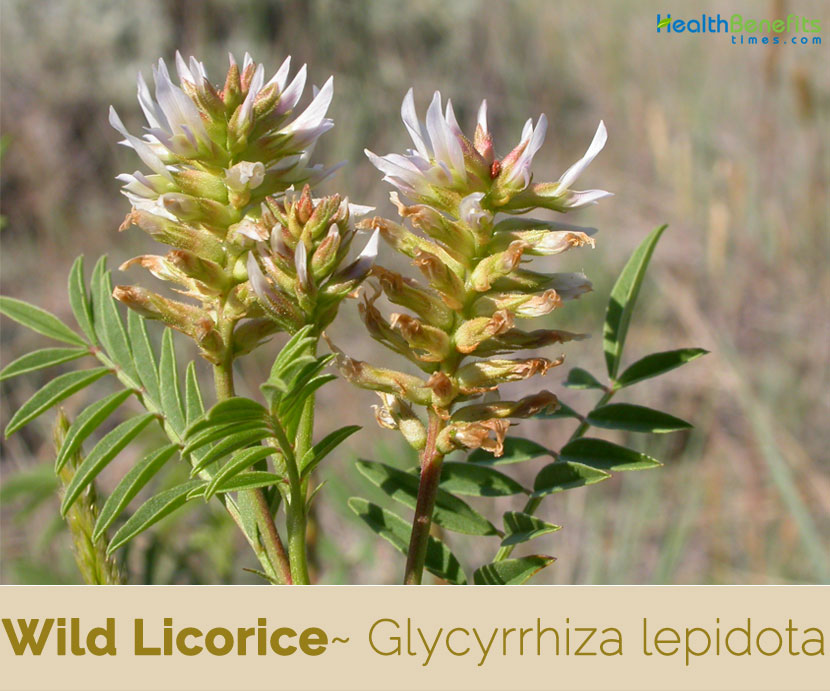 Glycyrrhiza lepidota popularly known as American licorice or Wild licorice is a species of Glycyrrhiza a genus in the pea/bean family, Fabaceae. The plant is native to temperate regions of western North America from central Canada south through the United States to California, Texas and Virginia, but absent from the southeastern states. It occurs from Ontario west to British Columbia, south to California, and east to Arkansas. It is also sometimes known in the United States as “wild licorice”, to distinguish it from the related European liquorice (Glycyrrhiza glabra) which is occasionally cultivated. Some of the popular common names of the plants are American Licorice, American liquorice, Wild Licorice, Licorice, American wild licorice and dessert root.

The genus name, Glycyrrhiza, is from the Greek glykos which means sweet and rhiza which means root referring to the sweet flavor of the roasted roots (commercial licorice comes from this genus). The species name, lepidota, means “scaly” referring to the minute brown scales on young leaves. It can be used as a pioneer species to revegetate bare or disturbed ground and is often the first species to invade a receding alkali flat. There is a market for American licorice root both for medicinal uses and flavoring; also the sweetening of tobacco products.

Wild Licorice is a long-lived rhizomatous perennial, leguminous forb normally growing about 1 to 4 feet (0.3-1.2 m) tall and has long tough brown roots which are said to be sweet and were used as food and for medicinal purposes by Native Americans. After eating a roasted root in 1806, Meriwether Lewis described an “agreeable flavor not unlike the sweet pittaitoe.” The plant is found growing in cultivated ground, waste places, roadsides, prairies, gravelly river bottoms, moist mountain, fields, meadows, borrow ditches, terraces, seeps, stream banks, wet meadows, floodplains, lakeshores, riparian corridors, lakeshores and along irrigation canals. The plant requires a deep well cultivated fertile moisture-retentive soil for good root production. It grows best on loam, sandy loam, and clayey loam soils, but occurs on gravelly substrates as well. The plant has extensive system of deep, fleshy roots. Rhizomes are many-branched and may grow up to several feet long. Stems are erect or ascending, 1 to several, mostly unbranched, glabrous or minutely hairy, ribbed when dry.

The leaves measure from 0.8 to 2.8 inches (2-7 cm) long and 0.16 to 0.8 inch (4-20 mm) wide and are pinnately compound in groups of 11 to 19 lanceolate to oblong leaflets. Leaflets are up to 1½ inches long and ½ wide, tapering to pointed or blunt tip, rounded or slightly tapered at the base, stalk less or nearly so, and often fold up some from the central vein especially when young. Edges are tooth less; surfaces are hairless but gland-dotted, especially on the underside.

The flowers are spike clusters, cone-shaped to cylindrical, 1 to 2 inches long arising from leaf axils. Flowers are white, cream, or pale yellow, about ½-inch long, pea-shaped with a long, erect upper petal. The cluster and its stalk are shorter than the subtending leaf. Flowering normally takes place in between July to August. 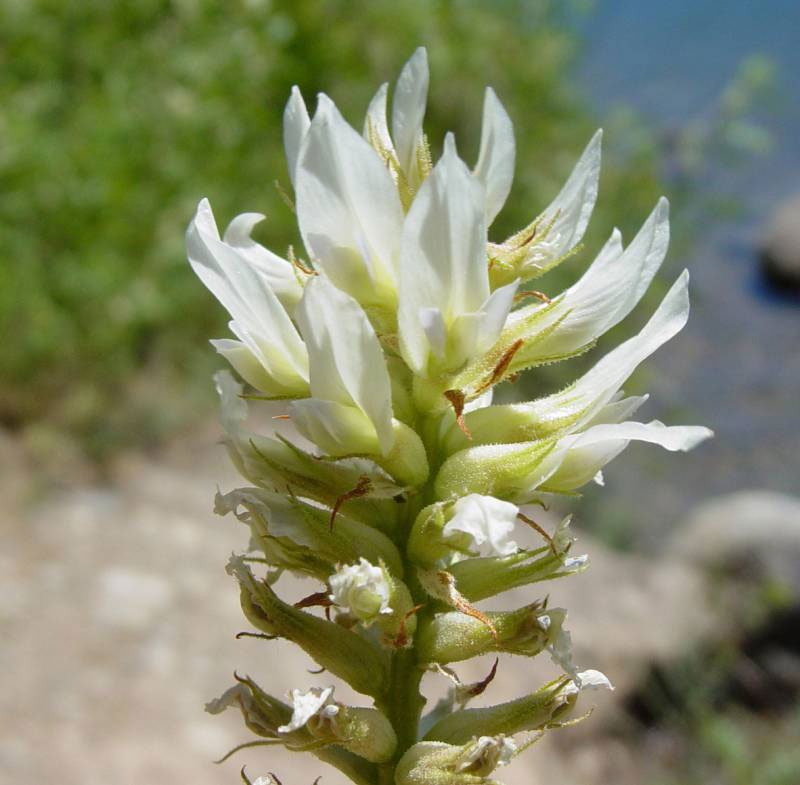 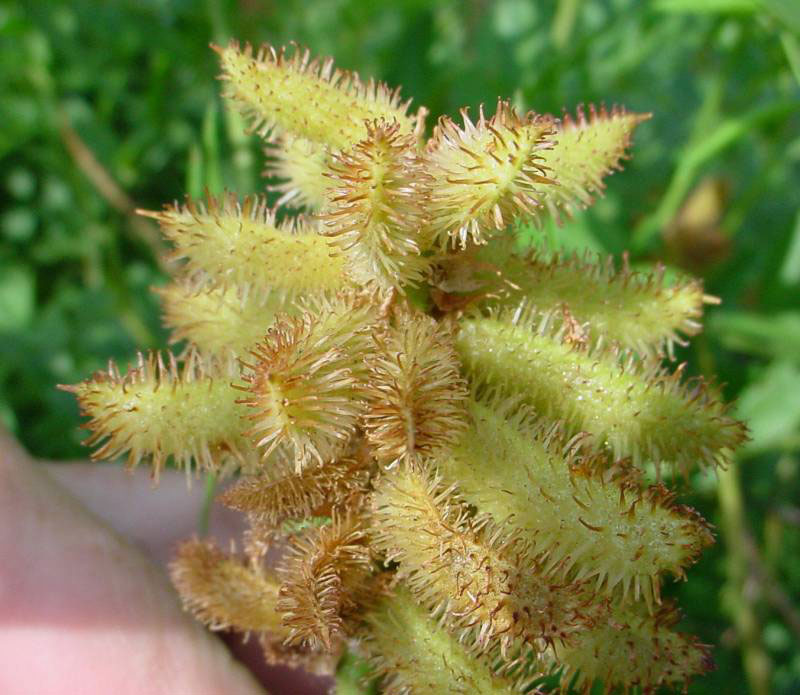 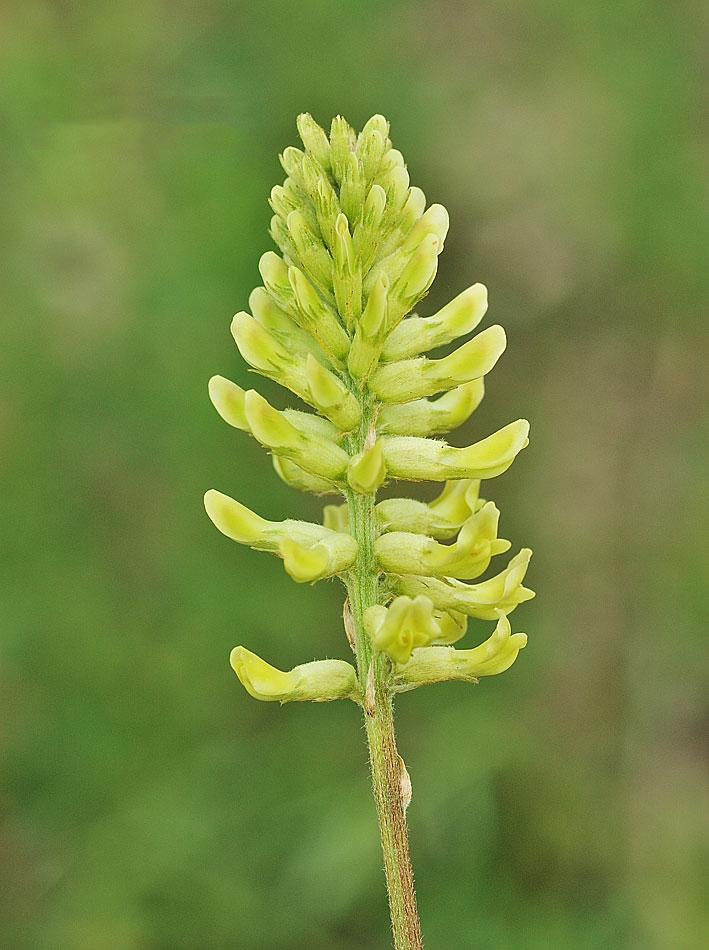 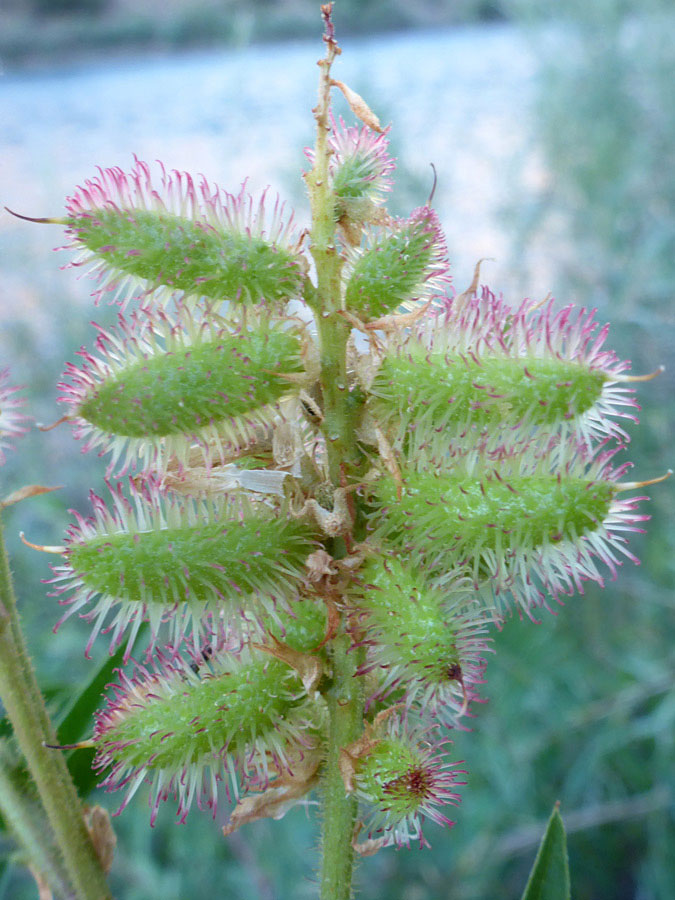 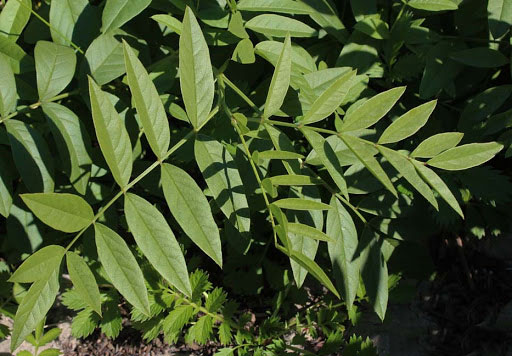 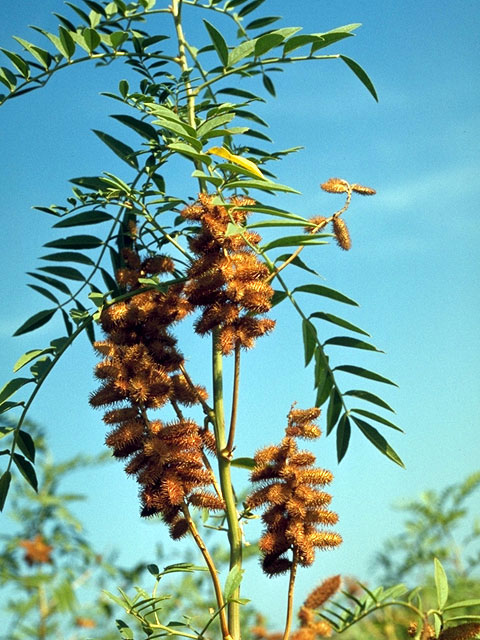 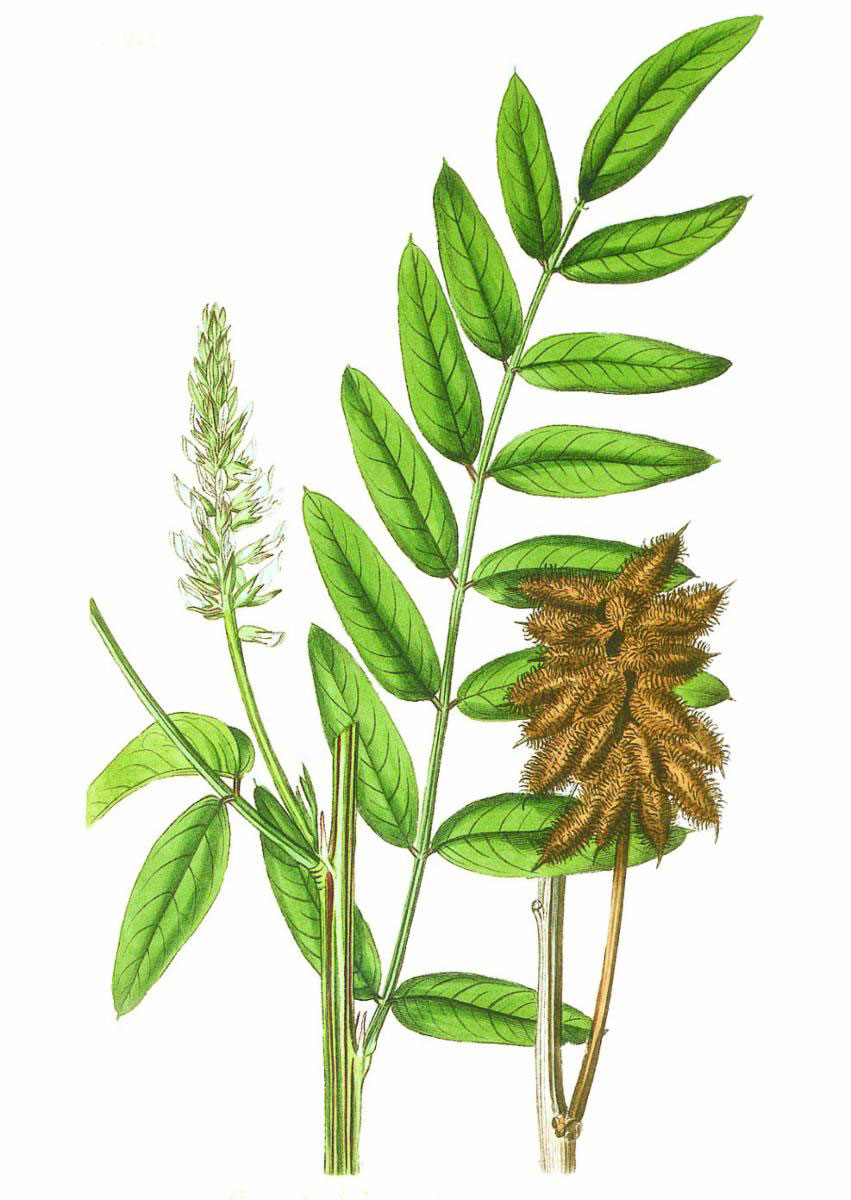 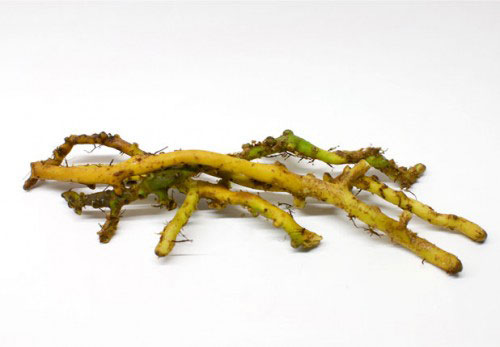 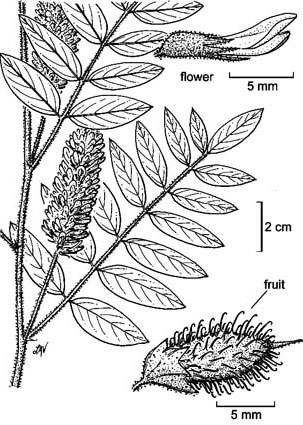 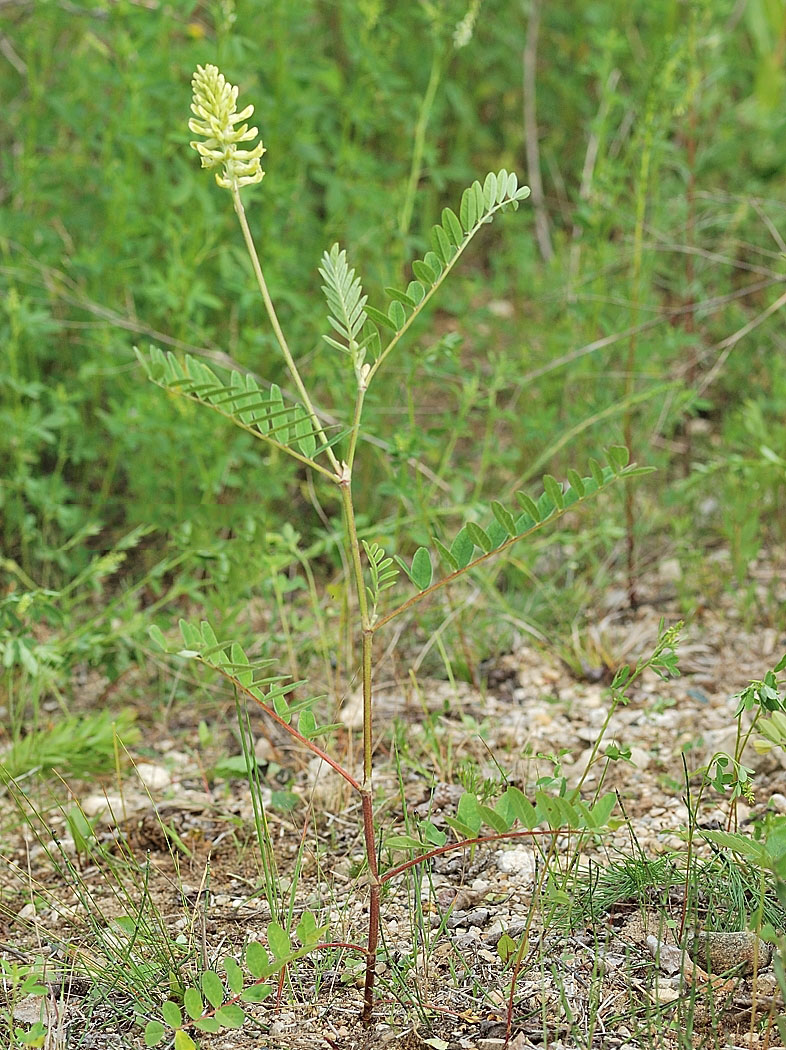 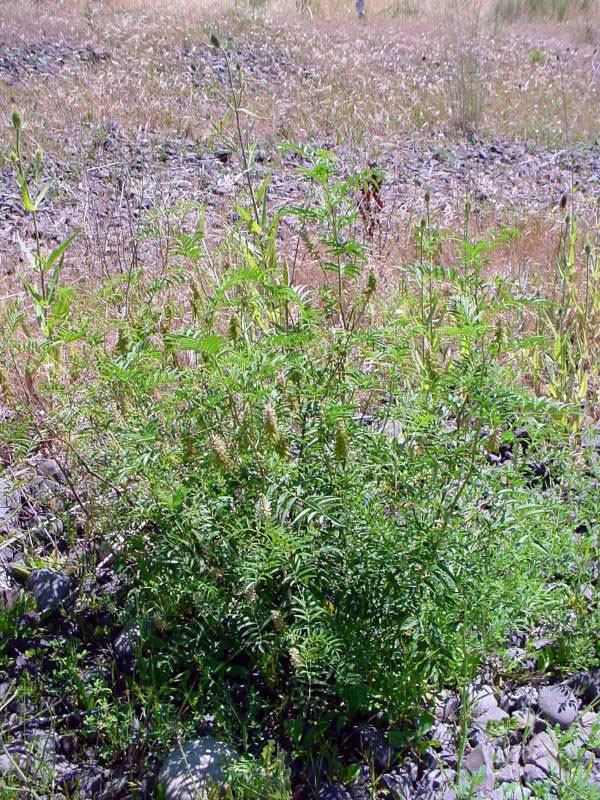 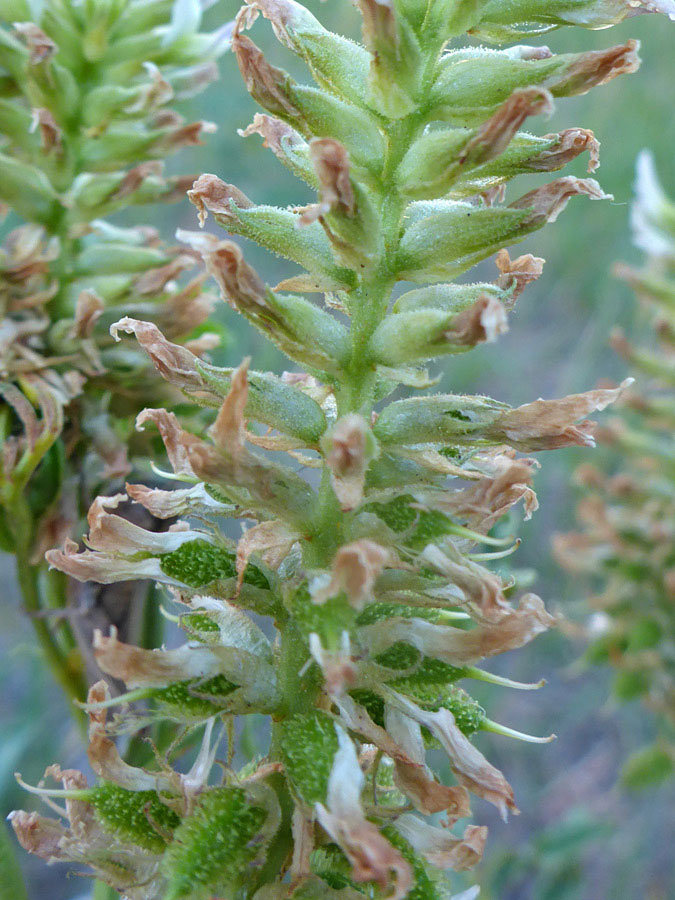 Each flower is replaced by an oblong green pod, white at the base, often pink towards the tip, about ½ to 1 inch long. Pods are covered with many stout, hooked brown spines which form a burr and contain a few seeds. This hooked pod assists the plant in dispersal since they stick to animal fur and are moved to new growing sites. As the pods ripen the color changes to coppery brown and then dark brown. The pods remain through the winter. Seeds are 0.08 to 0.12 inch (2-3 mm) long, green to reddish-brown, smooth and bean shaped.