Trending
You are at:Home»Herbs and Spices»Facts about the Yellow Cosmos 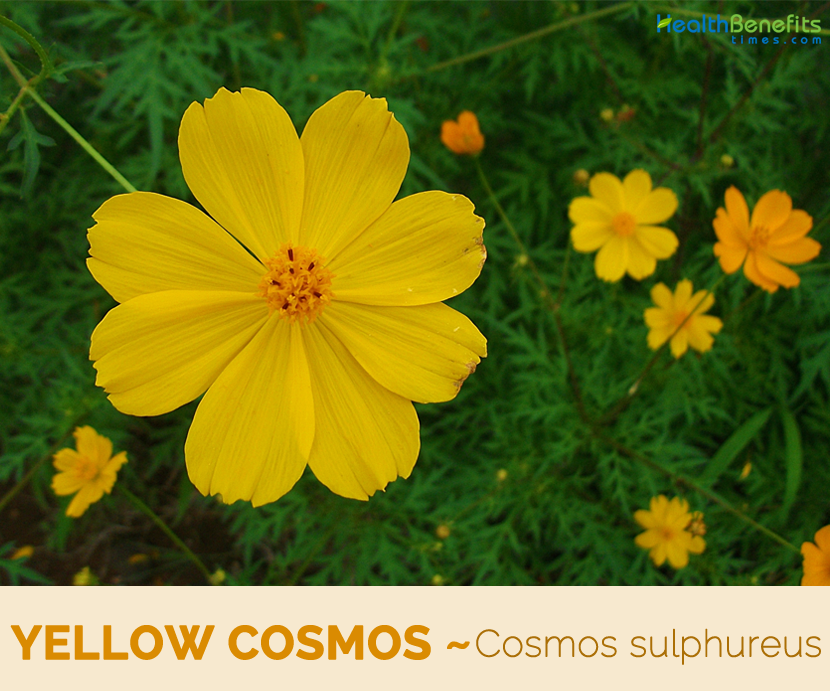 Cosmos sulphureus is also known as Sulfur Cosmos and Yellow Cosmos is considered a half-hardy annual from the Asteraceae or Compositae family (commonly referred to as the aster, daisy, or sunflower family). The plant is native to Mexico, Central America, and northern South America, and naturalized in other parts of North and South America as well as in Europe, Asia, and Australia. Other popular common names of the plant are Klondike Cosmos, Orange Cosmos, Sulfur Cosmos and Yellow Cosmos. This species of Cosmos is considered a half-hardy annual, although plants may re-appear via self-sowing for several years. Genus name comes from the Greek word kosmos meaning beautiful. Specific epithet means sulfur-yellow.

The plant is mainly popular in Korea and Japan, where it is often seen in mass plantings along roadsides, following an inventiveness followed by the Korean-Japanese botanist Woo Jang-choon. The plant was declared invasive by the United States Southeast Exotic Pest Plant Council in 1996. The plant is harvested from the wild for local use as the source of a dye and as a medicine. It is commonly grown as an ornamental, there are many named varieties.

Yellow Cosmos is an annual robust, erect herbaceous plant that grows about 1–7 feet (30–210 cm) tall with terete, slightly compressed, and sparsely pubescent to glabrescent and green stem. The plant is found growing in adventive lands along roadsides, in damp meadows, on brushy slopes, also cultivated and escaping as a garden weed and thrives in average, medium moisture, moderately fertile, well-drained soils. The plant can also tolerate poor and dryish soils. Avoid rich fertile soils because plants may grow too tall and flop over. Leaves are opposite, sessile or shortly petiolate; outline broadly ovate-rhomboid, 2–4 pinnately dissected with ultimate segments narrowly linear-lanceolate, 2.5 mm wide, apiculate and glabrous.

Inflorescence is terminal or axillary, solitary, 1.5 cm across, peduncle 1–2 cm long, outer involucral bracts narrowly ovate, acuminate, inner involucral bracts with membranous margins. Ray florets are obovate, intensely yellow to deep orange, apex denticulate. Disc florets with narrowly funnel- shaped corolla, yellow, orange-yellow, 6–7 mm. Some popular cultivars of this species are in many cases compact to dwarf plants with semi-double to double flowers and with flower colors ranging from orange to yellow to scarlet red. They come after spring to brighten the garden for the summer. Flowers are followed by 2 cm achene, hispid, blackish, spindle-shaped pappus absent or of 2–3 widely divergent awns. Plants will sometimes self-seed, mostly if seed drops on bare ground. Self-seeding may rise to the level of being aggressive in some climates and conditions. Seed may be harvested in fall for planting the following spring.

Cosmos sulphureus originates from Central America (Mexico) and northern South America, where it is still found in the wild. It has been introduced as an ornamental in many countries all over the world, in tropical Africa e.g. in Senegal, Cameroon, Sudan, Tanzania, Malawi, Zambia, Zimbabwe, Mozambique, Reunion and Mauritius. Sometimes it has escaped from cultivation and acts like a weed, e.g. in Tanzania, Malawi, Zimbabwe, the United States and Canada. Today it is found throughout the world due to its wonderful looking flower and other benefits.