Trending
You are at:Home»Herbs and Spices»Health benefits of Yerba Mansa 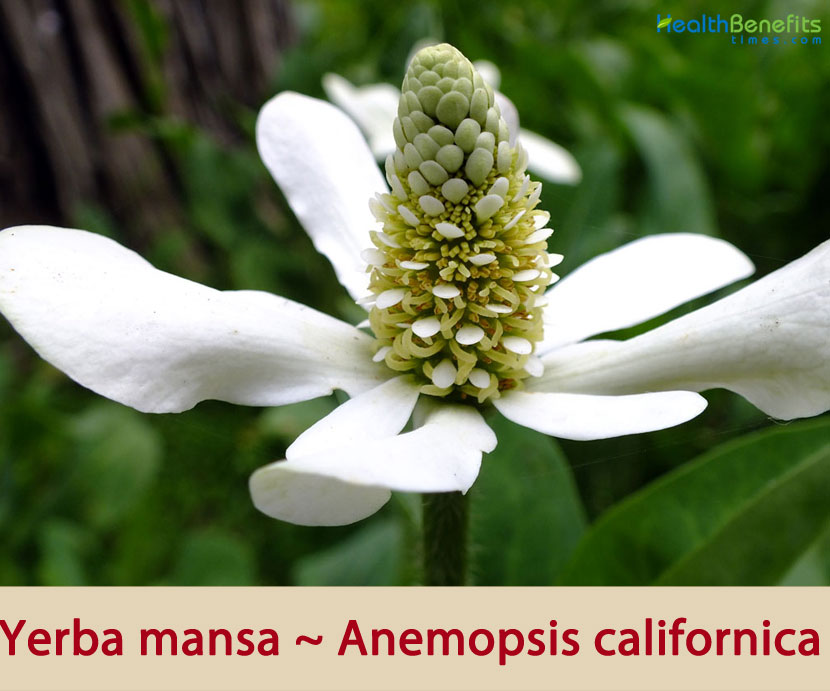 Anemopsis californica once known as Houttuynia californica and popularly known as Yerba Mansa or Lizard Tail is a legendary medicinal plant belonging to Saururaceae (Lizard’s-tail family). The true name once was Yerba Del Manso. It is the only species in the monotypic genus Anemopsis. The plant is native to southwestern North America in northwest Mexico and the Southwestern United States from California to Oklahoma and Texas to Kansas to Oregon and some of the states surrounding it. Mostly, it is found in the states of Arizona, California, Colorado, Kansas, Nebraska, New Mexico and Utah. Apart from Yerba Mansa it is also known as Lizard’s Tail, Queue de Lézard, Swamp Root, Yerba Mansa, Anemia California, Yerba Manza, Yerba Del Manso, Manso, Bavisa, Raiz del Manso, bear root and Apache beads.

The name Yerba Mansa has been debated, but the word “Yerba” in Spanish means herb and the feminine form of the Spanish word manso means tame, tranquil or calm. Technically, it translates from the Greek words for “tame” and “anemone”. But this suggests it has calming (taming) properties and it does not. Some believe the current name was shortened from yerba Del manso or “herb of the tame Indian”. A third explanation is that the word “manso” has been shortened from “remanso” which means “backwater”, making the original name yerba remanso or “herb of the backwater” which describes its habitat rather well. In the Southwest yerba mansa is considered by many to be an essential apothecary remedy, a panacea, and a universally important herb of elevated stature. The plant was extensively used by the Native Americans to treat a variety of complaints, and was also occasionally collected for use as a food. It is little used at present. It is sometimes grown as an ornamental in gardens.

Yerba Mansa is a unique-looking, low growing, stoloniferous, herbaceous, perennial creek side plant producing a clump of unbranched stems 8 – 80 cm tall from a stoloniferous rootstock. The plant can spread at the roots and form extensive colonies. The plant normally grows about 30 cm (1feet) tall and 60 cm (2 feet) wide. The plant is found growing in wet, especially somewhat alkaline or saline marshy places, creeks, damp, boggy areas, and tolerates both salinity and alkalinity. It can be found throughout the Western United States living near hot springs, especially if there is alkaline mire nearby. Yerba Mansa needs moist soil, so best to plant in streambeds, seeps or other damp areas. It goes dormant and mostly disappears from late summer to early winter, and re-sprouts from the roots in late winter. The white roots of this plant are long and threadlike. When young the roots are brittle and become corky and develop bark that covers them when they mature.

The fleshy, deep green leaves occur as a basal formation. Leaf blades measure about 3 to 20 cm (1 to 8 inches) long and are elliptic to oblong, sometimes the base is cordate. The petiole measures 2 to 40 cm (0.7 to 16 inches) long. Leaves are generally sub sessile to clasping.

The leaves of yerba mansa have a shade of blue and they bear resemblance to those of spinach. However, unlike the spinach, yerba mansa leaves are heavier as well as thicker, while they feel cool and smooth when touched. During the fall, the leaves of this herb develop reddish and black spots and usually they die completely or wither away in winter.

In early spring (February to April) numerous tiny white flowers are borne on a cone which is surrounded by 4 to 9 large white spoon-shaped bracts that look like petals. As it matures, the visible part of the plant develops red stains, eventually turning bright red in the fall.

Yerba mansa blooms have snow-white hue with yellow stamens and pistils that are covered in white bracts (petal-like modified leaves). These flowers appear in conical one-inch clusters. The flowers of this low-growing plant usually bloom in spring or the middle of summer.

The blooms easily become desiccated producing reddish-brown spiky seedpods that remain on the plants for many months. 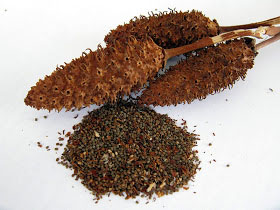 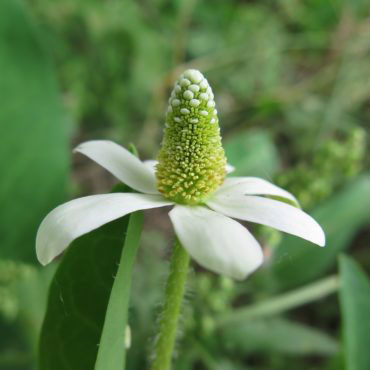 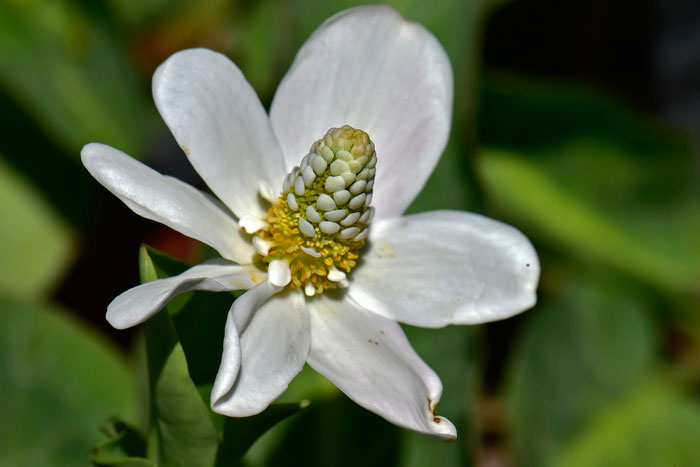 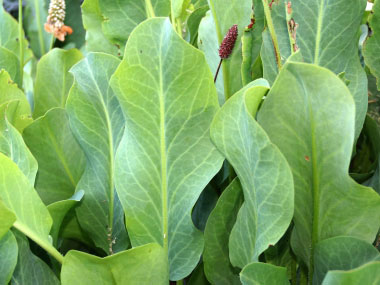 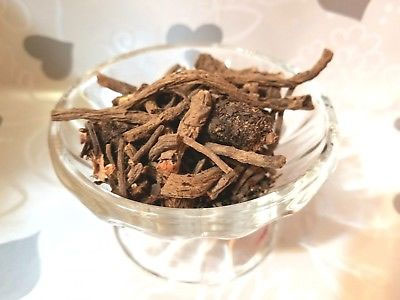 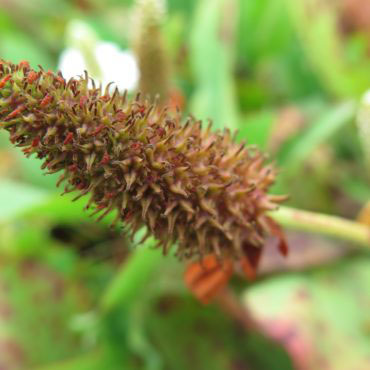 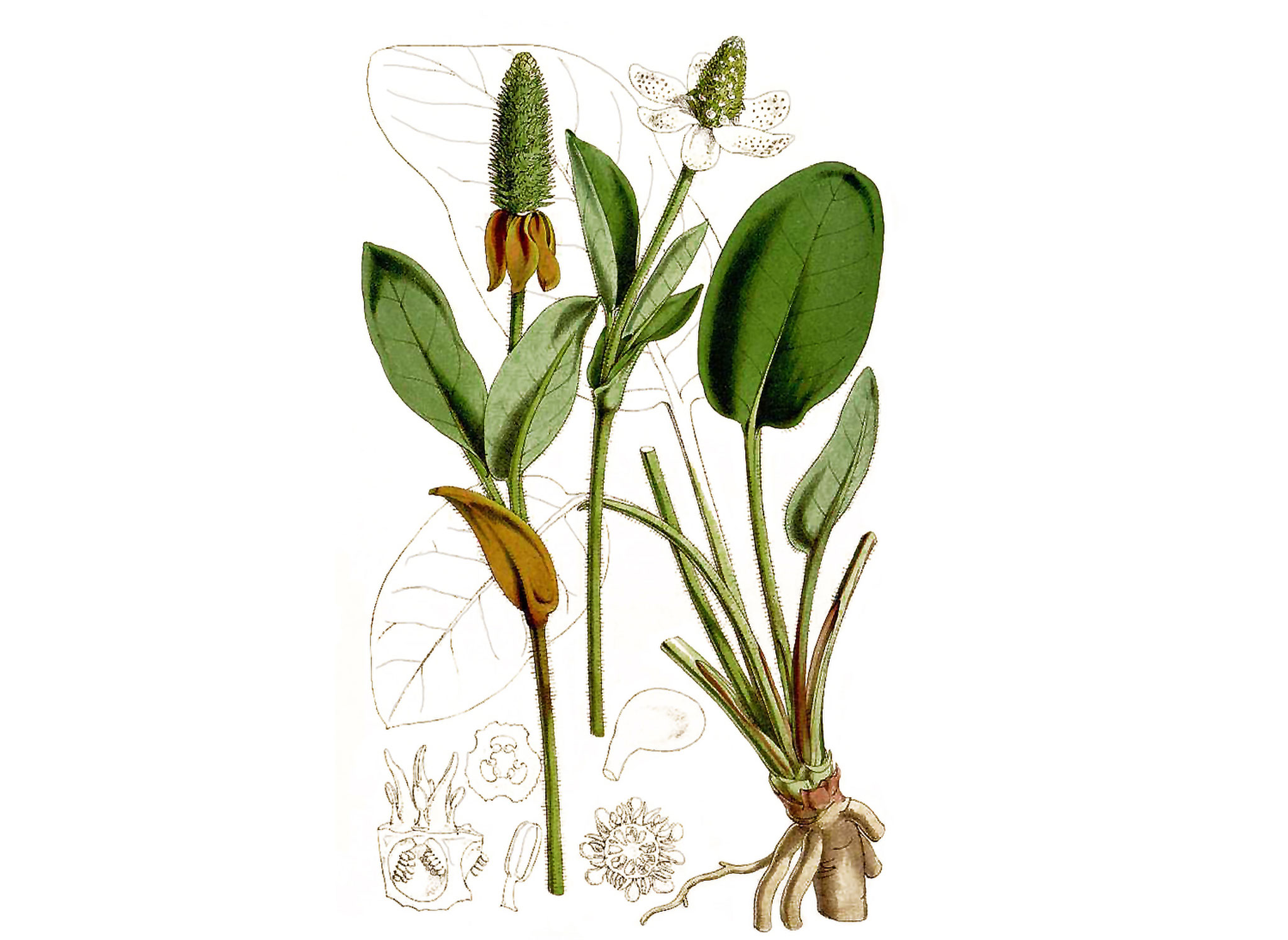 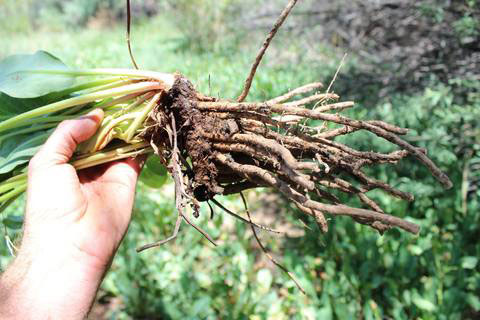 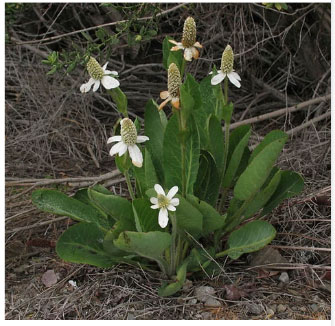 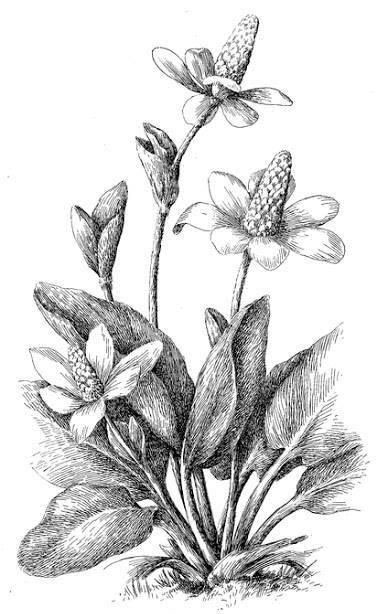 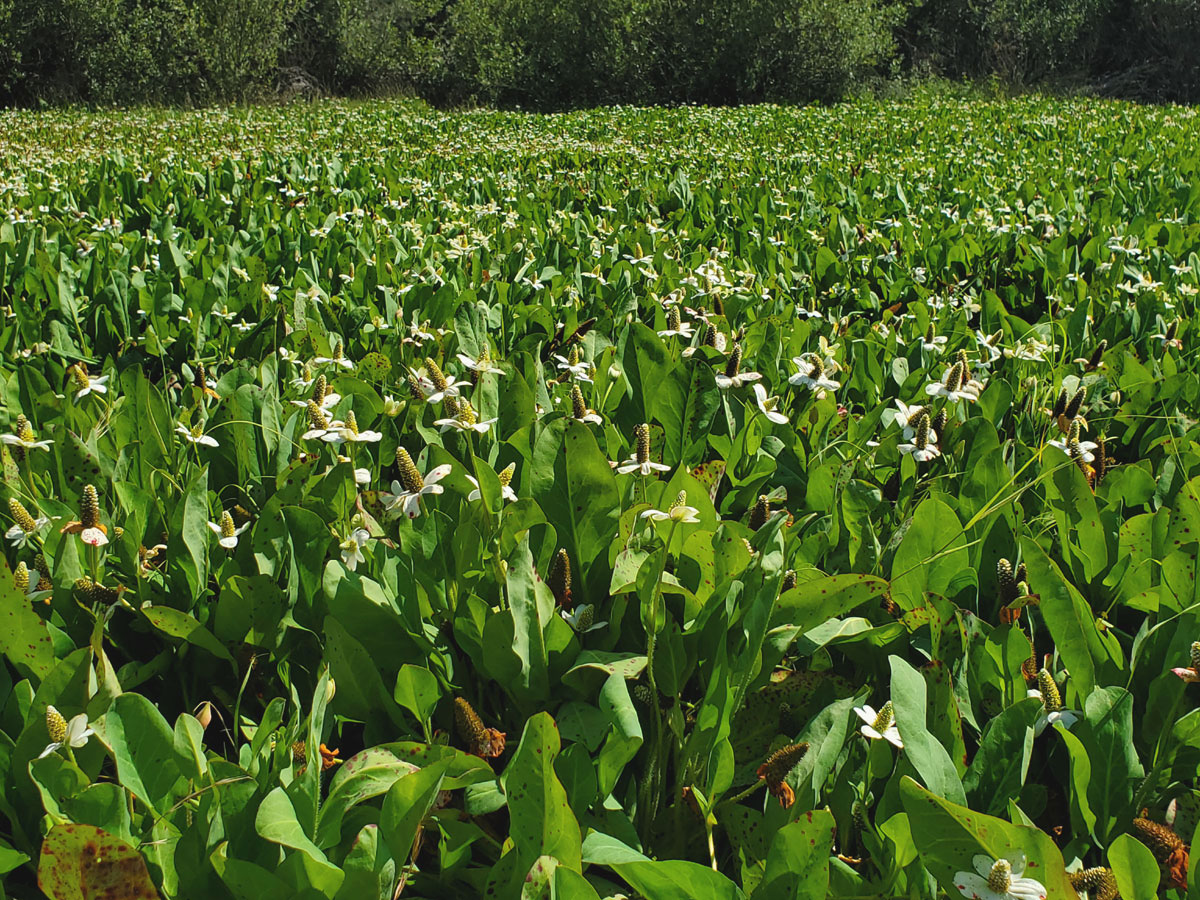 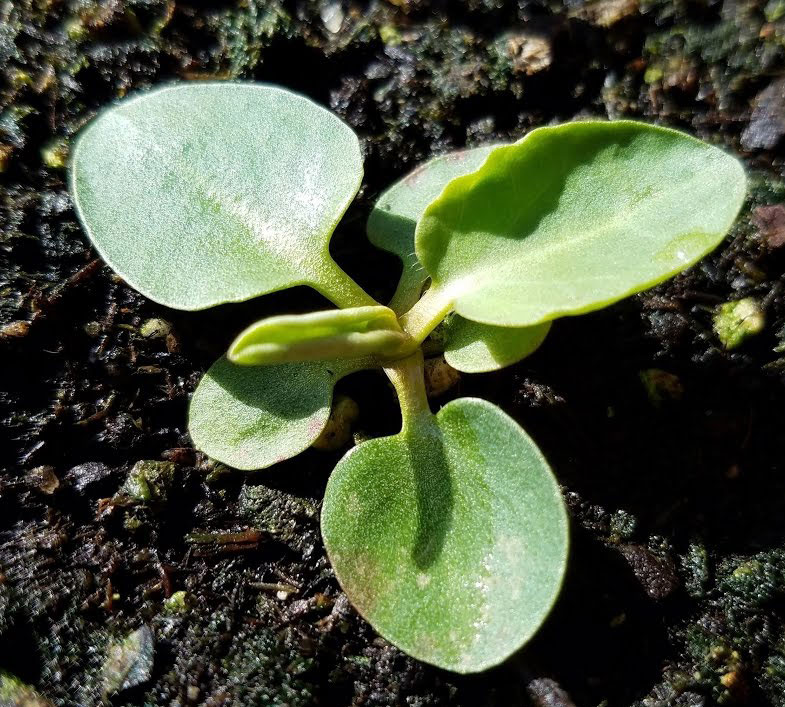 Current research has suggested that water, alcohol, and ethyl acetate extracts of Yerba Mansa (all plant parts, but especially the roots) prevent the growth and migration of certain types of cancer including two breast cancer cell lines, HCT-8, and colon cancer cells. Including it in your daily regimen can be considered quite beneficial.

Inflammation and a buildup of mucus in the chest can cause unpleasant symptoms like wheezing, sleep difficulties, and a sore throat. Congestion is also often accompanied by a cough that brings up phlegm. Yerba mansa tincture can loosen mucus and reduce congestion and coughing.

Digestive issues are so common that everyone experiences them at one point. There are dozens of reasons why you might get a tummy ache, constipation, or gas. Most causes aren’t serious and the symptoms pass quickly. Yerba mansa is a natural inflammatory it is warming and calming to the digestion, anti-nausea, and anti-microbial to many common stomach bugs.

It is a supreme herb for the digestive system, eases stomach cramps and nausea, helps expel gas from the bowel and prevent fermentation in the stomach.

Inflammation is your body’s protective response to injury or damage. It helps your natural healing and repair processes. A problem starts when your body is chronically inflamed.

Yerba mansa has anti-inflammatory properties and is supposed to function as a COX-2 inhibitor in a similar way that some arthritis medications function. It may also help relieve the pain associated with headaches, arthritic inflammation, and toothache