Trending
You are at:Home»Herbs and Spices»Traditional uses and benefits of Yew 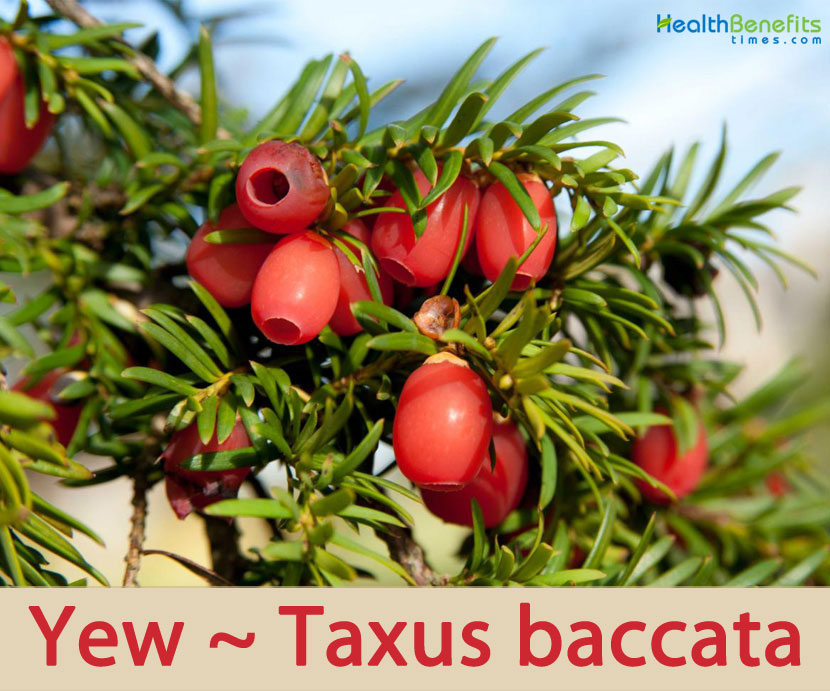 Yew Or Common Yew scientifically known as Taxus baccata is a species of evergreen tree in the Taxaceae (Yew family). The plant is native to western, central and southern Europe (including the British Isles), northwest Africa, northern Iran and southwest Asia. It is the tree originally known as yew, though with other related trees becoming known, it may now be known as common yew, English yew, Irish Yew or European yew. It is primarily grown as an ornamental. Most parts of the plant are poisonous, and consumption of the foliage can result in death.

Genus name is an old Latin name for yews. Specific epithet means fruit-bearing in reference to the showy red arils. No tree is more associated with the history and legends of Great Britain than the Yew. Before Christianity was introduced it was a sacred tree favored by the Druids, who built their temples near these trees – a custom followed by the early Christians. The association of the tree with places of worship still prevails.

Yew Or Common Yew is a long-lived, medium sized, evergreen, conifer tree that normally grows about 10–20 m (35–65 ft.) tall (exceptionally up to 28 m or 92 ft.), with a trunk up to 2 m (6 ft. 7 in) (exceptionally 4 m or 13 ft. 1 in) in diameter. The plant is found growing in hedgerows, woodland, churchyards, parks and shady field edges and can also be grown and used as hedging. The plant can grow on almost all soil types with sufficient drainage, typically on humus and base-rich soils, but also on dry rendzina and sandy soils with adequate moisture. The yew is intolerant of prolonged frost and cold although its tolerance varies by region and season. They are moderately drought tolerant and can cope with temporary flooding but are susceptible to long term poor drainage. Root systems are shallow with extensive horizontal roots. Twigs are light green in color, turning brown after several years. Buds are green with scales keeled. Bark is dark, thin, usually red-purple, and scaly coming off in small flakes aligned with the stem.

The leaves are flat, dark green, 1–4 centimeters (1⁄2–1+1⁄2 in) long and 2–3 mm (3⁄32–1⁄8 in) broad, arranged spirally on the stem, but with the leaf bases twisted to align the leaves in two flat rows either side of the stem, except on erect leading shoots where the spiral arrangement is more obvious. Leaves are dark green and shiny above, yellow or pale green below with 8-10 stomatal rows. The leaves are poisonous. Leaves are green all through the year but turn dull in the autumn color.

Flower of yew is dioecious, meaning that male and female flowers grow on separate trees. Flowers are visible in March and April from the leaf axils of the preceding summer’s twigs.

They are not true flowers but clusters of stamen. The male flowers appear in February/March and start as Brussels sprout like growths that turn into pale yellow sacs of small spheres before opening to drop its anthers and release lots of pollen.

The female flower is a single ovule covered in scale like bracts that when pollinated will develop over the summer into a seed surrounded in bright red sometimes yellow flesh. 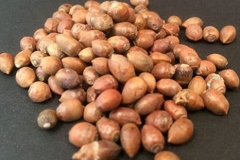 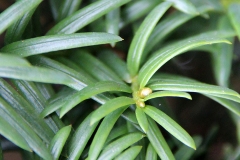 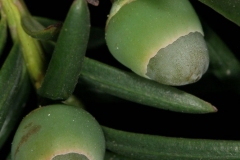 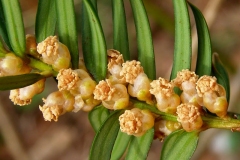 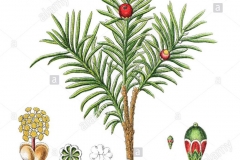 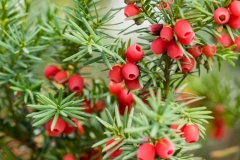 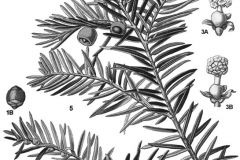 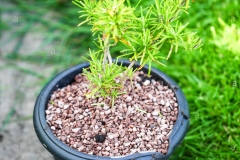 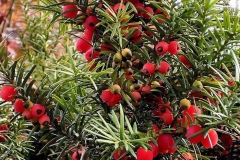 Although classified as a conifer, female yews do not produce cones, but instead produce red, ornamentally-attractive, berry-like fruits, each having a single seed 4–7 mm (3⁄16–1⁄4 in) long, almost completely surrounded by a fleshy red aril. The aril is 8–15 mm (5⁄16–9⁄16 in) long and wide and opens at the end. The arils mature 6 to 9 months after pollination, and with the seed contained, are eaten by thrushes, waxwings and other birds, which disperse the hard seeds undamaged in their droppings. Maturation of the arils is spread over 2 to 3 months, increasing the chances of successful seed dispersal. The seeds themselves are poisonous and bitter, but are opened and eaten by some bird species including hawfinches, greenfinches and great tits.[14] The aril is not poisonous, it is gelatinous and very sweet tasting. The male cones are globose, 3–6 mm (1⁄8–1⁄4 in) in diameter, and shed their pollen in early spring. All parts of this plant are poisonous if ingested. Taxine, the toxic chemical, is found in the leaves, bark, and hard part of the seed.

Traditional uses and benefits of Yew