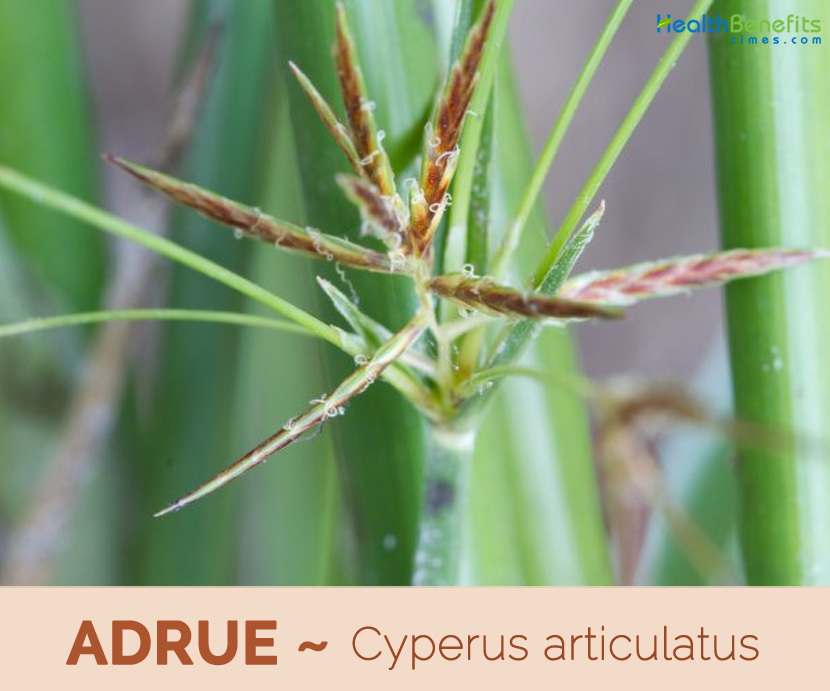 Cyperus articulates commonly known as Adrue, Guinea Rush, jointed flatsedge, priprioca, chintul  and piripiri is a species of sedge in the Cyperaceae plant family which include approximately 36 genera and about 128 species of Cyperus. Although native to the Amazon, piri-piri can be found in many other tropical areas and countries, including the southern United States, Africa, Asia, Australia, and across the South American continent. It can be found growing alongside the Nile River in Africa just as it grows alongside the Amazon River in South America.

It is used by the cosmetic industry, and increasingly as a flavoring for food. The root is used to make medicine. It is used to stop vomiting and to treat digestion problems including nausea, colic, and gas. It is also used as a calming agent (sedative).

Adrue is perennial rhizomatous sedge that grows over 6 feet (2 meters) in height. The plant is found growing in ponds, ditches, rivers, marshes, lakes and banks of canals of shallow water. It also occurs in still or weakly running water, sometimes alternatively fresh and salted water. It forms great reed marsh on temporary unflooded soils. It prefers moist or wet soil and can grow in water. It grows in clumps from dividing rhizomes which are about 2 cm long and 1.5 cm in diameter. The stems are fibrous, cylindrical, hollow and can be as large as 3/4 of an inch (2 cm) in diameter at the base. The stem narrows as it grows upward turning into spiked blades of shiny grass, which range in color from bright yellow-green to dark forest green, and can project a purplish inflorescence under the right lighting conditions. During the summer season, the grass produces many tiny white flowers at the top of the stalk, which has been termed as being similar to the tiny white flowers produced by wheat grass.

Its leaf blades are completely absent and it has scale-like involucral bracts measuring less than 15 mm long. The anthers are 1.0-1.5 mm long and the floral glumes are 2.25 to 3.5 mm in length. Piri-piri stems have sometimes been used like reeds in basket-making and other crafts by the locals in the Amazon.

Traditional uses and benefits of Adrue