Trending
You are at:Home»Herbs and Spices»Facts and benefits of Pheasant’s Eye 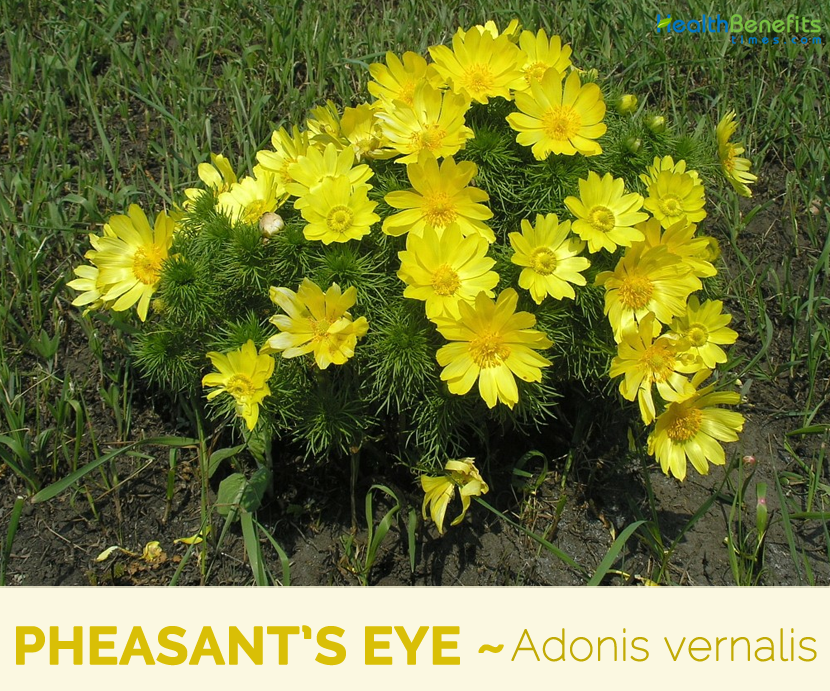 Adonis vernalis, known variously as pheasant’s eye, spring pheasant’s eye, yellow pheasant’s eye and false hellebore, Adonis, Sweet Vernal, Oxeye, Red Morocco and Rose-a-Rubie, is a perennial flowering plant in the buttercup family Ranunculaceae. The herb is native to dry meadows and steppes in Southern Europe and to Siberia and Labrador. Isolated populations are found from Spain in the west across Central Europe with fine examples in Valais, Switzerland, and southern Europe, reaching southern Sweden in the north, with its main area of distribution being the Pannonian Basin and the West Siberian Plain.

Pheasant’s eye is an herb. The parts that grow above the ground are used to make medicine. Even though pheasant’s eye is considered a very poisonous plant, some people use it for heart conditions including mild heart failure, irregular heartbeat, and “nervous heart” complaints. Pheasant’s eye is also used for cramps, fever, and menstrual disorders.

Pheasant’s eye is a perennial flowering plant that grows about 20 to 40 cm high with a sturdy, black-brown rhizome. The plant is found growing in grasslands, right-of-ways, waste areas, and in alfalfa or hay producing ground. The plant prefers moist, well-drained soils but is modified to seasonally dry calcareous soils also. Stem is simple or branched and longitudinally grooved, soft and weak. Leaves are simple and alternate with blades two or three times pinnately dissected into linear segments. Pheasant’s eye is a very beautiful and distinctive plant when it is in flower, and the finely divided foliage makes the plant easy to recognize even when not in bloom.

The erect, solitary, terminal flower is 4 to 7 cm in diameter and the 5 broad-ovate, downy sepals are half as long as the petals. The 10 to 20 petals are narrow, wedge-shaped, simple or finely serrated at the tip. They are 20 to 40 mm long and lemon-yellow, splayed, glossy, reddish on the outside or greenish-tinged. There are numerous stamens and carpels. Flowering normally takes place from March to May. The beautiful yellow flowers are hermaphrodite (have both male and female organs) and are pollinated by bees, flies, and beetles. The plant is self-fertile. The flowers turn constantly toward the sun and close every night. They stay also closed in cloudy and rainy weather.

The small fruit forms a globose capitulum. The fruit is tomentose, wrinkled, laterally veined and keeled with a sideways-facing, hook-shaped beak. The fruit are arranged on the spindle-shaped, oblong receptacle. Seeds usually ripen from May to June and are spread by ants. The medicinal part is derived from the aerial parts of the herb, which are collected during the flowering season and dried. The plant is poisonous, containing cardiostimulant compounds, such as adonidin and aconitic acid. In addition, it is often used as an ornamental plant.

Mode of Administration: Comminuted herb and preparations thereof for internal use.