Trending
You are at:Home»Vegetables»Alfalfa – Medicago sativa 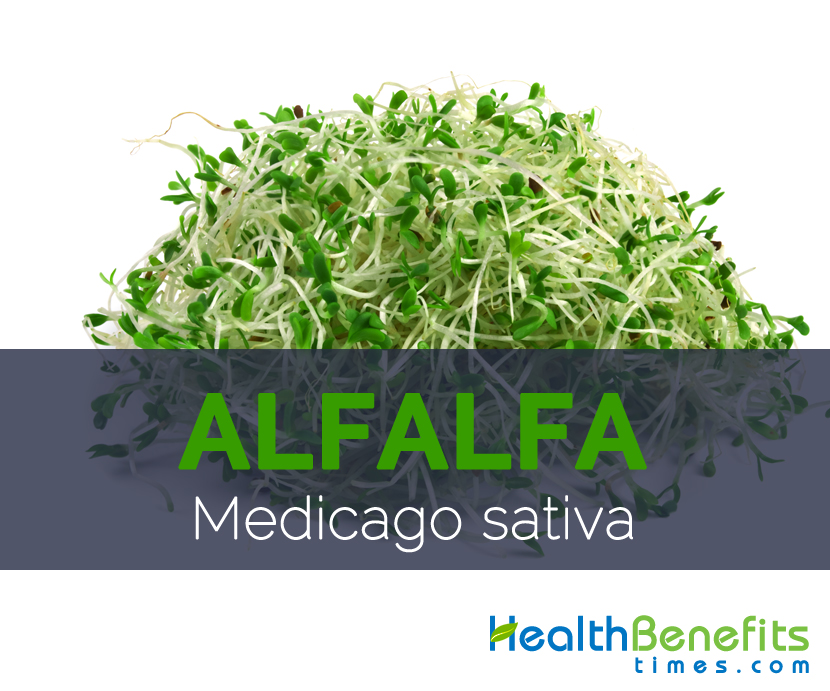 Alfalfa, also named lucerne (Medicago sativa) is an important forage crop in many nations throughout the world. It is a perennial flowering plant in the pea family Fabaceae grown as an important forage crop in several countries. The term alfalfa is derived from Arabic, exactly the phrase al-fac-facah, which accurately means “Father of all foods” because it is rich in crucial nutrients. It is used for grazing, hay, and silage. It is widely cultivated glabrous perennial native to southwestern Asia, was first cultivated in Iran. Common Names of Alfalfa includes lucerne, purple alfalfa, luzerne, common purple lucerne, snailclover, purple medick, common purple lucerne, common lucerne and yellow alfalfa. M. sativa, M falcate, Weevelchek, Saranac, Team, Arc, Classic, and Buffalo are some popular cultivars of Alfalfa. It has been cultivated as livestock fodder since at least the era of the ancient Romans and Greeks.

Alfalfa is a perennial legume that normally lives 4-8 years, but can live more than 20 years as well, dependent on climate and variety. Erect or ascending, glabrous perennial flowering plant grow to the height of 1 m (3.3 ft.) tall and is found growing in wide variety of climatic environments from cold temperate to warm sub-tropical. It prefers friable, rich, well-drained loamy soil along with loose topsoil supplied with lime. It has deep root system, sometimes extending more than 15 m (49 ft.). Stems are decumbent or erect up to 1 m high, glabrous or hairy in the upper parts along with several branches. Leaves are usually alternate compound and are olive-green and trifoliate, 10-45 mm long and 3-10 mm broad; pubescent on lower surface, glabrous on upper surface, coarsely toothed. Leaflets are usually narrow, oblong to ovate or obovate, 8–28 mm x 3–15 mm, glabrous on upper layer, somewhat pubescent on lower surface. Flowers are hermaphrodite, about 1/3″ long; consist of 5 petals that are lavender or purple, 10 stamens, a single pistil, and a green calyx. Flowering normally starts from July to September.

As soon as flower fall, curled pod is developed which is 1/3″ in length from one end to another, 3–10 mm in diameter, indehiscent, containing 2–6 seeds. Pods are normally green and turn to brown as soon as they mature. Seeds are yellow, castaneous or brown colored, ovoid, irregularly cordate or reniform and is slightly bland in taste. Pods can be harvested from Jul to September.

Alfalfa is said to have been originated in southwestern Asia, first cultivated in Iran and presently has a worldwide distribution because of its popularity as agriculture species. Alfalfa is extensively grown all through the world as forage for cattle, and is most often collected as hay, but can also be made into silage, grazed, or fed as greenchop. During 1736 it was introduced to Georgia, but was not popular till 1850. It was grown in all 50 states and is widely planted in Canada.  Although it originated in Asia, it is now exceptionally common in the USA, Europe, and Canada.

Scientific research done to test the effects of alfalfa on cardiovascular disorders, discovered dietary alfalfa increased levels of high-density lipoprotein (‘good’ cholesterol); a reduction in the build-up of fat in the arteries was also noted.

Research done in Budapest to test the effect of alfalfa leaf extract on diabetic patients concluded that one gram of Alfalfa two times a day over 16 weeks, displays  24% drop in blood cholesterol levels right after eight weeks, which stabilized in the following months. This research concludes that regular consumption of Alfalfa will help to reduce the blood cholesterol level effectively.

Alfalfa is extremely beneficial for People suffering from arthritis. Alfalfa help to neutralize the uric acid that is in their systems, thus pain is relieved. The trace minerals present in alfalfa assists the body to repair and rebuild joint tissue. Alfalfa is effective in the treatment and management of muscle aches and bursitis.

Alfalfa is loaded with Vitamin K which is essential to regulate blood clotting, due to the role in amalgamation of prothrombium. Blood clotting comprises of a set of molecules that are constantly circulating through the bloodstream. Vitamin K present in helps in the regulation of blood clotting by carrying calcium around the body. One cup sprouted alfalfa consists of 30.5 µg Vitamin K which is 25.42% of the daily recommended value. Vitamin K helps in improving blood disorders named myelodyplastic syndromes.

Alfalfa relate to its anti-inflammatory actions which assist in decreasing the symptoms of arthritis. Copper present in Alfalfa work as a home cure for arthritis; store water in a copper container overnight to gather copper traces. These are helpful in strengthening the muscular system; therefore drink the water as soon as you wake up in the morning. You will feel energized and active for entire day, because your metabolism got good source of copper for its daily procedures.

Iron is an essential protein component for metabolism, and the human body needs iron to produce red blood cells. It is also vital element for muscle health. It can be found in the muscle tissues and assists to provide the source of oxygen essential for contraction of the muscles. Without iron, muscles will lose their tone and elasticity. Alfalfa intake is essential to fulfill iron requirement of the body as it include 0.96 mg of iron which is 12% of the recommended value.

Alfalfa intake helps to reduce body fatigue and tiredness and sets the metabolic actions of the whole body on the right way. It means vitamin K present in Alfalfa has the capacity to increase stamina on the body to perform several tasks in efficient and healthy way.

Other Traditional uses and benefits of Alfalfa