Trending
You are at:Home»Vegetables»Artichoke Facts and Health Benefits 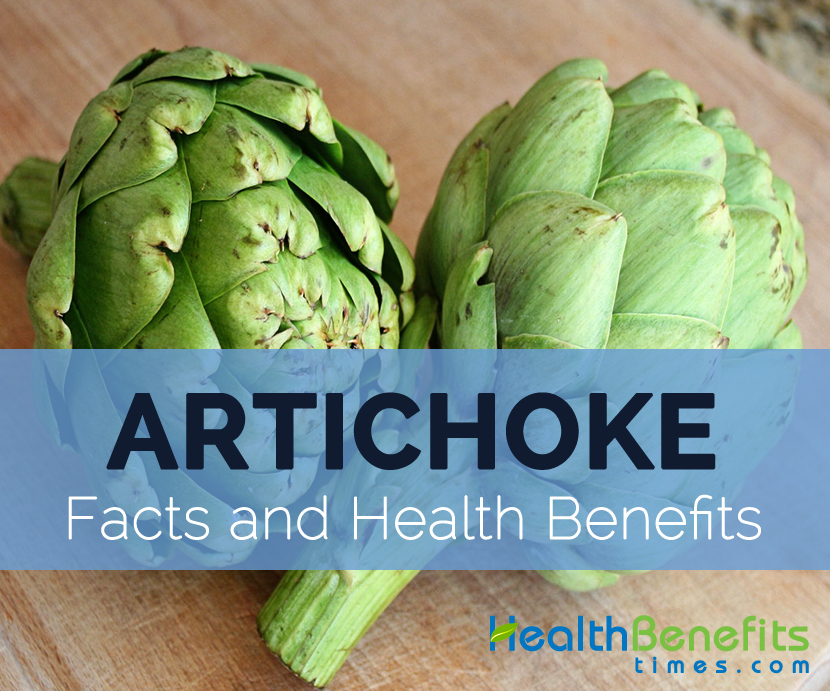 Artichoke is an erect, spiny, biennial or perennial plant growing to 1.4–2 m (4.6–6.6 ft.) tall with ovate – lanceolate, gray green leaves arranged alternately having the length of 30–50 cm and width 10–20 cm. The flower buds with diameter 8–15 cm (3.1–5.9 in) are the edible portion of the plant. The flowers are purple upto seven inches in diameter which flowers from June-July. The stems are 0.6-1.2 m high. It is adapted to warm and dry climates and prefers well-drained soil. The plant lives upto two years.

The fruit of Artichoke is obovate, thick with 7.5-8 cm as a diameter. It possess unique nutty flavor and resembles the taste of asparagus. Each fruit weighs about 150 gm. Artichokes are available in Europe and North America during spring, summer and in Middle East during fall.

Edible portions of the plant

The lower fleshy parts are consumed by steaming, boiling, frying, baking, stuffing, pickled, marinated, made artichoke dips or mixed into yoghurt. The young tender leaf stalks are also eaten. After cooking, the bracts are removed and eaten by dipping in mayonnaise, butter, hollandaise, lemon juice, aioli or other sauces. The chards and flowering stems are eaten braised, blanched or fried. The bitter young leaves are consumed by cooking. The dried flowers are substitute for coagulating/ curdling milk.

Artichoke is rich in antioxidant such as polyphenols, quercetin and rutin which enhances the immune system to counteract free radicals and natural byproducts which leads to various diseases and health ailments such as heart disease and cancer. Vitamin C in Artichokes also prevents the health conditions such as fibrosis mucositis and breast cancer. The studies have shown that the leaves extract of Artichoke reduces the risk of breast cancer, prostate cancer and leukemia. (1) (2) (3)

Artichoke is rich in mineral such as potassium which is essential for the functioning of various organs. Potassium neutralizes the excess sodium effects which is the cause for blood pressure. It acts as a vasodilator. Artichokes prevent the complications related to blood pressure in diabetic patients. The risk of heart disease and heart attack could be reduced by lowering the blood pressure. (5)

Artichoke possess high mount of dietary fiber which assists in the functions of digestive system. It keeps the bowel movements regular by adding bulk to the food which reduces the chances of constipation, intestinal cancer, cramps, bloating, discomfort and excess flatulence. Fiber eliminates the LDL cholesterol from arteries which lowers the risk of heart disease. Artichoke eases the inflamed gallbladders. Artichoke enhances the secretion and production of gastric juices, bile, which aids in smooth digestion. (7) (8)

Artichoke reduces the blockage and eliminates toxin from the body which makes it a great cure for hangover. People take some leaves of Artichoke after the heavy drinking.

As Artichoke possess huge amount of folic acid, it prevent the neural tube defects in the new born. Folic acid is important during pregnancy because the process neural tube closure in vitro require some amount of folate to occur. (9)

Artichoke is rich in vitamins and minerals such as phosphorus, magnesium and manganese which are essential for increasing the density and health of the bones. It also lowers the risk of osteoporosis. (10)

Manganese and Magnesium are essential for the process of metabolism which is found in adequate amount in Artichokes. Magnesium is essential for improving the calcium intake, protein synthesis process and strengthens bones. Magnesium impacts the metabolic rates of amino acids, cholesterol and carbohydrates.

It acts as a vasodilator which transports the oxygen to the brain for elevated cognitive function. Artichoke also possess adequate amount of phosphorus. The reduction of cognitive ability is associated with the deficiency of phosphorus. (11)

An allergic reaction such as intestinal gas and allergic reactions might be experienced by the people who are sensitive to chrysanthemums, ragweed, marigolds and daisies. Artichokes can worsen obstruction of bile duct by increasing flow of bile, which is naturally released by the liver. With the increase in bile flow, gallstones may be worsening.

Artichokes is rich in vitamins, fiber, minerals but possess lower amount of cholesterol and saturated fat. It is loaded with Vitamin C, riboflavin, thiamin, folate, niacin, Vitamin K and Vitamin B-12, B-6, E, A, D. It also includes minerals such as iron, calcium, sodium, zinc, manganese, potassium, zinc and phosphorus.

Artichoke is edible flower bud originated in Mediterranean which is also known as Ankinara in Greek. It was used by ancient Greeks and Romans for medicinal properties. The beautiful pink or purple flowers develop from the edible buds which is composed of compactly arranged triangular scales.