Trending
You are at:Home»Herbs and Spices»Chrysanthemum facts and health benefits 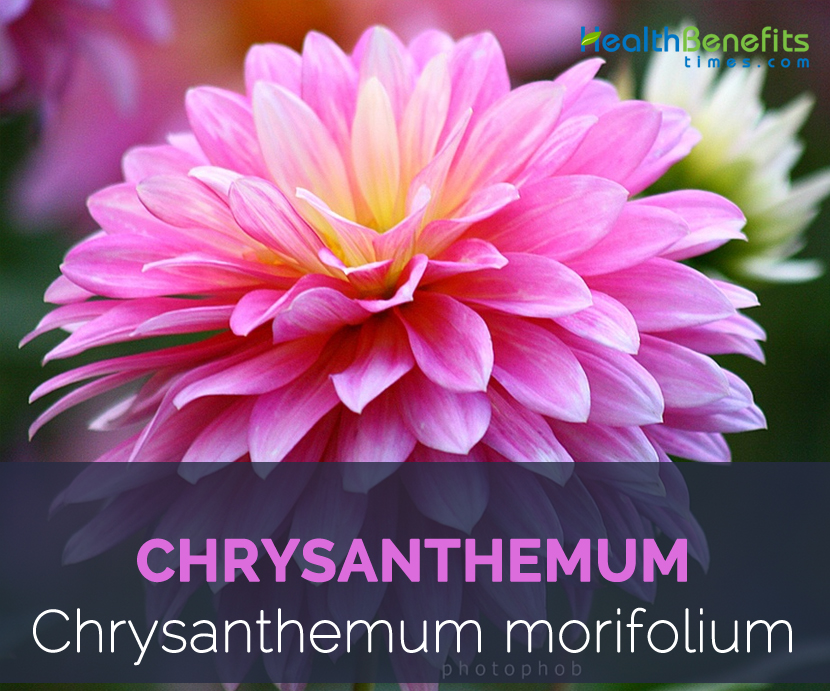 Chrysanthemums occasionally called mums or chrysanths are flowering plants of the genus Chrysanthemum in the family Asteraceae. They are native to Asia and northeastern Europe. Most species originate from East Asia and the center of diversity is in China. In China it is mostly produced in Henan, Zhejiang, Anhui, Shandong, Sichuan, Hebei and other provinces. Majority of them are cultivated but few of them are wild. Name “chrysanthemum” is derived from the Greek words chrysos (gold) and anthemon (flower). The name was given by a Swedish naturalist Carolus Linnaeus, who is known as the father of modern taxonomy. It is commonly known as Ju Hua in mandarin and Flos Chrysanthemi in Latin and is one of the best varieties for making chrysanthemum flower tea. Chrysanthemum is a valued ornamental flower that has been grown for more than 3,000 years. Now over 3,000 varieties have been found. This perennial autumn bloomer is a versatile plant most often used in flower beds or containers.

Chrysanthemum is an herbaceous perennial plant, 60-150 cm high. It is mostly found growing in mild cool climates and prefers fertile, moist, well-drained slightly acidic soil rich in organic matter in full sun. Erect stems are pubescent and branched or unbranched. Leaves are alternate with small handle; leaf blade is ovate to lanceolate, 5 to 15cm long, pinnatifid or pinnatilobate along with cuneate base. Capitulum is 2.5 to 20cm in diameter and in various sizes. Single or a few capitulums gather on the top of the stems. Ray florets are yellow to variously colored (pink, white, orange, lavender, purple, red, rust, bronze, olive-green) in cultivars with entire or triserrate oblong ligules. Disc florets yellow to pale greenish-yellow with 5-toothed corolla tube. Fruit of the plant is known as Cypsela which is obovoid, 1.5–2 mm, and light brown colored. Flowering time is from September to November.

Chrysanthemum is native to China. In China it is mostly produced in Anhui, Zhejiang, Sichuan, Hebei, Henan, Shandong and other provinces. Most of them are cultivated but there are some from the wild.  It has been introduced as an ornamental toward Europe, North and South America, Asia, Australia and South Africa. Nowadays it is grown all over the world due to its ornamental flower as well as higher nutritional value.

Chrysanthemum Flower (Chrysanthemum morifolium) is consumed as a tea to nourish the Yin and as an herb to remove wind and occasional heat (irritation) from several parts of the body in normal, healthy individuals. For thousands of years it has been used in Asia. Chrysanthemum Flower is renowned for treating different health problems. Mentioned below are the benefits of chrysanthemum tea:

Chrysanthemum tea acts as a coolant and helps in dealing minor rashes on the skin caused due to heat etc. You can apply the powdered form of this tea externally on the impacted area or drink it two to three times a day till symptoms disappear. It has amazing anti-inflammatory qualities that treat the swelling due to bee stings, broken muscles and allergic reactions too.

4. Providing the Body with Vitamin B

The Memorial Sloan-Kettering Cancer Center claims that, due to chrysanthemum tea, the passage of blood in the coronary arteries is improved. Certain health problems like dizziness, insomnia and headaches are cured by the use of chrysanthemum tea. Because of antibiotics present in it, chrysanthemum tea is quite beneficial against chest pain.

According to the City University of New York, chrysanthemum can also be used to remove toxins from the blood. Regular consumption of tea helps in the purifying blood. For getting rid of insomnia, you can take a cup of chrysanthemum tea. Chrysanthemum flowers, cinnamon, ginseng, and honey suckle are mixed together and they provide body with warmth and creates a kind of balance in the body. However, it is best to consult with the doctor before taking it for cleaning blood.

Research also supports that chrysanthemum is beneficial for treating cardiac and blood pressure problems. However, if you are taking other medications along with chrysanthemum, consult your doctor before taking chrysanthemum tea. Also for more serious conditions, it is suitable not to take these drugs without the consultation with your doctor.

Other traditional Uses and benefits of chrysanthemum

How to make Chrysanthemum tea

Chrysanthemum flowers have been used in traditional Chinese medicine for centuries. It may help increase blood flow and have anti-histamine, antibacterial and anti-inflammatory properties. However, chrysanthemum tea is light and refreshing, often served in the balmy summer months.

Chrysanthemums may cause contact dermatitis in some people and red, itchy patches of skin characterize this condition. This skin problem occurs due to chemical component in either the plant that irritates the skin or because the individual is allergic to the plant.

People suffering from skin sensitivity may also experience photosensitivity if their skin is first exposed to chrysanthemum and then to ultraviolet light.

Individuals using drugs for HIV/AIDS, cancer and other inflammatory diseases must evade chrysanthemum products since these may negatively interact with the medicines and may prevent or intensify their effect on the body.